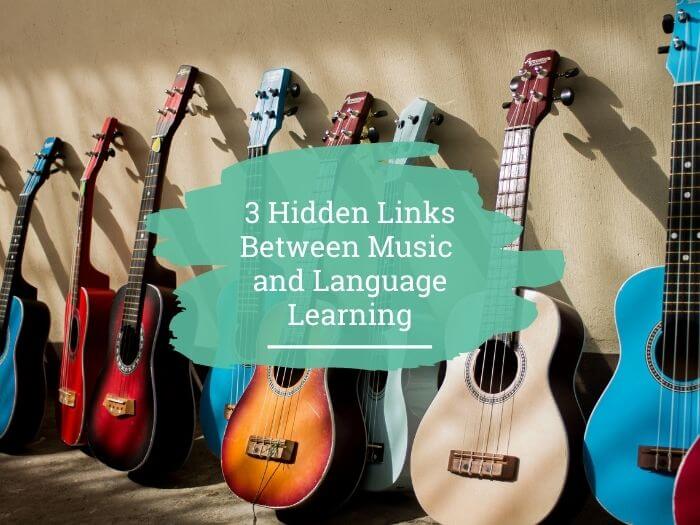 When I tell people I did a music degree, most people assume there is a link between music and language learning.

Being a musician must really help with learning languages!

For a long time, I never really thought about this.

But then it occurred to me

I've been a musician all my life and studied in one of the world's top conservatoires for 4 years. (I did a degree in jazz piano, in case you were wondering!)

If being a musician did indeed help me learn my 8 languages how would I know?

After all, I don't know what it's like not to be a musician.

Furthermore, if there were a connection between music and language learning, it's always struck me that there are no positive implications

The last thing people need is another excuse: It's alright for him, he's a musician! But me? No talent.

The Connection Between Music and Language Learning

In this article, I'm going to explore these three areas that connect language and music, based on my experience.

I should note that I haven't played music professionally for many years. I still play from time to time, but it's mostly for fun… and rarely in public!

If you're interested in learning songs as a language learning method, read this article.

Whether you're a musician or not, if you want to be a successful language learner, using the right method is key.

1. A Musical Ear is Sensitive to the Sounds of Language

I've often been told I have a good accent in the languages I speak.

Well, one of the key principles of learning pronunciation in a foreign language is this: In order to produce a sound accurately, you must be able to hear it accurately first.

In other words, you can't have a good accent in a foreign language unless you can pick up on the nuances of the language when you listen to it.

In music, ear training and aural tests are a central part of formal training from a very young age.

A common test I had as a kid, for example, was to listen to a melody sung by my teacher and replicate it immediately on the piano, or vice versa – all by ear, without ever seeing the sheet music.

Later, I would learn to harmonise chorales in the style of Bach, away from the instrument.

As a jazz musician, I became an expert at improvising; playing music in groups where there was nothing but a set of chords to go by.

Even now, if you play me a song on the radio, I can sit down at the piano and replicate it note-for- note without ever seeing the music.

It would be silly to suggest that such intense music training doesn't have some influence on my accents in the languages I speak.

There's another interesting aspect of this.

It's common for first-time language learners to feel silly or embarrassed when speaking a new language, due to the unfamiliarity of a different accent.

Think of an English person learning French, finding themselves needing to speak with a French accent for the first time, having previously only ever mocked French people speaking English with an accent.

Such a person will feel very weird inside when the shoe is suddenly on the other foot, and I think this accounts (at least in part) for those cases of people who appear to refuse to make any effort to do the accent in a language they're learning.

In my case, I've rarely experienced that.

As I tend to be so aware of the sounds of a new language, and of my own voice when I try to speak it, it feels totally wrong not to try to imitate it as closely as possible.

2. Musicians Know How to Practise

When you sit down to learn a new piece of music, there's a long road ahead.

The audience, of course, only ever gets to hear the finished product.

You might have found yourself listening to a classic music recital at some point and thought to yourself: How does she do that? What incredible talent!

Talented she may be, but you might also be shocked if you ever saw the inside of a practice room in a serious music college.

Yesterday, I was flicking through a book of Beethoven Sonatas and was suddenly reminded of the complexity of the pieces I used to learn.

A sea of black, dozens of pages, thousands of notes.

The first time you try to play such a piece, it doesn't sound great.

Even after a few dozen hours of practice, it still doesn't sound great.

First, you have to learn the notes. (All of them.)

Then, once you've learnt the notes, you have to interpret the piece in the right way, so it sounds good when you play it!

It is not easy.

Each stage of the process requires a different approach and takes a lot of discipline and patience.

Musicians know how to practice.

They approach a difficult task with perspective.

They turn up, day after day, week after week, slowly taking something that was unfamiliar through a systematic process of familiarisation, practice and rehearsal.

Musicians don't expect to get it right the first time. They know it takes time, but that the rewards are there for those who persist.

The parallels with music and language learning are clear.

Whether it be a complex grammar point, a set of difficult vocabulary, or pronunciation that is difficult to get right

If you have a musician's temperament, you're comfortable with the difficulty facing you, and are up for the task.

You know that with regular practice everything gets easier. That's why the inconsistency villain is a real pain when he shows up.

Discipline is not a problem for you – you turn up every day because, well that's just what you do.

Now, in my music days, one of my big weaknesses was that I wasn't particularly disciplined at practising.

I had friends who were, and I was always envious.

They would improve far faster than me.

My language learning has also suffered from a lack of discipline (although I've learnt to make up for it in other ways).

However, despite this, I think my experience of music as a kid gave me a good, healthy perspective on practice.

It has helped me approach language learning with patience and perspective, without yearning for quick-fixes.

3. Learn to Perform & Be Ready for Anything!

You see, it's not enough to just learn a new piece of music.

In the practice room, if you slip up you can go back and pick up where you left off.

But you can't do that in a concert hall.

Practising the performance itself, to the point where you're confident enough to walk out onto a stage and perform it flawlessly in front of a critical audience

You need to uncover the mistakes you're likely to make at different points in the piece, and systematically eliminate them from the performance by careful, methodical practice.

In language learning, the stakes are rarely so high.

However, language learning is performance.

In fact, I have an introverted side to me, and my natural state is certainly not to perform in front of people!

(Although I've been told I give the opposite impression in my videos – the power of performance!)

So, I'm sure that my experience of performing music to audiences has helped prepare me for the difficult task of coming face-to-face with foreign people in foreign countries and doing my best to talk to them as an adult, despite only having a mediocre command of the language.

It's a bit like public speaking when you're not completely prepared

You step onto the stage, worrying about all the terrible things that could happen

But as soon as you start to talk, the concerns evaporate and you slip into performance mode.

Being a musician trains you to detach yourself emotionally from the situation.

You – the person – blend into the background.

At certain times, when speaking foreign languages, I've had the distinct feeling that it's a different version of me who's standing there, talking, in the moment.

As if I'm projecting a different persona.

I think this is what people mean when they ask the related question: Do you have different personalities in the languages you speak?

The answer is definitely yes, but there's an element of performance there that's impossible to deny, and I wonder if my musical training has enabled me to pull that off.

Who knows – but I think there's definitely something to it!

In this post, I've talked about three elements of musical training that seem to have parallels with learning a foreign language:

For me, language learning is a skill and an art form, not a subject, as it's usually presented in the education system.

To learn to speak a foreign language fluently, motivation, emotion, and self-discipline all matter just as much as the vocabulary and grammar you learn in the classroom.

And to that extent, I think there is a lot to be learnt from the path of a musician. Music and language learning are definitely connected.

But, what if you're not a musician? Or have no musical training?

Are you doomed to a life of mediocre language learning?

Of course, the answer to that is a resounding no.

The skills and behaviours you need to learn a language successfully just like music can all be learnt.

And the best way to learn is with regular study, self-awareness, humility and the willingness to make mistakes.