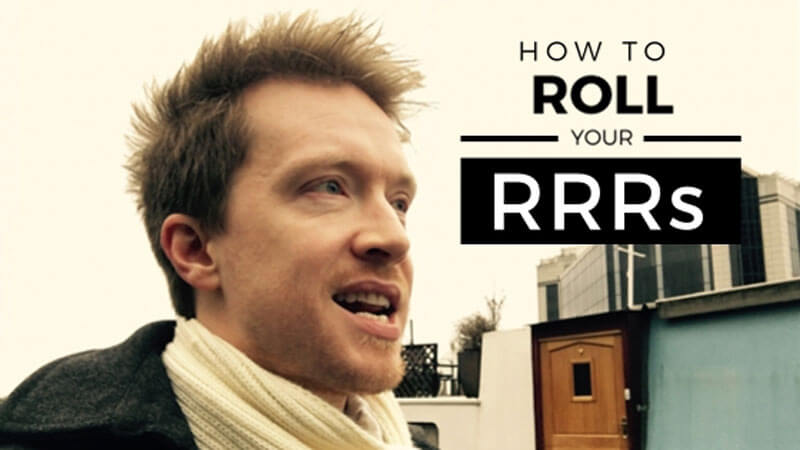 5 Tips To Roll Your Rs In Spanish, Italian… Or Any Other Language!

Learning how to roll your Rs is one of those language learning ordeals that can really make you feel stupid!

Whether you're learning Spanish, Italian, or any other language that uses this sound, chances are you've struggled to roll your Rs naturally.

Like me, you probably spent hours twisting your mouth into weird shapes, desperately trying to figure out how to get that beautiful R that native speakers produce so effortlessly.

In my case, the rolled R just came out one day, as if by magic. (That, and 2 long years of trying!)

But I wanted to ask other language learners how they did it.

So, I asked members of my Fluency Mastermind Facebook Group for their best tips, and wrote them up into this post!

By the way, if you want to sound natural in your new language, while getting fluent thanks to a fun and effective method, check out my beginner courses that teach you through StoryLearning®. Find out more and claim your free 7-day trial of the course of your choice.

How To Roll Your Rs

Technically speaking, the rolled R is known as the alveolar trill and is found in quite a few languages, like Spanish, Italian, Arabic and Malay.

The rolled R is not exactly a barrier to communication, but if you substitute it with a regular /r/ it can sometimes feel as though you are speaking like a child.

But fear not, you are not alone.

In fact, did you know even native speakers struggle with this sometimes? I remember meeting Spanish and Italians who could not roll their Rs…

All learners struggle with this sound at some point, so let's learn how some others have succeeded…

If you're more of a visual learner, you can watch a video version of these tips from my Fluent Spanish Academy youtube channel. Or if you prefer to read, just scroll down below the video and carry on!

1. Give Yourself A Facial

Most people realise that the key to making the sound lies in the mouth.

Polyglot Fabien Snauwaert explains that it’s not the tongue which makes the sound, although it is a crucial element, but rather a stream of air which creates the rolling sound.

Mark Cobb insists you also need to do this with a little smile, which is never a bad idea.

If you’re unsure of the position, Tamara Marie explains that it is the same position as if you were saying a word starting with D.

After saying the D a few times, then you should try to say the /r/ sound.

She suggests using the word drape to get comfortable with the tongue placement.

Or, you can do as Carolyn Koslow and Denis Benjorato do and put a pencil between your teeth when you speak!

These old playground favourites are touted as a surefire way to get your tongue rolling.

Jonathan Huggins suggests asking Spanish-speakers to say English tongue twisters so that the content of the twister is not new to you and you can concentrate on the sound.

Jonathan’s favourites include the timeless red lorry, yellow lorry and the downright unusual…

Ricky licked a rock that he raked near the lake on a walk with Walter, the red-haired Labrador he rescued from the shelter near Rochester.

Karen Bryant and Yadda Rivera use a Spanish version to get their tongues to behave:

It seems there are numerous animals which can help us out with this problem.

According to Miriam Carla Salas, this is the time to bring out your inner tiger and show the world how you can GRRRRRRR.

Being an angry dog works too, says Gaber Patanè.

On a more serious note, you can use the interactive IPA chart and copy the model they provide.

Of course, it might be the case that rolling your Rs is just not in your repertoire. (Like my native speaker friends I mentioned earlier.)

While it’s definitely possible to learn how to pronounce the sound, it does seem like some people are better at it than others.

Meririd Williams wonders if this could possibly be the result of your dialect or accent.

As she points out, though, having the linguistic gymnastic skills to pronounce the rolled R is not automatically going to make people think you are a native-speaker; it’s just the icing on the cake.