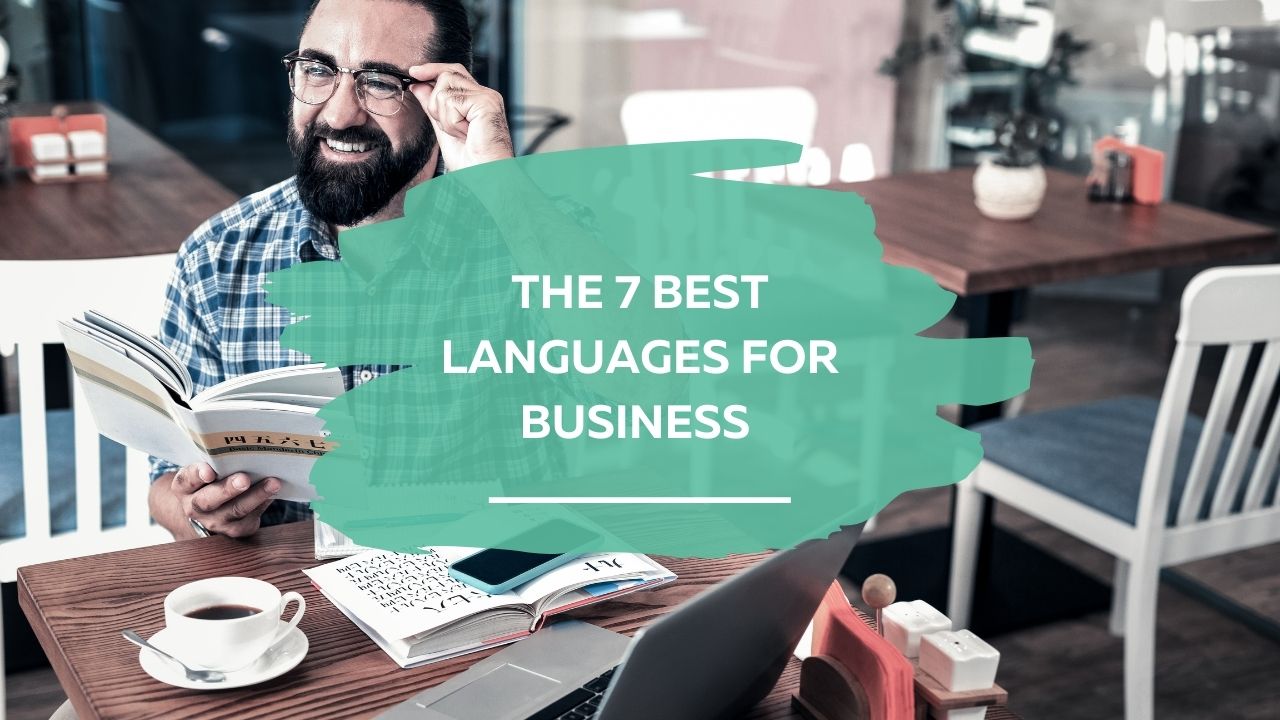 The 7 Best Languages For Business

Ever wondered what the best languages for business might be? Turns out there are seven languages that can boost both your career and your earning potential.

And I'm not just talking an extra point on the salary scale here. I'm talking opportunities you never knew existed.

Although money isn't the reason why I started learning languages (and it may not be your primary motivation either), you might find it interesting to know which languages can give your career a boost!

Perhaps you're learning one of the best languages for business already and are well on your way to riches without knowing it.

If you like watching videos, hit play to watch the video version of this post below. Otherwise, keep scrolling to read it as a blog post.

By the way, if you want to learn one of the best languages for business below and have fun while you're doing it, then click here for your free 7-day trial of my StoryLearning courses.

If you're short on time, you can get a quick overview of the 7 best languages for business in the infographic below. Then keep scrolling for more details on how each of these languages can help you make bank!

It’s no secret that Germany is a business giant.

For one, it has some of the biggest automobile brands in the world and if you’re an engineer, there are great opportunities there.

But there’s so much more!

Berlin is a hub of innovative, cutting-edge tech businesses and the new start-ups just keep coming.

However, this is Germany – you won’t be the only educated talent out there, so learning German will be a pretty strategic move.

German will also help you get a job in the sciences, in healthcare, law, media, and teaching. You can even become a pilot thanks to German.

This is all thanks to Germany’s thriving and super-stable economy.

Plus if you move to Germany AND speak the language, you could get a wage increase of up to 4%, not to mention generous bonuses!

By the way, did you know you can study for free at any public university in Germany? It’s true.

Now, what about international business?

All around Europe you’ll find that business is conducted in German. Like in these economically important countries:

But German isn’t only useful in Germany…

Have you ever noticed Germans are the world’s biggest spenders when on holiday?

Yes, and while they usually speak English, German tourists LOVE being looked after by German-speaking tour guides. Opportunities aplenty for entrepreneurial German speakers around the world.

After English, Spanish is by far the most useful business language in the US. In fact 13% of the population speak Spanish at home.

The thing is, the buying power of spanish speakers is HUGE and it’s a pretty smart move to align your services with the needs of the population.

As for Latin America, the amount of people you could reach by knowing Spanish is staggering, and giving you a major advantage over your competitors who only speak English or worse expect everyone else to speak English too!

But think of all the Latin communities and employees hired by businesses. If you speak Spanish, it's just one more reason for a company to hire you, and pay you more while they're at it

And Spanish doesn’t just come in handy in the US. According to the British Council, 34 percent of companies in the UK rate Spanish as useful to their organisation.

Learn the language, and you could be selling real estate to Russians who own football clubs like Arsenal and buy up luxury homes along the Thames and Miami Beach.

The market for Russian-language services in English-speaking countries is huge – especially in tourism.

But if you want a job in Russia, the language is even more important. Because only a small percentage of the population can speak English. This means English isn’t enough if you’re serious about working there.

Economically and politically, Russia has huge power, with some of the finest minds in science and engineering.

And wherever the centre of gravity is in the world of business knowing the language gives you access to opportunity.

But listen, Russian isn't just for rocket scientists. Many Russians want their kids to learn English because they recognise that for them English gives access to the world so there’s a very high demand for English teachers. And plenty of other great jobs exist in areas like I.T. and design.

If you'd like to learn Russian through story, click here to find out when my beginner course, Russian Uncovered, opens again.

If you’ve ever looked abroad for an English-teaching job, like I did, you’ll know that the highest-paid education positions are in the UAE.

There’s also journalism, childcare, finance, foreign services, all of these are great jobs if you speak English. But the best jobs to go to those who speak English AND Arabic.

It's the same with translation jobs – Arabic is the second highest-paid translation language.

But opportunities go far beyond these fields….

Arabic is the language of the biggest oil-rich country in the world, and the Gulf region is developing at an astonishing pace! With incredible jobs for those you can speak Arabic.

Oil’s not your thing?

Well, how about tourism, aviation, fashion or infrastructure?

The Arab world is also really big on landscaping and horticulture.

Fancy working for a sheik? You can work on projects as big as private golf estates and racecourses!

Remember that the UK has strong trade ties with the UAE. According to Arab News, learning Arabic is becoming increasingly useful post-Brexit.

And let me tell you, Western Arabic speakers are in very high demand, but very low supply. Which is great news if you’re planning to learn it!

But it’s bigger than just being able to negotiate better deals.

As with all language learning, the cultural insight you get is just as important. In the Middle East, creating mutual trust will give you an advantage.

And Arabic is a gateway in.

One British Council report I read ranks Arabic as the SECOND most important ‘language of the future’.

I wonder what the first is? Any guesses?

I'll tell you in a second, but this cultural thing is a big deal.

At StoryLearning® I teach languages through story and one of the reasons for that is building my courses around stories helps to teach you about the culture at the same time.

Let’s see if your instincts were right…

The #1 language of the future, is…

According to Bloomberg, Mandarin Chinese is the top language worldwide for business, besides English.

China is a global power and analysts say it will become the world’s leading economy by 2050.

Well, I don’t doubt that!

Here’s the thing about doing business in China:

It’s all about building relationships and friendships, and knowing how to show proper respect for the customs.

They’re very particular about this. In a business meeting, it’s not really enough to just bring a few memorized Mandarin phrases to the table and hope for the best.

There’s a lot more to understanding the Chinese than that. Even body language matters more than you think.

So if you really want to impress, your best bet is to learn Mandarin, which will also teach you the right levels of politeness, composure and etiquette.

So where will Mandarin be useful to you?

Well, there are over a billion Mandarin speakers in the world.

No doubt you’ve noticed there are Chinese business people in just about every country you’ve been to.

They’re a force to be reckoned with!

Still, learning Mandarin makes the most sense if you're headed for China – where you’ll also be able to operate in nearby countries like Taiwan, Malaysia, Singapore and Indonesia.

If you'd like to learn Mandarin through the power of story, click here to find out when my beginner course, Chinese Uncovered, opens again.

But how about a language that not many Americans are learning…

One of the best things about Portugal right now is their fantastic residency program that can lead to citizenship if you're serious about setting up there. This is quite a big deal if you want an EU passport. But you’ll need to pass the language test first!

Portugal also has tax incentives that look very appealing – they have a tax treaty with the US that allows you to avoid double taxation on your income. Nice one!

And then there’s Brazil.

And it’s a land of plenty: there are huge swathes of rainforest, resort-lined beaches for miles, and enormous, vibrant cities pulsating with life. No wonder it’s a major destination for international business.

Now, their top money-maker is agriculture!

Brazil is a huge exporter of coffee, maize, soy beans, oranges, sugar and cassava. And is also the world's leading producer of tin, iron ore and phosphate.

And in the face of set-backs, these people know how to bounce back! Brazil has an impressive history of economic growth.

As for those Brazilian entrepreneurs, they will inspire you.

Brazil is BIG on entrepreneurship – the 3rd biggest in the world, in fact.

And your advantage in Brazil is that far fewer people speak English, so if you go in with both languages, you’re already winning. And you can access a really exciting number of opportunities that might be saturated at home.

If you'd like to learn Portuguese through the power of story, click here to find out when my beginner course, Portuguese Uncovered, opens.

There’s one more extremely useful language for business, which you’ve probably guessed already, and this one is truly international.

French is not just big in Europe: it’s spoken on 5 continents, in 55 countries.

But even in the US it’s really useful to know as France has a close business partnership with the US.

And if you plan to expand your business to French-speaking Canada, it’s a must. After all, Canada is the number 1 consumer of U.S. exports.

If you’re still in your study years, here’s an cool incentive: foreign students who know French are eligible for some pretty awesome scholarships!

And if business and profits aren’t your thing well, international organisations and NGOs rely heavily on employees who can speak French.

Amazingly, it’s estimated that by 2050, French will be the most-spoken language in the world, which might come as a bit of a surprise.

So there you have it, the 7 best languages for business. These are the languages which, statistically speaking, earn you the most money if you learn them.

Although money has never been my motivation to learn languages, it certainly can help to know which languages will open doors for you to better career opportunities.

So if you'd like to get started learning one of these languages fast while having fun, take a free 7-day trial of my StoryLearning courses ®.