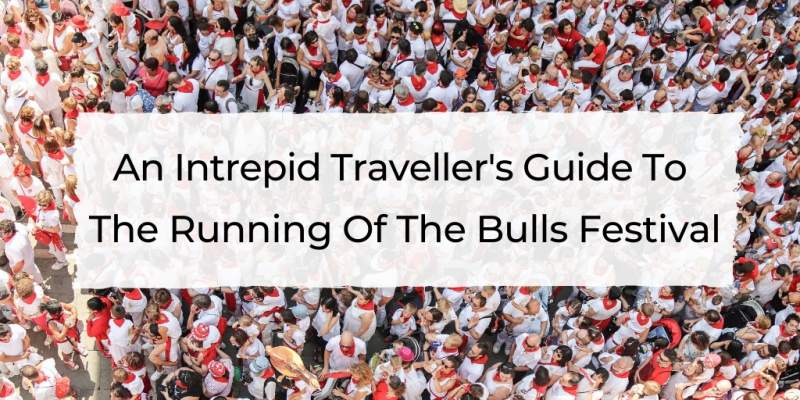 If you're learning Spanish, then I'm guessing that one of your reasons is so that you can get more out of your trips to Spain.

And what better way to experience Spain than to go to one of its many cultural events?

The Running of the Bulls Festival is one of Spain’s most notorious fiestas.

You’ve probably even seen some rather shocking footage of tourists and Spaniards alike getting trampled or seriously injured by the bulls.

But do you really know what it’s all about?

Well if you’re curious, or planning to go, then you’re in the right place!

By the end of this post, you'll know everything you need to know about this festival. I'll even share some tips on how to participate if you fancy running with the bulls yourself.

You can read the post here, or if you're more of a video person, you can watch the video below.

What Is San Fermín & What Are Its Origins?

The Running of the Bulls is actually just one part of the 9-day sanfermines festival, which takes over the city of Pamplona every July.

Of course, the main events, are the daily encierros, as the Spanish call them, or what we call the running of the bulls. So, you might be wondering, where did this all come from?

First records date back to medieval Spain. Originally it was a religious festival celebrating the patron of Navarra province, San Fermín. Back then, there wasn’t any bull running like there is today. But over the centuries the fiestas evolved.

It’s said that initially, countrymen would bring their bulls into the city for sort of rodeo type events, or corridas de toros. In the process of leading the bulls to the city, kids and adults would smack them to get them moving, sometimes jumping in their way for a quick thrill.

In wasn’t until the 18th century, when the modern-day Running of the Bulls really started to take shape. Later, Ernest Hemmingway wrote about the sanfermines in his book, “The Sun Also Rises”.

From that point onwards, the festival began to attract a lot more visitors and international attention.

(Fun fact, women only got the right to participate in 1974.)

What Actually Happens During The Festival?

The festival begins with the chupinazo, which is basically a big firecracker. It’s set off from the city hall’s balcony in front of masses gathered in the square. With this, the party starts at noon on July 6th.

Los toros de San Fermín get going the following day, at 8am sharp, and occur every morning until the last day of the festival on the 14th.

The running starts on Santo Domingo Street and ends at the Plaza de los Toros when the bulls enter the bullfighting stadium. The circuit isn’t very long, just over 800m. If you’re wondering how long it actually takes to run, you’re really only looking at a few minutes. Sounds simple enough, but the tricky bit is Pamplona’s narrow, cobblestone streets.

Before releasing the bulls, hundreds of runners chant together for protection from San Fermín:

A San Fermín pedimos por ser nuestro patrón que nos guie en el encierro dándonos su bendición (San Fermín we ask for being our patron that you guide us through the running of the bulls giving us your blessing).

Once the first rocket is sounded, the gates are opened and the bulls are released. There are 6 fighting bulls, and then a handful of castrated bulls to keep them in line. Once all of them have left the corral or their bullpen, the second rocket sounds.

That’s when the runners start to get nervous because it means the bulls are coming.

So Is It Actually As Dangerous As It Sounds?

Every year during the Running of the Bulls over 200 people are injured. Fortunately, it’s usually just scraps and bruises. But since records have been kept since 1924, 15 people have died from being gored, or struck by a bull’s horns. The most recent death was in 2009.

Want To Run With The Bulls? Here Are Some Tips…

Interested in taking part in the festival yourself? Here are some handy tips for making the most of your adventure and staying safe at the same time!

Curious to see what taking part in the bull-run is really like? Check out this fascinating footage recording in 2017 by one participant who brought his GoPro camera along…

Some Helpful Spanish For Your Bull-Running Adventure

Thinking of heading to Pamplona for the festival? Then you better bring your Spanish with you!

Here are a few important Spanish words and phrases related to san Fermín that you will come in handy whether you decide to visit Pamplona yourself or you just want to chat about the event with your Spanish friends.

If you want to work on your Spanish in more depth before your trip, click here check out my premium Spanish courses.

So there you have it… everything you need to know about los sanfermines!

And if the actual running isn’t for you, then watch los toros from a private balcony, behind the barricades or at the finish line in the bullfighting stadium.