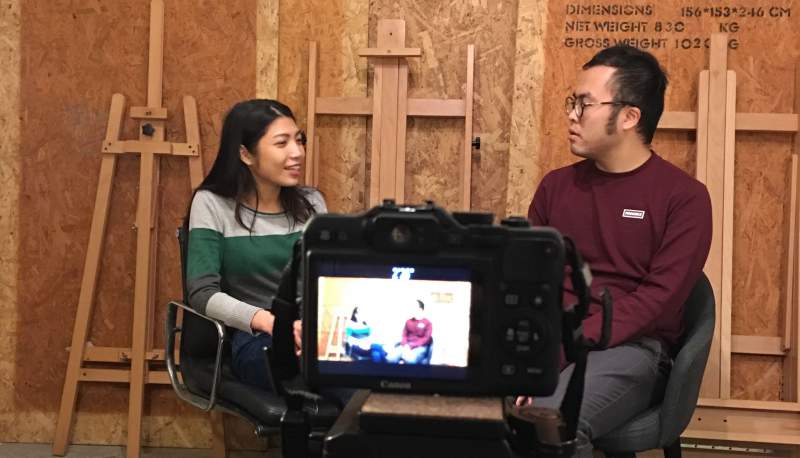 In this blog post, you’re going to see behind the scenes of a “passion project” I’ve been working on for months.

It’s called Cantonese Conversations, and it’s my answer to a horrible lack of study material out there for people trying to learn Cantonese online.

After traveling thousands of miles, working with dozens of people, recording hours of video, and discovering possibly the coolest artist studio on Hong Kong Island, I’m finally launching this new resource to the world!

Well, to the handful of Cantonese learners out there, at least…

Cantonese Conversations is a huge library of audio and video recordings of authentic conversations in Cantonese between Hong Kong’ers.

However, unlike watching TV or browsing YouTube, this material is designed to help you actually learn Cantonese – not just be entertained by it:

But enough of that.

How did this new resource come to be?

The Story Of Cantonese Conversations

They say Cantonese is one of the hardest languages in the world.

In my experience, that’s certainly been the case!

I’ve been learning Cantonese on and off for a few years now, and it's been tough for a whole host of reasons, but the most frustrating thing has actually not been a linguistic challenge…

It’s not the tonal system…

Or the traditional Chinese characters…

The most frustrating thing for me about learning Cantonese has been an abject lack of good study material.

If you’re learning Cantonese, and especially if you live outside Hong Kong, you’ll know what I mean.

The Trouble With Learning Cantonese Online 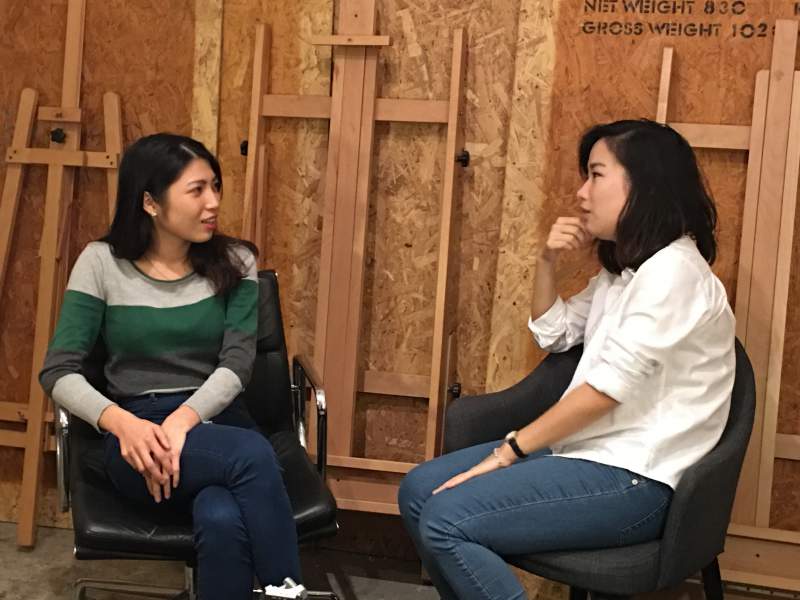 Beginner Cantonese learners have a couple of decent resources to choose from.

But once you get past the beginner stage in Cantonese and approach the intermediate level, you’ve got…

OK… that’s not quite true.

There are a few books available.

There’s a pricey intermediate grammar from Routledge, that is inexplicably written without using Chinese characters!

If you live in Hong Kong, you can find a few good books for intermediate level from the excellent Commercial Press and Greenwood Press.

However, you can tell from the titles that they’re rather uninspiring… 100 Office Dialogues in Cantonese is one such example!

But here’s the real point…

At intermediate level in any language, you’ve can’t rely on textbooks for your progress.

To have any hope of reaching B2 and beyond, you have to spend tonnes of time consuming things in the language.

This means listening and reading.

And so what do you do when almost all available material to learn Cantonese online is either for beginners… or native speakers? (With nothing in-between.)

By nature, I’m a problem solver.

I suppose that’s why creating Cantonese learning material has been on my mind for some time.

“If you can’t find what you want, make it yourself!” – is a mindset I often adopt.

[Tweet “If you can’t find what you want, make it yourself!”]

Living in London, though, and not being surrounded by Cantonese speakers, it was never immediately obvious to me how I was going to be able to get enough people together to make something happen. So, the idea kept getting pushed back, and I got on with other things.

Towards the end of 2016, though, things started to converge to make a project more possible.

My friend Calif from Hong Kong moved to London, and brought with her an infectious passion for promoting the Cantonese language.

I wanted to create the very thing I couldn’t find myself:

I don’t think this is asking a lot…

After all, it’s a pretty standard requirement of independent language learners: “Just give me something I can listen to and follow along!” 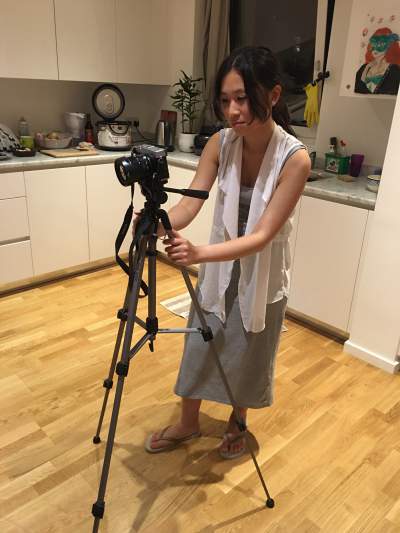 Calif loved the idea, and so we got a couple of Cantonese speakers together, decided on some topics, turned on the camera, and pressed record!

And to top it all off, the room was too dark, so we couldn’t use the video recording!

A couple of weeks later, we tried again.

This time it was much better!

Not in the sense of planning exactly what they were going to talk about, but instead, deciding on a topic which has some mileage to it, who was going to “tell the story”, and then thinking of a couple of provocative probing questions for the other person to ask.

It worked a treat!

These great conversations between Calif and Wendy, which range from how Wendy almost died on a river in Northern China, to why Calif used to suffer from “princess syndrome” when she was younger, ended up forming the first material inside Cantonese Conversations.

Recording On Location In Hong Kong 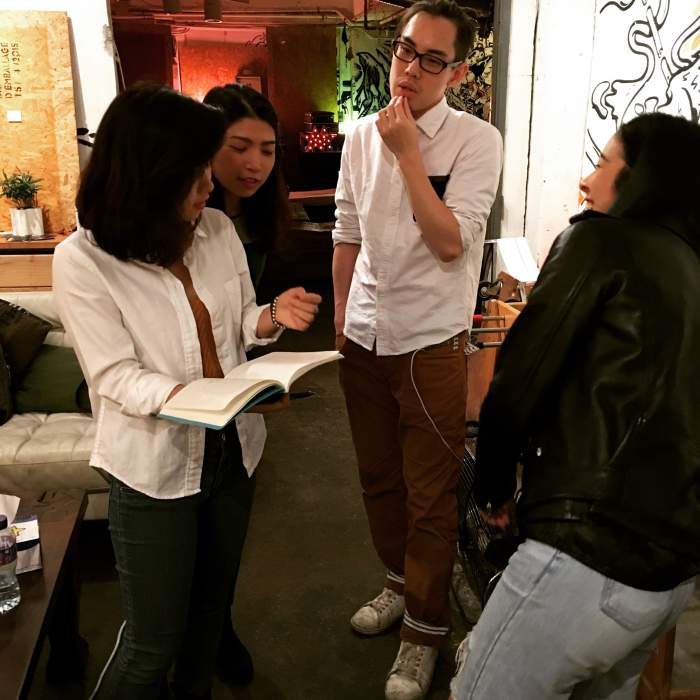 A couple of months later, excited by what we had produced, I decided to fly to Hong Kong to take the new material to the next level.

Shortly after arriving in Hong Kong, I was lucky enough to meet Karen, who quickly became a good friend, as she shared my passion for creating.

I told her about my project to create new material to learn Cantonese online, and she immediately had a flurry of ideas.

Within a couple of days, we had successfully rounded up some people, their friends, and some friends of their friends, all of whom were up for… having some Cantonese Conversations!

The only problem was… where were we going to record?

So, I said, this needs to be filmed! (I put my foot down with myself on this.)

Karen remembered an exhibition she had been to recently in an artist studio in Kennedy Town, Hong Kong Island. The event itself was pretty bohemian – what generally happens when you combine artists and booze!

But the cool thing was the venue – the studio itself. She remembered it was full of all kinds of crazy objects, murals, lights and so on.

And, she said, if we were lucky, her friend might allow us to film there.

It sounded quite “out there”, but I trusted her on it.

The following week, we somehow managed to find a day where everyone was free, so we all gathered together and spent an entire evening recording conversation after conversation in Cantonese!

I was so happy with the result…

The stars of the conversations were all from different walks of life, which made for a really interesting mix of people. Photographers, surveyors, programmers, artists… it was awesome!

This gave us a lot of very interesting angles for the conversations, too.

Recording In A Crazy Venue 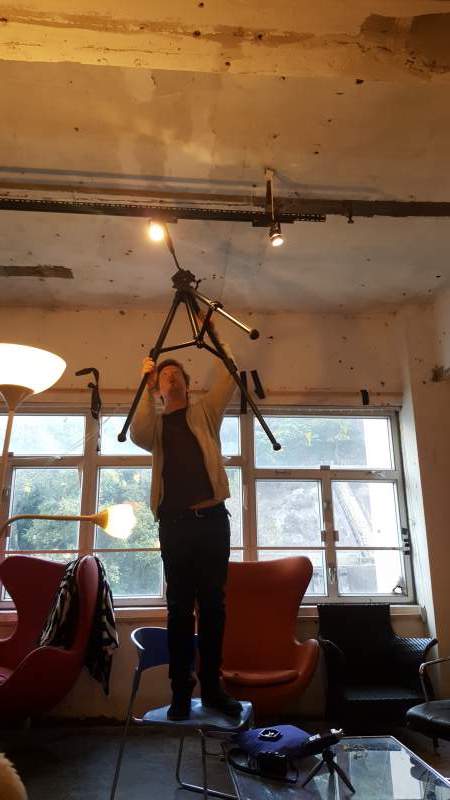 We also had a lot of fun setting up the venue itself for filming.

Hanging curtains around the room, to dampen the sound and prevent echo.

Trying out different chairs, against different backgrounds, so we could compose a shot that was visually appealing.

Now, it wasn’t all totally plain-sailing… we had curtains fall down mid-recording, loud motorbikes fly down the road outside at the worst times, and some conversations that collapsed half-way through.

But, in the end, we only had to discard a few takes, and the final result was amazing.

In the end, we had dozens of recordings – enough to keep me busy in my own Cantonese studies for months!

But, the recordings weren’t enough by themselves.

We had created a good foundation: 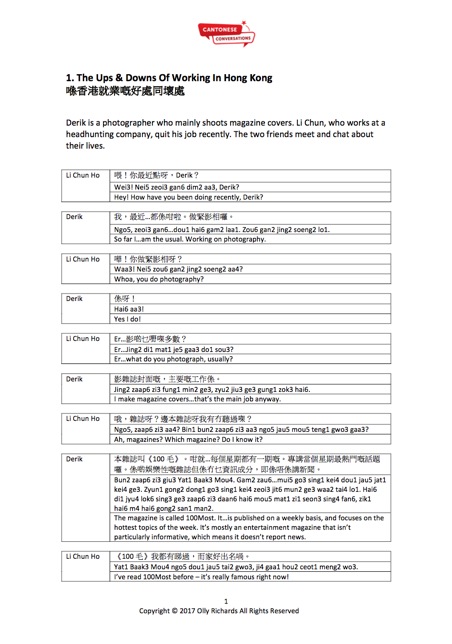 But there was something missing – study material.

In order to actually learn from this material, I needed specific things:

This, in case you hadn’t realised, was going to be a tonne of work.

Not only were there dozens of conversations to transcribe, but it needed to be done by someone who knows jyutping – which most people in Hong Kong don’t!

After that, the entire thing needed to be translated into English.

Luckily, I found some very talented people to help.

Without them, none of this would have been possible.

Here's how I suggest you use the material:

Putting Together the Finishing Touches

Putting all of this together took time, and I’ve been itching to put this out into the world for many months now!

But the benefit of waiting for everything to be finished has been that I’ve been able to study with the material myself in the meantime!

This has been great, because it’s allowed me to find little things I wanted to change, such as bits of formatting here and there, better filenames, and other things you probably won’t ever notice!

One of the things I decided to create as a bonus to the material, however, is pre-made flashcards with all the vocabulary from the conversations.

After I would study one of the conversations from the package, I would take time to transfer my favourite vocabulary over to flashcards.

So, I thought, why not take care of that for people, so it’s already done?

That’s why I created full Anki flashcard decks for all the word lists in the product, and threw it in as a free bonus with the course!

You can study with the material at home, and then carry the flashcard decks with you on your phone, so you can memorise the vocabulary during the day whenever you have time.

As you can hopefully tell from this write-up, I’ve really gone to town on this!

I know the world of people learning Cantonese is small, but that’s why I think I’ve been so passionate about making this… I’m confident it will be a huge service to the Cantonese learning community!

I’ve created exactly what I knew was missing in my own learning, and after just a few weeks studying with it, I found my vocabulary increasing quickly, my speaking becoming more natural, and my listening comprehension improving in leaps and bounds.

Given that it’s not a structured course, I imagine it won’t be to everyone’s taste. But for anyone who loves Cantonese as much as I do, enjoys spontaneous, fun conversations, and wants to spend more time immersed in the language… you’re going to love it!

I’d love to have you join me in Cantonese Conversations, and you can find more information by clicking here.