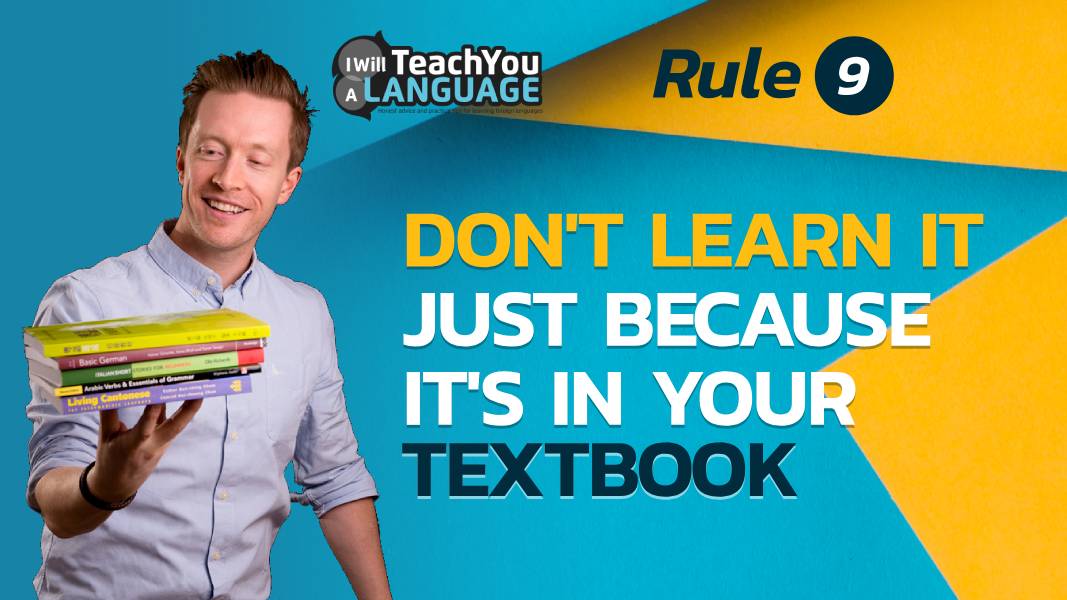 Don’t Learn It Just Because It’s In Your Textbook! | TROLL 009

Back in the dizzy days of 2011, I was living in Japan, teaching English.

It was the start of term, and I remember my boss telling me about a new class of students I was going to take over.

I knew something was up immediately, because a C1 or C2 group class in Japan is very unusual, at least in the casual language school setting I was in.

Then, I noticed the grin on my boss’s face.

He said: “To be honest with you, this group is probably no more than intermediate. At best.”

He went on to explain that they were long-term students who had been at the school for almost 15 years.

They had basically stopped improving at intermediate level, but they enjoyed English and their group of classmates, and so they kept coming back and wanted more.

After a certain point, though, they’d been through all the intermediate textbooks that existed, they’d taken all the tests (and probably failed them).

But the school eventually took the decision to move them up to an Upper-Intermediate class, then Advanced, and then Advanced Plus, where they’d been ever since!

And that’s where I came in.

My job was going to be to teach this group of intermediate students… with a super advanced textbook… and nobly continue the charade.

Now, we can debate whether this was a good decision from the school or not. On balance, I think it’s probably the only thing they could do.

What are they going to do – send them packing?

The big problem faced by Japanese students in Japan is that they have very little opportunity to practise English in the real world.

And, as experienced language learners know, you can’t study your way to fluency in a language.

But here’s the problem…

These students thought you could study your way to fluency.

And so this begs the following question…

By the way, if you want to learn a new language through stories, not “study” I recommend my courses which teach you through StoryLearning®. Find out more and claim your free 7-day trial of the course of your choice.

Is More Knowledge A Good Thing?

In most areas of life, you’d have to say yes. More information about…

But with language learning… is more information actually a good thing?

Take this group of students as an example.

Granted, it’s a rather extreme example, but it’s typical of how many people think about language learning.

Learning English is hard, they think!

So I’d better study as hard as possible, so I can learn all that stuff…

Then I’ll be fluent!

In fact, one of the keys to speaking another language fluently is to accept that you’ll never know everything, because then you can concentrate on expressing yourself with the stuff you do know.

Expressing yourself and making yourself understood with minimal knowledge of the language is one of the hallmarks of successful language learning, because that ability to find a way to communicate outside your current ability level is a skill that scales from very low levels to very high levels, and it is the seed that confidence grows from.

If you’re always able to somehow get your point across, you never need to be frightened about forgetting a word, or messing up your grammar. And that way you thwart the fear villain and the grammar villain in one fell swoop!

How To Learn A Language… Away From Your Textbooks

Trouble is, we’re conditioned to think that it’s “more knowledge” that’s the answer to our fluency problems.

Your textbooks are full of “stuff”.

You can get out there and enjoy doing all these activities, and many more, before you’ve learned everything in your textbook.

You’ll find that you learn a lot of the stuff from your textbook naturally, by doing other activities, without having to “study” it at all.

But, most importantly of all, stuff that you do learn in a textbook often won’t really sink in until you start to use it in the real world anyway.

If You're Not Ready, You Can't Learn

There’s also a funny little concept called the Natural Order Hypothesis, which states that when it comes to learning a language, we will learn grammar in a particular order…

Our own natural order… that’s personal to us…

And that natural order of learning is so strong, so ingrained, that even if you try to teach me some grammar that I’m not ready for, that comes outside my natural order, I simply won’t learn it.

I’m not ready for it.

So, I’ll learn it later, when I’m ready for it, thank you very much! This is an idea that we covered back in the 4th rule of language learning.

And this is the real point of this rule of language learning.

It’s not only that you don’t need to learn everything in the language first before you start using it.

It’s that’s you often can’t learn it before you start using it, or at least until you’re ready to learn it.

And this is why my so-called “Advanced Plus” students in Japan were able to keep studying and studying for over 15 years, without any meaningful progress.

“There’s a lot more to do in the textbook… we’d better finish that first!”

How different would things have worked out if, instead, those students had been helped to find conversation partners, asked to produce some writing, read books, join an English society, or give talks in the language instead…

Anything, in fact, that showed them there was life outside the textbook…

And that they could use the modest amount of English they already knew to go out and live their lives in a second language, instead of allowing them to continually kick the can down the road… until they’re “ready”.

Don't Learn It Just Because It's In Your Textbook!

And so, if you find your language textbook to be a source of anxiety…

And haven’t mastered yet…

Stop to consider whether learning all that stuff will actually change things for you all that much.

Consider how much time you’re spending worrying about that.

And instead, think about everything you already know – and congratulate yourself for it!

Start planning how you can begin using that knowledge, today.

Just because it’s in your textbook, you don’t have to learn it!