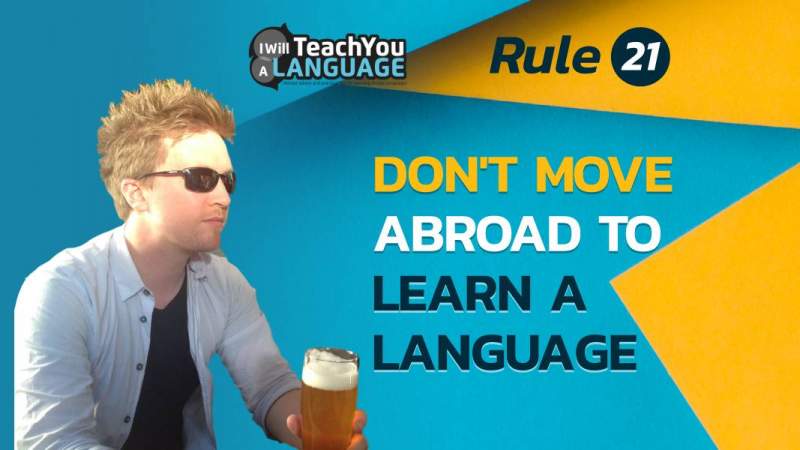 I want you to be honest with me right now…

Have you ever thought to yourself that going to live abroad is the secret to becoming fluent in your target language?

That if you go and live abroad… surrounded by the language every day… that you’d be fluent in no time?

Fluent in time for Christmas?

Come on… you can be honest… have you ever thought that?

It’s ok… because if you have, you wouldn’t be the only one.

Because I’ll be honest…

More than a few times.

By the way, I've discovered that reading stories in my target language is the best way to learn fast while having fun. And you can do it from home!

That's why I created the StoryLearning® method, which gets you fluent thanks to stories, not rules. Find out more and claim your free 7-day trial of the course of your choice.

Now I remember back in 2008, I had decided to move to Japan, and I was all set to learn Japanese. It was going to be my fifth foreign language, and with all the others already under my belt, I was convinced that I was going to absolutely smash it.

In fact, I think I remember even smugly telling a friend of mine “Yes, when I get to Japan I’ll be fluent within a couple of months!”

But if you’ve heard me tell the story before, you will know that nothing could be further from the truth.

Far from becoming fluent, I floundered for a good couple of years, without getting anywhere near fluent in Japanese.

Well, the basic reason I struggled in Japan was that there was a big mismatch between my level at the time, and the level I needed to be at in order to engage people in any kind of meaningful conversation.

Basically my Japanese was crap, so nobody wanted to talk to me.

(And who can blame them? It’s bad enough talking to me at the best of times… let alone when I’m garbling your language!)

But anyway, what I’ve described is actually the same situation that anybody learning a new language faces…

So what do you do?

Well, I’ll tell you what you don’t do.

You don’t pick up and travel half way across the world just to learn the basics when you can do that perfectly well from home.

Look, when you are a complete, abject beginner like I was in Japanese, you’ve got a very straightforward problem, namely that you need to learn the basics of the language.

Now, is the best way to learn the basics of that language really by moving abroad and trying to persuade strangers to talk to you?

I don’t think so, unless you are one of those lucky people who doesn’t mind the Tarzan approach of forcing yourself upon unsuspecting locals until they cave in and talk to you…

Well, of course, unless you are literally pacing the streets all day eavesdropping on people’s conversations, you’re probably not going to get all that much so-called exposure. (Although you might get quite fit.)

Let’s be honest… you’d get more useful exposure by sitting at home with a coffee, a bag of crisps, and a Netflix account. Or my short story books.

If your goal is to get yourself up to an intermediate level in a new language, where starting to talk to people becomes a viable option, you can do it just as easily sitting in your pyjamas in your living room as anywhere else… with good old fashioned study!

Well, yes you can.

Save yourself the trouble…

Get the study done while you’re in the comfort of familiar surroundings, a routine that you control, and a social life that keeps you happy and positive.

Anyway, if I had my time again in Japan, I would do things very differently indeed.

I would work my socks off for a solid six months before moving to Japan, so that I could touch down in Nihon already capable of having a solid conversation in nihongo.

Then, I could have improved at a much faster rate, enjoyed the learning process more, and probably been much happier in general.

And so I really do think that, for most people, they’re dreaming of moving abroad to achieve their language dreams, without really understanding the reality of what it’ll be like.

While all the time avoiding committing to doing the work right now, at home, where they’re fully in control and where the opportunity lies.

Firstly, when people move abroad, it can be for a whole host of reasons.

It’s also true that I have met people who have had incredible success with languages while living abroad. So it can happen.

However, these are all people who are exceptionally social, and have an uncanny ability to inject themselves into any social situation, form social groups with incredible ease… and get really good at the language really quickly.

I’m not like that, and I just can’t bring myself to do that, but if you can, the results can be absolutely out of this world.

For most people though, the principle stands that you should probably do the work to get yourself up to intermediate level in your new language… while still at home.

Just get yourself a good textbook…

Or, I don’t know… an amazing story-based course that’s designed to take you up to a solid intermediate level… (Hint, hint!)

… and then start to think about moving. So that, with your intermediate level you can really communicate with people and begin to access some of the wonderful opportunities of being aboard.

And until next time, do yourself a favour, and don’t move abroad to learn a new language.