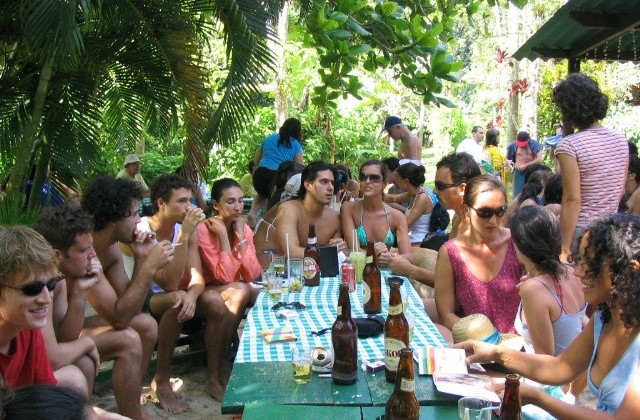 How To Start A Conversation With Native Speakers

I recently received an interesting email from a reader asking how to start a conversation with native speakers on a plane.

And that got me thinking.

I've come to believe that if you're learning a new language, randomly striking up conversations with people on the street (or wherever you happen to be) may not be a good strategy.

You may find the prospect of talking with native speakers intimidating right now. You may be downright afraid – that'll be the fear villain and her evil ways. And if that's the case, you probably shouldn't force it.

But that's not the case for everyone.

Many people are happy putting themselves out there, taking social risks, trying out their target language whenever they can.

And so to the question.

What is the best way to strike up a conversation with native speakers?

By the way, if you want to speak your target language thanks to a fun and effective method that teaches you through stories, not rules, check out my StoryLearning® courses.

If you break down the skill of how to start a conversation (and I think it is a skill), there are two component parts:

1) What to say
2) Making the approach

Since we're dealing with starting conversations in a foreign language, we unfortunately need to add a third factor into the mix, a big fear that many people have:

3) What if I don't understand the reply?

I don't know about you, but it's the second that is the hardest for me. Perhaps due to my English sensibilities, I often feel self-conscious about disrupting the social fabric (difficult to shake a lifetime of that!), and it's always the approach that I find hardest.

I used to be terrified of not understanding the reply too, but I've developed ways of dealing with that that I'll share here in the post.

How To Start A Conversation With Native Speakers

Let's get stuck in.

Now that we've broken down what goes into starting a conversation, we need to address each of the three steps. Luckily, and perhaps unusually for language learning, this is simpler than you may think!

Unless you're a very spontaneous person, preparation is key. Getting good at starting conversations involves analysing the situations you find yourself in everyday (or expect to find yourself in the future), then coming up with an preparing appropriate things to say to people in those situations.

What works best for me is to think of a particular piece of information that I might genuinely need to know in that situation, and simply ask for that.

So, for example, if you're going to be taking a flight, you might genuinely ask the person sitting next to you:

If you're on the street, no-one could ever blame you for asking:

Another strategy is to think: “How have other people started conversations with me recently?” or “What were the last 3 things said to me by a stranger?”

Either way, the most important thing is to spend some time looking at the situations you find yourself in and preparing things to say. If you don't do this, concerns over correct grammar or the vocabulary you need will stop you pulling the trigger.

Here in Cairo, one of the things that's been working for me is to keep an ongoing list of things I want to be able to say to people (I use Evernote for this). Then, when I meet one of my tutors, I get it translated into Arabic and go away and learn it using my flashcards.

Deciding on situations and preparing in advance also solves problems relating to 2 & 3 on the list, but more on that later.

For 28 examples of conversation starters (in Japanese), check out this post.

Making The Approach – “The 3-Second Rule”

Approaching strangers is tough when you're still learning your target language. There's no two ways about it.

However, the approach that I'm suggesting here means that when you do strike up a conversation you already know, and have practised, what you're going to say.

This cuts out the linguistic problem of how to start a conversation, leaving the social one remaining. And for that, I have a great rule: “The 3-second rule.”

The concept is this: Want to talk to someone? Give yourself 3 seconds to make the approach and start the conversation.

Have 3 seconds passed? Walk away.

The logic is simple. We've all wanted to go up and talk to someone, thought too much about what to say, and ended up not doing it, telling ourselves things like: “I'll just practise it a bit and be ready next time” or else convince ourselves of some BS reason why we shouldn't do it: “They're probably in a hurry and won't want to talk to me”.

Basically, 3 seconds is the window of opportunity to take action before your self-defence instinct kicks in. You overthink, worry about what might go wrong, and bottle out.

Hold yourself to it (which will mean a lot of walking away at first), and you'll train yourself to get much better at starting conversations without over-thinking.

For more good, practical ideas on getting over shyness, check out this post from Benny Lewis.

What If I Don't Understand The Reply?

This can be crippling, and there have been times when this fear has prevented me from speaking with anyone at all.

When I first arrived in Japan, a country where speaking to strangers is not the done thing, fear of not understanding the reply, and the fuss that would ensue as my interlocutor would panic over being faced with a foreigner who didn't understand Japanese, prevented me from talking to people for a long time. (And this was my 5th foreign language!)

The solution is in the preparation.

Earlier in the post, I suggested that you prepare conversation starters that relate to a genuine need you may have (such as asking for directions).

Everyone has the right to ask a stranger for something they need, however well they speak the language! By asking for something specific, rather than a generic and awkward “Please talk to me!”-type request, you play into any decent person's sense of civic duty.

They will take the time to tell you what you need, even if you don't understand what they say at first.

Think about it – wouldn't you do the same thing if the shoe was on the other foot?

The point is that you have no need to fear not understanding the reply, because with the right question they will make sure you understand. The information you ask for is more important that the language used to give that information.

You won't be seen as stupid or irritating to the other person, because you're asking them for something that they will be happy to help you with.

Making The Most Out Of… Life!

Of course, all of this is just the beginning. Once you've started the conversation, it's then up to you to carry it on and make the most of the opportunity.

Perhaps you think this is all a bit disingenuous.

The people that I meet are the reason I love learning foreign languages. In fact, relationships with other people are a huge part of what makes life worth living. I've been lucky enough to meet some amazing people in my life, and those friendships all had to start somewhere.

I'm sure that I've missed out on meeting many other amazing people because of a fear of approaching them, or simply not knowing what to say. These simple strategies have helped me meet more people using foreign languages and enriched my life along the way.

I hope they are useful for you too!