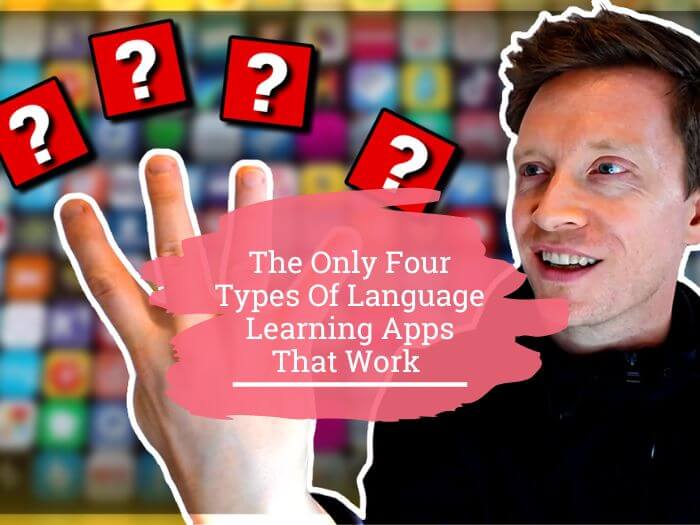 The Only Four Types Of Language Learning Apps That Work

Are you learning a foreign language? Then get ready for a bit of detective work on your phone. Check it now because only four valuable types of language learning apps will help you in your quest.

Any other apps waste your time and should head straight for the bin. Be merciless because learning a new language properly takes a heap of time and energy. So you don't really have any to waste on apps that don't even work.

Ready to find out what language learning apps should and shouldn't be on your screen and why? Let's get cracking.

By the way, if you want to learn a new language fast, without language learning apps, my top recommendation is StoryLearning®, a fun and effective method that gets you fluent thanks to stories, not rules. Find out more and claim your free 7-day trial of the course of your choice.

If you prefer watching videos to reading, hit play on the video below. Otherwise, keep scrolling to read the post.

What To Practise When Learning A Language

The three main pillars of language learning are:

It may seem blindingly obvious,  but you won't pick up a ton of new vocabulary in one lesson.

In fact, we've probably all tried that trick where you see or hear a new word and write it out ten times, thinking, right, I'll remember that now! But, just half an hour later, it disappeared from your memory banks. Ahh!

And if you're learning a new language, I'm sure you've listened to others jabbering away and wondered if you'll ever be able to follow what they're saying.

Well, you will be able to if you practise. And that's where technology on your devices can really help. But only if you choose the language learning apps that genuinely help you learn and immerse yourself in the language.

So, here they are.

The Four Types Of Language Learning Apps That Work

The first pillar of language learning involves immersion. I've studied many extreme methods organisations like the French Foreign Legion, and the Mormon Missionary Training Centre use to teach languages.

One thing they have in common is immersion — surrounding their trainees with language input, often from Day 1.

Now, most of us will never go to those extremes. Nevertheless, the more time you can spend reading and listening to a language, the easier it will be to become fluent. And that's why content apps are so valuable.

Back in the day, it used to be really hard to find content in another language. If you lived in a big city, you might manage to find a specialist language bookstore or pick up a foreign language newspaper.

If you lived anywhere else, you were out of luck. If you were fortunate enough to know someone who spoke the language, you could pluck up the courage to chat with them or ask to borrow some books.

But most of us were usually stuck when it came to finding any content that wasn't in a textbook. Not anymore!

Content Apps are game changers for language learners because they give you interesting real-world videos, podcasts, articles, books and blog posts in the language you're learning.

You get to spend as much time as you can manage reading and listening without going to all the expense of moving to a foreign country (like I did.)

All these options are helpful language learning apps that give you direct access to content so you can spend your time immersed in the language you're trying to learn.

Using your new language is one of the best ways to become fluent. However, finding people to talk to in that language can be really tricky.

That's where language exchange apps are so valuable. They give you access to native speakers of many languages who are ready and willing to exchange messages, texts and chats with you.

For example, you speak English, and you want to learn Portuguese. You search the app and find some Portuguese speakers who are learning English.

That makes language exchange apps mutually beneficial because you're each helping the other to practise a new language and learn about the culture at the same time.

I first came across this sort of app when I was living in Qatar and trying to learn Cantonese. Now, as you can imagine, I didn't find many Cantonese speakers there in the Middle East.

But, I did find them in Hong Kong thanks to a language exchange app that had recently burst onto the scene. I got a year-and-a-half's extra practice in Qatar before moving to China, which made life there much more manageable.

These apps won't magically teach you how to speak a language, but they will make it easier for you to connect with people as keen to practise as you are.

You've picked up thousands of words in your own language over the years, most of which have stayed in your memory thanks to constant repetition and reinforcement.

Most of us don't have that luxury when we're learning a new language, so we have to create it for ourselves. In other words, we can't escape the chore of vocabulary practice.

Now, you can spend hours writing word lists, making notes, trawling through them, and trying to find the ones you need. But honestly, that's a very inefficient way to learn.

Fortunately, Flashcard Apps make the job easier and more efficient by helping you get organised. You can focus on the words you need to learn and not waste time with vocab that's already in your long-term memory.

Spaced repetition is a memory technique that helps you learn new words by repeating them at specific intervals until you prove you know them.

Apps with spaced repetition usually show new vocab cards frequently at first, then space them out more as you keep getting them right. That means you're only studying vocabulary that you haven't learned yet.

Flashcard apps are easy to review in your spare moments. So when you're waiting in a queue or eating lunch, it's simply a matter of getting out your phone and doing a few more minutes of practice on that tricky list.

Now, these apps come into their own when you're learning a language like Mandarin or Japanese. Words and even phrases in these languages look more like tiny works of art than words — at least, they do if you're used to languages like English or French.

So there's no getting around it. You'll have to memorise hundreds, even thousands of tiny pictures, to read these languages with any degree of ease.

That's where a character or script app can really help.

Use Skritter To Learn Chinese And Japanese Characters

Now, there's only one app I recommend in this category, and that's Skritter. It has a fantastic interface that mimics writing and has lots of spaced repetition built in.

Skritter is not a free app — you can pay monthly, six-monthly, or for a whole year — but it includes expert lists (or build your own), flashcards and handwriting practice.

That means you learn the characters by hearing, seeing, writing and repeating them, which means they're much more likely to come to mind when you need them. .

Wasting Your Time With The Wrong Language Learning Apps?

If the language learning apps on your phone don't fall into the Content, Flashcard, Exchange or Script categories, you're wasting valuable moments every time you tap them.

Why? Because as I explain in this app villain post, filling your time with bright buttons, games, points, and streaks distracts you from the real work of language learning.

So, don't be fooled. Delete the games today and concentrate on the only four language learning apps that help you get to language fluency.