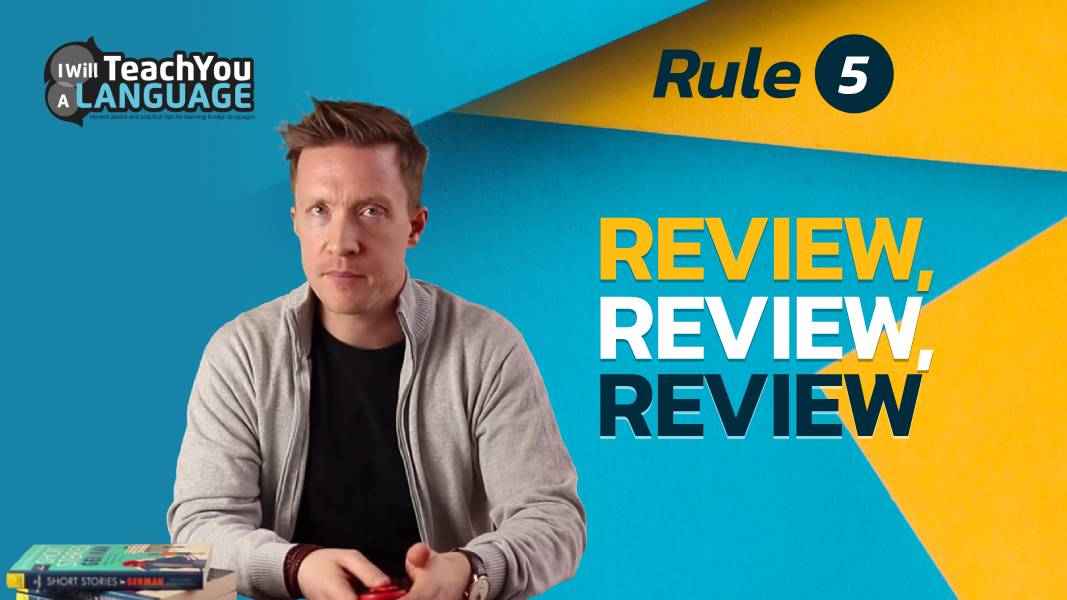 In my early days of language learning, I had a very close friend – a Spanish speaker called Tomás.

One of the things he used to say to me was: “¡Qué tonto eres, tío!”

…which translates as: “You’re such an idiot!”

Now, he used to say this to me quite a lot.

Good job it was affectionate. (Most of the time.)

The first time he said it, I probably didn’t understand.

Nor the second time.

But after the 500th time, I knew this phrase very well indeed.

Then… I started saying it myself.

Before long, I could say it just like him.

I knew this phrase so well that I could use it in just about any situation with Spanish people, to take a jibe at someone with just the right intonation to give it a nice comedic effect and endear myself quickly to the people around me.

It was pure gold.

By the way, if you're looking for a language learning method with plenty of built-in review to get you from beginner to intermediate fast then look no further.

How To Learn New Vocabulary Inside-Out

Now, how did I learn that phase so well?

Simple — my friend repeated that phrase so damn often that I had no choice but to learn it!

“How many times do you have to hear a word or phrase to learn it?”

The answer is, of course, that you never know.

However, we can just keep it simple by saying:

“Quite a few times!”

That's right! Research into literacy development suggests that it might take up to 17 exposures to learn a new word.

And that’s in your mother tongue – a language you already know.

So, in a foreign language, it’s often going to be a lot more.

You need to see new vocabulary a lot of times in order to learn it.

Why You Have To Go Beyond Your Textbooks

Let’s go back to my lovely phrase “Qué tonto eres, tío!” and think what might happen if you learned that phrase in a textbook.

You are, of course, unlikely to learn a phrase like “Qué tonto eres, tío!” in a textbook!

(That’s probably a good thing … being a “high-risk phrase”!)

But even if you did find this phrase in a textbook…

How many times would you see it?

Once, in a dialogue?

A third time … if there’s a review section?

You might, then, practise the phrase a few times, depending on the focus of the class.

(Which would be quite funny to see, actually, a class full of Spanish students telling each other how dumb they are!)

You’re basically shown this new phrase once or twice, and you’re on your own!

That’s all the help you get.

In the next class, you’re on to the next chapter, with completely new information…

And the whole cycle starts again.

So you’ve got to critically examine claims from textbooks that tell you:

The important thing is this:

Seeing something new in your textbook is just the beginning.

The rest of the work is still to come.

There’s a big gap between seeing a new word for the first time in your textbook… and internalising that word, so you truly know it – inside out & back to front!

And you fill that gap with one thing:

Review. The inconsistency villain won't like you doing this, but it'll work wonders for your progress, so just ignore them!

One of the cornerstones of your language learning routine should be to go back and review things you’ve learned before.

The month before, for that matter.

The magic happens when you see it over and over again.

Now there are lots of ways to review new vocabulary…

You can find a friend like Tomás, who gets a perverse pleasure out of telling you the same stuff over and over.

But if you’re not lucky to have a friend like that, then there are lots of things you can do to learn a new word or phrase.

Or my personal favourite…

What matters is that you deliberately review what you’ve learnt.

Do that, and you’ll find new vocabulary sticking in your mind far more reliably than before, so you can feel a stronger sense of progress and satisfaction in your learning.

Now, let me give you one very simple way to take action on this right away.

You don’t need to write anything.

You don’t need to “study” anything.

One little repetition that’s going to be like crack cocaine for your memory. (In a good way)

(Just don’t go near the crack… ok? Be sensible.)

Just add these 10 little minutes into your study routine, and you’ll be amazed at how you just retain stuff more easily.

So give it a try, and let me know how it goes.