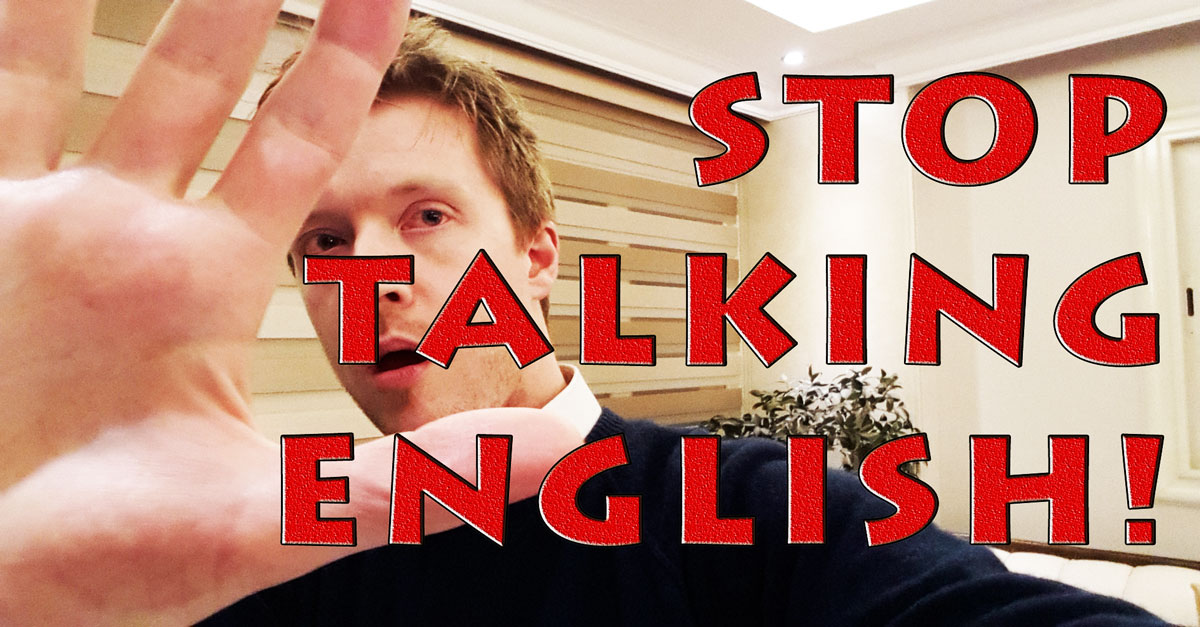 How To Stop People Talking To You In English

You're learning a new language, and it finally comes time to try it out with some native speakers!

So, you pluck up the courage, walk over to them, try your best to say something nice.

They look at you…

They think for a second…

…and they reply in English!

You want to keep talking in your new language, but you also don't want to offend them. So you smile and switch back to English, trying to hide your disappointment.

How can you stop this happening?

I tracked down 12 of the world's most experienced travellers and language learners, and put this very question to them.

By the way, if you want to speak your target language thanks to a fun and effective method that teaches you through stories, not rules, check out my StoryLearning® courses and claim your free 7-day trial.

Simply tell them you want to practice their language. When they respond in English, ask them to respond in their own language.

Usually, if you do this once and they understand you are trying to learn, they will continue to respond in their local language and quite often, try their best to help you learn what they are saying.

Stopping people from speaking English back to you can be tricky without causing offence.

But if the person seems like they are genuinely trying to help, I might just ask them to speak to me in their language as I'm trying to learn and would appreciate the practice. Ultimately though, the best way to stop this from happening is to learn more, get more confident, and sound like you can handle whatever they throw at you. This can take a few attempts.

Have fun with it, see it as a game, and try and get as far as you can into each conversation without slipping into English, then try and beat that record.

Go to a place where they don't know English.

That's how my Mandarin improved so much. I spent time in rural China where I had no choice but to speak it.

Kristin Addis – Be My Travel Muse

Here are three strategies I used to overcome this problem in the Netherlands.

I usually explain to the native speaker that I am really trying to learn to speak his language and so he would really help me out by talking with me in his own language instead of mine.

This often works as I believe that if people know they can do something to help you, they'll do it.

There are many reasons people may speak to you in English, so I try to find out their motivation and satisfy that, in such a way that doesn't involve switching away from the language that I'd like to practice.

So for instance, if they want to use me for English practice, I have the “give a man a fish and you feed him today, but teach him how to fish and you feed him for life” mentality and realize I can help them so much more by giving them tips on how to find English speakers (local expat communities if I'm in their country, or online language exchanges), how to learn English (since I was an English teacher for several years, and know lots of tricks for learning languages in general of course), or whatever can help, but do all my explaining in their language.

Realistically, this is being way more helpful to them than 10 minutes practice with someone who'd really rather not have been involved.

Generally though, just being straight with people and saying that I'd really prefer not to speak English will get through to them most of the time. People are nice and patient, you just have to make your needs absolutely clear to them and they'll help you out!

When practicing another language abroad I tend to always butcher it leaving the local speaking English back to me. What I’ve tried to do in order to better myself and get out of English is ask the local the correct way to say something, this can often get a few locals involved and everyone has a good laugh at my misfortune.

It won’t exactly stop them speaking English but its a start. If you ever go back to the same place multiple times you’ll find they can test you out by at least letting you try a second time around.

There are many ways of achieving this, but here are three I have been using successfully:

If you are in a group of people in a social setting, its even easier, just ask. You can simply state that you are trying to improve your target language and that it is helpful if they stick to that language. Native speakers are usually more than happy to oblige and enjoy helping a new learner.

Luca Lampariello – You can master any language with Luca here

When people default to English, they are presumably trying to be polite, or maybe they feel sorry for me as a (presumably) helpless American, so the question is, how do I redirect their energies so that they link their generous impulses with forcing me to speak their language instead?

I simply take the blunt approach. (I’m American, after all!)

I explain to them that it is very important to me to learn something of their language, and that if it is not too big an imposition for them to deal with my remedial skills (I feel this piece is important, as it is not their job to teach me!), they will be doing me a huge favor if they allow me to speak to them in their language.

If that doesn't work, there is always pouting or bribery.

I have tried a few tricks over the years to avoid using English with people.

Richard Simcott – Speaking Fluently (finally back in action on the blog!)

I think it depends who you talk you to. If you are talking to a stranger you could pretend as if you don’t speak English. I think that is the easiest way.

In China, I used to pretend that I was from Russia. They don’t expect Russians to speak English very well and would therefore speak Chinese with me.

If you want to practice your new language with a friend who keeps replying in English, I explain that I came all the way from Holland with the goal to learn his/her language in a few months and that I would find it very cool if he or she would only speak his native language to me.

If the person agrees but switches back to English you can just ask: ‘’O que voce fala?, 你说什么?’’ and they will switch back to their own language. If someone really doesn’t want to help you practicing their language it might be time to consider spending time with someone else who does.

And finally, here's my perspective…

So there you have it!

I hope you found some inspiration to tackle this problem for yourself.

What's for sure, this is something that affects everyone, so you're not alone!

Ultimately, the only real solution is to get your level in your target language to a point where it's better than the other person's English!

At that point, it makes no sense for either of you to speak in English. And if you want to do that in a fun and effective way, take a look at my StoryLearning® courses.