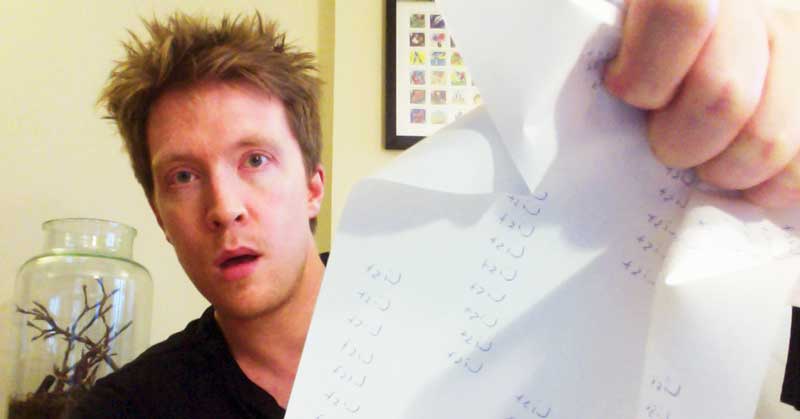 How To Use Vocabulary Lists To Instantly Improve Your Communication Skills

If you're my age or older, your foreign language homework at school probably looked like this:

“Here's a list of 10 French verbs. Learn them all for a test next Tuesday.”

Many years later, you stumble across blogs like mine, and you're told something different:

“Learning lists of words is wrong…use xyz fancy method instead!”

Indeed, for a long time, I thought learning lists of words in a foreign language was bad.

But now I'm not so sure.

In fact, I've been learning a lot of lists of words recently.

And it's been working rather well.

Keep reading, and I'll tell you why you should probably be learning lists of vocabulary too.

It may not be cool. It's certainly not sexy.

But the tactic I'm about to describe will grow your vocabulary in key areas, and immediately help you express yourself better.

By the way, if you're interested in learning and remembering vocabulary naturally, as you read stories in your target language, then you'll love my StoryLearning courses: get a free 7-day trial here.

…as an overall strategy for learning a language.

And the reasons are many:

If your main approach to learning a new language was to memorise lists of vocabulary… you wouldn't get very far.

But here's the thing.

When I memorised those lists of French words back in school…they were actually quite useful!

I remember being able to recall those words for the Tuesday test (and get high marks), but more importantly, actually use some of them when I went on an exchange trip to France.

So the antiquated technique of learning vocabulary lists should never be dismissed out of hand – it clearly has a place. And for people like me, who are even partial to a bit of rote learning from time to time… it can even be fun!

It's a tactic. But it's not a strategy. Or a method like StoryLearning®.

You don't want to do too much of it… for all the reasons listed above.

So how can you be smart about it? How can you integrate learning lists into a wider, more holistic language learning routine?

The key is to carefully control what words make it onto your lists in the first place.

Forget about the word lists in your textbook. You can't afford to spend time learning everything they can throw at you.

Instead, create your own word lists out of vocabulary that you urgently need to learn.

I call this The Troubleshooting Technique.

Let's imagine that you've identified a bunch of words that you're always lacking when you speak your target language.

Ten is a good number.

Ten words that always stop you in your tracks in the middle of a conversation.

Ten words that make you want to scream when you can't remember them – for the 100th time!

Once you've got them, you'd write them down in a list.

Then you'd learn them.

This is the “Troubleshooting Technique”:

Identify ten words that are causing you “communication blockages”. Write them down in a list, and learn them.

Yes, we're talking about a bunch of words out of context.

Yes, this is a very unsophisticated technique.

These are lists that you have created based on your own needs, and is completely different from learning vocabulary lists that you've found in a textbook.

They're based on your needs, and solve your problems.

This is a similar concept to how I keep my vocabulary notebook under control. Although it's based even more on real communication problem:

After a few months learning Arabic, I was stuck.

I'd been studying quite hard and was already having regular conversations with native speakers.

But something was annoying me.

In every conversation, I would always be stopping mid-flow.

The reason was that there were a lot of simple words that I didn't know…and they were stopping me in my tracks.

Being at a low level, I wasn't able to paraphrase very well, and it was causing me communication problems.

After a while, something struck me.

Most of the words that were causing me problems, and forcing me to stop mid-sentence, were verbs!

Not difficult ones… just regular verbs!

“To put; to use; to go home” – for some reason I hadn't got round to learning them yet.

(Or more accurately, my textbook didn't see fit to teach them to me!)

Being a practical kind of person, I then did something that has become characteristic of my approach to learning languages.

“I need to know more verbs.”

“Not sure. Let's just write down ten verbs that I've wanted to use recently, but didn't know.”

And then I learnt them!

I just stared at that list for an hour and committed them to memory. (This was never going to be sexy, remember!)

But again… we're only talking about ten words here. I'm not asking you to memorise War and Peace!

The very next day, I was speaking with my colleague Nada.

We often chat in Arabic and talk about the same topics. The difference was clear to see.

Many of the little “vocabulary niggles”, that had been stopping my sentences mid-flow for months, were gone!

In fact, I even remember some of the things I said:

BEFORE: “After the class, do the students… uhh… um…”

NOW: “After the class, do the students go home?

NOW: “What time are we meeting later?”

Now, you may be looking at this and thinking: “Those are very simple words!”

And yes… but that was just the stage that I was at in my Arabic at the time. If I was more advanced, exactly the same principle would apply…just with more advanced vocabulary.

The point is simple: In less than 60 minutes, I was able to hunker down, focus deeply, and take an intentional step forward in my Arabic conversation.

Take Control Of Your Learning

What needs troubleshooting in your own language learning?

Whatever your level, you will have your own “ten words”.

I've written a book about my strategy for memorising words, which you can check out here.

You might dismiss rote learning, saying that you prefer to learn vocabulary “naturally” – from a textbook, from a newspaper, or from conversation. In fact, the most effective way to learn naturally is by reading stories.

But, by using the Troubleshooting Technique, you cut right to the chase.

You take control of your own learning.

You say: “I know what's holding me back, and I'm going to deal with it right here, right now.”

You sit yourself down.

And you get instant results.

Do you know anyone who's struggling to speak another language? Let them know by sharing this post on Facebook. Then leave me a comment below – would this approach work for you?