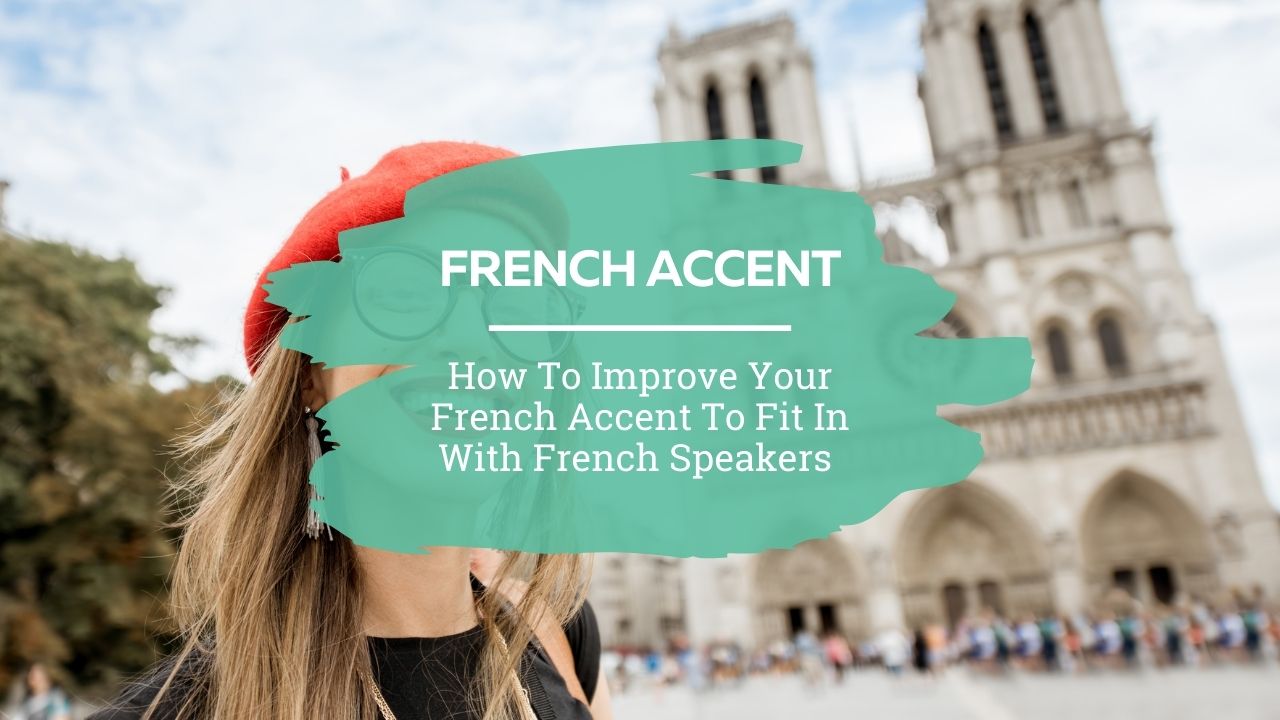 Learning French and want to improve your French accent? Mastering the pronunciation of any new language can be tricky, but if you want people to understand you, it’s something you’ll need to work on.

For those learning French, things are no different, so if you’re having trouble with producing the sounds of the French language, in this post I’ll give you some vital tips for improving your French accent.

Why Is French So Difficult To Pronounce?

Why is French so difficult to pronounce? In fact, this is the wrong question to ask because French accent isn’t really that hard for speakers of English to master.

Sure, there are a few sounds that don’t exist in English that might cause you a little trouble at first, but by and large, French phonology is relatively straightforward.

A better question to ask would be, why do people find French difficult to pronounce? And we can break the answer down into three main parts.

The first is that non-natives can have trouble reproducing certain French sounds accurately because those sounds don’t exist in their language. In other words, they know what the sound is supposed to be, but they can’t get their mouth to produce it.

The second is that people read French wrong. This is not a case of not being able to pronounce the sounds – it’s about seeing the words on the page and then reading them incorrectly.

When you hear a French word, your brain processes the sound as the nearest English equivalent, and when you repeat it, you pronounce the English sound instead of the French one.

The good news is, when you isolate the difficulties like this, it becomes much easier to improve, and just being aware of these three points will help you improve your French accent on your own.

So with this in mind, now let’s look at some of the most common pronunciation mistakes people make and talk about how to correct them.

We can start by looking at a couple of the most common problems learners have with the vowel sounds of French – and how you can avoid these problems.

One notorious pair of vowel sounds that English speakers struggle with is ‘u' and ‘ou', as found in tu and vous, the informal and polite forms of “you”.

The problem here is that neither sound exists in English, and the closest we have to either is the ‘ou’ in “you”. As a result, many beginners pronounce tu like the English word “to” and pronounce vous to rhyme with it.

This is partly because people struggle to reproduce the correct sounds. But it’s also an issue of not hearing the sounds clearly and being able to distinguish between them.

However, it’s important to pronounce these sounds accurately because to native speakers, they are completely different.

Furthermore, mispronouncing them can lead to some embarrassing mix-ups. For example, the French word for “neck” is cou (sounds like vous), but if you pronounce it as cul, it becomes a crude word for your “behind”.

A good way to learn how to make the tu sound is to first practise saying eu, the past participle of the verb avoir (to have). It sounds the same but without the ‘t’.

First, make the ‘oo’ sound from the English word “food”. But then pull your lips right back in an exaggerated smile and try again. Now when you say ‘oo’ with your mouth in this position, the sound that comes out will be the French eu.

After mastering this, you can then practise other French words like tu as well as lune (moon), and inattendu (unexpected).

To make the vous sound, put your mouth in the position to make the English vowel sound in “you”. But then pull your jaw down further and make your lips more rounded.

Once you get it right, you can then practise other words like chou (cabbage), trou (hole) and so on.

French nasal vowels are not difficult to pronounce. But since they are not quite the same as in English, some people don’t pronounce them correctly. This is mostly related to reading the word wrong or not hearing the sound correctly.

For example, take the word vin (wine). Some people might pronounce the ‘n’ as it would be in English, so it comes out sounding like “van”.

The correct sound is closest to the ‘-ang’ in the English word “angle”. But cut off in the nose so the ‘g’ is not fully pronounced.

(However, note that in southern and south-western French accents, the ‘ng’ sound is stronger, sounding more like ‘vang’ or ‘ving’, depending on the region.)

Other nasal vowels are found in words like mon (my), and en, (in, to etc.). Both vowels are different, but both finish with the same ‘cut off’ sound in the nose, just like with vin.

These sounds are relatively easy for speakers of English. And most people won’t have too much trouble reproducing them once they realise what they are aiming for.

The important thing to remember is that the sound ends in your nose rather than being fully pronounced. Listen carefully to what native speakers say and try to copy the sounds they make.

Now let’s move on to having a look at some of the consonants that learners of French can have problems with.

Written French famously has lots of silent letters. And this is something that may confuse people at first. But don’t let the written form of the words fool you.

Some consonants are usually silent at the end of words while others are usually pronounced. But there are also exceptions.

Remember also that many verb endings have silent letters. And particularly that the third-person plural ‘–ent’ ending is not pronounced, although it can affect the letters before it.

For example, the ‘–ent’in jouent is not pronounced, so this word sounds exactly the same as joue (from the verb jouer (to play)).

However, while the ‘–ent’in finissent is not pronounced, it changes the pronunciation of the preceding letters, so the ‘ss’ is pronounced (from finir (to finish)).

There is one consonant that is completely different from anything in English, and that’s the infamous French ‘r’. It’s a sound that comes from the back of the throat. And isn’t formed like an English ‘r’ at all, making it something that many people have trouble with.

However, there’s no need to worry too much about this sound because most people can produce a good approximation. And then after that, it will only improve with time.

To pronounce it, close your throat and put your tongue in the middle of your mouth so it isn’t touching the top, bottom or sides. Then blow air out from the back of your throat.

In a way, it’s a little like the noise you make when clearing your throat – but less harsh.

Some people might find this sound takes some work, but stick with it and you’ll get there eventually.

Another aspect of French that some people might find tricky is “liaison”. This is where one word merges with the next. So you pronounce words differently depending on the words around them.

For example, when pronounced in isolation, vous is pronounced with a silent ‘s’. However, if you say vous avez (you have), the ‘s’ is pronounced. And together, these two words sound something like ‘vouzavay’.

The basic rule is that if the first word ends in a consonant and the second begins with a vowel or silent ‘h’, you should pronounce the consonant.

However, there are a couple of other pronunciation rules to bear in mind too.

Here are some other examples:

Unfortunately, it isn’t just as simple as following these rules all the time because, while liaison must be used for many words, with some, it is optional.

For example, vous avez must always be pronounced with liaison. But with certain words like trop (too) or pas (not), its use is up to the speaker.

With words like this, using liaison will make your French sound more educated or “fancy” – so you are more likely to hear it in a speech than when talking to locals in a village bar – and the best way to learn it is just through exposure and practice.

Finally, be aware that words with a silent ‘h’ require liaison. But you pronounce those with an aspirated ‘h’ without it.

6 Tips For Improving Your French Accent

To finish, here are a couple of general tips that will help you improve your French accent.

#1 Pronounce Words In The Right Part Of Your Mouth

A good way to instantly improve your French accent is to imitate the uhh uhh sound a native speaker uses when hesitating as they speak.

Then, when you find the right place for this sound, try forming other French words in the same part of your mouth – and you’ll find you instantly start sounding more French!

An old trick for improving your pronunciation is to record your voice. Without doing this, you can’t know how your French accent sounds – and by recording it and listening back, you can work out which areas you need to work on.

Reading out loud is another great way to practise since it allows you to focus on pronunciation rather than on comprehension or anything else. It helps train your mouth to make the right sounds and improves fluency, so it’s an invaluable technique to use.

Use the “chaining” technique to build up sentences word by word. Start by repeating one word, then add a couple more and then a couple more until you can repeat the whole sentence fluently. This is great way to improve your French accent.

Listen to the way native speakers pronounce French and copy them. If you can train your ears to hear the sounds and train your mouth to reproduce them, you have already taken a big step in improving your French pronunciation.

#6 Close Enough Is Not Good Enough

Keep working at it and don’t accept that close enough is good enough. Don’t just pronounce sounds like their closest English equivalents but make an effort to reproduce the true sounds of French.

That way, with a bit of determination, your pronunciation will gradually improve until you sound much more like a native speaker.

Don’t Get Too Hung Up On Your French Accent

Even though I've spent this whole post talking about how to improve your French accent, my final piece of advice is not to worry too much about it.

It is almost impossible for non-native speakers to achieve perfect native-level pronunciation in a foreign language, and this should never be your goal.

Rather, your objective is to be able to speak clearly so that people can understand you without any problems. And if you strive towards that end, it doesn’t matter if your pronunciation is not quite perfect.