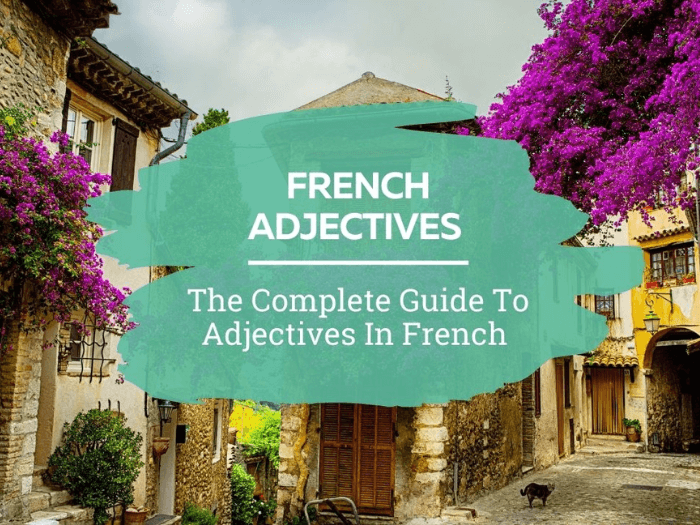 The Complete Guide To French Adjectives

When you're learning French, one of the most basic functions of language is to describe the things around you, and for this, you need French adjectives.

In French, adjectives are a relatively easy aspect of the language to master, but they don’t behave quite like English adjectives, and there are also one or two complications you need to be aware of.

So to help you get to grips with the basics, in this post I’ll give you an overview of the most important features and most common French adjectives so you can start using them correctly and with confidence.

Before we start looking at basic French adjectives, first we need to make sure we know what they are, so what is an adjective?

In short, adjectives are ‘describing’ words that are used to tell you something about the nouns in sentences. In English, they are words like “big”, “small”, “hot”, “cold”, “cheap”, “expensive” and so on. Look at these examples:

Here, “blue” and “old” are the adjectives that describe the nouns “ball” and “house” respectively.

In English, adjectives come before the nouns they describe, and they don’t change.

However, in French, adjectives usually – but not always – come after the noun they describe, and they also agree in both number and gender with the noun.

Usually, this is quite simple, but there are some rules you need to know about that can affect how it works. So, for the remainder of this post, we’re going to look at how regular adjectives in French are formed and where they come in the sentence.

Incidentally, demonstrative words like “this” and “that”, possessive words like “my” or “your” and question words like “which” and “what” are technically adjectives since they also describe nouns. However, I won’t be covering these kinds of adjectives in this post.

In French, all nouns are either masculine or feminine and either singular or plural, and they change accordingly. Therefore, you have masculine adjectives in French, feminine French adjectives, as well as plural adjectives. For example:

As you can see, we have four French adjective forms for intéressant depending on whether the noun it describes is masculine or feminine, singular or plural.

Also note in these examples that the pronunciation in French changes because in the feminine version, you pronounce the ‘t'. Depending on the adjective, pronunciation changes may or may not happen, so this is something to pay attention to.

Now let’s look at how to form common French adjectives.

The most common way to make French feminine adjectives is to add an -e to the end of the masculine form, as in the example we just saw.

Here are some other examples of common adjectives in French:

However, if an adjective already ends in an -e, the feminine form is the same as the masculine form, like this:

Nevertheless, there are many other possibilities, so now let’s look at some of the most important. Take a look at this list of French adjectives:

If the masculine adjective ends in -c, there are two possibilities.

You just have to remember which ending words take, but you should quickly get a feel for this. For example:

*Note here that grecque keeps the ‘c’ from the masculine form and that sèche adds an accent for reasons of pronunciation. Also, you may have noticed that adjectives for nationality in French don’t take a capital letter.

Adjectives ending in -er change to -ère, like this:

Adjective ending in -eur usually change to -euse, but -eure is also possible:

When the adjective ends in -teur, two endings are possible, -teuse and -trice.

Technically, the former is used if the adjective is derived from the present participle of the verb while the latter is used for all others. However, it’s probably just easier to remember them as you meet them.

Adjectives ending in -f usually become -ive, with the exception of bref (brief), which becomes brève. Here are two examples:

The -x ending usually becomes -se, but there are exceptions:

Doubling Of Final Consonants Before -e

In some cases, the final consonant is doubled before adding the -e. For example:

Some masculine adjectives ending in -s take an -sse ending in the feminine form:

Uncommon Or Irregular Adjectives In French

Other adjectives follow less common patterns, and some may be considered irregular:

This French adjectives list is not exhaustive, but it should at least give you an idea of how things work. For a more complete list of feminine forms of adjectives, you should refer to any good grammar book.

As a final word on this, although it might seem complicated at first, most people will master the basics through practice without making a conscious effort to learn all the French adjective endings. This means that as long as you are aware of the possibilities, it shouldn’t be that difficult to crack it.

As well as agreeing with the gender of nouns, French adjective rules state that the adjectives also need to agree in number. Let’s look at forming French plural adjectives.

When it comes to plurals, things are much simpler than with feminine forms since there are fewer possibilities and fewer exceptions.

Generally speaking, to form plural adjectives in French, you just need to add an ‘s’, and this is true of both the masculine and feminine versions of the adjective.

Furthermore, in most cases, the plural ‘s’ doesn’t affect the pronunciation, so you only need to think about it when writing.

Here are some examples from the adjectives we’ve already seen:

There are exceptions to these French adjective rules of course, and they usually only apply to the masculine forms. If the adjective ends in -s or -x, there is no change for the plural, like this:

(Note that since the feminine singular forms of these two adjectives are coûteuse and grise respectively, for the feminine plural forms, you just follow the normal rules and add an ‘s’, giving coûteuses and grises. The same is also true of all the other examples below.)

Others are irregular or unpredictable. For example, words ending in -eau add -x instead of -s:

Words ending in -al usually change to -aux, but there are exceptions:

Again, the best advice is to try to remember how each new adjective forms the plural when you learn it.

Position Of Adjectives In French

Once you know how to form French adjectives, the next thing to learn is how to use them in sentences.

Here are some examples of French adjectives that go before the noun:

To find a more complete list of basic adjectives in French, you can refer to any good grammar book.

There is actually some logic behind why these adjectives are usually used before the noun while most others come after it.

In fact, most adjectives can be used both before and after the noun, but the meaning is subtly different.

Placing an adjective after the noun makes an objective statement about the noun whereas if the adjective comes first, you are expressing a subjective opinion about it.

So when you say a beer is “good” or a boy is “nice”, it is almost always going to be a subjective observation. These are all French adjectives that come before the noun.

Conversely, with adjectives like colours, the description is always objective – something is “green” or it isn’t, there’s nothing subjective about it – so colour adjectives are always found after the noun. The same is true of adjectives for nationalities.

Special French Adjectives With Different Meanings Depending On Their Position

French also has a small group of adjectives whose meaning changes completely depending on whether they come before or after the noun.

Of course, this could even lead to sentences like mes propres mains propres, which would mean ‘my own clean hands’!

To summarise everything we’ve learnt about how to use adjectives in French:

With adjectives in French, I could go into a lot more detail, but it isn’t really necessary. What’s more important is that you know about the different possibilities and pay attention to them as you meet new words.

That way, you will begin to ‘get a feel’ for how to form particular adjectives and where to place them without needing to refer to the ‘rules’.

French adjectives practice takes some time but once you know that these rules exist and have a basic understanding of them, you will make sense of them as you continue to study, learn and improve.