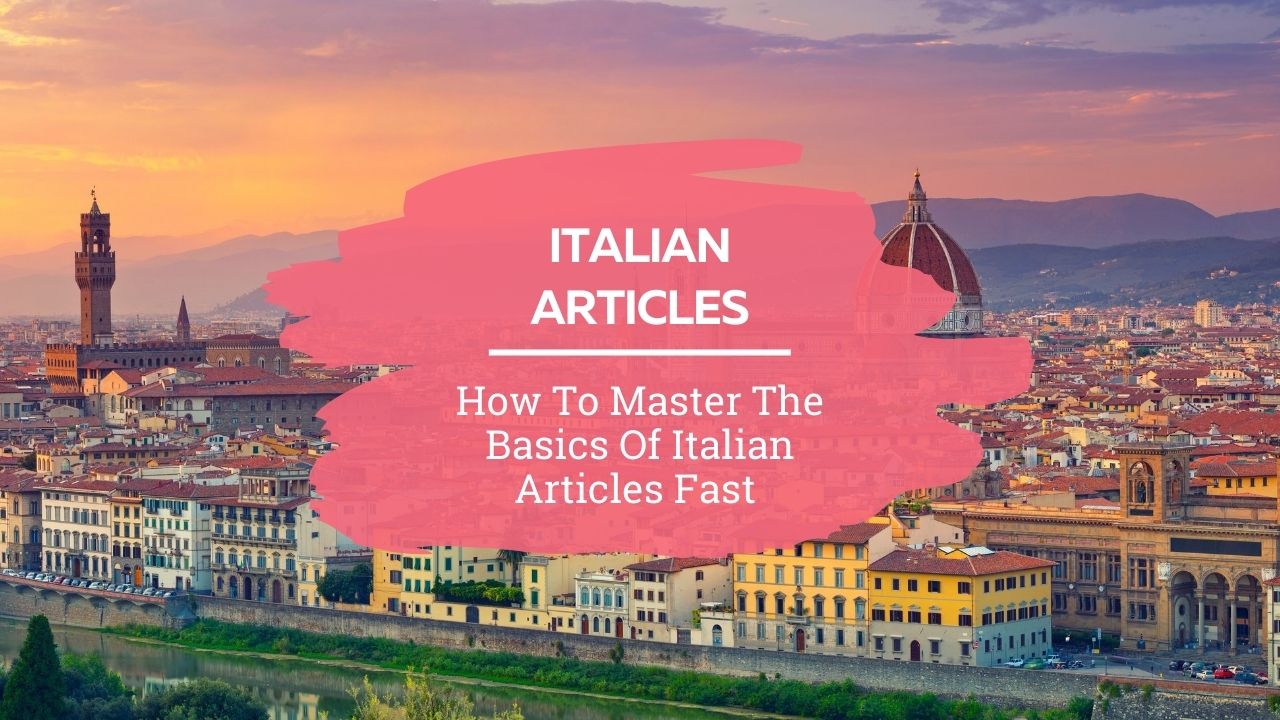 Italian Articles: How To Master The Basics Fast

Italian articles play a vitally important role in the process of learning Italian.

They are there to show which person, thing, or place we’re talking about. Articles occupy a special place within languages because they don’t work alone, but a lot of the time, the words (nouns) they are set before wouldn't work well without them, either.

If ever the articles in Italian seem too much when compared to the truly amazing simplicity of “a-an-the” English, just remember to be grateful you’re not learning German or Russian, because those are way worse.

Anyway, let’s get started. There are three types of Italian articles:

I will get into each type of article below and give you examples so you know when and how to use them. But first things first, remember that articles can generally be categorized according to two factors: the gender and the letters of the noun they are set before.

Definite articles are those that, by going in front of a word, determine (hence the name) the specific object.

You use these articles when you’re talking about something known, or a previously acknowledged thing. So while un libro can be any book, il libro is the book, meaning that specific copy of Romeo and Juliet, for example.

Let’s dive into the forms definitive articles can take, and look at some examples for each.

*This may seem strange because you wouldn’t use an article before the word “sport” in English, but in Italian, it’s pretty common. When saying “I play sports,” you would not use an article:

But when talking about sports generally, you would:

There is an exception: unlike in the cases above, when a word starts with ie, the “a” of the la does not turn into an apostrophe. This is only the case with a very few words, like la iena (the hyena) for instance, so it won’t be a big problem to contend with.

i – before consonant, so generally where the singular was il:

gli – before vowels, before s when followed by a consonant, or before z, in other words where the singular was lo:

le – this is an easy one, because it’s always le, even before vowels:

Indefinites are articles that refer to something not specific, as in un libro. While determinativi have a plural form, indeterminativi do not.

So that if you’re talking about undefined multiples, you’d generally use the third article discussed below, or put an indefinite adjective in its place, such as qualche or alcuni, meaning  “some.”

un — before consonants and vowels both:

uno – before words that start with s and a consonant, and before z :

except for when the word starts with a vowel, in which case the a is dropped, and an apostrophe inserted, without a space, before the word:

Articoli Partitivi – That Other Article

The partitivo is an article you use when something is even more unknown, or unspecific than the indeterminativo, something like one part of a bigger whole, an uncountable (words you can't put a number before or make plural like “milk” or “advice”), or at times when the amount or number of something is irrelevant.

Single partitive articles are there to talk a part of something bigger that’s undetermined, like a glass of juice for example, where it doesn’t matter which part of the juice you get, long as you get some. So that:

… is another way of saying vorrei un po di succo.

del — when you would use il:

dello — where you would use lo:

In the plural, the partitivo indicates an indefinite quantity of an otherwise countable number (that you can make plural or add a number before), like this:

Note: without the partitive, this would be: Mario ha alcuni cani cattivi, with no difference in meaning in English.

Both Mario’s dogs and the boys are, technically, countable. In the case of the mean dogs, we want to express that Mario has a bunch of dogs but only some are mean (without specifying which ones) and in the case of the boys, it doesn’t matter how many there were, just that we saw some.

degli – S+consonant, or before z, but also before vowel:

The good news about the partitivo is that, unlike the other articles, it can, in the majority of cases, be omitted. There is in fact no situation in which you can’t get by without using it.

So if this all feels a bit too heavy for now, just skip it until you’re comfortable with the other two, much more important types of articles.

Articles are not ordinarily used in front of names, unless there is a signifier (or a sort of title) before them, so:

However, in some regions in Italy, first names are often preceded by an article, especially as a sign of affection or familiarity. You will hear this done in Milano, especially, and all over Lombardia.

Articles can be placed before last names if one is talking about the entire family, like i Ferrari as a group, or a woman whose first name is either not known or the last name so iconic that it stands alone, because everyone knows who la Loren is.

Articles are not used before names of your own family members (or titles, really) like mia mamma or mia figlia, but when talking about other people’s families using the word loro they are used, so it’s la loro mamma.

Also, you put articles in front of plural family member titles, like le mie sorelle, and whenever there is an adjective before the family title: la mia cara mamma.

They are put in front of geographical names, such as those of mountains, lakes, countries, continents, etc: il Lago di Garda, il Gran Sasso, l’Europa, la Sicilia. However, they are never put before cities: Roma, Milano, Napoli etc. don’t have articles.

When you encounter foreign words, you should choose the article playing it by ear, as the pronunciation is the only indicator of which there should be: la star, il jazz

Very importantly, in Italian, the “h” at the beginning of a word is mute, so that you use an article with an aphostrophe because the first letter you actually pronounce is the second one, mostly a vowel: l’hotel (pron.: “otel”).

I won’t say articles are the easiest thing about learning Italian, but with a little practice, they quickly become second nature, and won’t be a pain to use.

The fantastic thing about Italian articles is that you will see and hear them everywhere in your learning. So pay attention to the articles as you read books in Italian or listen to Italian podcasts.

When you apply the StoryLearning® method, you'll learn the articles naturally through exposure to Italian, especially if you immerse yourself in Italian short stories.

So get out there and immerse yourself in Italian as much as possible and you'll soon be using articles with ease.