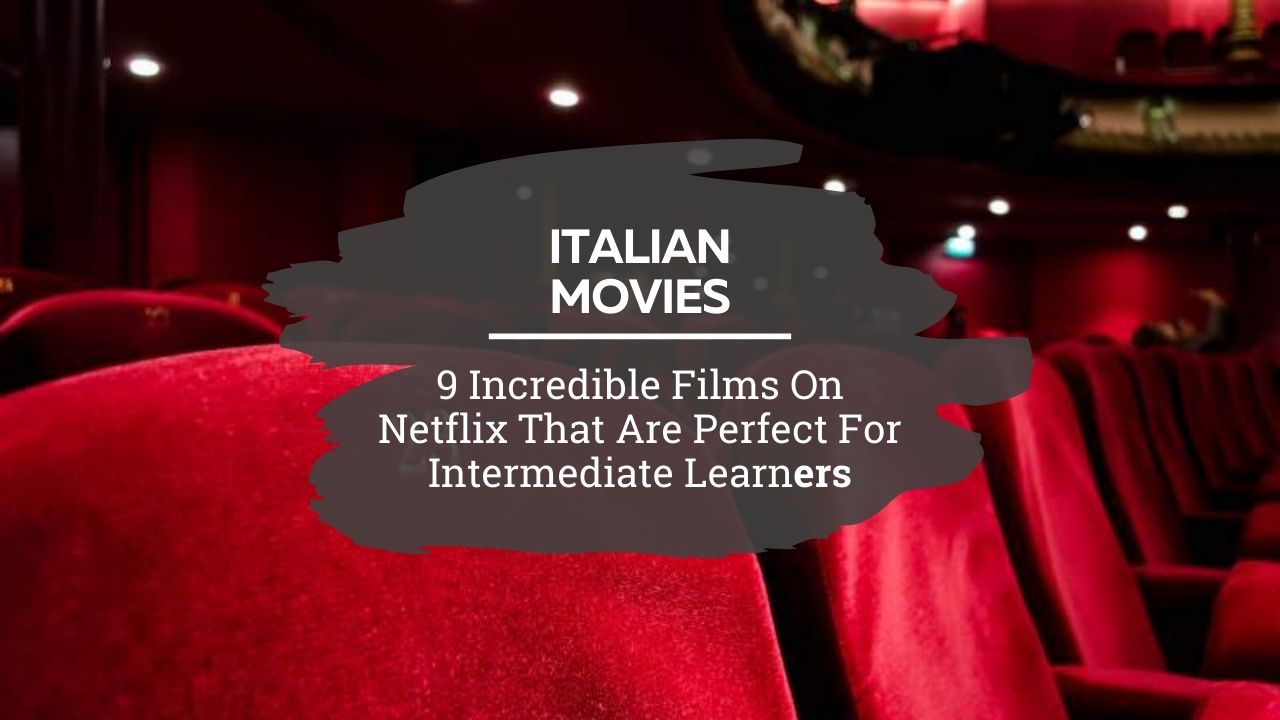 If you want to learn Italian without moving all the way to Italy, then you'll need to immerse yourself in the language at home.

One of the more enjoyable ways to do this is to watch Italian movies on Netflix! You'll be able keep yourself entertained while learning at the same time.

Thanks to movies, you can improve your conversational grammar as well as your vocabulary. And you can even assess your comprehension level.

Watching an Italian movie sounds like fun right? But you're probably wondering what you should watch among the huge variety of Italian cinema out there.

Well, you’re in the right place. In this post, I'll countdown my top nine favourite Italian movies that are available to stream on Netflix.

I chose these movies especially for intermediate learners. You'll find that they don’t have too much challenging dialect, and they include plenty of real life dialogue to help you get used to the style and speed of native speech.

Toss some popcorn in the microwave and let’s get started with the countdown!

By the time you finish Conversations, you'll be more than ready to tackle the fantastic movies coming up in this list…

My Top 9 Italian Movies On Netflix

La Pazza Gioia is an awesome tale of friendship between two women. Two women who just so happen to be escapees from a psychiatric hospital.

One is quiet and introspective while the other is talkative and in-your-face.

Watching them search for happiness in the world outside the hospital's walls is a moving experience that I highly recommend.

Get ready, comedy fans! Benvenuto Presidente! was released in 2013 and is a hilarious watch.

A passionate librarian in a sleepy Lombardy village happens to share his name – Giuseppe Garibaldi – with the famous Italian general who helped bring about Italian unification.

He's taken completely by surprise when a fluke in Rome and a deluge of write-in votes for the general election result in… him becoming president! You’ll be rolling on the floor with laughter as you witness his madcap adventure as President of Italy.

In the opening scene of Fiore, a teenage Italian girl named Daphne robs a woman at knife-point. Then, she sells the woman’s cellphone and uses the money to buy a feast of chocolate and cookies.

The movie follows her to prison, where she falls in love with Josh, who's serving time in the men’s wing of the same jail.

Actress Daphne Scoccia plays the character of the same name with impressive depth, supposedly inspired by her own rebellious teen years. This movie is a touching coming-of-age story with an exciting, gritty setting.

I had to include at least one documentary. Fuocoammare was filmed on the island of Lampedusa, which lies between Sicily and the African coast.

Over the last twenty years, over four hundred thousand migrants have landed there. Fifteen thousand have died while attempting to reach Europe.

This documentary focuses on the daily life of a twelve-year-old boy in a fishing village.

It follows him through activities like climbing trees and making slingshots. But you can see that a crisis is unfolding in the background. This is both a moving and timely documentary.

Every Italian high school student studies the work of poet and philosopher Giacomo Leopardi. This movie tells the story of his life as a nineteenth century nobleman.

This is an excellent pick for lovers of period-pieces. In fact, it won awards for Best Costume, Best Makeup, Best Hairstyling, and Best Sets and Decorations at the 60th David di Donatello Awards (basically the Italian Oscars!).

Il Giovane Favoloso moves slowly, but rewards thoughtful and patient viewers with a staggering final sequence. Not to mention, the poetry included is, of course, superb.

Le Meraviglie is a beautiful movie – simultaneously gritty and whimsical. Times are hard on the farm where Gelsomina lives with her parents and younger sisters.

She works hard to help her father with beekeeping and honey production.

When an enchanting television show begins filming in the area and launches a competition for farmers to have their products featured, Gelsomina is determined that her family should compete with their honey.

Every shot in this movie seems like something out of a dream. It's a truly enchanting and moving watch that will not only keep you watching but might even an inspire you to book a trip to the Italian countryside!

Bianca Come Il Latte, Rossa Come Il Sangue starts off as a cute rom-com about teenager Leo, who has a big crush on an older girl named Beatrice at his Turin high school.

The film style is endearing, with lots of quirky special effects. Leo makes slap-dash attempts to win Beatrice’s heart with his nerdy best friend by his side. And mouths off to a new teacher who offers the class interesting insight.

However, things become a little less lighthearted when Beatrice is diagnosed with cancer.

You’ll definitely improve your contemporary conversational Italian while you watch Leo’s adventure unfold. And you’ll find your heart is warmer by the time the credits start rolling. 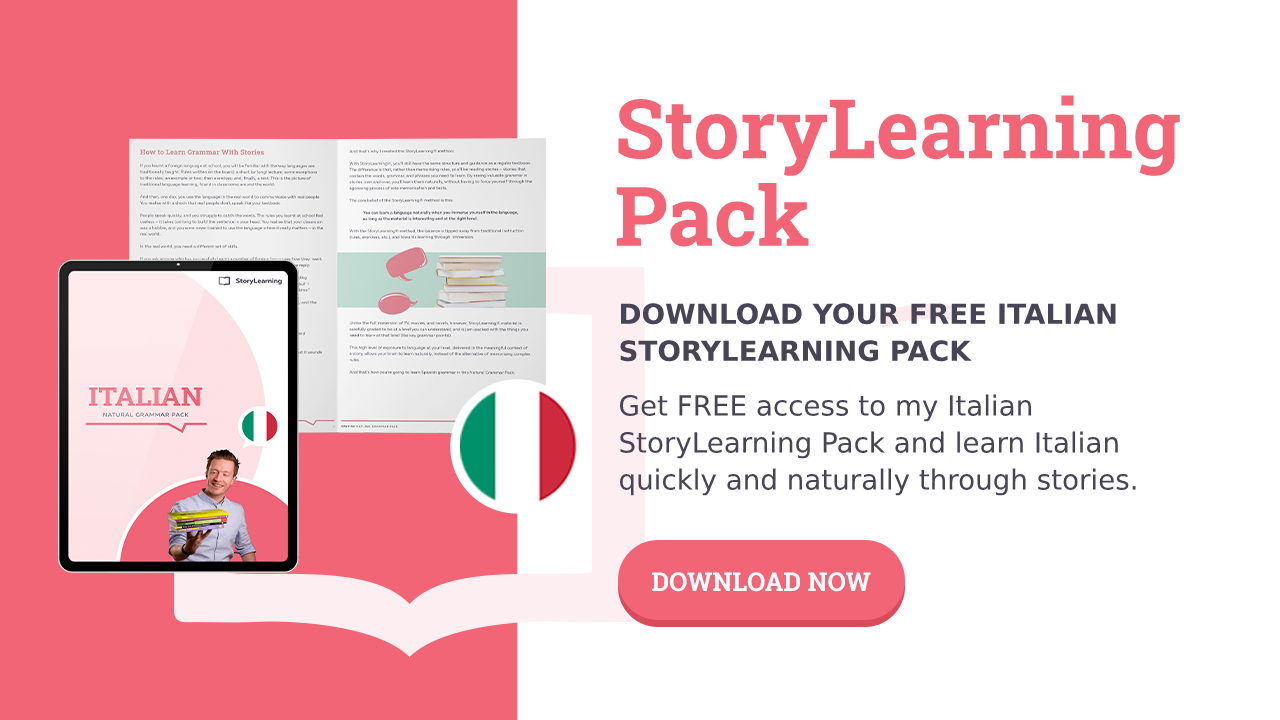 Cinema Paradiso is a must-see for film buffs and casual film fans alike. It won the Grand Prix at Cannes Film Festival in 1989 as well as Best Foreign Language Film in the 1989 Academy Awards.

It explores his childhood friendship with Alfredo, the projectionist at the local movie house, and his forbidden romance with the beautiful Elena.

The story is told with aching nostalgia and gorgeous visuals. Whether you’re passionate about postmodern films, or you just want to watch a movie with a solid coming-of-age story, Cinema Paradiso is a great pick.

As an Italian learner, the “cult” popularity of this film make it a must watch if you're serious about understanding more of the culture of the language you're learning.

In the #1 spot on my Italian movies on Netflix list is Roberto Benigni’s 1997 classic Life is Beautiful.

This movie is part drama, part comedy, part love story, and part war story. There is truly a little something for everyone.

Famed Florentine, Roberto Benigni starred in the film as well as writing and directing it.

You will absolutely fall in love with his character, Guido, who wins the heart of the girl of his dreams in the years leading up to World War II. The family is later sent to a concentration camp where Guido must use his cleverness and imagination to protect his young son.

It’s hard to imagine a comedy in a concentration camp, but this movie pulls it off with tenderness and beauty. You will laugh and you will cry (and you’ll improve your Italian, too)!

Creating an immersion environment at home is one of the best ways make Italian a part of your everyday life.

Moving abroad to learn Italian is not all it's cracked up to be and as my own personal experience shows, you can learn Italian just as well if not better from home!

With these 9 Italian movies on Netflix, you can enjoy an adventure into Italian culture and language right from your living room. Whether you want to watch a romantic comedy with a twist, a period drama or a documentary, you'll find it all on this list.

By the way, if you'd love to watch these movies, but listening is a struggle for you in Italian, then you're going to love what I've created for you.

It's perfect for you if you've ever felt frustrated listening to fast Italian. And let's face it, who hasn't?

It's a a set of dialogues (transcripts plus audio) that tell an intriguing story in 20 parts. It'll help you understand real spoken Italian and transform your listening skills in less than 90 days.

Find out more and check out Italian Conversations by clicking here.