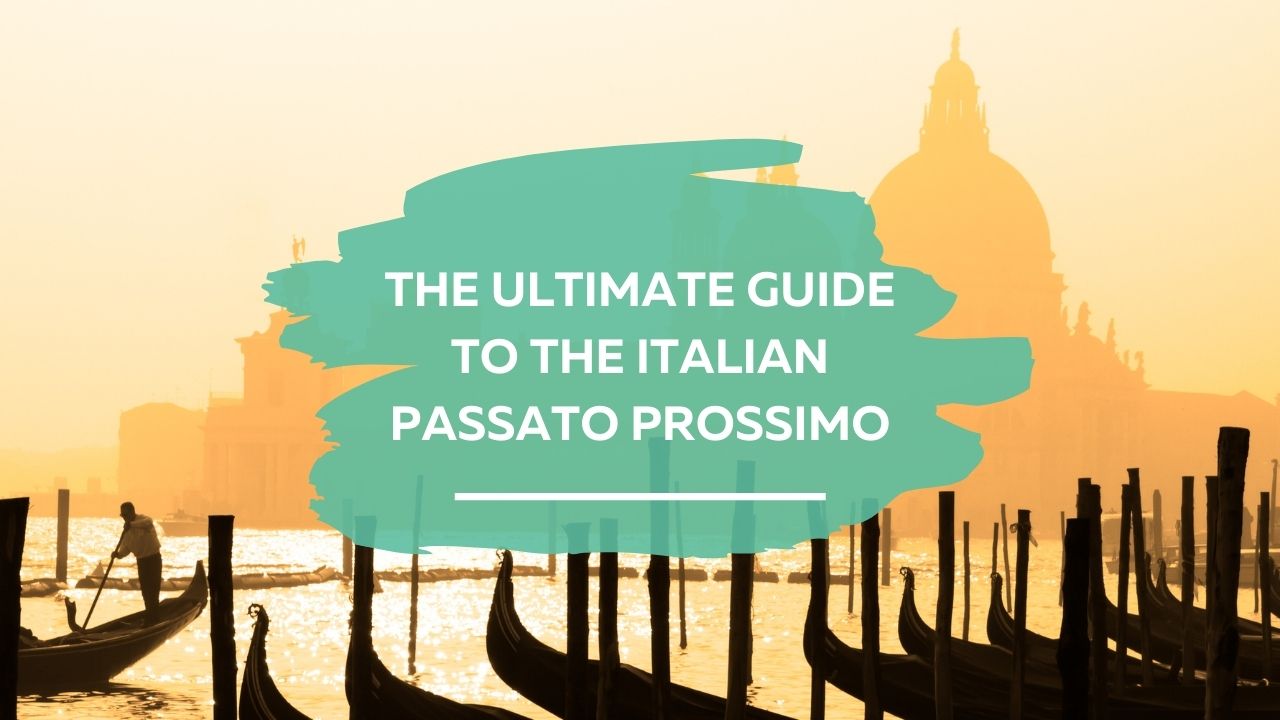 The Ultimate Guide To The Italian Passato Prossimo

When you learn Italian, you have to tackle different verb tenses, like Italian Passato prossimo, also known as perfetto composto.

This tense refers to the recent past — think of prossimo not in the context of “next” in Italian but as a relative to the English word “proximity.”

In Italian, both of these are called the passato prossimo, even though only one of them looks similar. But don’t mind all this for now.

You would use the passato prossimo at times when it’s unimportant to say how long ago something was exactly, or how long it lasted, just that it has happened, and that it happened relatively recently.

“Yesterday I went to see my grandmother” would, by definition, be passato prossimo, while “Columbus discovered America in 1492” would be passato remoto, a whole different story.

As for its linguistic history, passato prossimo was not used in classical Latin. The roots of this tense can be traced to later versions of the language, which is how it took hold in Italian dialects. Still, even today, certain southern regions use the passato remoto in their dialects where the prossimo would normally be used.

The good news is that you don’t have to worry too much about the remote past, because outside of a few regional pockets, it's mostly reserved for novels or legalese. When talking to Italian people, passato remoto won’t really come up.

What Is The Italian Passato Prossimo?

So then, let’s get down to business. Passato prossimo is something known as a compound tense, which means that it’s made up of two verbs.

The first of the two is some form of either essere (to be) or avere (to have). These are called auxiliary verbs, because they are there to support the main act, which is created by making a past participle of a verb.

This means that to learn how to form the passato prossimo, you need to be familiar with the conjugations of avere and essere. Because to do so, you drop the endings -are, -ere, -ire, and substitute -ato, -uto or -ito.

Here’s a little recap on the conjugation of essere and avere, just in case:

You can then, as mentioned, make what’s called the participio passato from regular verbs by removing the usual ending and tacking on one of these:

In the case of avere, it will look like this:

How To Choose Between Avere Or Essere?

So when talking about the past,  you’ll need to use either avere or essere. But how will you know which one?

First of all, just know that it sounds harder to get your head around than it really is. The majority of verbs use avere, just like in English (I have studied), because if there is a subject, the passato prossimo form of avere (to have) is the one that makes sense.

Meaning words like mangiare, chiamare, scrivere — those that you wouldn’t use alone, need avere. The way to make sure you’re using the correct word here is by asking what or whom — if you can answer it with a subject, avere is the way to go.

Easy enough, right? Things get a little trickier when there isn’t a subject.

When To Use Essere

Essere is used in cases where the verb indicates that there’s some sort of change, or movement: of location, for example, or of a situation.

This is the case for verbs like: andare, venire, partire, arrivare, succedere, diventare, salire, scendere, uscire, nascere, morire. All of these talk about something happening, someone going somewhere or doing some sort of active thing.

*always remember to adapt the ending of the verb according to the gender or number of people it refers to — more on that further down.

Verbs That Take Essere Or Avere

Certain verbs can be formed with either essere or avere, depending on whether we want to put emphasis on the action itself or on the effect that it had.

This is pretty straightforward, really. In the case of volare, for example:

(Emphasis on the act of flying)

(Emphasis on the fact that they are now on the roof, rather than how they got there)

Then, there are verbs which can either have a subject or not have one. When there is a subject, avere is used, while no subject means essere is the right choice.

Take the example of affondare (to sink) (a similar example in English is that you can sink (yourself) or sink something, drown or drown something, and so on) :

1. As mentioned above, if essere is being used, the gender of the person or the number of people must be reflected in the verb form:

2. If avere is being used, the subject defines the verb form whenever there is a direct object pronoun (known in Italian as pronomi clitici) like mi, mi, la, lo, ci, vi, etc.:

…but when there is no clitic pronoun, you don’t need to adapt it:

Another pretty important thing to remember is that there are both regular and irregular verb forms.

Irregular forms can be found in the case of essere (stato, stata, stati, etc.), fare (fatto) dire (detto), vedere (visto) and venire (venuto) — but that’s a whole other article.

In closing, passato prossimo isn’t that hard. There are some simple rules that are either logical or easy to learn and remember. So don't let the grammar villain get you down.

And if the passato is getting a bit too heavy, just take a break and move on to passata.

Because tomato sauce is another (very) essential thing in Italy, and arguably the more important one: what’s language when compared to the culture and tradition of Italian food?

Otherwise, to help you master the passato prossimo, immerse yourself in Italian, like you do in the StoryLearning® method. Make sure you read in Italian, or listen to Italian, and soon this tense will become second nature.