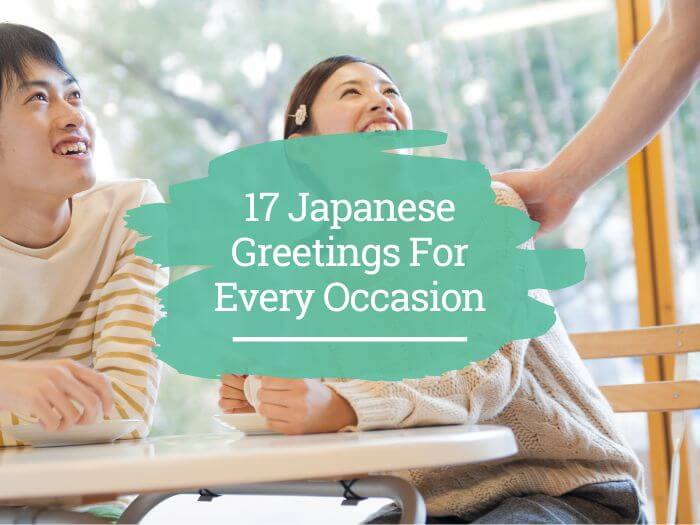 17 Japanese Greetings For Every Occasion

If you’re just starting to learn Japanese, either on your own or in a classroom, one of the first things you’ll probably want to know are Japanese greetings, such as how to say hello (and probably goodbye, too).

Japanese greetings can take many forms—just like in most other languages. After all, whether you’re making new friends or just saying hi to a passerby in the street, a lot of language starts with “hello.”

In this post, you'll not only discover how to say hello in Japanese, but also 17 different Japanese greetings suitable for just about any and every situation you're likely to find yourself in.

Get ready to impress your Japanese friends with these 17 Japanese greetings!

How To Say Hello In Japanese

There are lots of ways to say hello in Japanese—which is great, because that leaves you pretty flexible if your brain suddenly can’t remember one of them.

What’s even better is that if you’re intimidated by such a wide variety of choices, there’s really only one “hello” you need to remember:

While it’s true that konnichi wa (often written as konnichi ha, because the hiragana “ha” is pronounced “wa” here) specifically means “good afternoon,” you’re not going to get in trouble for using it at any time of the day.

Your basic hello in Japanese is going to be konnichi wa, but there are lots of other options too. Let’s first take a look at the greetings that live in the same family as konnichi wa: the greetings based on time of day.

However, there are other time-specific Japanese greetings that do still adhere to their corresponding time of day, and you may get some unusual looks if you use them outside of that context.

You might hear ohayou in certain niche contexts outside of morning time—such as when a person first clocks into work for the day, regardless of what time it is. But for general purposes, use ohayou gozaimasu until around lunchtime.

Just like with konnichi wa, the hiragana “ha” in konban ha is pronounced “wa.” Konban wa is slightly more formal than the others and often fades into use around 6pm or sunset.

Among friends and acquaintances, it’s fairly rare to hear konban ha; mostly, it’s reserved for more formal situations. Of course, you won’t offend anyone if you do choose to use it! They may simply say, “Oh, no need to be so polite!”

While you can certainly greet someone based solely on the time of day, there are a lot of other ways to say hello based specifically on the situation in which you find yourself.

Check out all of these options and pick out the one that suits the current situation best!

If you’re looking for a way to say good night, oyasumi nasai is perfect. This phrase, which literally means “please rest,” is used to say good night in two senses: both when you depart from seeing someone at night and when someone is going off to bed. Friends can shorten this phrase to simply oyasumi.

This greeting comes as a pair and means “I’m leaving/you’re leaving”.

This may be a new concept for non-Japanese speakers, but there’s a specific Japanese greeting for when someone is leaving but will be back later.

It's important to note that ittekimasu/itterasshai only work in locations to which you do actually intend to return. Thus, they’re most commonly used at home or at work. You wouldn’t say ittekimasu if you’re leaving a store, for example.

Paired with the above is another set of greetings—this time for when you come back from whatever adventure you were on in the previous example.

It works the same way: when you come back, you say tadaima! (literally, “I’m back”), and everyone who stayed welcomes you back by saying okaeri nasai (literally, “welcome back”). Friends can shorten this to simply okaeri.

When you are out in public, you may be greeted with a “welcome” by service workers at places like stores or the airport.

In this context, you might hear a generic “welcome” greeting; youkoso is more formal and a common element of signs in travel locations like train stations, and irasshaimase is very common in places like convenience stores as a way to say “welcome to our shop!”

In both situations, the employees are simply being polite to all of their customers; you're not expected to give a response. Similarly, you will never use these terms yourself unless you are an employee.

Most people will answer the phone by saying “hello,” but unlike in English, this on the phone “hello” is unique in Japanese.

It's common to answer the phone by saying moshimoshi to ensure that the other person can hear you. However, it is also acceptable to answer with hai (literally, “yes”) and then your name.

Most of the Japanese greetings above are reserved for standard politeness—that is, use with people who you know either only as acquaintances or strangers.

If you're very close to some of your friends, you can use more informal Japanese greetings instead.

Yahho is acceptable among friends or with children as a simple way to say “hi.” However, it is considered extremely informal, so it is best left to those situations where you know the other party extremely well.

Ossu is specifically reserved for use between close male friends. It too is very informal, and could even be correlated with slang phrases like “sup” (as in “what’s up”). Men of all ages can use it, but it's most common among younger men.

Of course, no greeting would be complete without a way to say goodbye as well. Unless you plan to stay joined at the hip with every person you meet for the rest of your life, you’ll need a way to bid someone farewell at some point.

If you’ve ever heard any Japanese before, you might already be familiar with the most iconic goodbye:

However, sayounara is not nearly as common as you might expect. It is used for extended goodbyes, where you do not intend to see the person again for some time, if ever. If you’re looking for something a little less, well, permanent, try:

Any of these options can be perfect depending on the situation, who you’re talking to, and how soon you expect to see them again. There is one exception to these farewells that you may have become familiar with, especially if you have heard Japanese in a work context:

When people are leaving work, they often acknowledge each other with otsukaresama (good job). Or the more formal otsukaresama desu, if speaking to a superior.

This word has no direct translation into English, but it conveys the idea that you are aware of how hard someone worked and are appreciating them for that effort. Think “nice work today, see you tomorrow” or “you must be tired after all that work, great job.”

You always say otsukaresama to your peers—never about yourself. Thus, most people will say it to each other as they leave.

Whether you’re just getting started with Japanese in general or you’re gearing up to practice your speaking and listening skills, Japanese greetings are a great place to begin.

Remember—practice makes perfect, and the best way to get used to Japanese greetings in their native contexts is to simply listen and engage with Japanese culture.

If you follow the rules of StoryLearning®, that looks like immersing yourself in the language by reading books in Japanese or short stories in Japanese.

Take it one step at a time and you’ll be wielding an entire vocabulary of greetings in no time!