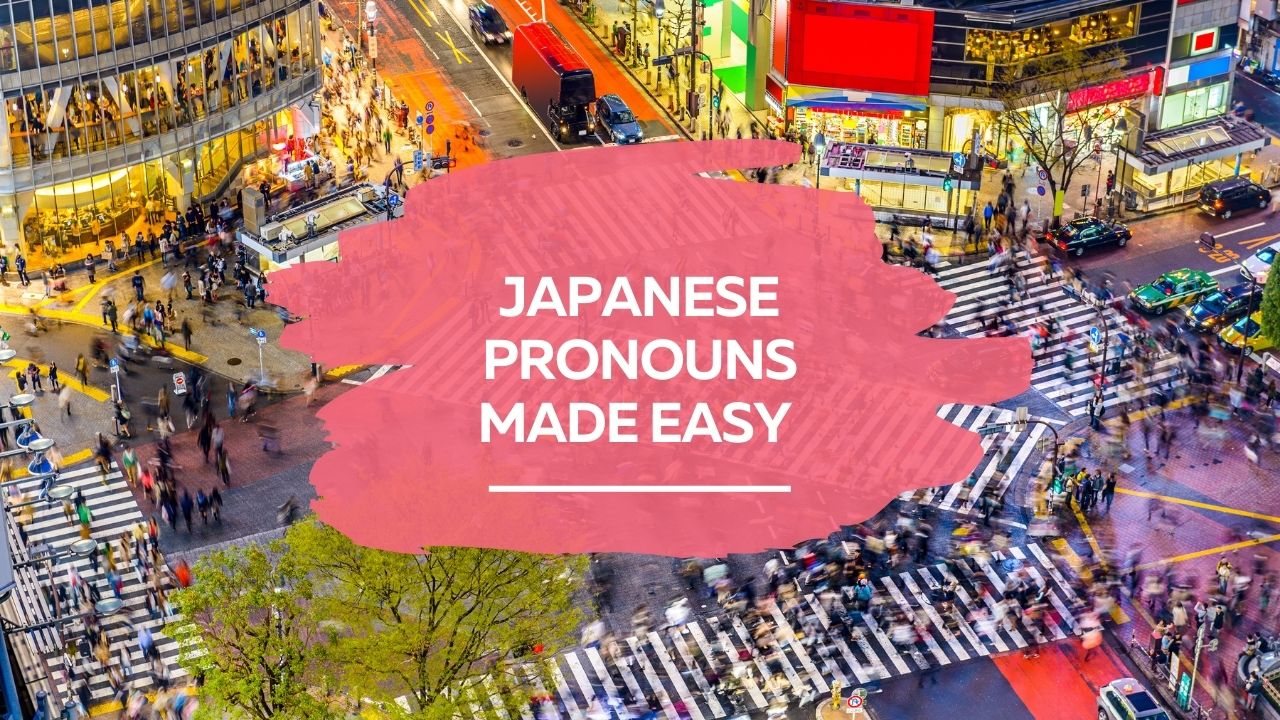 If you’ve spent any time at all learning Japanese, you’ve likely noticed that mastering even the basics requires understanding a lot of moving parts.

The good news is that Japanese tends to be very consistent—that means that once you understand how one part of a sentence works, you can count on it to keep behaving that way.

Pronouns in Japanese are the same. While pronouns function very differently in Japanese than they might in English—including not appearing at all sometimes!—they are simple to use once you buckle down and get a grasp on them.

To use Japanese pronouns correctly, you’ll need to consider not only personal pronouns but also demonstrative and indefinite pronouns too. Don't worry – you already know what these are in English, even if you don't know the jargon!

By the way, if you want to improve your Japanese quickly and having fun doing it I recommend Japanese Uncovered, my comprehensive beginner programme that teaches you through the power of story.

The course covers everything you need to know as a beginner in Japanese (including suffixes). Click here for a free 7-day trial of the method.

What Does A Pronoun Do?

Before you begin learning about pronouns, it’s important to make sure that you’re on the right page regarding what a pronoun actually is.

A pronoun is a word that refers to either a person or another agent in a sentence or utterance. In other words, things like “I”, “she”, “that”, and “everyone” are all pronouns (albeit of different kinds).

They are nouns that indicate what (or whom) you’re speaking about, but they’re not as specific as proper nouns. They’re the difference between “that’s a dog” and “Hachiko is a dog.”

Pronouns In English And Japanese

In English, you can expect to use pronouns often, especially when talking about yourself. In fact, it’s almost impossible to discuss what happened to you, what you’re thinking about, or what you plan to do without using the pronoun “I.”

However, in Japanese, many pieces of a sentence can—and often are—omitted while still being understood, and pronouns are some of the most common. You will find that pronouns such as “I” and “you” are much more rarely used compared to English, because they can be left out of the sentence entirely.

However, if you find this hard to wrap your mind around, don’t worry; you can definitely include them yourself, and you will not be incorrect. Just be aware that many native speakers will elect not to use “I” or “you” often simply to save time and avoid sounding redundant.

Another important difference between pronouns in English and Japanese is that Japanese pronouns are laden with much more information than their English counterparts.

When you say “I” in English, the only thing the listener or reader knows is that you are referring to yourself. In Japanese, “I” can take many forms that change based upon everything from the age and gender of the speaker to their job or social position. You can learn a lot about someone based only on the pronoun they use!

This also means that you should give some consideration for what pronouns you use for others; using an informal one on your boss may earn you a surprised double-take.

All of these words exist to help people explain their own existence in relation to themselves and other people.

In Japanese, most people will elect not to use “I” or “you”. Simply speak or write the sentence as normal, but omit the “I” or “you” at the beginning.

However, if you would like to use these pronouns—which is not incorrect, it only takes longer—your general best bets are as follows:

The simplest way to ensure that you do not offend or confuse anyone when using “I” is to use watashi, the all-purpose “I.”

It’s formal enough to be used with those of higher rank than you, but it’s not so formal that it sounds odd among friends. If you would like to be exceptionally formal, such as talking to someone of great importance, you can change this to watakushi instead.

Among your friends, you can actually differentiate yourself! If you're a girl, you may use atashi instead, and boys may use boku to refer to themselves with “I.”

It can be odd to use anata regularly in conversation; more commonly, Japanese speakers will opt to address the person by their name instead.

However, if you would like to use “you,” the most acceptable form across the board is anata. While words like kimi and omae also mean “you,” they are only used for those lower ranking than you and can convey an informal or even angry tone.

When it comes to “he” and “she,” it’s as simple as memorizing that kare means “he” and kanojo means “she.” These are the words to use, and there are not really any alternatives for you to choose between!

How Do I Make It Possessive Or Plural?

The particle no typically shows possession in Japanese, and it works with pronouns too. If you want to say “my,” you would say “I (possessive),” which would be watashi no. This works across all of the pronouns you’ve learned in the same way!

Most of the time, you will not need to pluralize what you say; Japanese does not place heavy emphasis on whether something is singular or plural like English does.

However, if you feel that you need to pluralize something, you may add –tachi to the end (watashitachi > we, anatatachi > you all).

Demonstrative pronouns, as their name may suggest, demonstrate things. They indicate where items or people are in relation to the world around them and the speaker.

The most common demonstrative pronouns are “this”, “that”, “these”, and “those”, but “here”, “there”, and “over there” can be included too.

Japanese, like English, operates using an understanding of distance relative to the speaker when creating demonstrative pronouns. This means that things close by will begin with ko-, things further away with so-, and things quite far away with a-.

To see this in action, consider:

You can see that the words change in predictable ways based upon the distance of the object or point of interest from the speaker (or relative to the listener).

You use indefinite pronouns all the time, even if you don’t realize it. They refer to people, amounts, or just general things that are not particularly defined. Think of words like “anything”, “everyone”, and “something” as examples of indefinite pronouns.

Take a look at the following list to boost your vocabulary of Japanese indefinite pronouns:

As you can see, many of these pronouns rely on particles like ka, the question particle, to slightly alter their meaning.

Did you know that even question words are pronouns? They are called interrogative pronouns, and they introduce some type of question in both English and Japanese.

These are some of the most useful pronouns that you can learn!

If you look closely, you can even see that these question words are used to create many of the indefinite pronouns listed above!

As you continue to expand your knowledge of Japanese, it can feel overwhelming to determine which aspects you should learn next.

Pronouns are a vital part of expressing basic information about yourself, your situation, and others, so they should be among the first items that you focus on.

However, some are more important than others; consider prioritizing personal pronouns and interrogative pronouns (question words) first so that you can establish a strong baseline for simple communication.

After that, you can work on demonstrative pronouns to give your speech more depth and context, followed by indefinite pronouns to refine the details. You don't need to learn everything at once!

The best way to learn any language, Japanese included, is to immerse yourself. In the StoryLearning® method, that means reading stories in Japanese at your level. Check out these Japanese books for inspiration.

You can also engage in real Japanese conversations and take note of which words you wish that you had access to; this can be a great indicator of where you should turn your attention next!