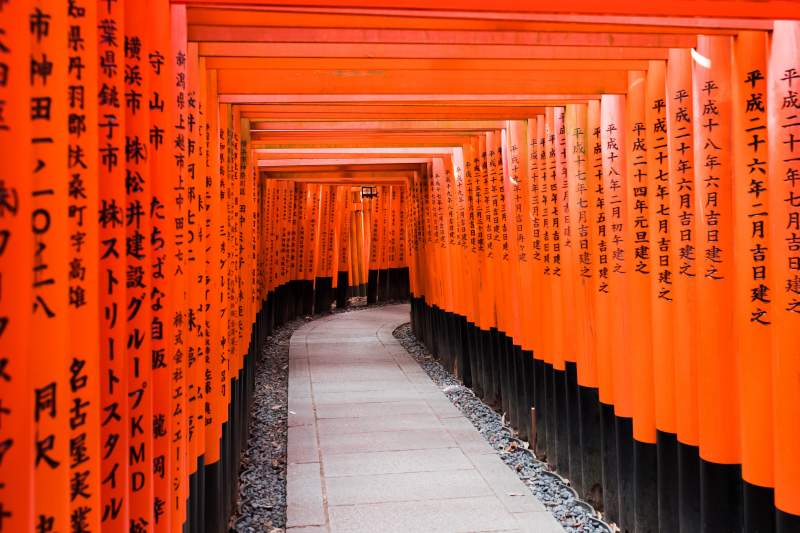 When you're learning Japanese verb conjugation is probably the least of your worries right?

After all, you’re no doubt busy thinking about how you’re going to learn all those kanji. And what order to put the words in, since verbs come at the end of Japanese sentences.

But conjugating your verbs in Japanese is a crucial part of learning to speak the language. The good news is that it's one of the easier tasks you’ll face when constructing a Japanese sentence. Phew!

In this article, you'll discover:

Read on to discover how to conjugate those Japanese verbs then.

1. What Is Japanese Verb Conjugation?

To “conjugate” a verb is to put it into the tense that you need to convey what you’re trying to say. In English, let’s take the verb “eat.”

All of these are example conjugations of the verb “eat.” At their most basic, verbs can be conjugated into present, past, and future tenses:

However, Japanese has 2 types of verbs to be aware of: RU verbs and U verbs. You might also hear these referred to as ichidan verbs and godan verbs. But the concept is overall easier to understand if you’re thinking about RU and U.

In Japanese, a verb will always end with either RU or U. Every time! Well that was easy. Now what do we do with that information?

Well, think of the RU and U as the part of the verb that you can remove, like the nose on a Mr. Potato Head. Pop it off and you have the verb stem, and that’s what you work with when you conjugate verbs.

The only thing that RU and U tell you are what options you have for conjugating a verb. Let’s take a look at what all this means with some real examples.

A great example of a RU verb is taberu 食べる (to eat). Chop off that RU and you’re left with tabe, so let’s start building from there.

When you want to say anything in the present tense, you’re going to be using –masu. That’s the “present tense ending.”

Stick that –masu right into the same place where you took off that RU and there you have it!

Want some exciting news? In Japanese, the same conjugation is used for both the present tense AND the future tense! Way to knock off two things at once.

But what about past tense with RU verbs? You're going to do the same thing, but instead of –masu, use –mashita.

Japanese RU verbs always conjugate this way. Remember these rules and you’ll be set to conjugate every verb you lay eyes on, even if you don’t know what it means!

So that wasn't too complicated was it? In any case, here's a quick summary for you to refer to as you conjugate your verbs and get used to this aspect of Japanese grammar.

4. How To Conjugate Japanese U Verbs

You’ve got your RU verbs conquered, but don’t worry—U verbs aren’t any harder. They’re just different. Instead of taking off the whole U like you did with RU, you’re going to be looking at what kind of “letter” U is.

Well, if you’ve seen a list of the Japanese letters, you’ve probably seen that they come in little families: ka ki ku ke ko, ma mi mu me mo, a i u e o, and so on. Let’s take a look at a few Us and figure out which family they belong in.

See how this is going? What you need to remember is that the U at the end might not be all by itself! It might belong to a family, like ku or mu.

Or, like you’ll see with the word utau, U might be all by himself after all (since au isn’t a family—in other words, it doesn’t have a hiragana all to itself like the other families’ members).

5. Why Do The Japanese Verb Families Matter?

Well, you need to know which family U belongs to so you know how to change it. Whenever you’ve got an U verb, you’re going to take the U part of it and remove it, just like you did with the RU verbs.

But instead of just tossing it in the trash, never to be seen again, you’ve got to hang onto that U—don’t forget what family it belongs to! That’s because you need to go visit that family and pick out the i version to swap in for U.

Let’s take a look at utau 歌う. Take off that U and you’ve got your stem, uta (which also conveniently means “song!” How nice.). Now hang onto that U! Don’t throw it away.

Go into its family (in this case, it’s the a i u e o family) and pick out the i member. Then conjugate away just like you did with your RU verbs:

Why is it important to pick out the i member? Let’s take a look at some more verbs to demonstrate:

We had to know who the i member of the family was in each case so that we could substitute in the i in utai, the ki in kiki, and the mi in yomi.

Or, if you want to look at this another way, slice off that U and then just insert imasu or imashita instead. That’s the practical application, and what we’ve covered so far is more of the reason why that works. 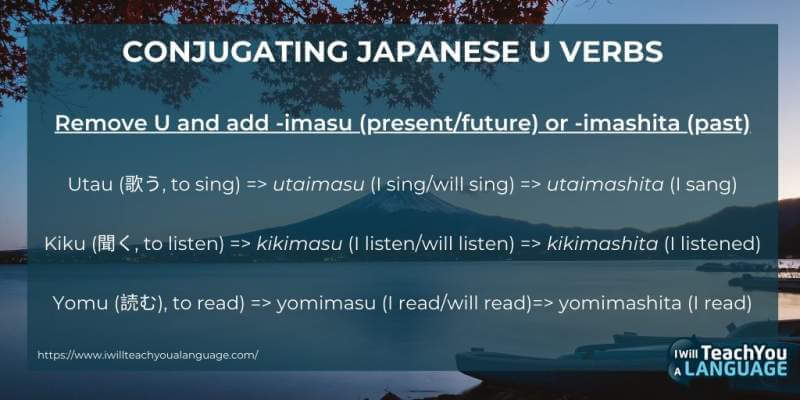 Before I move onto the exceptions (there had to be some, right?), here are some other conjugations to know to be able to say what you want in Japanese.

You just knew there had to be a few verbs that broke the rules!

Now and again, a verb that ends in RU could actually be a U verb in disguise. Tricky little fellows! One example is hairu 入る (to enter). Ah, it ends in RU, so it should be haimasu!

Not quite—the correct answer is hairimasu. That means it’s an U verb working undercover just to throw a wrench in your day.

So how are you supposed to know the difference? Unfortunately, there’s no easy answer besides learning which sneaky words are the exceptions. Some more you might encounter trying to pass themselves off as RU verbs when they’re really U verbs are:

There are also two very common verbs in Japanese that are all about doing their own thing. Early on, it’s best to memorise these separately, as they’re cornerstones for how other words work.

One of them is suru (to do). If you follow the RU verb rules, you’d produce sumasu; that definitely makes sense, but it’s not quite right. Similarly, the U verb rules would have you create surimasu, which is also not there yet.

Similarly, the verb kuru (来る, to come) follows suru’s example and acts like the rules don’t matter. So you’re left with:

Only two outliers in the whole language? Maybe that’s not so bad after all.

You’ve made it all the way to the end of your first journey into verb conjugation—nice work!

You might be feeling a bit overwhelmed, but don’t worry. What you need to know is that RU and U verbs follow a few simple rules. And the few U verbs that like to hide as RU verbs are words you’ll use often and come to remember and recognise quickly.

Soon, you won’t even have to think about what sort of verb you’re working with. Conjugation will become a natural part of your repertoire as you continue to practice. Particularly if you implement the StoryLearning® method and immerse yourself in Japanese through reading.

Keep showing up every day and keep learning all the verbs you can find! In no time, you’ll have a rich vocabulary that you can use in conversation to connect more easily with Japanese speakers.

And remember… if you want to get to grips with verb conjugation and other fundamentals of Japanese, enrol in Japanese Uncovered, my comprehensive training course for beginner learners.