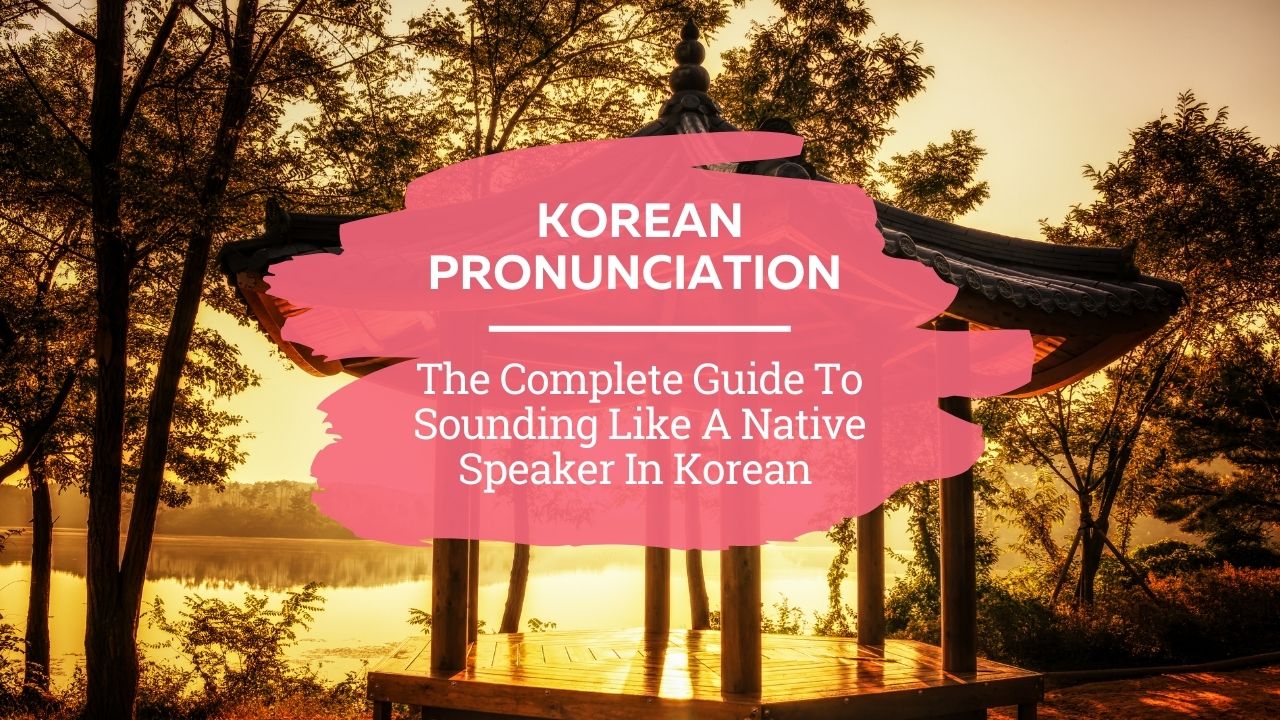 Korean Pronunciation: The Complete Guide To Sounding Like A Native

Want the good news about learning Korean? Compared to other Asian languages, Korean is relatively easy to learn. That’s because you can master reading and writing in just a few short hours.

What’s also nice is that Korean is mostly regular. That means aside from some exceptions here and there; Korean pronunciation is fairly easy.

Korean has a phonetic alphabet of twenty-four basic characters. This includes fourteen consonants and ten vowels.

Here’s a quick breakdown of how you pronounce each letter. I'll also include a few tips on how to work through a few of the trickier letters you might stumble upon at first but can get the hang of in no time.

By the time you’re done reading this, you’ll be well on your way native-sounding Korean pronunciation.

Korean has 24 letters in total:

The most important thing to remember is that there is no direct translation between Korean and English letters. It’s better to consider them approximations of each other.

For example, rather than thinking of it directly as “ㄱ=g,” it’s better to think of it as “ㄱ sounds like “gah as in garden.” The same goes for the remainder of the Korean letters.

Be sure to use the letter guide below accordingly: 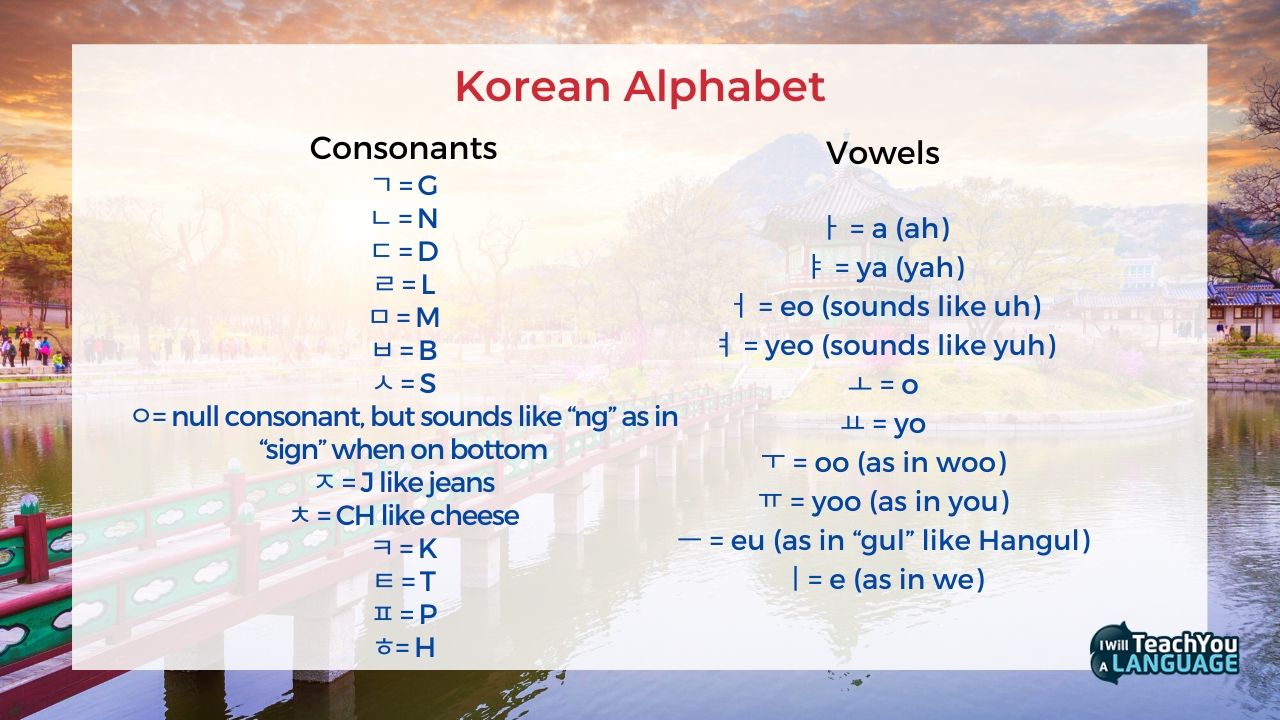 *Remember you never write vowels by themselves. They must always be paired with the placeholder consonant ㅇ. So ㅏ should be written as 아, ㅑ as 야, and so on.

The best way to practice is by memorizing how all the consonants and vowels sound together.

Now do the same for the remaining consonants on the list above.

Korean may have 24 letters, but you'll often see several “letters” that aren't on the list above. That's because some letters are combined into one.

Here's the thing—if you read each one individually, you'll still be understood. But if you want to sound fluent, you'll need to recognize and master the pronunciations of these letter combinations.

They come in two forms: double consonants and mixed vowels. And they're actually pretty common. You'll see them daily when you start speaking and reading Korean a lot.

But the more familiar you are with the alphabet above, the more they'll make sense and flow more easily from you.

Korean also has some mixed vowels and consonants. These form when you put certain sounds together. Say everything very slowly to yourself and you’ll hear how the sounds come together.

On the whole, Korean pronunciation is super easy. It’s actually easier than English because you don’t have tricky letters like “C” that could either sound like “cat” or “cereal.

However, there are a handful of tricky aspects of Korean pronunciation that can trip up new learners a little. Here are a couple of thing you should pay extra attention to.

1. Each Korean Syllable Is Pronounced With Equal Stress

Say the word “camera” to yourself. Notice how you emphasize the first part of the word to say it like CAM-er-a.

For Korean, syllables are pronounced with equal stress for the same length of time. Instead of saying “CAM-er-a” with most emphasis on the front of the word and little on the end, you say “Ca-Me-Ra.”

By the way, the word for camera is the same in Korean!

There is no direct sound in English like 으 or eu in Korean. So this can be tricky for new Korean speakers to get right.

It’s worth checking out some videos and watching the shape of people’s mouths when they make the sound.

When you pronounce 으, stretch your mouth wide and flat (picture a rectangle in your brain) and combine the sound “ew” and “uh.” And that’s it.

3. The Vowel 어 In English

The vowel 어 is written as “eo” in English. It’s easy to think it’s pronounced as “e-o” like “video.” But this is not actually how it sounds. This vowel is one of the top reasons why you should learn Korean as quickly as possible and stop relying on transliterations.

Instead, 어 sounds more like the “o” in the word “goal.” The best way to remember it is the word “Seoul.” You don’t say “SEEohul” but “Sole” The same goes with every other place you see 어.

4. The Consonant ㄹ As In Ramen

The consonant ㄹ is another sound we don’t really have in English. It’s somewhere between the letters “R” and “L.”

Koreans don’t say a hard “R” for ramen. Instead it’s softer and a little closer to “l” to sound more like “lah-men.” The key is curling your tongue when you pronounce it.

When ㄹ is at the end of a syllable it sounds, it sounds like the L in “curly.”

It’s a little tricky at first. For now just remember there is no strong L or R sound and you’ll start to pick it up over time.

From the chart above, you probably noticed that “ay” and “ay” both sound like “ay” and “ay.” Likewise both ㅒand ㅖ sounds like “yay” and “yay.”

There is actually a slight difference between the pronunciations of these letters.

It’s a subtle difference that doesn’t matter too much at first. But it does change the way a word sounds.

For example, there are two words that have a similar pronunciation with different spellings:

Fortunately, context will be able to help you 99% of the time since people will assume you go on a walk with your dog and not your crab.

I briefly went into detail about the double consonants above. Here’s a little more on pronouncing them correctly.

As mentioned, it’s best to think of them as just strong pronunciations. But it’s also important to write them together as one letter.

So you double them up and write ㄲ, ㄸ, ㅃ, ㅆ, and ㅉ to sound like [-gg], [-tt], [-pp], [-ss], and [-jj] respectively. They sound strong and a little higher-pitched. So keep your ear tuned closely while having conversations:

Likewise, let’s go into a little more detail about those mixed vowels. Similar to the double consonants, you combine the vowels together into one letter.

Do the same with all the other vowels on the list and you’ll be pronouncing them like a native speaker in no time.

Practice makes perfect when it comes to Korean pronunciation. But have fun with it. Aside from language learning apps, you can watch videos, listen to music, or binge-watch your favorite K-drama.

The real secret is recording your voice while practicing. This is the best way to hear if you’re getting close to the right pronunciation or not. As uncomfortable as this might be, do this from time to time. This will help you hear where you’re nailing it and where you might need a little extra effort.

And don’t forget to keep reading and writing Hangul. The more you do so, the more everything will start coming together, and the closer you’ll be to getting that native-level Korean pronunciation all language learners want. 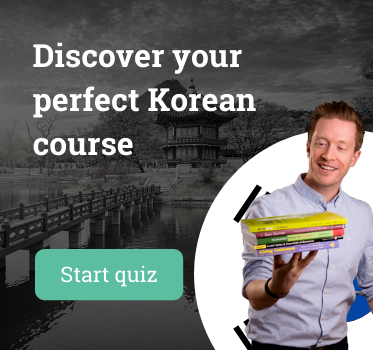