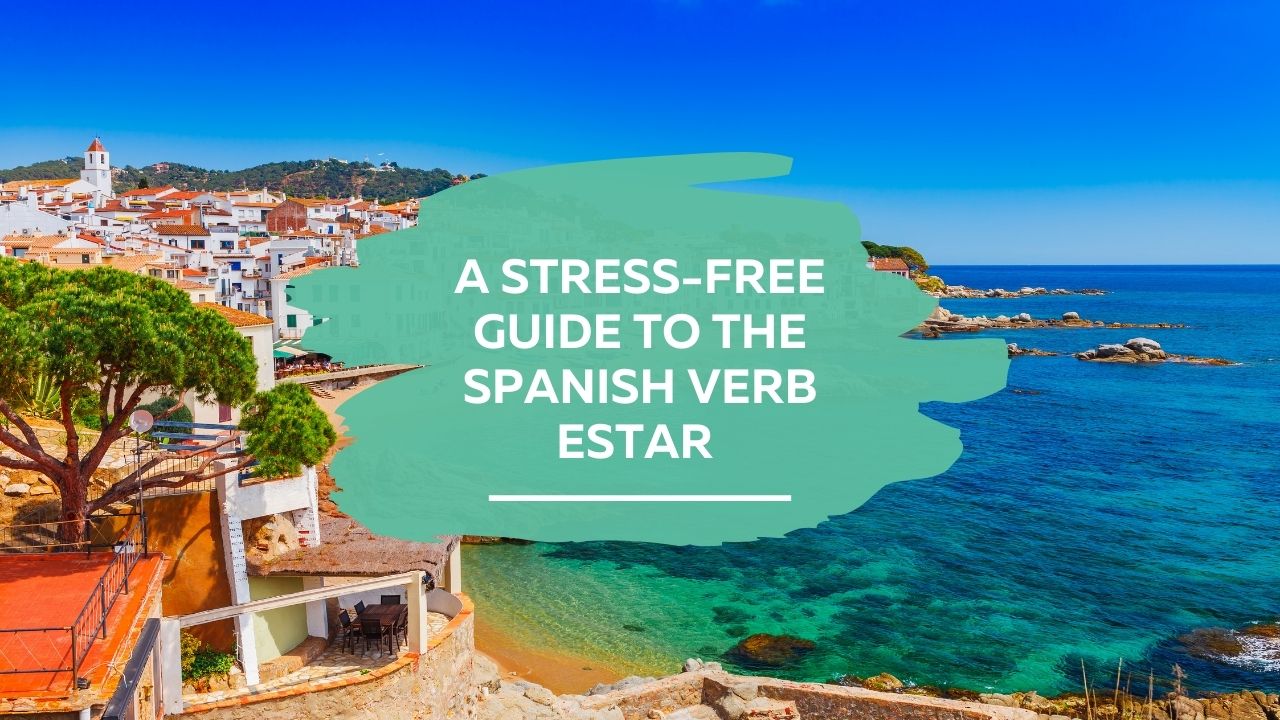 A Stress-Free Guide To The Spanish Verb Estar

When you learn Spanish, you quickly find out that the estar verb is one of the most common verbs. It’s usually translated into English as the verb “to be”. But Spanish is one of a handful of languages that has more than one way of expressing the concept of “to be.”

In this post, I’ll be focusing on the estar verb, including how to conjugate it, how to use it as an auxiliary verb, and when not to use it.

Because estar is an irregular verb, you’ll need to memorize it early on in your study of the Spanish language. The more comfortable you get using the estar verb, the more easily you’ll be able to get your point across and understand Spanish phases.

I’ll start off by comparing estar with its close cousin, the verb ser, which can also be translated as “to be,” but has a slightly different meaning.

This difference between ser and estar can be one of the hardest things about Spanish for English speakers to wrap their heads around, because we simply don’t make this distinction in the English language.

You can think of the difference between the two verbs like this:

I’ve put temporary and permanent in brackets, because the distinction isn’t always so clear-cut, and some uses of the verb don’t neatly fit this pattern. Another way to think of it is that ser describes what something is and estar describes how something is.

For example, statements of identity, such as a person’s occupation, nationality, physical characteristics, and personality, always take the verb ser.

On the other hand, statements of location, condition, emotion, and other temporary or incidental qualities, always take the verb estar.

It can take some time and exposure to the language to get clear on the right verb to use in a sentence, but it’s important not to use the two verbs interchangeably.

Can you figure out the difference between these two statements?

The first uses the verb estar and describes a temporary status or condition: I am bored. The second uses the verb ser and refers to a permanent state: I am boring.

How To Conjugate Estar

Now that you know the meaning of estar, it’s time to learn how to conjugate it. This will allow you to use it to describe past, present, and future conditions.

Remember, estar is irregular, so it doesn’t follow the standard pattern for verbs that end in -ar. Here’s how it’s conjugated in four of the most commonly-used tenses:

The present tense of estar is used to describe things that are happening now.

The preterit, or simple past tense, describes things that happened at a specific point in time. For example:

The imperfect tense describes things that happened at some point in the past, without a specific beginning or end point. The closest equivalent in English is “used to be,” but it’s also found in phrases that describe “while” something was happening. For example:

You can also use estar to describe things that will occur in the future. For example, the question ¿Estarás aquí mañana? means “Will you be here tomorrow?”

Keep in mind that this is distinct from the phrase “Are you going to be here tomorrow?,” which uses the verb ir in addition to estar: “¿Vas a estar aquí mañana?”

Now that you know how to conjugate estar in several tenses, you’ll be able to recognize it in more sentences. You can also keep an eye out for certain phrases or situations that call for the estar verb.

Here are a few of the most common ways to use it:

Temporary states and conditions (including emotions) call for estar. Being happy or sad, sick or healthy, married or unmarried, all use the verb estar.

*There are a couple of notable exceptions that we’ll get to below.

Describing the location of a person, place, or thing nearly always calls for estar. This is especially important to keep in mind when asking for directions. For example, the right way to ask “Where is the toilet?” is ¿Dónde está el baño?

While people will still understand you if you ask ¿Dónde es el baño? (using ser instead of estar), it’s a surefire way to stick out as a non-native speaker.

Using Estar As An Auxiliary Verb

Estar can also be used as an auxiliary verb in order to form the progressive tense. This means you use it along with the present participle of another verb.

You can also use the past tense of the verb estar to describe an action that happened in the past: “I was eating” is Estaba comiendo.

This allows you to create a virtually unlimited amount of verb combinations once you’ve memorized the various tenses of estar.

When NOT To Use Estar

Despite its wide range of uses in Spanish, there are several situations in which the estar verb is never used – even in phrases where we’d use the verb “to be” in English.

This is why it’s so important to understand estar and not attempt a word-for-word translation.

Let’s take a look at a few of them:

If you've learned other Romance languages, you'll be familiar with this key difference between English and Spanish.

While in English, we’d say “I am 50 years old,” in most Romance languages, we use the verb tener (to have) instead.

In Spanish, this becomes:

You can use Estar to describe the temperature of some things, such as food:

The ambient temperature calls for the verb hacer:

To describe the temperature of a person, we use tener, just like we do with age:

We’ve already explained that estar is the go-to word for emotions, but there are a few exceptions.

Some feelings, like cold, thirst, fear, and embarrassment use tener:

This makes sense if we think of it as “He has hunger and thirst” instead of “He is hungry and thirsty,” which is how we’d express it English.

Likewise, the expression “You’re right” becomes Tienes razón in Spanish, which translates literally to “You have reason.”

There are several other phrases that use “to be” in English that don’t use ser or estar in Spanish because they’re expressed in a different order.

A similar example is:

In other words, the thing that’s being worried about is the subject of the sentence, so there’s no need to use the verb “to be” at all.

But if we’re referring to a specific event, we use ser instead of estar:

Additionally, we always use ser and never estar to talk about the date and time, even if it’s in reference to a temporary state or occurrence:

How To Get Better At Using Estar

These are just a few examples of how to use estar in a sentence. Because Spanish is such a complex language, I can’t possibly cover them all.

The best way to improve your understanding of estar is to expose yourself to it through reading Spanish, listening to Spanish, and chatting to Spanish speakers. Keep an eye out for phrases that use estar and work them into your vocabulary.

The more you learn to distinguish between the two different forms of the verb “to be” in Spanish, the better you’ll be able to get your point across to native speakers!