As you learn Spanish, you've probably noticed that every single noun, pronoun and adjective is either based on, or changes with, gender. And that makes the language rather inflexible when it comes to a fast-developing society around it!

In fact, I got a question about this from one of my Spanish Uncovered students who wanted to know more about inclusive Spanish.

It's a vital subject. But I'll also admit that it's outside my area of expertise, so I needed to do some brushing up myself!

So, I decided to ask my friend, Sofía, a native Spanish-speaking writer and journalist to help me out. And she did just that!

Thanks to Sofía, by the end of this post, you'll know everything you need to know as a Spanish learner about inclusive language, including why it was created and how to use it.

If you prefer watching videos to reading, then check out the video version of this post below. Otherwise, keep reading.

Why Was Inclusive Spanish Created?

All languages change over time. And in recent years, some languages have started to adapt to recent changes in society.

Just as in English the “they” pronoun is now used to talk about non-binary people or people whose gender we don’t know, in Spanish some people are starting to use “Inclusive Language” or “Lenguaje Inclusivo”.

But in English you have it slightly easier, since gender is not so present as in Spanish.

In regular old-fashioned Spanish, just as in English, we express gender in pronouns. But there are a few more distinctions than “he” and “she”.

Then, unlike in English, most nouns have gender, not only those that refer to people, such as el enfermero and la enfermera (nurse) or el maestro and la maestra (teacher), but even inanimate objects!

Don’t worry, we don’t use inclusive language with these. Only when it comes to people!

But gender is not only expressed in pronouns and nouns. In Spanish, there's also gender concordance with articles and adjectives.

The Generic Masculine In Spanish

And finally, in traditional Spanish there is something called “generic masculine”. So, what does this refer to?

It only takes one man in a group of a hundred women to make a group masculine!

For some people, this is unfair to women. And not to mention non-binary people, who are not even on the map!

Inclusive Spanish is a way to avoid all these issues.

How Do Spanish Speakers Use Inclusive Language?

As I said before, inclusive language can be used when:

It's the same with adjectives and nouns. When gender is marked with an “o” or an “a”, you change it for an “e”. As I said before, this is only when it comes to people.

For example, if you say Mi hije tiene cinco años, (my child/kid is 5 years old) the word años (years) remains unchanged, because even if it's a masculine word, it doesn’t really have a gender in the sense that people do.

It's the same with objects…

Finally, there are some adjectives and nouns that don’t mark the gender with an “a” or an “o”. These remain the same when using inclusive language.

Now, let’s mention some things to have in mind when using written inclusive Spanish.

Another thing to have in mind is that, while it’s still pronounced like an e, many people write inclusive words with an X or an @ symbol.

If you have to read this outloud, just use an e.

Finally, there are a few gendered words that cannot simply be changed with an e, like “mother” and “father”.

But there are already some inclusive options being used, like xadre or mapadre. 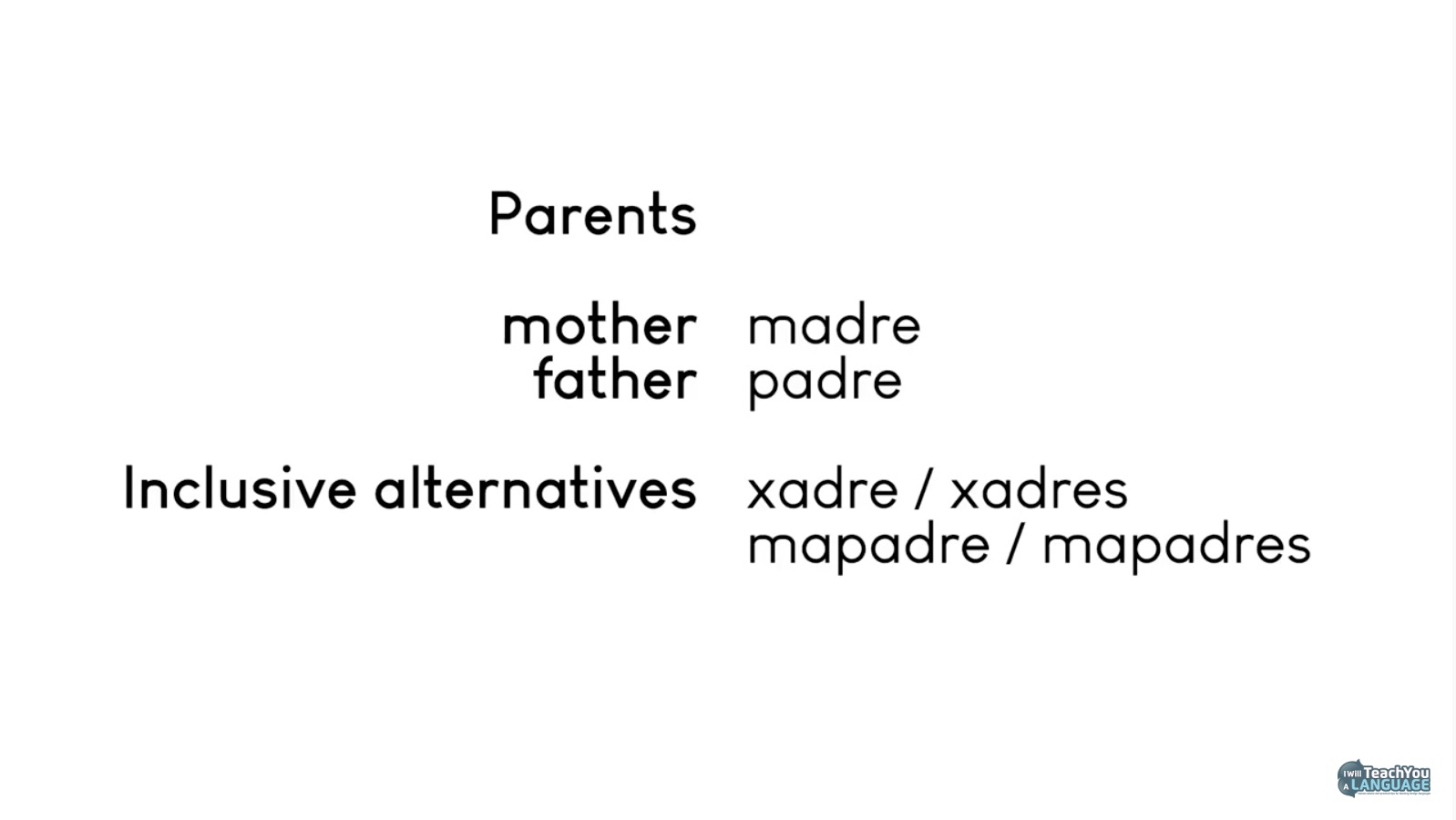 The Future Of Inclusive Spanish

Of course, there are many conservative people who oppose the use of inclusive language. And many people who are indifferent to it.

There are some people and institutions that acknowledge that Spanish is sexist but they recommend avoiding the letter “e”.

Instead, they propose avoiding gender marks when possible and, when necessary, mentioning both men and women in mixed groups, like this:

But this can be problematic, because it ignores non-binary people and it also implies assuming people’s gender when we don’t always know it.

Since the introduction of inclusive Spanish is not happening as slowly or organically as normal changes in languages usually happen, some people are also arguing that it will not prevail, even if its intentions are good.

But I believe this is not necessarily true, since gender perception is changing rapidly. And it might become quickly unacceptable to use the language as we use it today.

In any case, you can choose if you want to use it or not. No one will judge you if you don’t, especially if it’s not your native language!