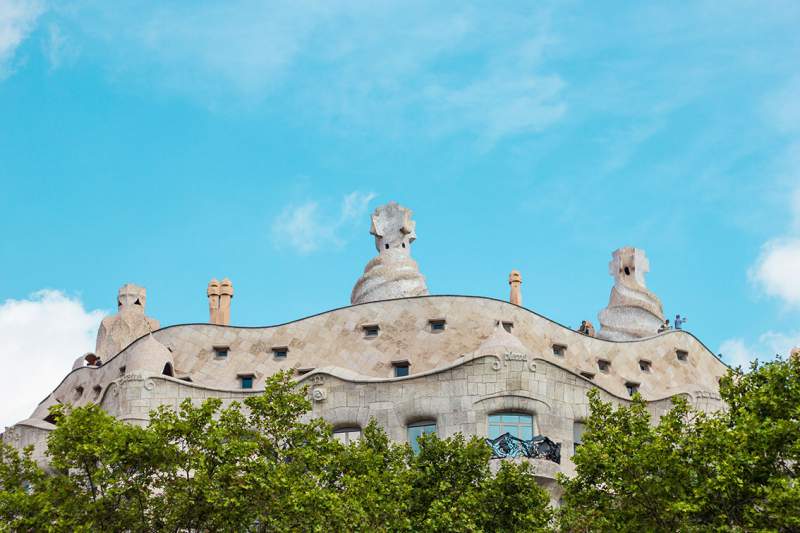 Learn A Language Abroad: How I Learnt Spanish in Barcelona

This is a guest post by Jessica Elliot from Sky Blue English. Jessica moved to Barcelona in order to improve her Spanish, and here is her story!

I’ve been told that my eyes light up when I talk about Barcelona.

I lived there for two incredible, life-changing years, and I’m going to tell you about how I went from knowing a few words of Spanish to fluency, the language learning methods that worked for me, and the importance of having the right mindset.

It was spring, I was living in London, and I had itchy feet.

I knew that I wanted to spend some time abroad, but I couldn’t quite decide where.

I was considering going to the States and working in a summer camp. And then a good friend of mine, Josep, asked me if I fancied going to Barcelona with him for a weekend.

He’s from there and said that he’d show me around.

I jumped at the chance, and I completely fell in love with the city – the bright blue skies, strong sunlight, bright colours, the warmth of the people, delicious cannelone, the big family meals.

There was even a party that we went to for Sant Jordi where everyone gave each other books!

That was it – I suddenly knew Barcelona was where I wanted to be.

I was working in a university library at the time and I managed to negotiate three months of unpaid leave so I’d have a job to come back to.

I decided to enrol on a TEFL course and I found a room to rent through a friend of a friend, and that was it – I was off!

I arrived in July and the heat was incredible – grey, cold London seemed a whole world away.

The TEFL course was really full-on, with classes all day, and then I’d go out with the others from the course at night.

I somehow thought that I would pick Spanish up quite quickly. And I was initially pleased that two of my flatmates didn’t speak any English.

I enrolled in a Spanish course but I soon realised that it was going to take quite a while to pick up the lingo.

I’m usually quite a chatty person. So I found it really hard not being able to communicate that much with my flatmates.

I felt that I just came across as quite rude as I didn’t know how to say really basic things.

I remember trying to say things, but just saw completely blank faces, so I didn’t spend that much time at home.

It felt uncomfortable and quite bad being there and creating an awkward atmosphere.

It was also strange being in a group when everyone was speaking Spanish and I just didn’t understand anything.

Sometimes I felt like a wave was washing over me and I was lost in a sea of language.

I used to try and study grammar books in the evening (classic grammar villain move), but it felt quite overwhelming and I didn’t seem to remember any of it when I tried to speak.

I’d been told that it’s good to read novels, even if you don’t understand everything. However, the novels I chose were way too difficult, so I was reading for hours without grasping much at all. (This is where the StoryLearning® method works its magic – you read books at your level to pick up your target language naturally.)

Despite the difficulties, I was actually having the time of my life.

It felt as if all my senses were alert and I had a new pair of eyes.

Everything I did was exciting and interesting.

I was constantly seeing new sides of the city and I couldn’t wait to explore more places and have new adventures – to uncover another layer.

I was absolutely intent on persevering with my Spanish.

I found that I really enjoyed teaching English. And I realised that I could use some of the same techniques to teach myself Spanish.

I realised that the students I was teaching were benefiting most from the oral exercises we were doing to practise specific grammatical structures.

I would teach them the rules. And then we would practise using what they had learnt.

Grammar, known for being dull and boring, comes alive when you are talking about interesting things.

For example, to practise the past simple, I might ask them to talk about a holiday that they enjoyed or their first friend/ memory/ day at school/ alcoholic drink etc.

To teach them comparatives, I would ask them to compare two cities or countries that they knew well or maybe two siblings or friends.

As they were talking, laughing and expressing themselves I would just write down corrections and then we would go through them at the end of the class.

Another thing that I had learnt from teaching was that it’s best to learn a language when it’s broken up into manageable chunks, and you have a plan.

At the beginning, I felt completely overwhelmed by the idea of learning Spanish, but it seemed much more possible when I had a method.

So I knew how I could learn Spanish but I didn’t have anyone to practise with….

One day I heard about something called an intercambio.

I’d never heard about it before but it seemed like a great idea so I teamed up with a lady that I met at the gym.

I can’t tell you how much this helped me!

I would decide before the sessions what I wanted to focus on and read up on the grammar.

Then, I would use my ‘hour’ to really focus on practising the constructions.

There was a particular session I remember when I was practising how to use the words “yet” and “already.”

I was so confused about how to use todavia and ya before we met up. But afterwards, I felt really confident.

I asked her to imagine that we lived in the same house and she was a bossy flatmate asking if I had done certain things.

It was a funny role play so we were giggling quite a lot.

I came away from our session really buzzing, and felt that I had cracked the code.

It felt so good learning how to say useful things that I knew I would use (although hopefully not in exactly the same situation)!

I bought the worksheets that are available on Notes in Spanish and found them very helpful.

The creators of this Spanish podcast are a couple called Ben and Marina. And I liked the fact that they discuss interesting topics and have useful exercises.

I could really relate to Ben as he’d also come from England and was really eager to express himself and learn new words.

One of the main reasons that I achieved fluency was because I was so determined.

I told myself that I just had to learn and I didn’t give myself another option.

I was intent on learning and always believed that I could so although I sometimes felt frustrated, I never felt defeated.

So I consciously put myself in situations in which I would speak Spanish.

Although I had English speaking friends, I made a real effort to socialise with Spanish speakers as well.

I also got a job at the shop in the Picasso museum, and it was great learning while I was working.

I got a bit braver at communicating with my flatmates, and when I wanted to say something, I’d go and look up the words in the dictionary to help my speaking.

I love the fact that words and phrases I learnt have memories of that time attached to them.

The more I practised, the braver I got, and at last, people were understanding me!

It felt as if a new Spanish ‘me’ was emerging and I loved it.

The initial shyness was melting away and I felt confident.

I made some funny mistakes at that time, as I was talking more.

I once asked a lady in a shop for, diez sobrinos morenos, (ten tanned nephews) instead of, diez sobres marrones, (ten brown envelopes).

The lady laughed so much, and when she explained my mistake, I started laughing.

We were both nearly crying with laughter by the time I left the shop.

I remember a wonderful evening, it was the despedida (farewell party) of a French friend of mine.

I was chatting away and the Spanish was just flowing out of me.

I’m sure the chupitos (shots) helped a little. But I suddenly felt like I had a grasp of the language.

Of course, there was still so much to learn. But I’d gotten to a point where I could generally say what I wanted to say and understand what people were saying to me.

So if any of you are reading this and wondering if you should go and learn a language abroad, I’d say GO FOR IT!

It was definitely the best thing that I ever did and I would do it all over again!

Jessica Elliot is an English teacher who loves learning languages. She grew up in London and specialises in one-to-one tailor-made classes in person and through Skype with Sky Blue English. She teaches in the heart of London (just off Trafalgar Square) and has been teaching English as a foreign language for more than nine years. You can connect with her through Facebook and Twitter.

Have you ever moved abroad in order to learn or improve a language? Tell us your story in the comments!