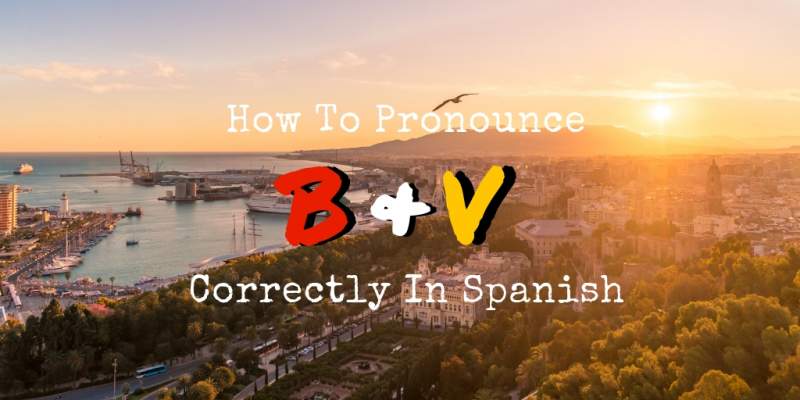 When learning Spanish pronunciation can be a struggle to get your tongue around right?

You're probably focusing your time and energy on learning to roll your “r” sound or getting your “ll” just right.

And while that's not a bad way to spend your time, you might be overlooking a subtle yet crucial pronunciation distinction.

One that'll help you

That's why today's post is all about Spanish B/V pronunciation. You'll learn about the differences and similarities between the letters B and V in Spanish, so can finally stop feeling confused about how they sound!

I've made a video for our Fluent Spanish Academy YouTube channel all about B/V pronunciation which you can watch below. Alternatively, scroll down to read the full article.

By the time you finish reading, you'll know exactly how to pronounce these letters correctly in Spanish and sound more natural when you speak.

Let's start with a piece of Spanish language trivia:

If you said “true” you are correct…

B and V do have the same sound in Spanish.

But what you might not realise is that there are actually two different sounds Spanish speakers make when they pronounce a B or V depending on the word and context.

The 2 Different B/V Sounds In Spanish 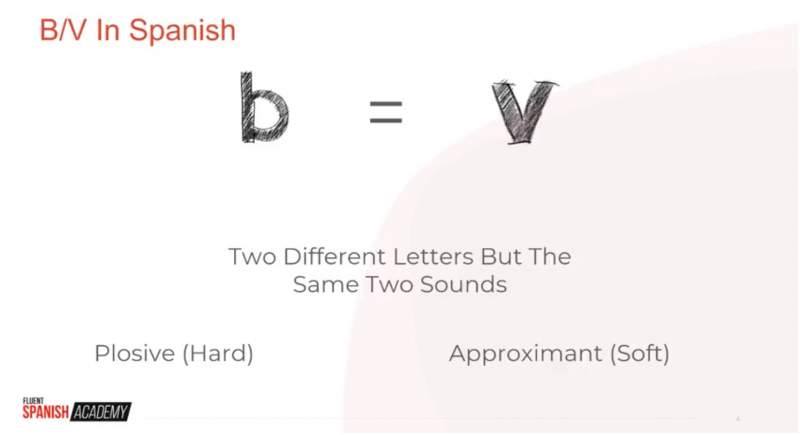 In phonetics, the two different sounds are known as the “plosive B/V sound” and the “approximant B/V sound.”

Don't worry about the linguistic terminology too much.

You can simply think of them as the hard and soft B/V sounds respectively.

The difference is less in the letter being pronounced and more in how you use your mouth…specifically, your lips.

The Plosive (or “Hard”) Spanish B/V

When B or V appears at the beginning of a word in Spanish, it makes a “hard” (plosive) sound.

This sound is very similar to the sound B makes in English, although it is just a little gentler. It's made by pressing your lips together, then opening them and releasing the air.

You also use the plosive sound when the B or V is next to another consonant, like in the following words:

When you pronounce any of these words, you'll make the same sound as you would pronouncing B in English, but without blurting it out quite so strongly.

The Approximant (of “Soft”) Spanish B/V

Again, this sound is very similar to the sound B makes in English, but with even less force. In fact, your lips should barely touch (or not even touch at all) right before moving on to the next sound in the word.

The softer pronunciation is also sometimes called the “lazy B/V” because it takes less effort to make than a hard B/V.

Some words that use the “soft” B/V sound are

Now that you know the basics of pronouncing B and V in Spanish, it's time to build your fluency with these fun practice ideas.

Sound Like A Native: 4 Ways To Practice Pronouncing B/V In Spanish

If you are having trouble pronouncing B and V like a native Spanish speaker, here are four ways you can get more practice and perfect the sounds:

Pay close attention to the sounds you hear when speaking and listening to native Spanish speakers. Once you're paying attention, you'll easily pick up on the gentle way Spanish speakers pronounce B and V.

If you aren't already using audio in your language learning, I highly recommend it. Look for natural audio and captivating stories to supplement your other learning resources.

It may be tempting to listen to audio at a slower speed than normal while you're still learning the language. But it's a major mistake to slow things down.

How often have you tried to listen to something in Spanish and just can't keep up with the pace of the speech? That's because you haven't learned to follow along at full speed.

Instead of slowing down what you listen to, you need more practice listening to natural speech the way it is spoken in real- life situations.

As you do so, listen carefully for the B and V sounds and notice how they're pronounced in different words.

Listen To Stories In Spanish

In addition to listening to holding lots of conversations, listening to short stories in Spanish can be a great way to improve your listening skills and get to grips with the Spanish B/V sounds.

The video below features a short story taken from the Fluent Spanish Academy. Why not listen to the story and tune your ear to the Spanish B/V sounds as you do so?

2. Watch A Video Tutorial About The Spanish B/V Pronunciation

There's nothing quite like hearing a sound when you're trying to make it yourself. That's why my first tip was to start by listening!

But, in addition to listening to as much Spanish audio and conversation as you can, try using a specific video tutorials, such as the one I included at the top of this post, to guide you through the hard and soft B/V sounds.

The last few minutes of that video are dedicated specifically to guided practice where you can say the B/V sounds along with me. If you're struggling to master the Spanish B/V pronunciation, it's worth bookmarking the video so you can come back and repeat this practice exercise regularly. In time, the sounds will become much more natural to you.

You'll also find more specific information in the video about how and when to use the plosive (hard) and approximant (soft) sounds like a native Spanish speaker in no time.

Click here to go back and watch the video now.

3. Pay Attention To Your Lips When You Speak Spanish

When you make the hard B/V sound, your lips will close before you pronounce the letter, as you would in English. All you need to do is work on softening the pronunciation slightly.

With the soft B/V sound, on the other hand, your lips don't close all the way. If they do, they should barely touch right at the end of the letter. Try to pronounce the B/V softly, by just barely touching your lips together when either letter appears between two vowels in the middle of a word.

4. Use Tongue Twisters To Increase Your Confidence

Believe it or not, Spanish tongue twisters (trabalenguas) are a fun and challenging way to perfect your pronunciation and gain confidence with B and V.

Your pronunciation and fluency will get better as you get practice repeating the B and V sounds regularly with fast, repetitive phrases.

Here are a few traditional trabalenguas that include plenty of both the hard and soft B/V sounds:

Start slowly with each trabalenguas, focusing on pronouncing each word individually. As you feel more control over the silly phrases, you can speak a little faster each time through. With a little practice, you'll find the two different B and V sounds soon start to flow quite naturally!

Why Mastering B vs V Matters For Your Spanish Fluency

There are a number of reasons why mastering the subtleties of B and V in Spanish will be worth the effort: 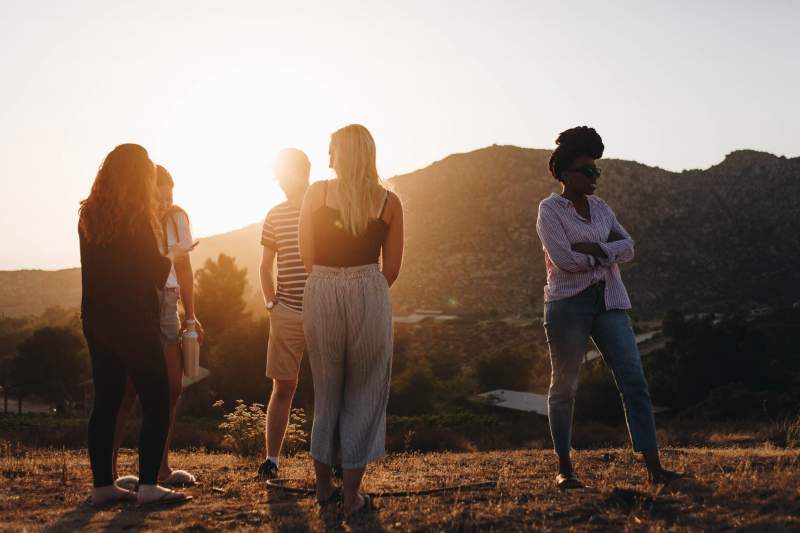 Mis-pronouncing the Spanish B/V sound, especially in the middle of words, is a surefire way to get yourself identified as an English speaker.

Although having an accent is nothing to be ashamed of while you are learning a new language, it's always nice to sound as much like a native speaker as possible.

It helps other people understand you better and is immensely satisfying to see their surprise when they find out where you're actually from.

The more you hear and use B and V correctly in Spanish, the more normal these sounds will seem. You'll be confused less often about what is being said once you're familiar with the way B and V are actually pronounced in Spanish.

As you gain confidence with the B/V sound, not only will it be easier for others to understand you, you'll also find it easier to recognise what native speakers say to you as well.

3. You'll Be Able To Decipher Common Spelling Errors In Text Messages And Online

Text messages and posts online in are riddled with abbreviations and shortcuts—not to mention typos and misspellings—in every language. Spanish is no exception. Look at the following examples of common mistakes with B/V online:

When you hear someone speak Spanish the words below effectively sound the same:

Any word with a B or V is a likely candidate for misspelling, but estar and andar are especially tricky for one reason: each verb has common conjugations that use both B and V.

The fact that some conjugations use B, while others use V leads to some common spelling mistakes, even for native speakers.

In addition to the examples above, you may encounter other mistakes with just about any B/V word. Some of the misspellings I see often are:

In the case of a word like vaya, the misspelling is twice as confusing because baya is an actual word in Spanish!

Context should tell you if someone means “berry” (baya) or the first person subjunctive of “to go” (vaya). But mixing up the two words can still be confusing if you are already struggling to keep up in a conversation.

Your Next Steps For Mastering Spanish B/V Pronunciation

So now you know that Spanish B/V are the same… but subtly different.

Remember, it's not which letter that's used that matters—the letters B and V are effectively the same in Spanish.

It's the position of the letter in the word that determines whether you should use the plosive (“hard”) or approximant (“soft”) sound.

The differences are subtle, but you can learn to recognise and pronounce both sounds B and V make in Spanish with practice and by paying close attention when listening.

So here's what to do next…

Keep at it and before you know it, you'll be pronouncing the Spanish B/V sounds like a native!