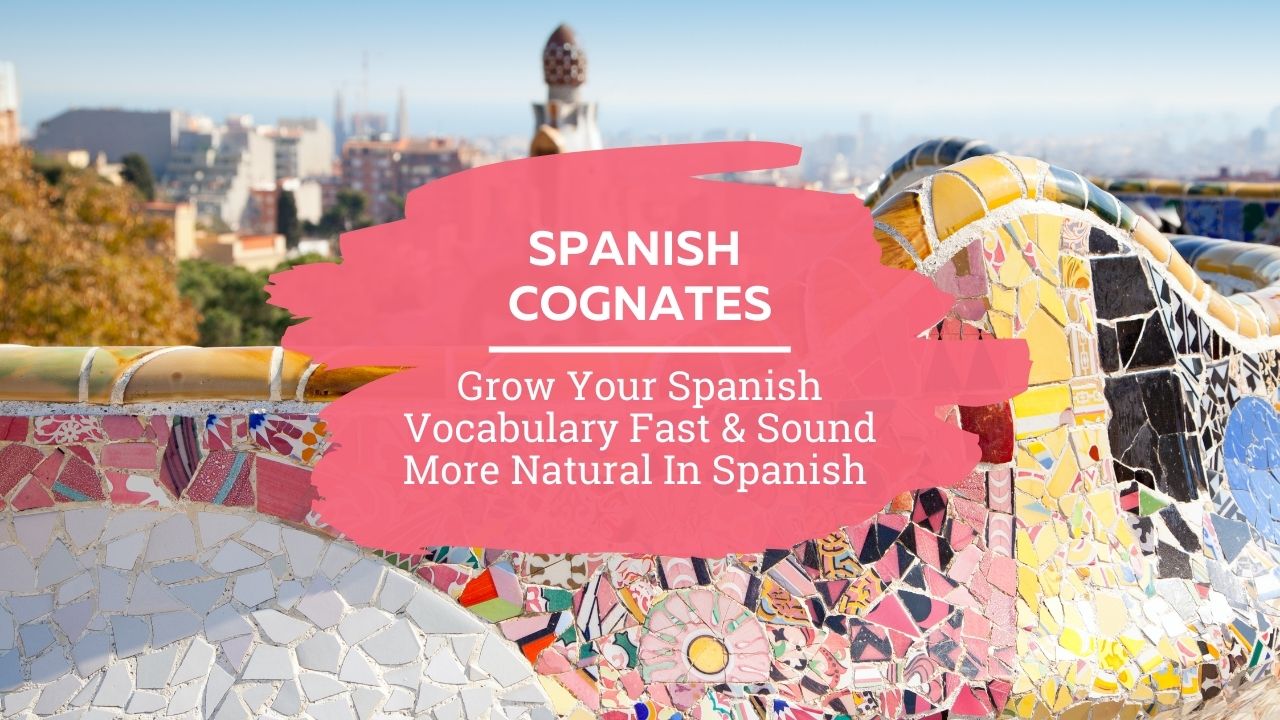 How To Grow Your Spanish Vocabulary Fast With Spanish Cognates

Are you learning Spanish?

You can get your point across…

But your Spanish still sounds a bit too English?

In this article, you'll learn about Spanish cognates and start sounding more Spanish right away!

Because English and Spanish come from nearby language families, you’ll find it easier to learn Spanish than a language that has no shared vocabulary at all.

So learning Spanish cognates will give your vocab an instant boost. But you need to be wary of Spanish false cognates, so-called false friends.

But don't worry, by the end of this post, you'll be able to sort the true friends from the false ones and avoid embarrassing translation errors that English speakers usually make!

English is a Germanic language that borrows a lot of its vocabulary from French; both French and Spanish are Romance languages that are derived from Latin.

This means that if a Spanish word is similar to an English word, that’s no accident: they very likely come from the same root and have a similar meaning.

Words that have the same etymological origin are called cognates, and usually have a similar spelling and pronunciation. One example is the word “night,” which appears in dozens of Germanic and Romance languages in a slightly different form:

Some words, however, are “false friends” that have the same origin but not the same meaning. Somewhere along the way, their meanings diverged, and now they sound alike but mean totally different things.

For example, if you use the Spanish word embarazada, thinking it means that you’re “embarrassed”, you might be surprised to learn that it actually means “pregnant”!

It’s important to identify these false cognates to avoid confusion, but don’t worry about them too much – most words that look similar are similar.

First, let’s look at a few words that don’t change much between Spanish and English. These words typically keep the same spelling, but are pronounced differently. Some have accent marks that show you where to put the emphasis in Spanish.

Words that end in –al or -ar are often the same in both languages. Many other words can be turned into Spanish verbs by adding -ar or -ir:

Remember, Spanish is a phonetic language that pronounces all letters and syllables in the written word, including those that would be silent in English. For example, the word chocolate is only three syllables in English (or even two, if you pronounce it “chôk′lĭt”), but four in Spanish: (choh-koh-lah-teh).

The best thing about Spanish cognates is that they aren’t random. Many of them follow consistent patterns, so if you know one, you can apply the same rule to other words that use the same pattern.

Often, you just have to swap out the ending of an English word to form its Spanish equivalent.

Here are a few of the most common patterns:

English words are more likely than Spanish words to end in a consonant, so some of the most common Spanish cognates simply use an –o ending:

Adjectives that end in -ous in English change to -oso in Spanish:

Words that end in -ry (usually nouns) end in –rio in Spanish:

Words that end in -ic often end in –ico in Spanish:

Words that end in –ive in English typically take an –ivo ending in Spanish:

Words that end in -ct or –id simply need an -o at the end:

Because so many Spanish words end in an -o, it can be tempting to add an -o to any English word to make it “sound” Spanish. Not only is this a lazy shortcut, it doesn’t always work. As we’ll see, other cognate endings are a little more complicated.

Many Spanish words end in -a or -e. This includes words that end in -ble and -ple, which are often spelled the same in both English and Spanish:

Words that end in -ance usually change to -ancia:

Words that end in -ant or –ent usually end in –ante or –ente:

Words that end in -ist usually refer to people and take an -a ending in Spanish:

These rules can vary, so learning cognates shouldn’t take the place of studying Spanish vocabulary. However, it can help you identify related words more easily.

Other cognate endings are a little more complex, but still follow a standard pattern once you get to know them. These groups usually share a theme in addition to an ending.

In English, many words that end in –tion have a Latin root, so there’s very likely to be a Spanish cognate. The Spanish word will usually end in ción:

Words that end in –ly in English are usually adverbs. These end in -mente in Spanish, so knowing this ending can help you identify adverbs more easily:

Words that end in –ty are often abstract concepts in English. This ending becomes the common Spanish ending –dad:

Words that end in –ism include political and philosophical concepts. These words have an additional -o on the end in Spanish:

These groupings are just helpful ways to think about cognates and find some common patterns, but they aren’t hard and fast rules. Always look a word up if you aren’t sure about its meaning, because it may not be as straightforward as it sounds.

Other cognates don’t share a common spelling, such as “night” and noche, or “hour” and hora, but still have a similar meaning and etymological origin.

Next, we’ll look at some cognates that can trip you up if you aren’t careful. Take note of them now, so you won’t be surprised when you encounter them in Spanish!

There are many aspects of Spanish that make it easy for English speakers.

Often, an English to Spanish translation can be perfectly literal, and you can produce a native sounding sentence without changing the English word order at all.

For example, if you misplace your phone, you might ask: “Where is my mobile?”

If you tried to say this word-for-word in Spanish, you'd get: “Dónde está mi móvil?”

And you'd be right – this is correct Spanish.

This is an example of when a direct English to Spanish translation works well.

But, as you're probably aware, this isn't always the case … especially when it comes to vocabulary.

Suddenly, you realise your mobile is in your pocket after all!

Feeling foolish, you say: “Actually, it's in my pocket!”

You say it in Spanish: “Actualmente, está en mi bolsillo!”

If you didn't sense any red flags at this point … you should have!

These are the kind of mistakes that immediately give you away as an English speaker.

In order to start sounding more native-like, you need to learn to identify when you're using a literal English to Spanish translation, and figure out how native speakers express the same thing.

How can you do this? And what's the problem with the sentence above?

False cognates in Spanish (otherwise known as “false friends”) are words that are also found in English, but that are used differently, or carry a different meaning altogether.

Let's look at a very commonly misused false cognate in Spanish that we saw above:

But in Spanish, it means something different: at the moment, nowadays

This is a classic example of a false cognate in Spanish.

Here's how you might hear an English speaker misuse this word in Spanish:

The correct translation of “actually” is por cierto.

So, Step 1 in making your language sound more natural is to identify the places you're using false cognates in Spanish.

Once you're aware of this, you can grab a Spanish dictionary and figure out the correct usage of the word.

In the case of actualmente…

Now, you might be thinking this is going to be horribly confusing!

But really, it's not.

When I first learnt Spanish, I found that simply reading lists of false cognates in Spanish, becoming aware I had to look out for them, and then paying attention…was enough.

Some More Examples Of False Friends In Spanish

Here are a few other false friends in English and Spanish:

Atender looks like a cognate of the verb “attend,” but it doesn’t mean to attend a class or a meeting. It means to attend to someone or something, or to take care of them. In Spanish, you’d use the word asistir to mean “attend.”

Asistir as you've probably now guessed, doesn't mean “to assist”. For that, you’d use the Spanish word ayudar, which means “to help”! You can see how the slight change in meaning could lead to confusion if you use the wrong word in conversation.

último looks like it might mean “ultimate,” but it actually means “last” or “latest” in Spanish. This makes sense when you think about it in terms of the word’s Latin root: after all, penultimate means “second-to-last.”

Realizar means to achieve or carry out something; to say that you “noticed” something, you’d use the phrase darse cuenta, which almost literally means “to give an account to oneself.” (i.e., “Me doy cuenta” means “I realize it.”)

Advertencia means a “warning” in Spanish, not an advertisement; to refer to an ad in a newspaper, you’d use the word publicidad.

Recordar means “to remember” or “to recall.” To say that you made a recording, you’d use the word grabar, which means “to record.”

Mil refers to a thousand in Spanish, not a million; that would be millón, while billion is mil millones or un millardo. That can get confusing real fast!

How To Learn Spanish Cognates

Don’t be scared off by these false friends; the vast majority of Spanish cognates have similar meanings in English. When you see a familiar-looking word in Spanish, see if you can guess its meaning before looking it up.

You’ll be able to read and comprehend Spanish much more quickly if you can identify the most common cognate patterns and rely on their similarities with English.

With this approach, you won’t need to learn every Spanish word individually; you might even be surprised at how many Spanish words are already in your vocabulary!

The best way to learn Spanish cognates is with the StoryLearning® method. Look out for the cognates as you read Spanish books, listen to Spanish podcasts or immerse yourself in short stories in Spanish.

You'll grow your Spanish vocab in no time and you'll soon figure out which cognates are false friends and which ones are true!