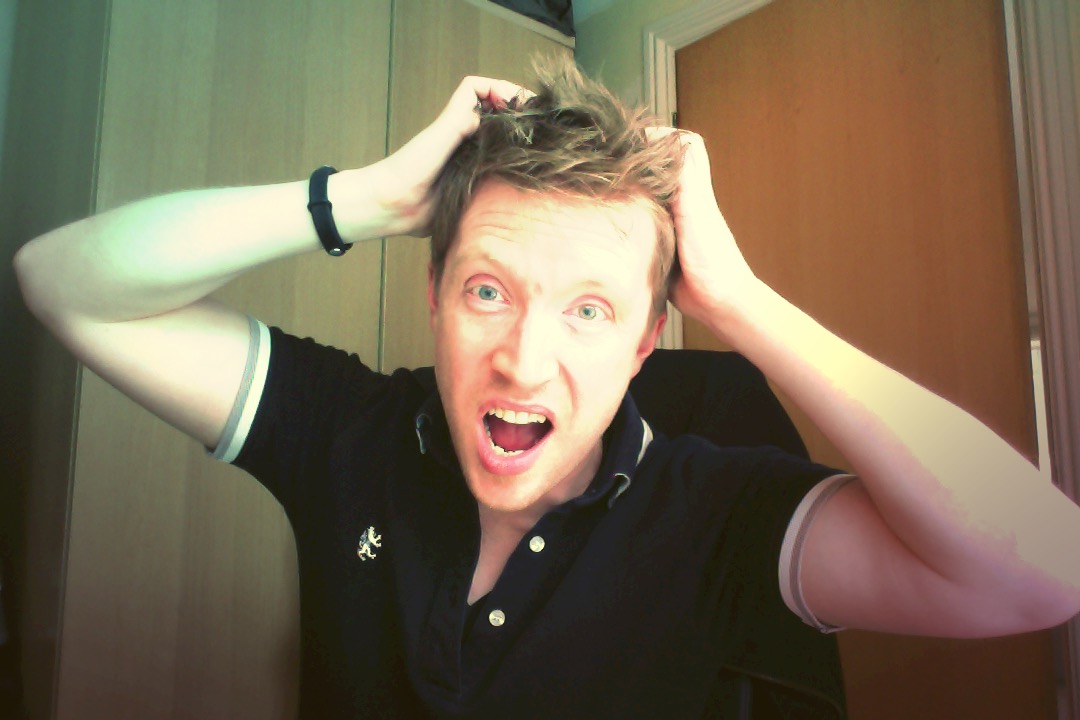 16 Language Learning Problems I Struggle With Every Day

As a language blogger and podcaster, people often assume I have all the answers.

But nothing could be further from the truth!

I struggle with a whole host of language learning problems on a daily basis that I wish I could get better at.

Here are some of them.

One thing that has helped me over the years in my language learning struggles is learning through stories, not rules – that's why I created the StoryLearning® method. And it can help you too – find out more and get your free 7-day trial of the course of your choice.

1. Preparing For My Skype Conversations In Advance

I learn boat-loads from regular Skype chats with my tutors, and if I could take one language learning tool to a desert island, it would be Skype (plus a reliable internet connection, of course).

So why don't I make the conversations even more effective by preparing some topics, words and phrases in advance?

The times I've done this, it's been really effective. But for some reason I never manage to get myself into gear and prepare on a regular basis.

2. Having The Courage To Speak To Strangers In My Target Language

This is the fear villain, pure and simple.

I've been trying to coach myself through this for years. “Just do it, Olly, what's the worst that can happen?”

But still, when I'm on the street and the opportunity presents itself, I often just can't bring myself to start a conversation.

Finally accepting that this isn't natural for me has made things easier, for sure. It's also forced me to prioritise regular sessions with a tutor, meaning that I can get my “air time” in a comfortable environment.

Still, I sometimes wish I had more raw confidence to just start speaking!

Without a doubt, this is the single most powerful language learning habit there is, and yet I still have to work so hard to make it happen.

10 minutes, 15 minutes, 30 minutes… it doesn't really matter. It's the consistency that's important (hello inconsistency villain!). And I know this. But I still struggle with it.

This is not a language problem. This is a self-discipline problem, and I'm just not a particularly disciplined person.

Being aware of this flaw (and I do consider it a flaw – but am I being too hard on myself?), and coming to understand the importance of regular daily study has been a big eye-opener.

These days I make the “do something in my target language” mantra my single goal for the day, and it helps.

Right now, I'm dividing my language learning time between Cantonese and Arabic, and to be honest, it just doesn't work.

I don't know why I still do it.

I think it's because my Cantonese studies were interrupted last year when I moved to Egypt, pretty much forcing me to either choose between the two, or try to do both a the same time.

Not wanting to leave Cantonese behind, and not being prepared to live in Cairo without learning Arabic, I tried to keep both up… and ended up not getting very far in either.

I don't think you can effectively learn two languages at the same time. So why can't I just abandon one of them?

5. Remembering To Review My Language Learning Flashcards As Often As I Should

Love 'em or hate 'em, flashcards that use a spaced repetition system are a big deal in the language learning world.

I use them extensively, not just as a way to memorise new words, but to actually store my vocabulary in one place, because I find vocabulary notebooks to be a bit like black holes – swallowing everything you put into them, never to be seen again.

During those times that I study my flashcard decks regularly throughout the day, my vocabulary goes through the roof.

Often, though, I just forget to do it.

And I've yet to figure out an effective way to remind myself to do it… and that really frustrates me!

6. Taking The Time To Regularly Practise And Maintain My Old Languages

I often say that I don't care so much, because whenever I need a language again in the future I'll be able to “reactivate” it after a few days in an immersion environment.

And this is true, but it also means that I can't easily switch into some of my weaker languages (especially French or Italian) on demand, which I'd love to be able to do.

7. Writing The New Script Of A Language From The Start

I really enjoy learning new scripts, however challenging they are.

I also know that the quickest way to get used to a new script is to start writing it right from the beginning, and not stop!

But I'm also an impatient person, and want I results as quickly as possible. Since I tend to start speaking a new language right from the beginning, having to make notes in the new script would just slow me down too much.

As a result, I tend to use transliteration (writing down what I hear using the Roman alphabet) so that I can keep speaking at the same time.

However, this really slows down the process of learning to write the script, and I'm usually too lazy to spend dedicated time practising the script on it's own.

Inevitably, I end up being able to speak quite well, but having the writing skills of a 4-year-old!

8. Going Back Over Written Corrections From My Language Teacher

Writing is a tough, but incredibly useful thing to do at all stages of learning a language. I tend to do quite a bit of writing, and I love sitting with my tutor as they dissect what I've written and give me feedback.

So why don't I look at that feedback again later, and maybe use it as further study material?

Failing to do this is a real waste of a learning opportunity, but I think I'm just too enticed by the “next thing” to go back and spend time on something I've already done.

9. Speaking Another Language In Front Of Lots Of People

Whether in a group, on stage, or at a press conference (and I've done all three), I get really self-conscious when everyone's listening to me speaking another language, and I know I'm not being as articulate as I could be in English.

I suppose this is as much social anxiety as a language problem, but that certainly doesn't make it any easier!

10. Not Spending Enough Time On Listening As A Beginner Language Learner

Have you ever met someone who's pretty good at speaking in another language, but can't understand very much?

That's often me, at the beginning. I'm so keen to start speaking that I neglect the hard work that needs to be done on listening.

I usually catch up eventually, as my strong speaking leads me to situations where I get to spend lots of time with people, and so get lots of real-life listening practice.

But it's a very inefficient way of doing things, and I should spend much more time on concentrated listening when I first start learning a new language.

11. Staying Motivated To Study Languages When I Don't Have Friends Around Me

I'm by no means the only person who struggles with this, but it's something that I'm very aware of.

I cut my teeth in language learning by being surround by friends who spoke the language I was learning. And as far as I'm concerned, there's no better motivator!

Since then, I've had the experience of learning languages in lots of different situations, but usually without lots of friends around.

And what a huge different it makes!

I've thought long and hard about this, and developed some pretty good strategies to stay motivated when you're learning in isolation (many of which I teach in my Language Leaning Foundations video course).

It's definitely one of the things I have to work hardest at, and may well be the most important thing of all… without motivation you won't last long! (There's more at stake too…motivation can also have an effect on your memory!)

12. Reading Anything Longer Than 3-4 Pages In My Target Language

It's often surprisingly hard to find reading material that's not only at the right level for you, but also interesting to read. I solved my own problem by creating a series of short story books in multiple languages.

And I really struggle to read anything that I'm not very interested in.

Sometimes I wish I was more studious. I think it would have some real knock-on benefits for my language learning.

But for now, give me something to read that doesn't interest me… and I won't last more than a few pages!

13. Going Back To Review What I've Written In My Vocabulary Notebook

Why do I bother writing so much down in my notebook if I know for a fact that I won't bother looking at it again?

I'm stumped by this, and yet I continue to do it. (The definition of madness?) 🙂

I suppose the act of writing things down does help it all sink in, but how much more would I learn if I just went back and reviewed it thoroughly?

In fact, I've had to develop my own special strategy for dealing with my vocabulary notebooks, which are regularly out of control.

14. Learning Languages When I'm Not In The Mood

I'm starting to think that solving this particular problem will be my life's work.

The best solution for the “laziness paradox” that I've found so far is to have external enforcement measures that I can't get out of, thereby forcing me to study.

But I really wish I could just be more in control and a little bit more grown-up about the whole “study” thing!

15. Finding Ways To Be Genuinely Immersed In The Target Language

After studying hard for a while and getting to a decent (but not quite good enough) level in your target language, often the only thing that's missing is time spent immersed in the language. (Luca Lampariello wrote an excellent article series about this here).

I'm at that point in both my Cantonese and my Arabic right now. What I really need to do in order to take them to the next level is just spend some extended time (2-3 days) totally immersed in the language – listening and speaking around the clock.

But I don't really ever take the time to make this happen. I haven't really thought about why not.

16. Language Partners And Tutors Who Speak In English

Frustrating and inefficient in equal measure, when you're in the middle of a lesson or a language exchange and the other person just keeps talking to you in English, it can be difficult.

The irony is that I know exactly how to solve this problem, and have even written extended blog posts about it (here)… but I often don't do it myself!

Perhaps it's my English sensibility (not wishing to offend), or perhaps it's that I'm often genuinely interested in the conversation and would rather finish that in English than practise my target language.

Either way, this is something that I always seem to struggle with, and probably always will!

What Are Your Biggest Language Learning Problems?

So there's my open and honest “little black book” of language frustrations, struggles and annoyances!

And then, leave me a comment below with your #1 frustration in language learning.

Trust me, it feels good to get it off your chest!