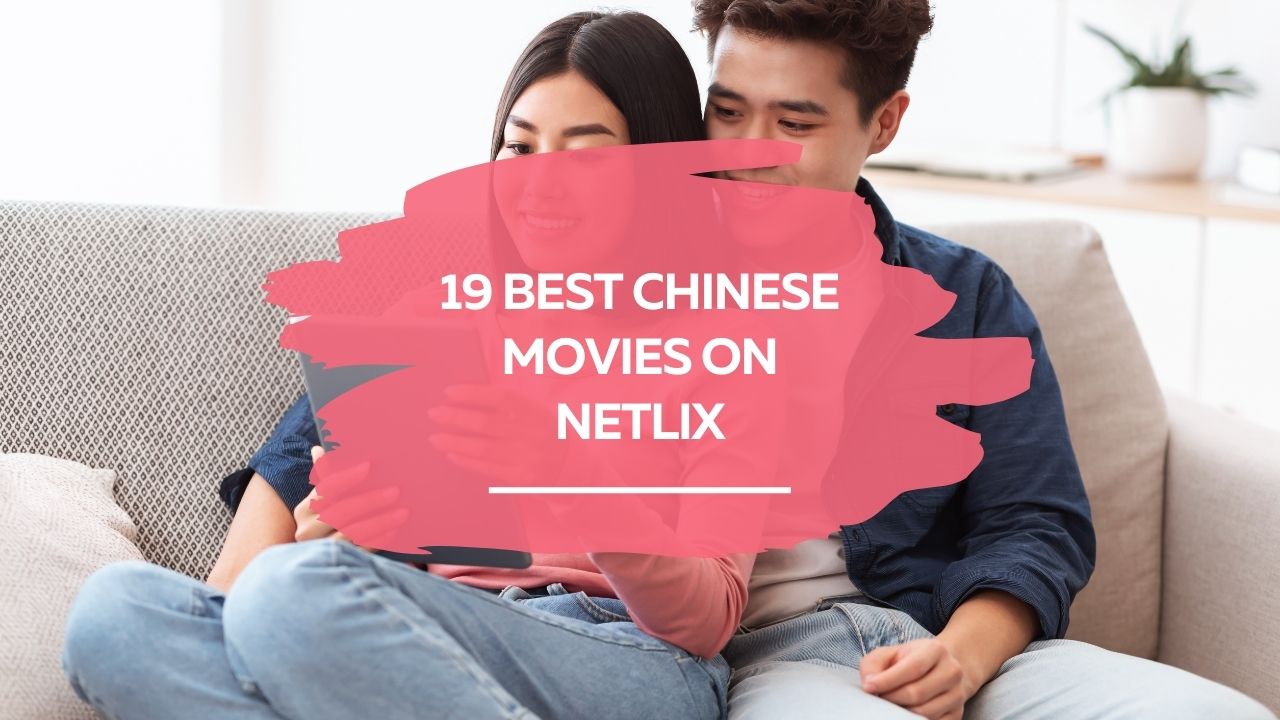 If you're learning Chinese and are up for a challenge, you might want to have a go at watching Chinese movies on Netflix.

Make no mistake, this is a high-level activity. And not everyone will be able to manage. But if you think your Chinese is up to it, there’s nothing to stop you trying.

So if you want to go for it, here are 19 Chinese movies on Netflix that you might find interesting.

With Chinese Uncovered you’ll use my unique StoryLearning® method to learn Chinese through story…not rules. It’s as fun as it is effective. If you’re ready to get started, click here for a 7-day FREE trial.

A touching love story about a woman who falls in love with a policeman only to find out that he has a debilitating disease that is gradually causing his mind to deteriorate.

Produced and directed by famous Hong Kong director Andy Lau, this is a film charged with emotion and sentimentality that will also help you practise your romantic vocabulary in Chinese!

A comedy of schemes, betrayal, outrageous behaviour and revenge, this creative and experimental film received positive reviews and achieved financial success both in China and internationally.

The Chinese title is ‘I am not Pan Jinlian’, which refers to a notorious villainess of 17-century Chinese literature. But it was changed to ‘Madame Bovary’ in English to resonate better with Western audiences.

For those looking to get their science-fiction fix, The Wandering Earth should be high on your list of films to watch.

Based on a Chinese novel of the same name, it tells the story of a group of astronauts tasked with saving the Earth from being swallowed up by the expanding Sun.

On its release, it became one of China’s highest-ever grossing films. So if you want to see how China does blockbusters, this would be a great place to start.

A martial arts film from renowned director Zhang Yimou who is probably best known in the West for his film Hero – as well as being the director of the opening and closing ceremonies for both the summer and winter Olympic Games in Beijing.

Set in ancient China, this tale of warriors, heroes, murder and intrigue is one that all fans of this genre will enjoy.

A drama about falling in love, chasing dreams and the wrong decisions we sometimes make in life.

The Chinese title of this film translates as ‘future us’. And the narrative switches between the past and the present, representing the past and present ‘us’ and ‘them’ of the English title.

The past scenes appear in colour while the present scenes are in black and white. This creative approach gives the film a rich layer of extra pathos.

Based on a video game of the same name, this film tells the story of a war between two kingdoms, the Southern Zhao and the Northern Yan.

Although the plot is rather simple, it’s still a fun watch for those who enjoy fantasy and adventure. It will appeal to those who like other video game-movie crossovers and who don’t want anything too deep or taxing.

The fantasy martial arts genre represents Chinese cinema particularly well. So if that’s something you enjoy, you’re spoilt for choice.

However, if you don’t know which one to watch next, this box office hit about demons, spirits, quests and adventure will keep you entertained while you work on improving your Chinese listening skills.

Although this fantasy epic is an animated film, it’s for teenagers rather than children since the plot is surprisingly complex and intricate.

The Chinese name for the film translates as ‘The big fish and the Chinese flowering crabapple’. And the story takes place in a fantasy world of magical beings.

It’s an uplifting, heart-warming film and a great option for anyone who wants to try watching a movie in Chinese.

Another film by Zhang Yimou, this time set during China’s Cultural Revolution.

It tells the tale of a girl who falls in love when she is sent to the Hubei countryside for ‘re-education through work’, dealing with the theme of the dangers of falling in love with the wrong person during those times of political persecution.

A recommended pick for anyone wanting to gain an insight into life in China during the time of Mao.

An award-winning Taiwanese film, Secret tells the love story of two students who meet while attending a famous music school. The Chinese version of the title means ‘the secret that can’t be told’. And it refers to a mysterious piece of piano music.

When the music is played on a special old piano, something unexpected happens, as is revealed as the film progresses.

The Chinese name of this film translates as ‘Beijing meets Seattle’. And it’s a romantic comedy about love and relationships that takes place in China and the US.

It was a big commercial success in China. And spawned many other similar movies in a similar vein – as well as giving the city of Seattle a boost in the number of Chinese visitors after the film was released.

Although not a huge success at the box office, this original and creative film is one that people who prefer more artistic cinema will like.

It tells the story of the lives of a group of blind massage therapists. And since it’s a film that’s based much more on dialogue rather than action, it’s the kind of thing advanced learners will benefit from watching.

The premise of this film is that the protagonist has an accident. And when she wakes up, she finds she has lost five years of her memories.

However, even worse, she discovers that she is now divorced, that her best friend has become her enemy and that many of the people she knew before now want nothing to do with her.

As the story unfolds, she begins to understand what has happened, discovering something that led to these jarring changes in her life.

This big-budget animated movie sometimes known simply as Green Snake is a spectacular all-action adventure story about demons, magic and immortality in the classic Chinese style.

You might also consider watching the original White Snake first since this more recent film is the sequel.

A Taiwanese thriller set in the future that begins with a suicide and then tells the story in reverse order of the events that led up to it.

The plot involves a complicated web of relationships, betrayals and surprises, making this an intriguing film that pulls you in and keeps you hanging on till the end.

This movie is a romantic comedy about a hard-nosed businessman who does deals taking over hotels. And a secret chef who gets the job of cooking for him to keep him from turning her hotel into a different business.

Adapted from a novel entitled Finally I Get You, the film premiered in 2017 and went on to collect several awards.

A touching story of love, tragedy and the consequences of China’s one-child policy. It was described by Rotten Tomatoes as a ‘heart-breaking saga of family tragedy against the changing face of modern China’.

It’s not exactly something to watch if you’re looking for light relief. But it’s the kind of film that will stay with you long after the final credits have rolled.

Set at the end of the 1980s, this Taiwanese film is the story of the love between two male students and the pressures and troubles they face from society and their peers because of it.

This movie was nominated for five Golden Horse awards at the Taipei Film festival and went on to be the highest-grossing LGBT film in Taiwanese history.

A typical Chinese action film set in the time of the Tang dynasty that showcases the epic landscapes of western China.

It tells the story of a former officer who was expelled from the army for mutiny and forced to live as an outlaw in the Gobi Desert and a man sent to kill him.

If you enjoyed Hero, this is a film you should like. And it’s also accompanied by a particularly impressive original soundtrack.

How To Watch Chinese Movies On Netflix In Chinese

To find these and other Chinese movies on Netflix, first, select the ‘audio’ tab and then click on ‘language’. This will give you the option of viewing all the films available in Mandarin.

When watching a film in Chinese, it’s best to avoid using English subtitles. It’s much better to use Chinese subtitles, even if you can’t read everything, because if you read in English, you won’t listen to the audio and your Chinese won’t benefit.

Bear in mind that watching and understanding a film in Chinese will require a high level of ability. So if you try it, try not to become disheartened if you don’t understand everything at first.

You can always watch a film a couple of times to try to pick up the details you missed first time round.

For beginners, perhaps the best place to start is with modern dramas since the characters use more current language. Sometimes the dialogues in historical movies can be harder to understand.

Above all, choose something you enjoy watching, and don’t worry if you don’t understand every word. Then, if you keep watching films in Chinese, you should eventually notice that your comprehension starts to improve.

Chinese Movies On Netflix: A Great Resource For Higher-Level Learners

Watching movies in any foreign language is a challenge. And you'll need a high level of Chinese if you hope to be able to understand the dialogues and follow the plots.

However, if you already have an advanced level of Chinese – or are just curious to try – watching films is a great way to practise. And Chinese movies on Netflix are an excellent resource with film options to suit just about any taste.

For more ideas on what to watch in Chinese, check out the 15 best Chinese shows on Netflix for Chinese learners.