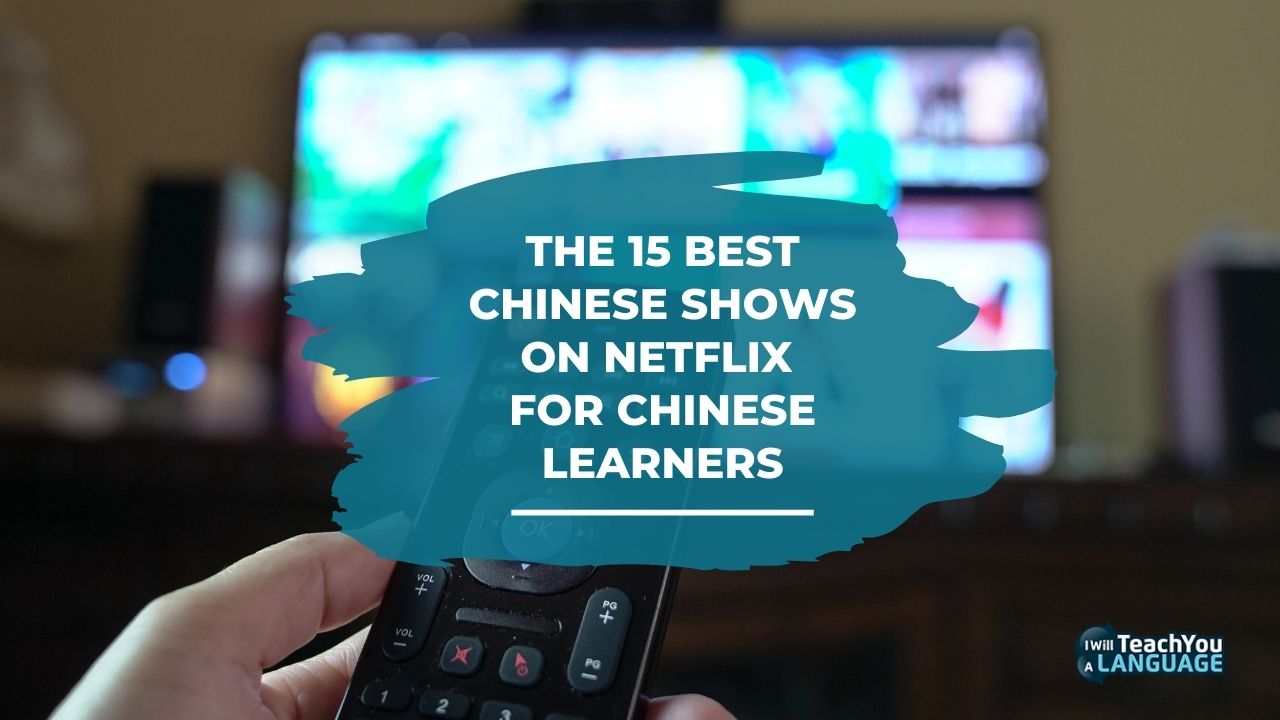 The 15 Best Chinese Shows On Netflix For Chinese Learners

If you're learning Chinese, thanks to the internet, you now have access to an almost unlimited source of language learning materials.

And if you want to find something authentic to listen to or read in Chinese, a quick search online will turn up a huge range of possibilities.

With a Netflix subscription, you can also choose from a wide selection of foreign language films and TV series, making this another valuable tool in your quest to master a foreign tongue.

However, due to the almost bewildering array of series available, finding the best ones can be a challenge. So, for anyone learning Chinese, here’s my pick of 15 of the best Chinese shows on Netflix that will help improve your language skills.

No matter your favourite genre, you're guaranteed to find something you love in this list. Get ready to boost your Chinese listening, pronunciation, reading skills and more. All while watching TV!

Set in an imaginary world 100 years after a devastating war, this series tells the story of the conflict between the Ice Tribe and the Fire Tribe.

A show that will appeal to fans of fantasy, its 62 episodes are filled with scheming, intrigue and plot twists aplenty – not least when the identity of the leader of the Fire Tribe is revealed – ensuring you’ll keep going back for more.

Set in 1930s Tianjin (“Tientsin” is the old spelling of the name of the town), this series begins with an investigation into some mysterious drownings.

At first, the police believe they have found the culprit. But then things take a decidedly supernatural turn. The series consists of a single season of 24 episodes and is ideal for those who enjoy mystery, excitement and a touch of the occult.

Another detective story, this time set in the present, Day and Night is one of the most popular Chinese TV shows of all time. It features a pair of detectives working together to try to clear the name of the suspect in a grisly murder case.

But there’s a twist, and suddenly, not everybody is who they seem. The actors speak with a typical Beijing accent, so this show is a good pick if you want to focus on the standard dialect of the capital.

This series tells the story of a champion e-sports player, Ye Xiu, who is forced to leave his team due to a disagreement over a sponsorship deal.

However, with his e-sports career seemingly over and working nights in an internet café to pay the bills, Ye Xiu meets Chen Guo, a girl with a grand plan to launch a new e-sports team with him as her partner.

This is a highly popular series in China and currently consists of 40 episodes…and counting.

#5 The Legend Of White Snake

Based on an ancient Chinese legend of the same name, this series tells the story of a doctor who falls in love with a beautiful woman. However, the woman turns out to be an ancient snake spirit who took human form to test and challenge him.

The show is in the classic tradition of Chinese fantasy. And it’s sure to find favour among those who enjoy tales of mystery and magic from ancient China.

Chosen is the Chinese remake of an American series of the same name that originally appeared in 2013. Since it is set in Australia, some of the dialogues are in English.

This might make it easier if you are only just finding you feet in Chinese because the English sections will help you understand the storyline. The actors speak standard Chinese. Although one of the main actors has the slight hint of a Taiwanese accent.

#7 Take My Brother Away

This series is a teen comedy about the schoollife of a pair of siblings. It’s a good choice if you're a younger learner since you'll be able to relate to some of the issues the series deals with. And you also learn a bit about the life of teenagers in China and the challenges they face.

There’s plenty of real spoken Chinese in there too – pronounced in clear and authentic standard mainland Chinese – so this is a show that will benefit your Chinese listening greatly.

#8 A Love So Beautiful

If you enjoy teen romance, you’re sure to want to try this series. It’s the story of two childhood sweethearts – a girl who falls in love with a boy and then does everything she can to win his affections.

It has just the right blend of love and romance mixed with enough drama to keep things interesting. And for anyone who enjoys that kind of show, it’s sure to be a big hit.

Meteor Garden is another teenage comedy-romance series, this time telling the story of a simple girl who gains a place in a prestigious school and falls in with the “F4”, the four richest and most handsome boys on the campus. The series ran for over 50 episodes, so it’s one that will keep you busy once you get into it.

This series of over 40 episodes focuses on the career of a young entrepreneur who finds herself caught in a complicated situation between a love interest of her own age and an older executive whose intentions are not altogether honourable.

This is a typical Chinese drama that offers you plenty of opportunity to work on your listening while being sucked into the engrossing storyline.

Word Party is a TV series for young kids. But as a learner of Chinese, there’s nothing wrong with that.

This could be a great option if you’re just stepping up to the level of native-level listening materials since the kind of Chinese used in kids’ shows is often much simpler than what you’ll find in programmes meant for adults.

This show is essentially designed to help toddlers learn to speak. And watching it can give your Chinese skills a boost too.

#12 Once Upon A Time In Lingjian Mountain

A classic martial arts series that includes plenty of action as well as all the usual sub-plots of romance, intrigue and betrayal.

There are some lighter moments too, making this a good series for someone who doesn’t want to watch something that is heavy on long and difficult dialogues.

The daughter of a powerful triad boss manages to land herself a job as the bodyguard of a famous actor, and this series tells the tale of the love story that develops as a result.

This popular show was launched in 2019 and has plenty of suspense and action to keep you hooked.

If you’re a fan of period dramas, this one should be worth checking out. Set during the Qing dynasty, the eponymous princess is forced to rely on her intelligence and intuition to navigate a dangerous world of intrigue, ambition and love.

There are only six episodes of this show. But this means it could be a good option if you want something you can watch more than once to really focus on your listening skills.

It’s fair to say that the Chinese love their food. And this documentary series will introduce you to a range of different cuisines from every corner of China.

Watching it will help you increase your knowledge of culinary vocabulary. And you’ll also learn about which dishes to look out for whenever you have the opportunity to travel in China.

How To Watch Chinese Shows On Netflix

To see the list of shows available in Chinese, log onto your Netflix account and select the “audio” tab. Next, click the “language” tab and you will see a drop-down menu of all the available languages. By selecting “Mandarin”, you will be shown all the shows available in that language.

When you watch, avoid using English subtitles. Otherwise, you will just read and won’t listen to the Chinese audio. However, if your reading level is good enough, you can choose Chinese subtitles to help associate the sounds of the spoken language with the vocabulary you already know.

The key to improving your listening is making it as active as possible. Simply watching TV passively won’t benefit you much. So try to think of ways of engaging with what you watch.

For example, after each scene, you can hit pause and write a quick summary of what just happened. Alternatively, note down a few important words as you watch, hit pause after each scene to look up the meaning and then watch the same passage back, trying to hear them again in context.

Above all, you should enjoy what you watch, so choose something that interests you. This way, you will want to come back for more, helping you build a habit of watching TV in Chinese as often as possible.

A word of warning, though – watching and understanding TV shows in any foreign language can be difficult. And you will only benefit from it if you already have a good level in the language.

If you don’t have a high enough level, simply sitting in front of hours of Chinese TV will do very little for your language skills. And there are much more useful and efficient things beginners can do to improve their Chinese.

Chinese Shows On Netflix – Plenty Of Options For All Tastes

Whether you are interested in fantasy series, martial arts, detective stories, romance, comedy or documentaries, there’s sure to be a Chinese show on Netflix for you.

Try a few to find the ones you enjoy most and get into the habit of watching a little bit every day if possible.

Then, if your level is good enough, you will quickly see that watching Chinese shows on Netflix can help you boost your language skills, from listening to pronunciation via reading and more.

Go grab some popcorn and settle down to watch one of these Chinese TV shows.