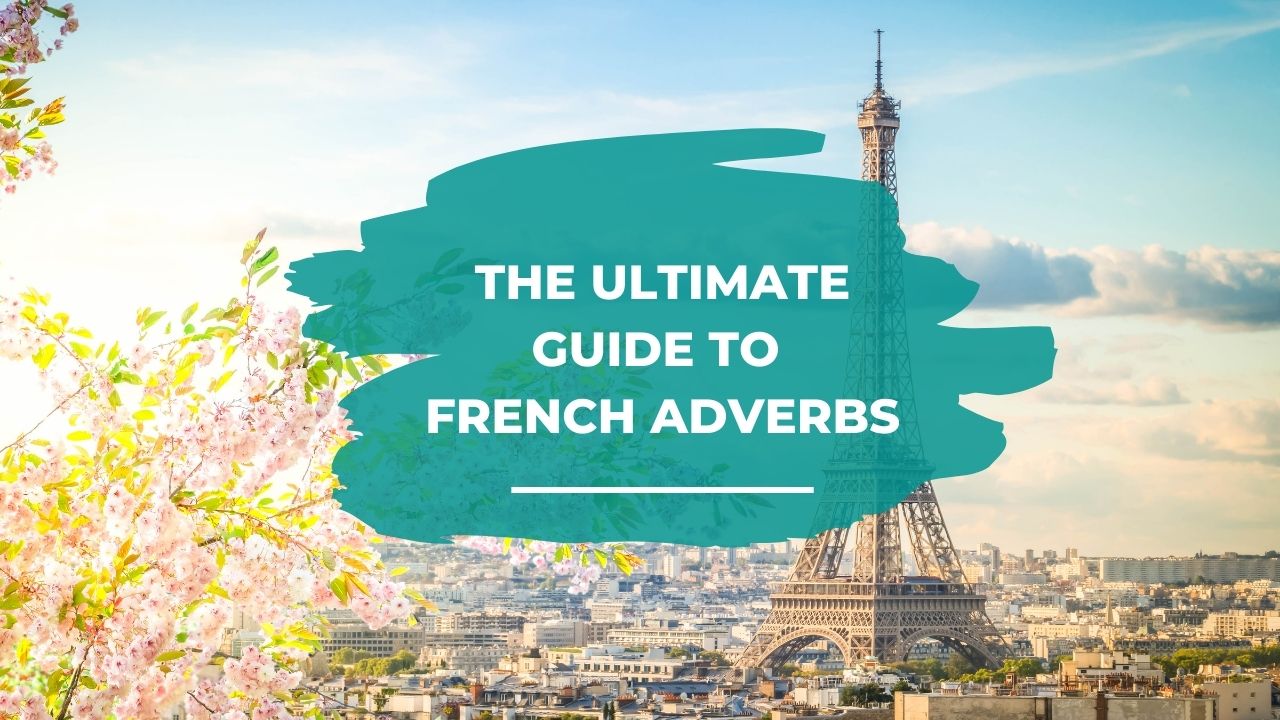 The Ultimate Guide To French Adverbs

When learning French, the best way to master grammar is through practice and use, the same as when you learned to speak your first language when you were a baby.

By listening to native speakers and copying what they say, you will learn the correct forms to use without needing to consciously study the rules of grammar.

Indeed, people who reach a high level in a foreign language are often unaware of the grammar they are using because they just “picked it up” naturally.

However, as a learner, it is also important to have an idea of the rules behind what you are saying, so to help with one key aspect of French grammar, here is my overview of adverbs in French.

As always, let’s start at the beginning – what’s an adverb?

As you may guess from the name, an adverb is a type of word that tells you something about a verb. For example, in the sentence “he runs quickly”, “quickly” is the adverb that tells us how he runs.

We can’t say “he runs quick” because “quick” is an adjective – the correct form, the adverb, is “quickly”.

However, as well as describing verbs, adverbs can also be used to describe adjectives or even other adverbs.

In fact, adverbs can also be used to describe whole sentences, but we don’t need to go into this level of detail here.

Other adverbs don’t come from adjectives. Words like “tomorrow”, “inside” and “very” are also all adverbs because they are used to give more information about verbs, adjectives or other adverbs, like in these sentences:

Just like in English, many French adverbs are formed from adjectives – and many more exist independently.

In French, most adverbs that come from adjectives are formed by adding the ending -ment to the feminine form of the adjective.

Where adjectives end in -ant or -ent, the adverb is formed by replacing this ending with -amment and -emment respectively, like this:

Note that both endings are both pronounced as if they were spelled -amment.

A few adverbs exist with the ending -ément – these may come from the adjective form or be derived from other related words. Here are a few examples:

There are some forms that don’t follow these rules exactly, and there are other adverbs derived from adjectives that may be completely irregular. Here are some common examples:

Use Of Adverbs In French

Broadly speaking, French adverbs are used in much the same way as they are in English.

When using sentences like this, in French as in English, be careful not to use an adjective when an adverb is required.

Look at this pair of sentences:

When an adverb describes an adjective or another adverb, it precedes the adjective or adverb, just like in English – as in the examples above: extrêmement triste and très peu.

In simple tenses, the adverb usually also comes directly after the verb, as in English – again, as in the example we just saw, il joue bien.

However, with compound tenses, there are a couple of possibilities, depending on the emphasis of the sentence.

In this sentence, the focus is how I read it. You want to emphasise that I read it slowly, so you put the adverb after the past participle, lu.

This is probably the most common type of sentence, but if you want to emphasise the action rather than the manner, you can place the adverb before the past participle.

In the first version, we want to stress that it has happened “already” – perhaps we want to express surprise that he ate before we expected. However, in the second sentence, we are merely saying that he has eaten, and the emphasis is just on this rather than that it happened earlier than we expected.

Sometimes, the difference between the two options can be subtle, and often, you can vary the word order without changing the meaning much, if at all.

Comparative And Superlative Adverbs In French

To form comparative adverbs expressing “more” in French, you add plus before the adverb, like this:

If you want to say “less”, you add moins before the adverb, like this:

For superlatives, it’s almost the same – you just need to use le plus or le moins, like this:

There are also three adverbs with irregular comparative and superlative forms:

The words we use to make negative sentences are also considered adverbs since they describe verbs, telling us they are negative. These words include the following:

These adverbs are usually combined with ne to form negative sentences, like this:

The topic of negative sentences is big enough to warrant a separate post, and since most people learn how to use negative adverbs as a separate part of grammar, I won’t go into any more detail here!

In English, sometimes we use adjectives as adverbs without changing them, for example:

In the case of fast, the adjective and adverb forms are the same; in the case of “hold tight”, this is a set expression – if you told someone to “hold tightly”, the meaning would be different.

French also has some similar cases where adjectives are used as adverbs without changing, for example:

These are just a few examples that don’t follow the usual rules, and when you come across others, you should just take note and remember them as set expressions without complicating things further.

As an aside, if you say se sentir bien, the meaning is quite different – it means “to feel well”, so compare these two sentences:

So you can see how important it can be to remember these kinds of expression accurately!

As we have seen, in French, -ment and other similar endings can be seen as the equivalent of the ‘-ly’ ending in English. However, you shouldn’t imagine that you can change any adjective into an adverb just by adding this ending because it doesn’t always work that way.

In fact, it is a less reliable way of forming adverbs in French than it is in English, so you just have to remember which ones work and which ones don’t.

Often, French prefers to avoid using an adverb, even when one is available, using a range of different words or expressions instead. Here are just a few examples:

In the first one, you could say incessamment, but sans cesse feels more natural in spoken French – just the same as using “incessantly” would feel wordy in a normal conversation in English.

Similarly, d’une voix triste could equally be expressed as tristement, although perhaps both of these would be ok in an informal conversation.

In the third example, sans hesitation can be thought of as a fixed expression that functions in the same way as an adverb. In the last example, the adjective content has no corresponding adverb, so you have to express this by using d’un air content.

Use And Practice French Adverbs, Not Grammar Rules

As I said at the beginning, we learn to use correct grammar through practice rather than memorising rules from a book.

This is perhaps even more true with French adverbs than some other areas of grammar since, for the most part, they behave a lot like adverbs in English.