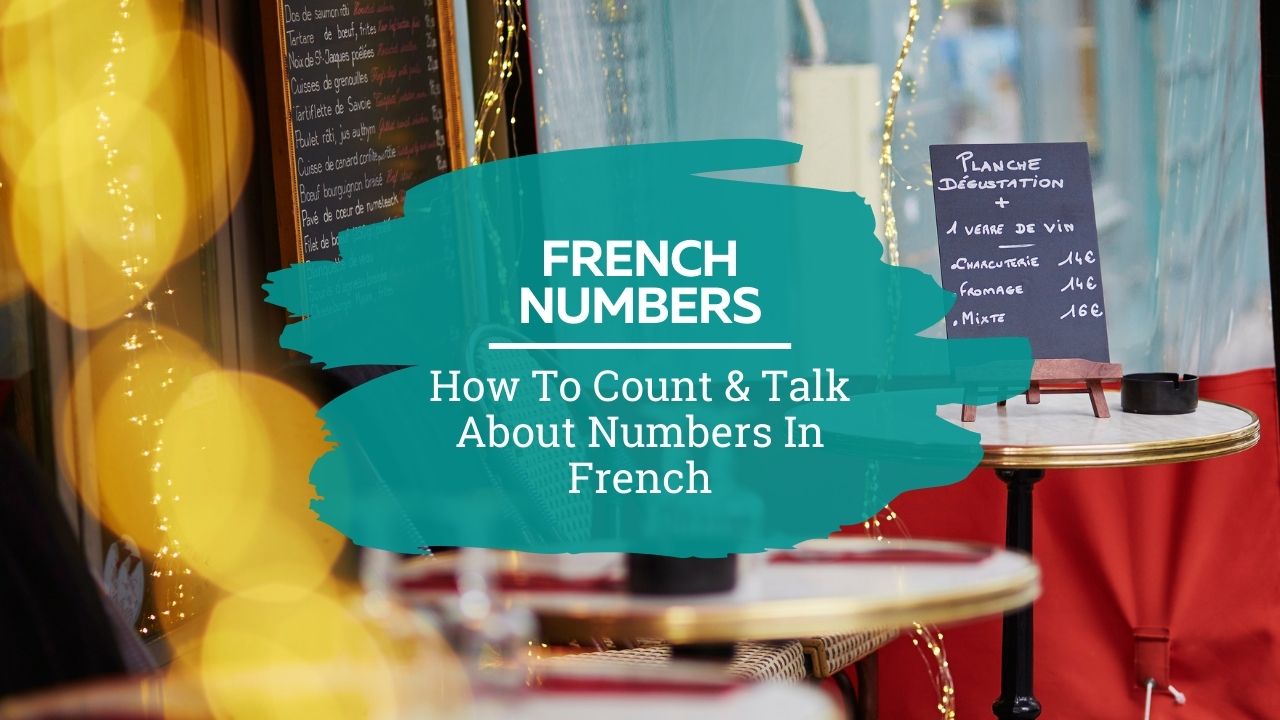 French Numbers: How To Count & Talk About Numbers In French

When you start learning French one of the first things you need to learn is French numbers. Without numbers and knowing how to count, you won’t be able to buy things in a shop, try on clothes or shoes, order drinks, ask about public transport – or a whole range of other things.

To be honest, French numbers are not the easiest in the world – but nor are they excessively hard – so to help you get started, here’s everything you need to know about counting in French.

Let’s jump right in – here’s how to count from one to ten in French:

There are several points to note about these numbers.

First, you will notice that there are two words for “one” – un is used with masculine nouns while une is used with feminine nouns, like this:

The same word is also used for “a” – in French, there is no distinction between “a” and “one”, but the meaning is always clear from the context.

Second, there are three possible ways to pronounce six and dix, depending on the word that follows.

When used alone (like when counting), the French pronunciation of six is very similar to the English word “cease”. Dix sounds the same – except that it starts with a ‘d’.

However, if the number is followed by a word beginning with a consonant, the ‘x’ is not pronounced, so they are pronounced “see” and “dee”:

Finally, if the number is followed by a vowel or an unaspirate ‘h’, the ‘x’ at the end of the number is pronounced like the ‘z’ in ‘sneeze’, so they sound like ‘seez’ and ‘deez’:

With neuf, if it comes before ans (years) or heures (hours), the pronunciation is like a ‘v’ – but before other words beginning with a vowel or unaspirate ‘h’, it is pronounced as an ‘f’.

There’s nothing too difficult about these numbers. The numbers from 11 to 16 all have a unique word in French, but 17, 18 and 19 are formed by combining the word for “ten” and the word for “seven”, “eight” or “nine”. This means you are literally saying “ten-seven”, “ten-eight” and “ten-nine” – although it’s best just to remember them as single words.

Counting To 69 In French

As you can see here, these numbers are made by simply adding the “unit” to vingt – and attaching the words with a hyphen when written.

The exception is 21 – for this, instead, you add et un (with no hyphen) – so literally, you say “twenty and one”. Also, notice that 21 agrees with the gender of the thing you are counting:

With vingt, the ‘t’ is usually silent, but it is pronounced when followed by a vowel or unaspirate ‘h’. The exception to this rule is when expressing dates:

70 in French is soixante-dix, which literally means “sixty-ten”. Following this, 71 is soixante et onze – literally, “sixty and eleven” (with no hyphens).

In a way, this follows the same logic of the numbers from 20 to 60 – but it still might take a bit of getting used to at first.

Next, let’s look at 80, which, in French, is quatre vingts (no hyphen) – or literally, “four twenties”. Again, slightly odd, but in old fashioned or literary English, you might sometimes see “four score”, so it’s not totally strange.

Remember too that quatre-vingt-un agrees with what you are counting:

With the ‘eighties’, the ‘t’ in vingt is NEVER pronounced – and the same is true of the ‘s’ in quatre vingts.

Finally 90, which, in French is quatre-vingt-dix. This literally means “four-twenty-ten”, and at this point, you might start wondering if the French didn’t set out with the deliberate intention of creating the most perverse way of counting they could come up with. Well maybe, but that’s just how it is, so there’s no point in complaining!

With the ‘nineties’, the ‘t’ is also not pronounced.

Here are the numbers we’ve just covered for reference:

The system above is used in France as well as in Canada, but if you’re thinking this way of counting seems a bit contrived, maybe you’re not alone – because French speakers in Belgium and Switzerland don’t use it either!

In Belgium, they replace soixante-dix with the much more reasonable septante, and nonante is used instead of quatre-vingt-dix.

French speakers in Switzerland also have octante instead of quatre vingts – although Belgians use the same number for 80 as in France.

However, the system you should learn is the regular/international version we covered above – unless you are living in Switzerland or Belgium where the alternatives are used.

Note that all the other rules apply to these numbers, so it works like this:

The bigger numbers in French are simple. Here they are:

Cent takes an ‘s’ only when not followed by another number – deux cents but deux cent un(e).

Also, there is no un before cent or mille – but it is used with un million and un milllard.

Million and milliard also need de (‘of’) if followed directly by the thing being counted:

Unlike in English, there is no et after cent, mille, million or milliard: 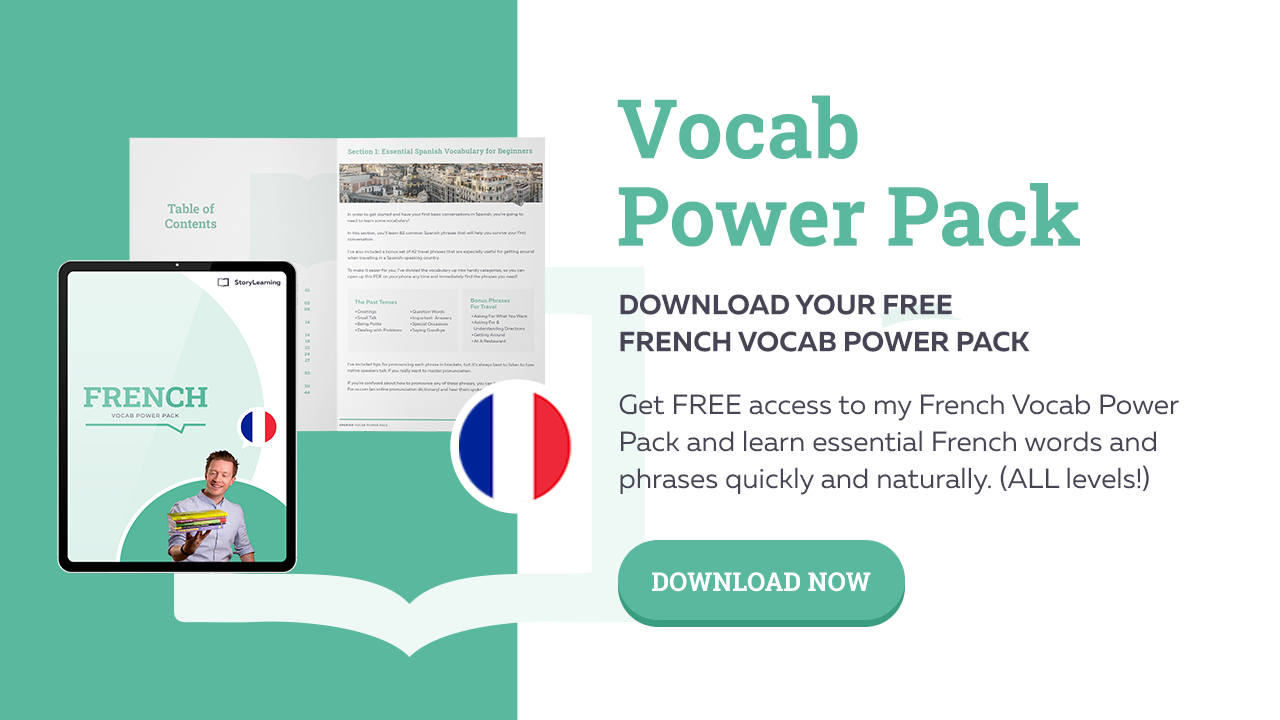 Ordinal numbers are the numbers like “first”, “second” and “third”. In French, they’re very easy – you just add -ième to the cardinal (‘regular’) number. If the cardinal number ends with an ‘e’, you also need to remove that first.

There are just three exceptions – premier (first) (or première because it agrees with the noun it is used with), cinquième (fifth) and neuvième (ninth).

Here are the first ten:

And it’s the same for bigger numbers too:

Like with English, there are abbreviations for these numbers. You simply add a small ‘e’ next to the number to indicate an ordinal number – or a small ‘er’ (or ‘ère’) for ‘first’:

Finally, note that a less common alternative to deuxième is second/seconde.

Fractions And Decimals In French

In French, “a half” is un demi, “a quarter” is un quart and “a third” is un tiers. For other fractions, it’s the same as in English – the number on top of the fraction is said as a cardinal number and the number on the bottom as an ordinal number:

Note that if the top number is higher than 1, the bottom number is plural, like in English.

Don’t confuse demi with demie. The first means “half” and is attached to what it describes with a hyphen. The second means “half an hour” and is used when expressing “half past the hour”:

However, in normal speech, to express half of something, you use la moitié:

“Quarter to” the hour and “quarter past” the hour are expressed as moins le quart and et quart:

In French, you use a comma – virgule in French – for decimals, rather than a dot:

To separate thousands, you use a space – although before, it was normal to use a dot (so the opposite of English):

The French word for “zero” is the same as English, zéro.

Finally, let’s have a look at a couple of examples of when the usage of numbers differs between French and English.

When saying the date in French, you use the cardinal number rather than the ordinal number. The exception is for the first of the month, when you use premier:

With dates including the numbers 8 and 11, the le is said separately:

For years, you just say the number – you don’t split the number in two, unlike in English:

Kings and queens follow the same pattern as dates – premier/première is used for “first”, and after that, you just use the cardinal number. In French, you don’t use le.

Not So Hard After All

As you can see, when counting in French, there are a couple of tricky points to remember – but on the whole, it’s still relatively easy. The best advice is just to try to remember things like 70, 80 and 90 as individual words rather than trying to ‘work them out’ each time you say them.

At the same time, you'll also hear French numbers as you immerse yourself in French daily, whether that's by reading and listening to a short story in French, listening to French podcasts or watching French movies. Count on numbers coming up as you make contact with the language!