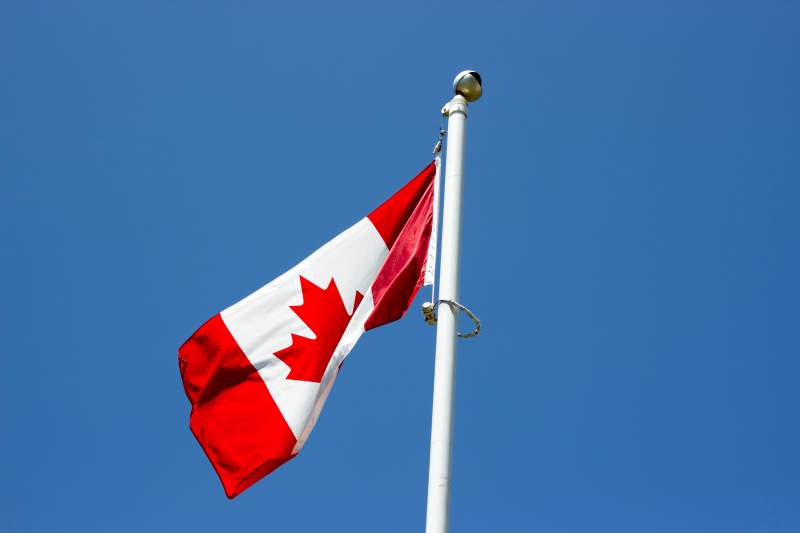 One of the advantages of learning French is that you're learning not only the language of France, but of many countries and territories around the world.

You no doubt know that French is spoken in Canada along with English. But have you ever wondered why?

If you’ve ever wondered about these or similar questions, here are the answers you’ve been looking for!

By the end of this post, you'll know the 3 main differences between Canadian French Or Quebecois French and the French of France. You'll be ready for a trip to the French speaking parts of Canada.

Speaking of which, let's kick off by talking about why and where people speak French in Canada.

Why Do They Speak French In Canada?

French is spoken in parts of Canada for quite logical historical reasons. To cut a long story short, the French were the first to establish significant settlements in what is now Canada.

Back then, they called it New France. However, after a war with the British, France was forced to cede its North American territories.

The result was that the minority English-speaking Protestant victors found themselves ruling over a large French-speaking Catholic population. Rather than force the colonists to change their language and their religion, the British allowed them to continue speaking French and practising Catholicism.

From that point on, the French spoken in Canada has followed a different trajectory to the language of France, with some interesting results – as we shall see.

Where Is French Spoken In Canada?

As you may know, the French-speaking population of Canada is concentrated in the province of Quebec.

About 22% of Canadians speak French as their first language. And of those, around 85-95% are Quebecois.

Unsurprisingly, most of the other French speakers live in the areas surrounding Quebec itself, notably Ontario, New Brunswick, Manitoba and Alberta.

Incidentally, there are differences between the French spoken in Quebec and the other parts of the country. In this post, I’ll be focussing on the French of Quebec. But bear in mind this doesn’t tell the whole story.

On a federal level, French has equal status with English as one of Canada’s two official languages. Since 1977, French has also enjoyed the status of official provincial language in Quebec – where the local francophone heritage is vigorously and proudly protected.

In France, the Academie Française is the authority on the French language, taking responsibility for preserving it and maintaining its purity. In Canada, the Office Québécois de la Langue Française (OQLF) fulfils a similar role. And in many ways, does so much more zealously than its European counterpart.

For example, in Quebec, very strict rules are in place to prevent the “contamination” of the language by anglicisms. Whereas in France, you will commonly see ‘STOP’ signs while driving, the same signs in Quebec read ‘ARRÊT’.

A common Quebecois French telephone greeting “bonjour-hi” – intended mainly to let the caller know that either language can be used – has also been rigorously suppressed by the authorities.

In fact, this obsession with protecting the linguistic heritage of the province has occasionally reached levels of absurdity, as most famously occurred in 2013. In an episode that became known as “pastagate”, a restaurant was issued with an official warning for being in contravention of the language laws.

The establishment in question was an Italian restaurant. And it had attracted the ire of the language police for including words like ‘pasta’, ‘antipasto’ and ‘caprese’ on its menu. After much ridicule and a high-level resignation, the OQLF relented.

The controversy over Canadian French in Quebec runs deeper than fussing over menus, though. While it is understandable that people have a desire to protect their language, many say that by over-legislating, the authorities are actually putting young people at a disadvantage.

There's a law that native French-speaking children in Quebec must attend French-language primary and secondary schools. But after that, many choose to attend English-language universities.

There's a concern that this will gradually erode the status of the French language in Quebec. But the fact is, a native English-speaking Canadian has much less need to learn French than vice versa.

French-speaking Canadians who take classes in English are hardly likely to forget their native tongue. But it's argued that discouraging young Quebecois who want to improve their language skills from attending university in English will actually limit their development and opportunities.

It’s difficult to strike a balance. And the debate continues.

What Are The Differences Between French In Canada And France?

If you can get by ok with your French in France or Belgium and you think your knowledge of the language will prepare you for a trip to Quebec, you might be in for a shock.

Even native French-speakers from France can find Canadian French quite a challenge at first. If you have a good level of French but you’ve never heard Quebecois French before, look up Têtes á claques on YouTube and you’ll see what I mean.

Canadian French speakers can easily understand the French spoken in France (Metropolitan French) since formal Quebecois French is quite similar. But the problem for European French speakers comes when Canadians speak a more colloquial version of their language. That’s when the differences become most apparent. Let's check them out in the next section.

Perhaps the most obvious way in which Canadian and Metropolitan French differ is in vocabulary.

The vocabulary of the Canadian version of the language has developed in some interesting ways since the two became separated from the 17th and 18th centuries.

Let’s have a look at some of these now.

When the colonists in North America were essentially cut off from Europe, in a way, the French they spoke became frozen in time.

In Canada, you can still hear things like à cause que and mais que instead of parce que and mais (“because” and “but”), expressions that the French haven't used for centuries.

The French of Canada also reflects the importance of religion to the early Catholic settlers.

French Canadians consider words like tabernak (tabernacle), calvaire (Calvary) and câlisse (chalice) stronger profanities than the usual collection of swearwords based on sex and excrement in most other languages.

Another difference is in the use of loanwords.

You may read that Canadian French has borrowed far more words from English than European French. I’m not so sure that this is true. But what's certain is that the two languages have absorbed words differently.

An interesting example is “watermelon”. The European French word pastèque is a word of Arab origin, probably reflecting the fruit’s arrival in France via Moorish Spain.

However, watermelons were not widely known in Europe before the start of the 17th century. The Canadian French word melon d’eau is a direct translation of the English word, suggesting they were introduced to the Canadian colonists by speakers of English.

Other examples of this include pâte à dents for toothpaste instead of dentifrice used in France. And this tendency to translate continues today.

Now, where French in France simply uses the English word directly, giving us words like “weekend” and “skateboard” – much to the chagrin of the Academie Française – Canadian French prefers terms like fin de semaine and rouli-roulant.

With some words that have appeared in recent years, French speakers on both sides of the Atlantic have attempted to create French versions to replace the English ones.

For “email”, French speakers came up with courriel (from courrier and éléctronique). But you're much more likely to hear this word in Canada. The French generally choose the English word.

Related to this is the ingenious Canadian creation pourriel for “spam” – which combines courriel with pourri, the French word for “rotten”. The word pourriel is unknown in France.

However, Canadian French also has words taken directly from English that you won’t ever hear in France. You may come across verbs like truster (to trust) or watcher (to watch). however, the OQLF might frown upon such usages.

Loanwords From Other Languages

One thing that’s sure to throw French speakers from France are words borrowed from the native languages of Canada.

For example, while in France, people talk about sandales (sandals), the Canadian French word is babiches.

Another feature of Quebecois French that would confuse Europeans is its use of contractions.

You might sometimes hear that Canadian French hardly ever makes use of the subject pronoun nous, almost always replacing it with on. While this might be true, this is the case in France too and isn't specific to Canada.

One difference is that Canadians are much quicker to use the familiar tu form rather than the formal vous. Although even in Canada, you should still use vous to show respect in situations where required.

Some words that relate specifically to Canadian culture may be unfamiliar to European French speakers.

A good example might be poutine, the name of a beloved Quebecois dish of chips (“fries” for my North American readers!), cheese curds and gravy. Although poutine is now also known outside of Canada.

Some words have taken on different meanings with the passage of time. The word dépanneur in France refers to the person you call to help you out when your car breaks down by the side of the road.

However, in Canada, the same word now refers to a “convenience store”. I suppose the idea is similar – these shops help you out when you unexpectedly run out of something you need.

And then there's one word that deserves a special mention: gosses. In Metropolitan French, this is a colloquial word meaning “kids”. So if you say ça va tes gosses ? to your friend, you would be enquiring about how his children are doing.

However, in Canada, the meaning is slightly different. If you asked this question to a Quebecois, the meaning would be “how are your testicles?”. So probably a good expression to avoid!

The pronunciation of Canadian French is also quite different from Metropolitan French. And even a non-French-speaker would be able to tell that they aren't the same.

In some ways, the differences in pronunciation also reflect the fact that Canadian French was isolated from the French of France for several centuries. Apparently, modern Quebecois French sounds more like the Parisian French from the time when the colonists left for the New World.

The biggest difference is in certain vowel sounds. Although some consonants are also different. For example, words like maître and mettre that were once pronounced differently are now indistinguishable in France. But Canadian French still preserves the difference.

If you're familiar with the sound of Metropolitan French and want to hear how different Canadian French sounds, check out the Têtes à claques sketches on YouTube that I mentioned before.

You'll probably be quite surprised at how different – and how difficult to understand – Canadian French can be.

Finally, there are a few differences in grammar that are confusing if you're used to the grammar of European French.

To give just one example, the use of dont in Metropolitan French is very different in Canada.

So instead of hearing l’outil don’t j’ai besoin (the tool I need), in Canada, you might hear l’outil que j’ai de besoin. As you can see, quite a different construction!

And are perhaps more comparable to the differences between European and Brazilian Portuguese.

If you go to French-speaking parts of Canada, don’t be afraid to try your French. The people there are sure to love it if you try to speak their language.

But if you’re used to the French from France, expect a period of adjustment before you can understand French Canadians!