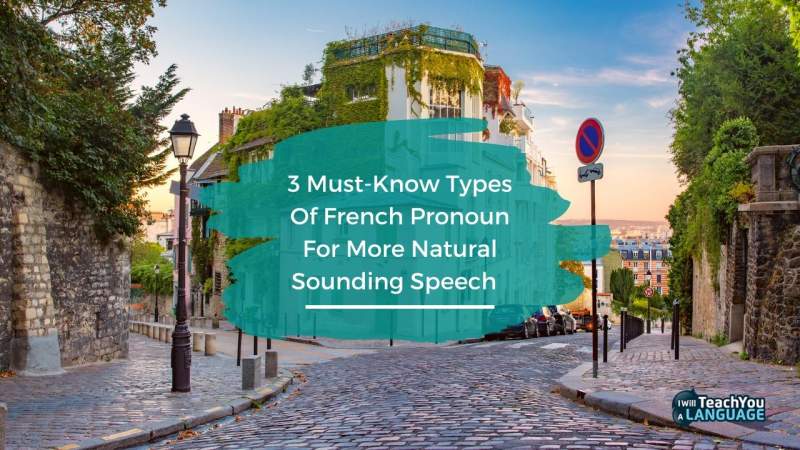 Pronouns are so common that when you speak English, you probably don’t pay any attention to them. But if you want to speak French at even a basic level, you need to know how they work.

So here, to help you get started, I'm introducing three of the most important groups of French pronouns in English that you will need for simple day-to-day communication.

What Is A French Pronoun?

Let’s start at the very beginning. What’s a pronoun? And what’s a noun for that matter?

Nouns are words for things. They can be real physical things like objects, people or animals, and they can also be abstract ideas or concepts. “Table”, “dog”, “headache” and “happiness” are all nouns.

Pronouns are the words we use to replace nouns to avoid repeating them lots of times in the same sentence.

In normal English, we wouldn’t repeat “Jane”, “her boyfriend” and “ice cream” like this.

Instead, we use other words to replace them, like this:

This sentence sounds much more natural using words like “he”, “her” and “it” – and these are all examples of pronouns.

There are several types of pronoun in French. And in this post, I’m going to be looking at 3 of the most important ones.

The first type of pronoun to look at is French subject pronouns. What are subject pronouns in French? The grammatical subject of a sentence is the person or thing that does the action.

In the sentence “Jane bought an ice cream”, Jane is the one doing the action, so “Jane” is the subject.

What are the subject pronouns in French? Let's take a look:

And some examples of them in action:

A Couple Of Things To Note About French Subject Pronouns

For the most part, subject pronouns in French work just like their English counterparts.

However, there are a couple of points to note. First, the French pronoun je, is abbreviated to j’ in front of words that begin with a vowel or an ‘h’.

Another thing you will notice is that there are two words for “you”. Tu is used when talking to a single person you are on familiar terms with.

Vous, on the other hand, is used either with someone who you need to show respect to (for example, an older person you don’t know very well) or when speaking to more than one person (whether you know them well or not).

You may also have seen that there is no separate word for “it”. This is because, in French, all nouns are either masculine or feminine.

So you use il or elle for things as well as for people. For example, if you're talking about un sac (a bag – masculine), you just use il, like this:

Also, you'll notice that there are two words for “they”:  ils and elles. Elles is used when a group contains only feminine people or things.

This means if you're talking about five girls, you use elles – but if it’s a group of nine girls and just one boy, the boy wins and you use ils. Sorry girls, that’s just the way French grammar works!

Finally, there's another very common French subject pronoun on, that I haven’t included in the list above. It's the equivalent to the English pronoun “one”, as in “one is not amused”. But this subject pronoun in French is employed much more widely than in English.

In informal settings, the French pronoun on is almost always used instead of nous, so for example, instead of saying:

It's much more natural to say:

In terms of conjugations, on uses the same form of the verb as il and elle. This is good news for you because by using the on form, you can avoid using the nous form altogether – which is a great shortcut when you’re first starting out!

The next type of pronoun we need to look at is French direct object pronouns.

If we go back to our sentence from before, “Jane bought an ice cream”, the object is “an ice cream” because the ice cream ‘receives’ the buying. This might seem a little more abstract, but the rules are the same.

In French, as in English, we can replace the direct object with a direct object pronoun. So the sentence above becomes “Jane bought it”.

Here’s the list of direct object pronouns in French:

And here they are in action:

A Few Points To Note About French Direct Object Pronouns

In negative sentences, the direct pronoun comes after ne and before the verb. It's important to pay attention to the order of French pronouns.

You'll also notice that there is no separate word for “it”. This is because in French, you use le or la, depending on whether you're replacing a masculine or feminine noun. This is similar to using the il and elle subject pronouns.

Another point to note is that me, te, le and la change to m’, t’, l’ and l’ in front of vowels – as well as in front of most words beginning with “h”.

The third kind of pronoun you need to know about is French indirect object pronouns.

Let’s take another sentence: “Jane gave the ice cream to her boyfriend”.

In this sentence, we have two objects, “ice cream” and “her boyfriend”.

However, in this case, while “ice cream” is a direct object, “her boyfriend” is what’s known as an indirect object because he receives the action indirectly – Jane gives the ice cream to her boyfriend.

The order of pronouns works slightly differently, so let’s look at that now.

Most of the French direct and indirect object pronouns are the same, but two are different.

Here are the indirect object pronouns in French:

And here are some examples:

As you can see, only the third person singular and plural have a different indirect object pronoun.

Lui is used to mean “to him”, “to her”, “to it” and leur is used to mean “to them”. This makes it easy for you since you don’t always need to think about whether an object pronoun is direct or indirect unless it's the ‘he/she/it' form or the “they” form.

The sentences we have looked at so far have only had one object pronoun. But sometimes it's possible to have two. Look at this sentence in English: “Jane gave it to him” (or “Jane gave him it”).

For French double object pronouns, the word order goes like this:

At this point, don’t worry too much about y or the French pronoun en. These are two other French pronouns that I’m not going to cover here. That’s a topic for another post! I’m including them here for completeness. But if you haven’t studied them yet, just ignore them for now.

Similarly, se is a reflexive pronoun. But again, we aren’t going to talk about them here, and I include them just so you can see how they fit in.

One final point to note is that pronouns from the first and third columns can’t be used together. In the rare situations when this would be necessary, you have to express the French pronoun order differently, like this:

There's a lot of information in this post. And I would suggest that reading all of it and trying to take it on board in one go is not the best way to approach it.

Rather, I recommend you dip into it as required to find the information you need as you work through the different aspects of pronouns in French.

And as always, remember that we don’t learn languages by memorising a French pronoun chart, grammatical tables and lists of words.

This post will help you understand how the language works and why you use particular forms in particular sentences. But the only way to truly learn and internalise all French pronouns is to practise. And that part is now up to you!

So look out for the pronouns as you immerse yourself in French. Whether you're reading French books or listening to French podcasts or watching French movies, there are loads of opportunities to see French pronouns in action.