How To Master French Prepositions Without Stress

When you learn French, French prepositions are likely to cause you trouble. A big part of mastering them simply comes through use, and there’s nothing that can replace this.

However, there are still some useful tips, tricks and shortcuts that can help you master the basics – and that’s what I’ll try to give you in this post.

What Are French Prepositions And Why Are They So Tricky?

Prepositions are those small words like “to”, “in” or “by” that tell you how different parts of a sentence are related to each other.

The problem is, each language has its own set, and although sometimes there are direct equivalents, often preposition usage varies significantly between languages.

For example, while the French proposition après has the direct English equivalent “after”, the preposition à can be translated by “at”, “in”, “to”, “of”, “by” or others, depending on its function.

Similarly, the English preposition “in” can be translated by dans, à, en, de and more in French.

If you look in almost any grammar book, you’ll find a list of French prepositions in alphabetical order, usually followed by a list of English prepositions for cross-reference.

For this reason, I’m not going to give you another exhaustive list here. Rather, I’m going to focus on some of the most important areas to introduce you to the French prepositions that will be most useful.

After that, mastering the rest will just be a matter of exposure and practice. So let’s jump in and get started!

To say where something is, French preposition à is most frequently used and when used to express location, it can be thought of as meaning “at”.

However, in English, sometimes we would also use “in”.

For example, we say:

Note that when used with masculine nouns, à is combined with le to make au.

However, for plural countries, you use aux regardless of gender:

French Départements And Regions, English Counties, States And Provinces In Other Countries

To talk about French departments and regions, English counties and provinces and states in other countries, use dans:

However, for French regions, the rules are different – use en (with no article) for feminine regions and dans (with an article) for masculine regions:

For islands further away from Europe, the preposition is usually à, regardless of size:

However, this is not always the case. For example, we say:

You could argue that the last two are départements of France, but when it comes to islands, perhaps the best idea is just to remember each one individually.

Sometimes, it is possible to use either à or dans with a subtle difference in meaning. In these cases, choosing à expresses the general idea of the location whereas dans emphasises the fact of being inside the place.

In the first sentence, we’re just stating where the person is – but in the second, we are placing more emphasis that he is inside the school, hiding inside the building.

It works the same when considering French prepositions for cities:

The first sentence is merely stating the location, but in the second, the emphasis is on it being unpleasant to drive within the city. However, if you didn’t want to stress it in this way, you could also say c’est désagréable de conduire à Londres and it would still be correct.

Over, Under, Above, Below And Between

When saying something is over, under, above or below something, French is quite similar to English. The preposition in French for the word “on” is usually sur while above is usually au-dessus de.

As you can see, since the cat is touching the table, we use sur – but because the clouds are not touching the mountain, we use au-dessus de.

With the equivalent words sous and au-dessous de, the difference is more subtle. Here, no contact is implied, and au-dessous de is used when you want to emphasise that something is completely under, underneath or below something, like this:

The word for “between” is entre. However, in other expressions not related to a physical position, entre can be translated with other prepositions in English.

A uniquely French preposition of place is chez, and you usually use it to express “at somebody’s house”, like this:

When talking about TV and radio programmes, the preposition to use is à and not sur. If you use sur, it means there is something on top of the physical TV or radio.

Other Prepositions Of Place

There are also a number of other French prepositions of location that work more or less the same as in English. Here are just a few examples:

French Prepositions Of Movement And Direction

As well as for location, we also use prepositions to indicate movement and direction. Here are some of the most important.

Direction “To” And “From”

In English, the basic preposition we use to indicate direction towards something is “to”, and in French, this is often translated by à. Here are some examples:

You’ll notice that the preposition for “to” in French is the same as the one for “at”. However, the meaning is always clear from the context.

However, when talking about places that use en for location, for example, feminine countries and some islands, you should use en for direction too.

The rule is to always use the same preposition for direction as for place:

For direction “from”, the preposition is de: 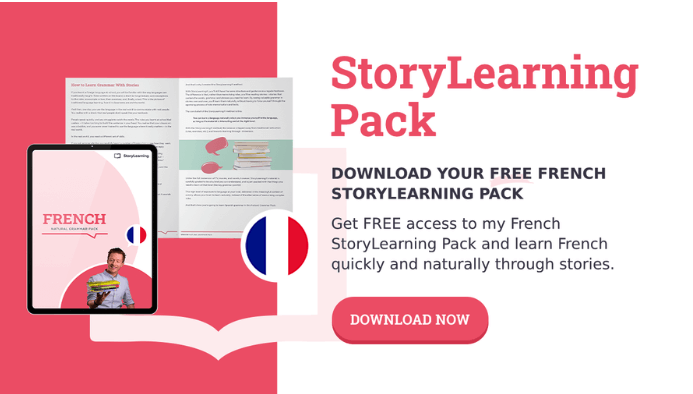 When travelling in a vehicle, the preposition is usually en:

However, with some other ways of travelling, you use à. The difference is that you are not considered to be “inside” a vehicle.

“Through” – Par And à Travers

To express “through”, the preposition is usually par:

However, “through” is sometimes expressed by à travers, which often implies some kind of difficulty or that something is blocking the passage:

Another major category are French prepositions of time, so let’s look at some of the most important ones now.

Saying The Time When Something Happens

To say the time when something happens, you usually use à, which in this case, is the equivalent of “at” in English.

To say which month, season or year something happened, the preposition is en:

An exception is printemps, “spring” – for this, use au:

To say which day something happened, in English, we use the proposition “in”, but in French, you don't need a preposition:

In French, to say that something happens repeatedly on a particular day – for example, “on Mondays”, there is still no preposition, but you precede the day with le, like this:

To say how long an action has lasted, you use depuis – and depending on the sentence, it can be translated with either “for” or “since”, like this:

Note here that to say how long you have been doing something, if you still do it now, you should use the present tense in French and not the French perfect tense.

On the other hand, if you are talking about a completed period in the past – and the focus of the sentence is the duration of the action – the preposition to use is pendant:

However, if the emphasis is on the duration rather than the action, no preposition is required in French whereas English usually uses “for”:

In this example, the emphasis is on how long he stayed, “two weeks”. Compare this with the example before where the action is on the action, “learning the piano”.

An exception is when talking about an intended duration in the future, in which case, you should use pour – although sometimes, in informal French, no preposition is used:

That said, again, if the focus is on the action, you should use pendant, even in the future:

“In” With Time Expressions

To say how long into the future something will happen, in English, we use “in” – and it works the same in French with dans, like this:

However, to say how long something will take, use en. Here’s a pair of examples that illustrate this point clearly:

As you can see, in English, the translation is the same. However, the first sentence tells you that the end date will be two weeks from now while in the second sentence, we are saying how much time it will take him to complete the job.

For the second sentence, an alternative translation could be “it will take him two weeks to finish the job”.

To express “during”, the preposition is pendant:

Avant And Après Meaning “Before” And “After”

When referring to time, these two prepositions work more or less the same as in English:

Vers To Give An Approximate Time

To indicate an approximate time, use vers:

This preposition can also be used to indicate approximate ages:

“Until” Is usually Jusqu’à

To express “until” use the preposition jusqu’à:

However, to express the idea of “not until”, use pas avant – in English, the same idea can also be expressed as “not before”:

French also uses prepositions to express possession, so here’s how it works.

De And à For Possession

The preposition de is usually translated by “of”, and in French, it is used to talk about who something belongs to:

Language learners can sometimes get confused regarding the French prepositions à and de.

However, this can be contrasted with the same construction using à, which tells you about the kind of container you are talking about. Look at this pair of examples:

In the first one, we are talking about a glass filled with beer. It could be any kind of glass – for example, a wine glass – but we are saying that it contains beer.

A Big Topic – But One You Can Easily Master With Practice

Prepositions are a big topic, and it’s impossible to give you a comprehensive French prepositions list of all the possibilities in a short post like this – so I haven’t tried.

Rather, I’ve given you a selection of some of the most common French prepositions and the ones that tend to catch learners out at the beginning.

However, in this post, you have already seen a good proportion of the most awkward examples – and the rest will come with time and practice.