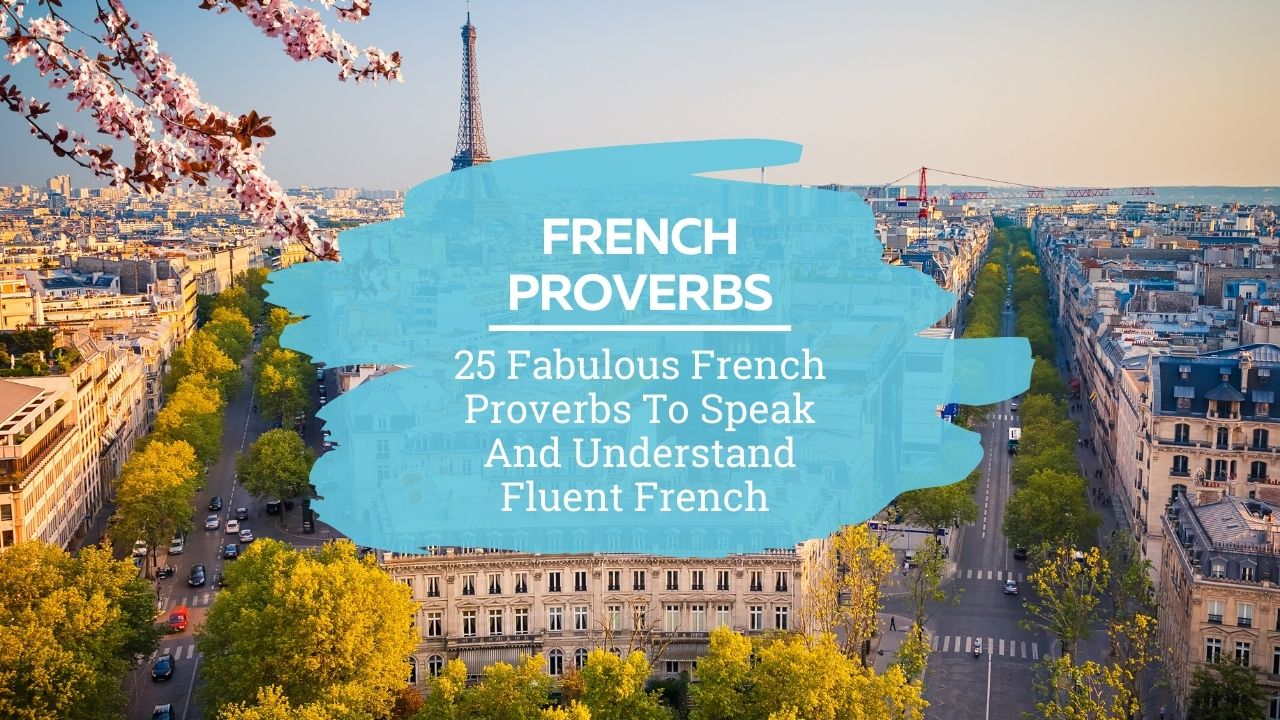 Every language has proverbs, sayings and idioms, and as someone learning French you'll discover that the language is as rich in this area as any other.

As your level of French improves and you have more contact with French native speakers, you will inevitably hear French proverbs being used, so it’s important to understand what they mean.

French has hundreds of proverbs, many of them shared with English, and while you don’t need to learn them all, it’s a good idea to remember some of the more common ones – so here’s a collection of 25 assorted French proverbs to help you get started.

Why Are French Proverbs Important?

Proverbs represent the accumulated wisdom of a people, providing an insight into their customs and beliefs. This means that proverbs can help you gain a deeper understanding of French culture and the French mentality.

Many French proverbs have been around for centuries, and much of the imagery comes from a more rural, agrarian society of bygone times.

They deal with the themes of village or countryside life, often referring to animals like horses, hares and bears, and they are populated by characters like blacksmiths, cobblers and hunters.

This makes French proverbs doubly interesting since they also provide a window into the past, allowing you to peer back into history for a glimpse of the France that gave rise to all these colourful sayings.

So now let’s jump in and have a look at some of the most interesting!

(Note that with the translations, I’ve tried to give more literal versions to retain the flavour of the French, which is why some may seem a little contrived. But of course, more natural translations would also be possible!)

Translation: Little by little, the bird makes its nest

This vivid proverb refers to the values of patience and perseverance, reminding us that even though progress might not be rapid, through dedication to a task, we can achieve our goals.

This is a particularly apt proverb to remember for those learning French or any other language! Also, see #12 below.

English equivalent: Don’t judge a book by its cover

This imagery of this proverb reflects the role Catholicism has played in French history and how it is still an important part of the French consciousness.

It points out that just because somebody is wearing a monk’s habit, he isn’t necessarily a monk, reminding us that appearances can be deceiving.

Another version of this is la barbe ne fait pas le philosophe (the beard doesn’t make the philosopher).

Translation: Who sows the wind reaps the storm

English equivalent: You reap what you sow

The English equivalent of this proverb is quite similar, and the meaning is that eventually you will always have to face the consequences of your actions.

Translation: Better to prevent than to cure

A proverb that needs little explanation and that is also found in many other languages.

This proverb doesn’t have a direct English equivalent. Literally, it advises you to sleep on a problem to try to find a solution – but it could also be taken to mean that you shouldn’t act in haste.

Translation: Who chases two hares at once catches none

This is another proverb with no direct English equivalent, but the meaning is clear: you should concentrate on doing one thing well rather than trying to do many things at once and doing them badly.

This proverb is rich in the imagery of a bygone world since not many of us hunt hares anymore. The advice of this proverb is especially relevant in the modern workplace where we often spend our days multitasking and trying to do everything at once!

Translation: It’s not to an old monkey that one can teach to pull faces

This is a fun version of the familiar English proverb, although it’s unclear why the French version talks about monkeys since they’re not native to France. Perhaps it refers to training monkeys in travelling circuses.

Translation: You have to break the shell to get the almond

English equivalent: You can’t make an omelette without breaking a few eggs

The English version of this seems much more modern, but the French one is very easy to understand.

The meaning of this proverb is that the quality of something depends on its origin and that you can’t make something good from bad ingredients.

This proverb doesn’t have an English equivalent. It seems particularly French since it comes from a nation that’s so proud of its baking!

Translation: Make of a fly an elephant

English equivalent: Make a mountain out of a molehill

Another proverb that needs little explanation. The imagery of both versions is extremely colourful!

Translation: It’s by forging that one becomes a blacksmith

This proverb transports you right back to a medieval French town where the blacksmith was an important member of the local community. Another good one for language learners to remember!

Translation: Rome wasn’t made in a day

This proverb is the same in French as in English, and like #1, it reminds us that great tasks take time and that we need patience to achieve them.

The French also say tout chemin mène à Rome (all paths lead to Rome), which we also have in English. These two proverbs remind us of the enduring place the Roman Empire has in the European consciousness, even so long after its fall.

Translation: It's the straw and the beam

English equivalent: You see the splinter in another's eye but fail to see the beam in your own

The English version of this proverb is not so well-known. It points out people’s ability to see faults in others while not recognising their own.

Translation: It’s wanting to catch hares by beating a drum

English equivalent: Drumming is not the way to catch a hare

Here’s another proverb featuring hares. The English version is not so well known, but it refers to taking the wrong approach to doing something. Interestingly, Chinese also has a similar proverb: “climbing trees to catch fish”.

Translation: You can’t make an ass drink that isn’t thirsty

English equivalent: You can take a horse to water, but you can’t make it drink

The English and French versions of this proverb are similar, and both remind us of a world where transport by horse or donkey was common.

Translation: Better to be alone than in bad company

A proverb that requires little explanation.

Another proverb that is well known in both French and English.

In English, we usually use this expression as an analogy when people flee from a lost cause, abandoning even their friends when they see things are not going to turn out well. However, in French, it is used to refer to this tendency in people.

Translation: You mustn’t put all your eggs in the same basket

English equivalent: Don’t put all your eggs in one basket

This proverb is more or less identical in English and French. The imagery recalls more agricultural times of old.

Translation: For a given horse, one doesn’t look at the teeth

English equivalent: Don’t look a gift horse in the mouth

A proverb shared by English and French telling you to accept gifts without questioning them.

The origin of this proverb is that you tell the age of a horse by examining its teeth – but if someone gives you a horse, you should just accept it and be grateful rather than checking how old it is!

Translation: It’s not the cow that screams the loudest that gives the most milk

English equivalent: It is not the hen who cackles the loudest who hatches the most eggs

This proverb is another one featuring pastoral imagery, although the English version is probably less well-known. It means that people who speak a lot or are boastful are not always the most skilled or best at doing something.

Translation: You must hit the iron while it’s hot

English equivalent: Strike while the iron is hot

Another proverb recalling the imagery of the local blacksmith. As in English, it means that it’s better to act right away to take advantage of an opportunity.

Translation: You mustn’t sell the skin of the bear before having killed it

English equivalent: Don’t count your chickens before they hatch

The meaning of this proverb is similar to the English version, but the rich imagery evokes scenes of huntsmen and bears in French forests or mountains.

Translation: There’s no smoke without fire

This one is the same in French and English.

A proverb that’s similar in English and French, reminding us that even after bad times or disaster, things will always improve.

French Proverbs: Spice Up Your French And Impress Your Friends

French proverbs are a fascinating way to gain a deeper understanding of life in the France of old, and their vivid imagery is a joy.

You don’t need to memorise them all, but remembering a few and sprinkling them into conversation is a great way to improve your French skills while leaving your French friends highly impressed at the same time!

Look out for them as you read stories in French or watch French movies. You'll start picking them up and using them in no time.