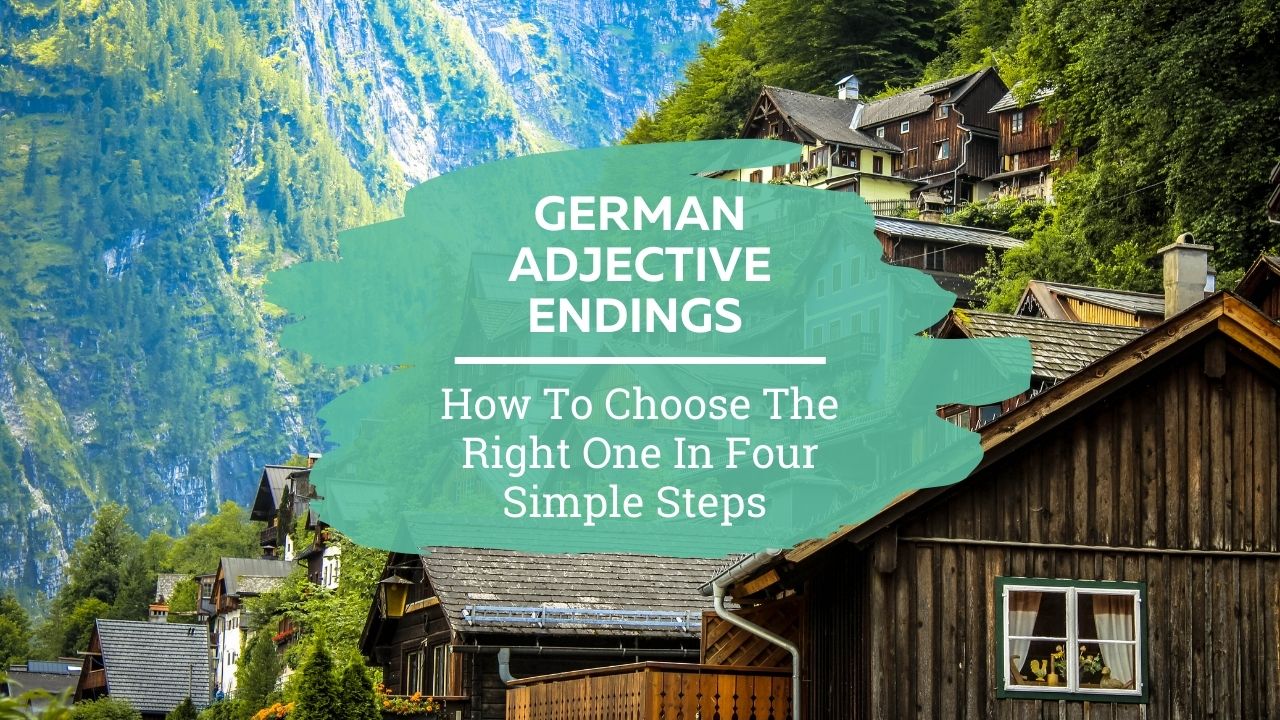 German Adjective Endings: Choose The Right One In 4 Steps

Time to stop tearing your hair out! In this post, I'm breaking down German adjective endings into simple terms that you can understand.

I've also compiled all the information you need to know into one concise table. Finally, I'll show you how to choose the correct adjective ending in four easy steps.

With German Uncovered you’ll use my unique StoryLearning® method to learn German adjective ending and other grammar naturally through stories. It’s as fun as it is effective.

Adjective endings are a strange concept for English native speakers like you and I. However, for Germans, these endings fulfill a very specific purpose.

To understand, I want to show you how the English and German language compare.

Adjective endings don't exist in English, so why do you need them in German?

In English, we use word order to indicate who and what is the subject, direct object, and indirect object.

In German, you can change the order of words around without changing the meaning of a sentence.

Take a look at the same sentences in German:

You might think that each sentence has a different meaning.

However, each sentence means the same thing: “The old woman is giving the young child a large piece of cake.”

In German, adjective endings tell us who or what is the subject, object, and direct object, not the word order.

You might remember that we can determine the role of a noun in a sentence according to the case.

You'll understand better when I break down the sentence from above.

Don't worry about how to choose the right ending yet. After my explanation, you'll have a much easier time understanding the consolidated table at the end.

As you can see, the nouns themselves don't tell you which case they are.

Instead, the adjectives and preceding articles, or determiners, tell you which case you're using.

In German, both determiners and adjectives take endings, also known as declensions or inflections, that indicate the noun's case.

Without these endings, you wouldn't know who was who or what was what.

I know what you're thinking: how will I ever make sense of the German language when the entire meaning of a sentence comes down to a single letter?

I admit, the system will take some getting used to in the beginning.

But, once you grasp the concept, you'll be surprised how much fun it is to change the word order around in German. 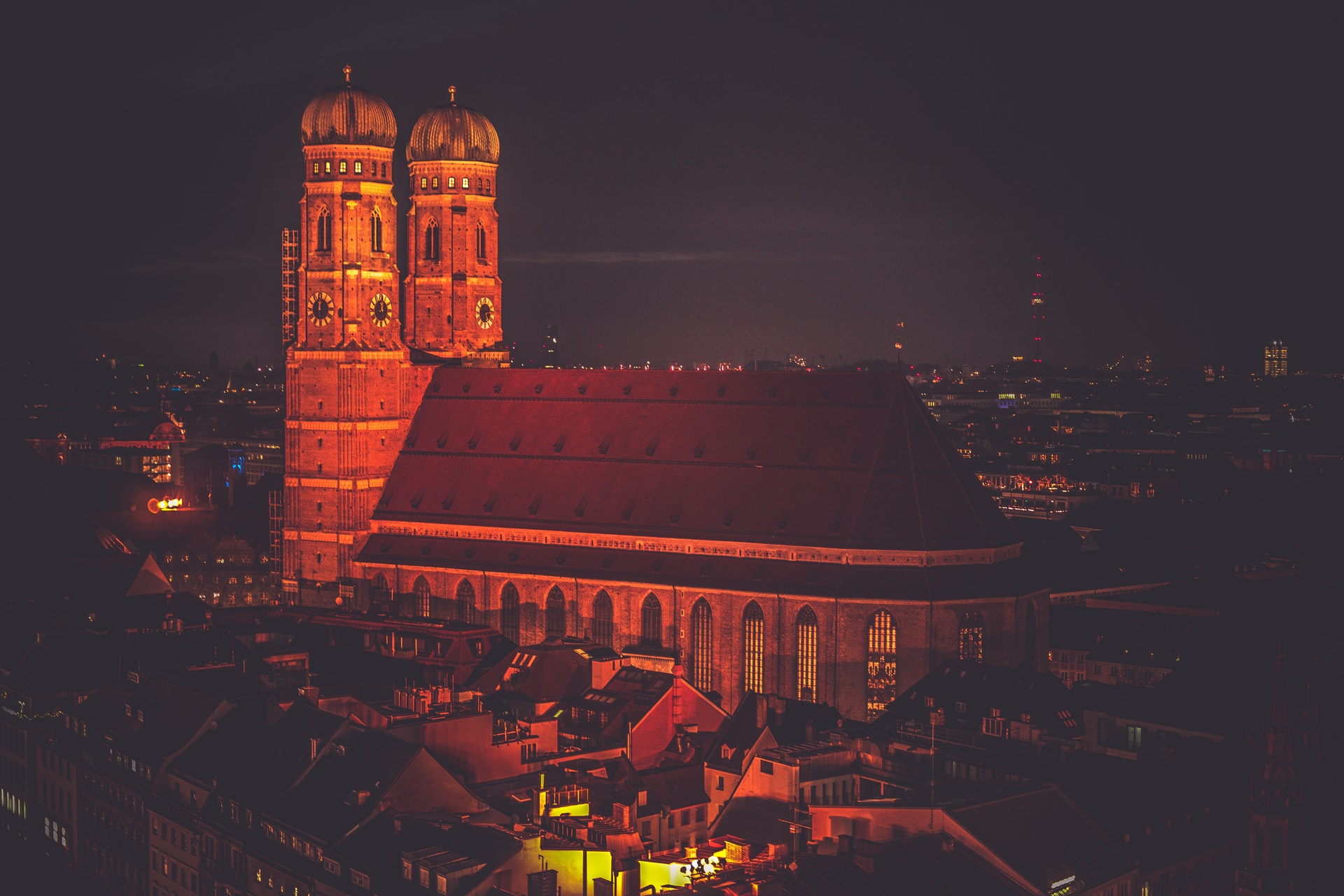 In addition to figuring out the gender, number, and case of a noun, you'll also have to know whether the ending is strong, weak, or mixed.

I know these facts might sound intimidating. But remember, there are only five possible endings altogether: -e, -er, -es, -en, and -em.

The tables below will help you understand how strong, weak, and mixed endings work. However, you don't need to memorize these.

You'll find a single simplified German adjective ending chart at the end of this post to use as a reference guide.

The 3 Categories Of Adjective Endings

Adjective declension refers to the process of selecting an adjective ending that agrees with the noun in gender and case. The first step is to identify if you're following a weak, strong, or mixed declension pattern.

Weak declensions are the simplest because you only have to choose between two endings. Then, you'll be ready to learn about mixed declension patterns, with a total of four different endings. Finally, strong declensions use all five possible endings but will seem more manageable after learning the first two types.

Choose a weak ending after a definite article.

Notice that you only have to choose between an -e or -en ending. Plural, dative, and genitive always have -en endings.

When you use the possessive (genitive) case, add an –s to long (two or more syllables) and –es to short (single-syllable) masculine and neuter nouns.

Let's take a look at some examples so you can see these weak German adjective endings in action:

Here, I have a definite article, das, and a neuter noun, so I need an -e ending.

I need to tell you about a few minor rule exceptions. But, don't worry, the exceptions make sense.

Note that in the dative, possessive, and plural cases, your adjective always takes an –en ending. The feminine nominative and accusative cases both take an –e ending.

Here's an example to make things a bit clearer:

Here, I'm dealing with an indefinite article, ein, and a neuter noun, so I'll take the -es ending.

Let's take a look at some more weak declension so this all starts to sink in a little more:

One trick to remember the mixed article declensions is to compare them to the simpler weak declension table. The declensions are the same for weak and mixed endings except for three. In three cases, you have ein without an ending of its own.

The masculine nominative, neuter nominative, and neuter accusative are the only three with endings different from the weak declensions.

See if you can spot differences and similarities from the previous two declension patterns in the table below.

If you're already familiar with the German cases, you'll recognize that strong endings follow almost the same declension patterns as der, die, and das.

Only the genitive case is different in the masculine and neuter cases. Instead of the expected -es ending, you use an -en ending.

Here, there is no article before the adjective, and I have a neuter noun, so I'll need an -es ending.

Remember that you can either use von + the dative case or the possessive/genitive case, but the adjective endings are different.

Did you see all the similarities between the three tables?

The Only German Adjective Endings Chart You Need

Instead of memorizing several different charts, I've put together a single table that you can use as a reference to determine the correct adjective ending.

Strong and mixed endings are the same for both masculine and neuter words in the nominative or accusative case.

Next, I'll guide you step-by-step on how to choose the correct adjective ending when building a German sentence.

Step 1:  Is the noun masculine, feminine, or neuter?

First, determine the gender of the noun. Let's use the first example sentence again – The old woman is giving the young child a large piece of cake.

In German, “the woman,” or die Frau, is a feminine noun.

Step 2: Is the noun singular or plural?

In the example sentence, there's one woman, so it's singular. Now, I've narrowed down my search for the correct ending to two columns.

Step 3: Are you using a definite (the), indefinite (a), or no article?

This information will help you decide whether to use a strong, weak, or mixed ending. My sentence has a definite article, so I need a weak ending. Now that I have the right column, I still have to choose the correct row.

Step 4: Do you need the nominative, accusative, dative, or genitive case?

Finally, you need to know what case you're using. You may have to identify the subject, direct object, indirect object, and possessive object first.

In my sentence, die Frau, is the subject, so I'll use the nominative case.

Now, I'm left with one column and one row that reveal that I need an -e ending. I can add this ending to any adjective between die and Frau.

You can repeat this process for each noun in your sentence to figure out the right adjective ending.

When you have multiple adjectives, use the same ending for each one – more on that in a second.

Now that you've got the basics down – and yes, I know it all still seems a bit complicated but you'll get there – let's look at a couple of other situations where German adjective declension applies.

The good news is that they're pretty straightforward.

Adjective Declension In The Comparative And Superlative

When you use comparative and superlative adjectives (words like “better” and “best” or “taller” and “tallest”), use the same declension patterns as you would for other adjectives.

Here, you need the ending for plural nouns in the accusative case using the strong declension pattern without an article.

Here, you'll notice a mixed declension pattern and a superlative adjective. In this case, you don't need to add a double –en ending since it already has one.

As I briefly mentioned above, when you have two or more adjectives together in a sentence, use the same ending for each consecutive adjective. Straightforward right?

Let's look at a couple of examples so it's crystal clear. And so that you can get some more German adjective endings practice.

This example doesn't have articles, so you need to use strong declension rules.

Definite articles call for weak declension patterns for the adjectives in this sentence.

Learning German adjective endings requires repetition and practice. So don't give up on your German learning dreams just because of some pesky grammar!

(The Grammar Villain is a dastardly foe, but you can overcome him).

When in doubt, you can always just add an -e. German speakers will still understand you. And eventually, you'll develop a feeling for the right ending.

Adjective declensions are one of the more complicated concepts that you'll learn in German. So don't be discouraged if you can't always identify the gender or case of a noun.

Just keep on immersing yourself daily in German through stories, podcasts, movies or TV shows. It's this daily, regular contact with the language that will help you get familiar with the adjective endings over time.

And that's how you'll start using them the right way when you speak German.