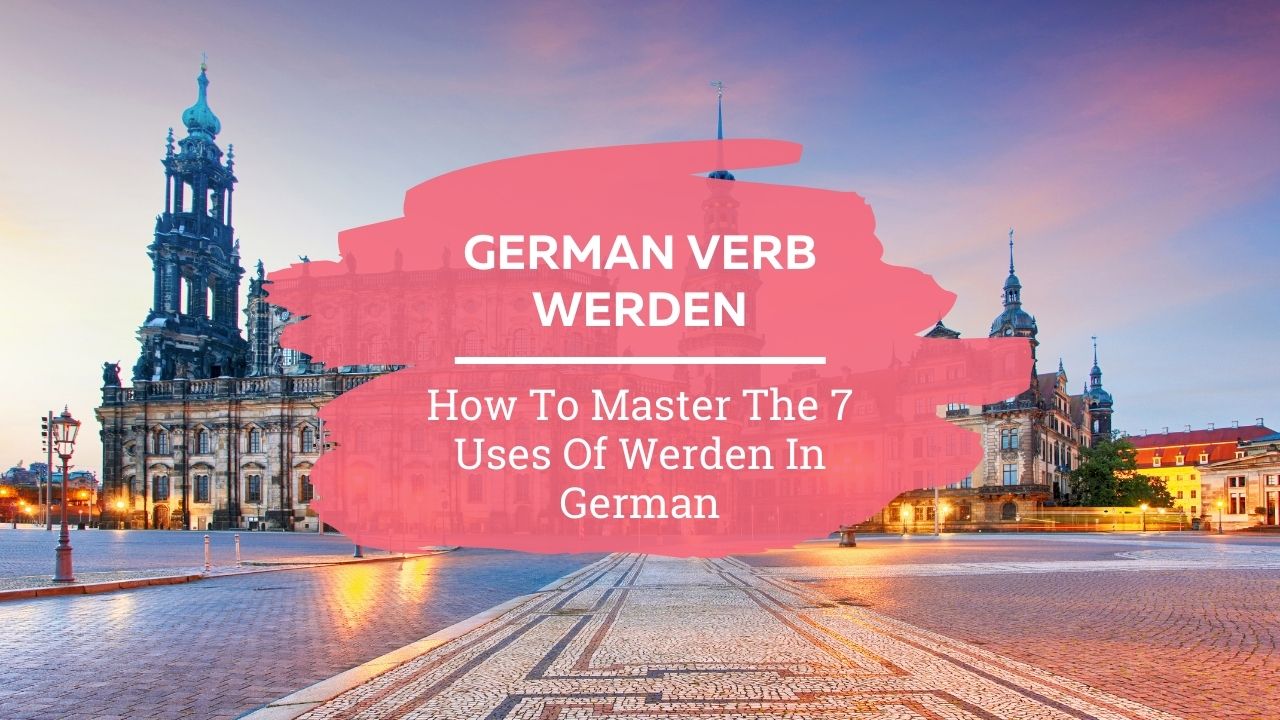 How To Master The 7 Uses Of Werden In German

When you learn German, you quickly come across the German verb werden, which has many different meanings and uses. As an intermediate speaker, you might not be sure how to learn the different usages.

Determining the meaning of werden often requires looking for contextual clues in sentences that can tell you which form is appropriate.

Besides being an irregular auxiliary verb, werden can also be a helping verb, indicate the passive voice, and indicate degrees of certainty.

You can also use werden to talk about the future, express if/then conditions, and give commands.

First, let's look at the various ways to conjugate the word werden. Then, I'll take you through an explanation of each usage variation.

By the way, if you want to learn German fast and have fun, my top recommendation is German Uncovered which teaches you through StoryLearning®.

Werden Conjugation: How To Conjugate The Verb Werden

You'll find all of the various ways to conjugate werden in the Simple Present, Simple Past, Present Perfect, and Subjunctive forms summarized in the reference table below.

Next, let's dive into the different uses for the word werden in German. As we go along, I'll go through each option and its specific meanings.

7 Different Ways To Use Werden In German

Altogether, I'll show you seven unique uses for werden in German. You'll find plenty of examples to help you get the hang of how to use each form.

By the end, you'll know how to distinguish each usage and have a clearer understanding of this common but confusing German verb.

1. When Werden Means “To Become”

One of the most common uses for werden means “to become” or “get” as in, “to turn into something” or “change from one state to another.”

You may be familiar with the German verb bekommen, which sounds like the English “become” but has an entirely different meaning.

When you talk about a process or transition, choose the verb werden. You can also use werden as an auxiliary verb in the past tenses.

Both past tense options essentially have the same meaning.

2. Using Werden To Talk About The Future

Another common way to use the verb werden in German is to talk about the future. Using werden together with the infinitive of another verb, you can say what “is going to” happen.

This form comes in handy when you want to tell others about your upcoming plans.

In both German and English, it's common to imply the future without using werden.

In English, we use the “ing” or gerund form of the verb and drop “will.” Similarly, in German, you can drop werden and conjugate the remaining verbs as usual.

In English, you would typically consider using the passive voice as improper, but you'll see it more frequently in German. Written German and academic texts often contain the passive voice and prefer this form over the active voice.

Use a conjugated form of werden with the present perfect form of the main verb to form the German passive.

You can also form the passive using the simple past tense of the word werden.

You'll see the difference in the rewritten examples from above.

Use the present perfect tense in a similar way.

Both past forms of the passive are very similar, so you can use either one you prefer.

4. The Subjunctive Form Of Werden

Conditional or hypothetical sentence structures also use a form of werden. This form of the verb allows you to express your wishes, what you would like, or what you would do in an if/then circumstance.

You can use this form of werden to give opinions, judgments, possibilities, and potential outcomes.

Typically, you'll use this form the most in spoken and colloquial German. In written German, it's more common to use the subjunctive form of the main verb without würden.

You can use werden to emphasize the certainty of something you're expressing. Seeing one of the signal words below is a clue that the form of werden in the sentence is for emphasis.

If you see or hear words of certainty, then werden is likely there for emphasis and not as a future expression.

Adding werden to your sentences is one way to express degrees of certainty or uncertainty in German.

Using werden in a sentence construction, you can also express a situation that is probable or likely. Although this might sound confusing, these sentences aren't as tricky to spot as you might think.

When you see noch, wohl, doch, schon, or similar words, you're likely dealing with a probability statement. Although these sentences look identical to the future form of werden, you'll interpret the meaning differently.

If a phrase makes more sense when you insert a word meaning “sure,” “likely,” or “probably,” then it's a probability statement and not the future tense.

The final way you might come across the German werden is in commands. Together with an infinitive verb, you can use werden to emphasize your demands.

Using werden sounds stricter than the imperative form, which may be too short to get the attention of others.

Secondly, you'll encounter werden as a way to express sentences in the future tense. Werden also appears frequently in the passive voice, which you'll often use in German. Forms of werden with “ü” (würden) indicate conditional if/then statements.

I hope you had fun learning the different uses for the verb werden and better understand how to use it. Now it's time to go out there and listen to German podcasts, watch German movies and read German books and spot the different uses of werden in context.