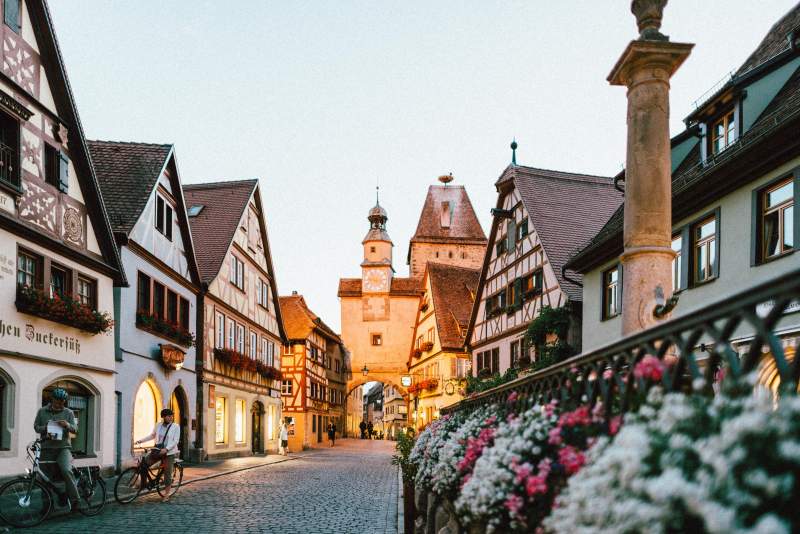 When you're learning German, the grammar, like German past tenses, can be a real headache can't it?

You have to get your head round the different cases. And try to figure out where your supposed to put your verbs.

Speaking of verbs, you've probably noticed that German has 2 past tenses: the simple past (Imperfekt) and the present perfect (Perfekt).

But how do you choose between them? And what about all the irregular verbs? Fear not, that's exactly what I'm going to help you with in this post.

Once you know how to use the German past tenses, you'll be able to to:

After reading this post, you'll know exactly when to use which past tense. So you can avoid those embarrassing moments when your spoken German sounds too formal. Plus you'll be able to form the verbs correctly, even the irregular ones.

If you're determined to master German past tenses and other tricky aspects of German grammar, I recommend German Grammar Hero, my story-based programme that helps you internalise German grammar, speak with authenticity and communicate with freedom!

1. What Is The German Simple Past Tense (Imperfekt)?

The simple past describes a narrative or series of events in the past. In German, you use the simple past in formal situations, so you'll find it mostly in writing or in novels.

The simple past, or Imperfekt, tense typically consists of just one verb.

But, there are three main verbs that you'll hear used in conversation in their simple past forms.

For simplicity, these most-used words are almost always in the simple past tense.

The German simple past often looks very similar to the English version. For example, “Ich spielte Golf.” and “I played Golf” are relatively close.

Next, let's take a look at the rules of conjugation for the Imperfekt tense.

2. Conjugating The Simple Past (Imperfekt) Tense

The simple past tense in German is similar to its English counterpart. Both languages have regular and irregular verbs.

How To Conjugate Regular Verbs In The German Simple Past

How To Conjugate Irregular Verbs In The German Simple Past

But,  just as in English, not all verbs are regular (strong).

Many common German words are irregular (weak), such as:

You've probably noticed that the first three examples are the verbs Germans use in past simple even in conversation.

Let's see what happens to the conjugations of these three most common irregular verbs:

The 3 Most Common Irregular Simple Past Verbs

You might notice that the simple past form is often the same for the singular pronouns,

The pronoun, du, (you) typically has an

With regular exposure to German through listening or reading, the irregular German verbs will start to feel like second nature to you.

3. What Is The German Present Perfect Tense (Perfekt)?

The present perfect, or Perfekt, tense is more common in spoken language than the simple past.

The present perfect form has the same meaning as the simple past. But it's a compound tense.

Although you'll mostly hear the present perfect in spoken German, you can also spot this tense in newspapers, books, and other literature.

Complete Events Vs Events In Progress

For English speakers, it's helpful to note that the present perfect tense only applies to events that are complete and not still in progress.

For example, in English we can say:

However, to say the same sentence in German, we would say:

Since the event is incomplete, we use the present tense in German.

You form the present perfect by combining a helping verb (haben or sein) with a ge- prefix and adding -t or -et suffix to the stem verb.

To conjugate regular verbs in the present perfect, we'll need a helping verb.

Most verbs will take haben as a helping verb. Next, you'll need to add a ge- prefix and -t or -et suffix to the stem. Let's take the word sagen (to say) as an example:

Even though most verbs will take haben (to have) as a helping verb, some verbs take a form of sein (to be).

Verbs that use sein as a helping verb must satisfy these two conditions:

Conjugating strong, or irregular, verbs usually involves adding a -t, -en or -et ending and changing the vowel stem. A helping verb, such as haben or sein, comes before the conjugated verb.

Let's take the word wissen as an example:

A few additional rules will help you conjugate the weak German verbs in the present perfect tense:

Sie hat studiert (she studied) is the present perfect form

Just as in English, German also has around 200 irregular verbs. In addition to getting plenty of German input, you can use patterns and similarities in these verbs to make them easy to learn.

1. The Present Perfect Is The Same As The Infinitive

2. The Simple Past And Present Perfect Forms Are The Same

3. The Present, Simple Past, And Present Perfect All Have Unique Vowel Sounds

When learning German irregular verbs, it helps to know a few tell-tale characteristics.

Strong, or irregular verbs, on the other hand, change their vowel stems in the past tenses.

For example, a verb could change its stem vowel to ä or ö instead of an a or an o. Other words can change stem vowels completely.

Mixed verbs are words that have characteristics of both strong and weak verbs.

The concept may seem confusing at first, but mixed verbs are more straightforward than strong verbs. Another advantage is that there aren't very many of them.

Mixed verbs are typically regular in the present tense. But in the past tense, mixed verbs change vowel stems and add a -t or -te ending, like this.

The best way for you to start learning German irregular verbs is by beginning with the modal and auxiliary verbs.

The modal auxiliaries in German are:

These verbs are some of the most commonly used words that deserve special attention to detail.

As you can see:

But you can make the other irregular verbs easier to learn and remember with music. Die poetischen Verben (The poetic verbs) is a classic song used to help German language students remember those tricky irregular verbs.

And of course, make sure you get plenty of exposure to German to learn those irregular verbs through listening or reading.

How The German Past Tenses Help You Express Yourself

Now that you know the basics about the German past tenses, you'll be able to express yourself in both conversational and written language.

Using the simple past (Imperfekt) and present perfect (Perfekt), will enable you to communicate past events in German. You'll be able to speak about places you've been to, people you've met, and experiences you've had.

Speaking of stories, did you know that they're the best way to learn the grammar of German naturally?

If you like the idea of reading lots of German stories to master the grammar, then German Grammar Hero is for you.

In this programme, instead of pouring over verb tables and memorising grammar rules, you read and immerse yourself in a compelling story.

Now that you've read this post, do you feel more confident about using the German past tenses in speaking and writing? Share your thoughts in the comments below.