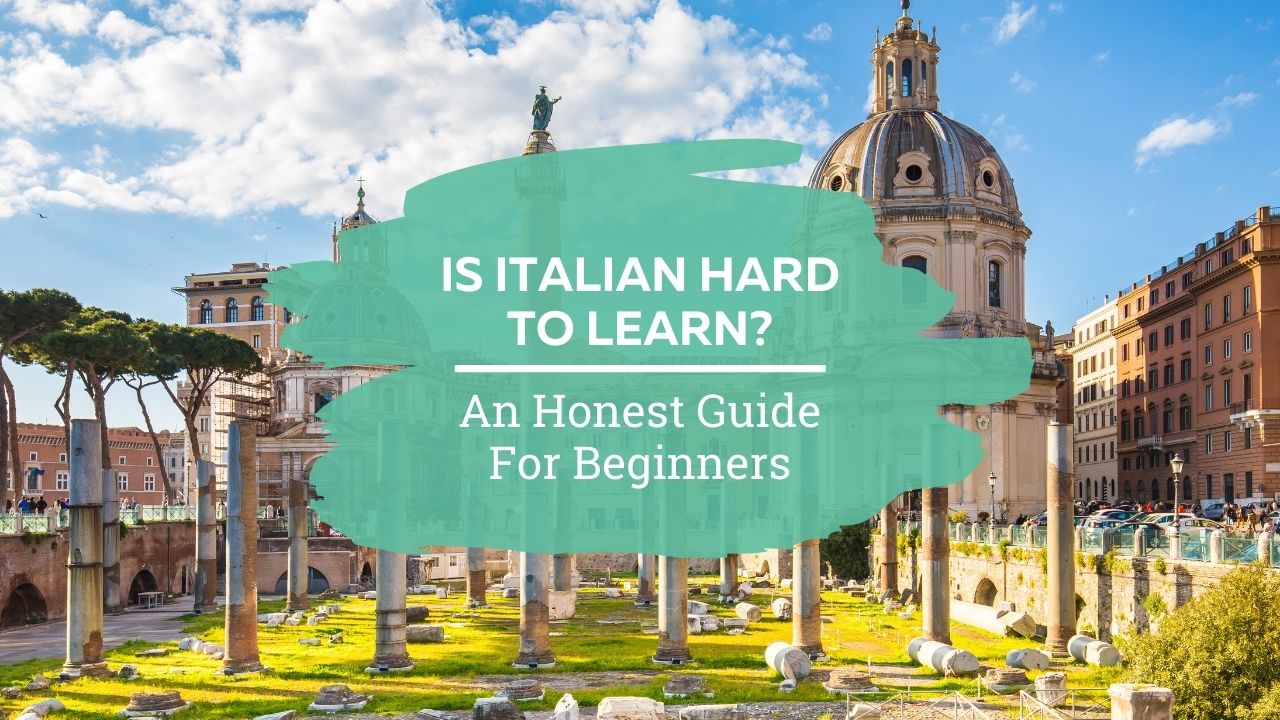 Is Italian Hard To Learn? An Honest Guide For Beginners

There are about 60 million Italian speakers. And the Italian language is among the most fascinating and musical in the world: these are just two of the many reasons to learn Italian right away.

However, I know that you're scared because you've heard that Italian is difficult to learn. But is it really? Let's find out!

First, let's address the elephant in the room. The Italian language is not at all difficult for those who speak English natively. Quite the opposite: it's one of the easiest languages to learn.

This is true because Italian and English share a rich vocabulary of common or very similar words; as soon as you start noticing them, you'll be surprised how many you already know!

Of course, to realize this you have to start, and there is no better way to do it than with my Italian Uncovered course: you will immediately begin discovering the language thanks to my innovative and fun method, saying goodbye to the boredom of learning the rules by heart.

Are you ready to get started? Try my free method now for 7 days and get started on the right foot!

Now back to the post. As you've just seen, if Italian is considered a rather easy language to learn, then why do so many feel discouraged?

Three main factors scare those who want to approach the Italian language:

1. The presence of the male and female gender

2. The number of articles and their combination with prepositions

If this triad is undoubtedly intimidating, learning Italian is much simpler than you might think. Let's see why.

While in English there is no gender in words, the Italian language distinguishes between masculine and feminine. And because of this articles, nouns, and Italian adjectives change accordingly.

Now, this scares anyone who approaches language study for the first time.

First of all: don’t panic, because the presence of genders seems complex but with few rules and a minimum of experience, you'll find yourself using it effortlessly in no time at all.

Luckily, there are basic rules for masculine and feminine that I can summarise for you in a very simple way.

The other rules follow: if each noun has a gender, the adjectives and articles must respect that gender. Leaving aside the articles for a moment, since I'll cover them in another paragraph shortly, for adjectives the rule is the same.

For example, if we say that Martina (feminine noun) is beautiful (bello/a), it will be enough to apply the rule of -a at the end of the word for the adjective, and the sentence will become:

On the contrary, if we talk about Carlo (male name), the sentence will be:

Personal names also often follow this rule. For example, the equivalent of the name Robert is Roberta for the feminine gender and Roberto for the masculine gender.

Easy, right? Sure, until you meet the exceptions.

Italian vocabulary is among the richest in the world and the fact that there are exceptions is no surprise. Among these, there are some that concern the gender of words, in particular their plural.

Therefore, dito (finger), a masculine noun as the final in -o suggests, in the plural becomes dita (fingers), which can be confusing because it ends in -a instead of -i.

The same happens with some very common words, including orecchio (ear – plural: orecchie), uovo (egg – plural: uova) and even with the word uomo, man (plural: uomini).

The fact is that in all languages ​​there are exceptions. And you have to deal with them without being discouraged.

The secret is to start listening, reading stories, and conversing in the language as much as possible. Gradually you'll get used to the genders and soon will discover that you're getting them right without even thinking about it.

Another factor that worries many would-be Italian learners is the number of articles and how they mix with prepositions in Italian.

It seems a lot. But it's simpler than it looks. Let's just go in order.

Let's start with the articles: in Italian, the single and indeterminate English article “the” corresponds to six different articles.

This creates confusion and a bit of frustration in aspiring Italian speakers like you. But never as much as when prepositions also enter the rule, since the latter in Italian merge with the articles.

Let's take the example of the preposition da (from). While in English it's used without variations, in Italian it changes according to the article (and consequently to the name) immediately after:

“From the gym”, therefore, becomes dalla palestra because palestra is female; “from the stadium”, on the other hand, since stadio is male becomes dallo stadio.

This happens in the same way for all articles, and therefore you can study the variations, which in this case are as follows:

This rule works for all prepositions. And for this reason, it's easy to get used to it after some immersion in listening and reading. If you want to know more, you could read this post about Italian articles explained.

Another obstacle that new Italian language learners encounter is that of pronunciation. In Italian, there are some sounds that don't exist in English. And this may discourage you.

In particular, the most feared is the pronunciation of r, which is rolled (although much less than French) but also sounds like gn as in gnocchi, which is pronounced ny as in “canyon”, can be difficult at the first experience.

Another characteristic of Italian pronunciation that confuses native English speakers is that relating to c and g.

In this case, the Italian differs from the English pronunciation in a rather definite way, because both the c and the g have a double pronunciation: soft in some cases (ch, dj), hard in others (k, g).

What you need to remember is that the Italian language relies heavily on melody and rhythm. And therefore the key to learning to speak like a local is to listen to Italian podcasts and conversations and speak with language natives as much as possible.

Check out this post on Italian listening comprehension for more tips.

Is Italian Hard To Learn? Actually, The Opposite Is True

Let’s get it straight: Italian is as difficult to learn as any new language. And to become fluent requires perseverance, commitment, and organization.

However, two main factors make Italian an easy language to learn if you're an English speaker:

1. the cognates, that is the words in common between the two languages;

2. The phonetic and linear pronunciation.

You Already Know The Words, Even If You Don't Realise It

The words in common between different languages ​​are called cognates. They can be identical or just similar words – what they have in common is that they are recognisable between languages.

Since Italian is the closest language to Latin, and Latin has influenced all European languages at their origin, many words have remained similar in the common language of European countries.

This works for English as well, where many words share the root with the Italian ones. A few examples?

Isn't this amazing? There are many other cognates that you surely already know and use without problems. For example, think of all the terms related to music, such as allegro, andante, piano.

Unlike, for example, in French, in Italian, the letters always correspond to the same sounds. And for this reason, they are read as they are written.

This makes it very easy to pronounce words correctly even the first time you encounter them. And avoids the need to study further pronunciation rules apart from the basic ones.

Is Italian Hard To Learn? Not As Tricky As You Might Think

Now that you know that Italian is not a difficult language to learn, all that remains is to choose the right method to do it.

No-one enjoys boring courses based on memorisation. And indeed they are one of the factors that make learning languages hard!

That's why I created my courses to learn Italian effortlessly through the power of stories. There's no easier and more fun way to start learning a new language! It's how I got fluent in Italian in 3 months from home.

To get started, have a look at the Italian Uncovered course: it's perfect for taking your first steps in the language while having fun.

Plus, there's more good news: you can test it right away with a 7-day free trial to experience the StoryLearning® method first-hand.

Trust me, you won't be able to learn languages in another way after!