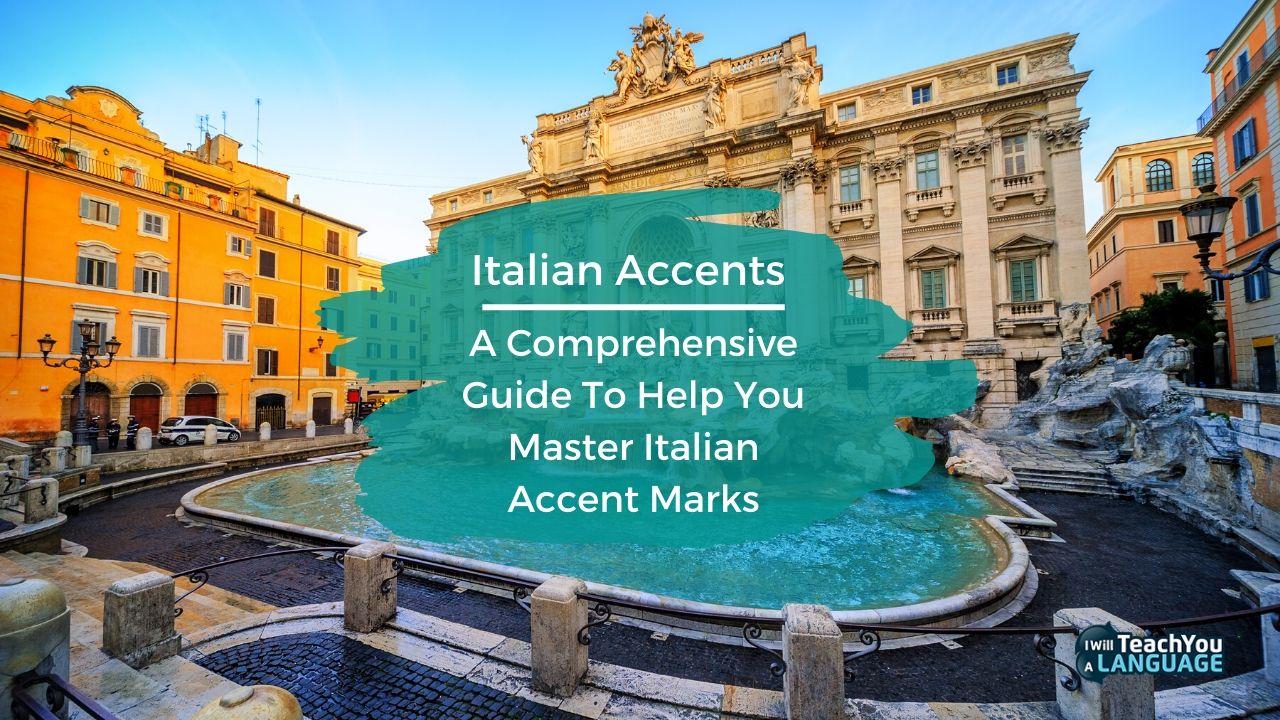 When you're learning Italian and someone says the word “accent” you might think about how you sound when you pronounce it.

Like a colour can accentuate your eyes, an accent can emphasize the changed pronunciation of a letter or syllable. Think of the umlauts — like ä — iconic of the German language. Or the little wave on the Spanish n that makes an n sound into a “nye” sound: ñ.

An accent is a distinct emphasis given to a syllable or word in speech by stress or pitch. So this article is about the accent as a marking on a letter, or the difference in speech it creates, in the Italian language.

In Italian, you call these little things segnaccento, short for segno d’accento (sign/signal of accent), or accento scritto (written accent).

Even if we don’t realize it, we accent every word when we speak. Every word relies on an accent for its pronunciation. In writing, this is a little different: most words do not need an accent because their pronunciation is clear from how it is written.

But sometimes, when it isn’t so obvious, words will have accents to help you in pronouncing them right. In Italian spelling, ortografia, there are two important accent marks:

By the end of this post, you'll know exactly where and when to use accents in Italian. So you can write and speak better Italian.

By the way if you're getting started with the Italian language and want to make progress fast, I recommend Italian Uncovered, my story-based beginner course that will take you to intermediate level through a page-turning tale.

You use the accento acuto on the closed versions of the letters e and o.

Now, you can easily understand open and closed vowels when you look at the mouth. Closed vowels — vocali — are pronounced with the mouth more closed, lips closer together, something like speaking with a smile.

Open vowels are pronounced with the mouth opened wider, like a laugh.

Try saying “hello”, and then saying “free” to notice the difference. In Italian, there are many more cases where you can observe this, since the language is much more dramatic in its speech than English.

Use an accento acuto when:

You'll see more examples of the acute accent below. But let’s see its counterpart first.

The accento grave is put on vowels that are pronounced with no difference whether they are aperte (open), or chiuse, (closed): a, i, u and on the open versions of e and o.

The accent is put on all truncated words with multiple syllables.

There are two other types of accents, the accento circonflesso, or circumflex accent, [ˆ] and the dieresi (diaresis) [¨].

In contemporary Italian, you'll only really come across the acute and grave accents.

The other two are very rare and will in all likelihood never come up in learning Italian. So you can just skip these altogether.

When And How To Use Accenti In Italian

You have to use some accents and it counts as a spelling error if you don’t.

Some are optional, depending on your choice, mostly to avoid confusion, while some should not be used at all.

This means that the two important Italian accent marks can be divided into three categories, just like the buttons on a blazer: always, sometimes, and never.

Let’s look into some of the ways you have to, can, or shouldn’t use an accent in Italian.

Always Use An Accento….

…with all words that have two or more syllables and end with a stressed vowel:

*(and, as mentioned above, written numbers that end on three also require an accent, even if no one is really sure why that is)

…with one-syllable words ending in two vowels, of which the second has a truncated sound: ciò, (that), giù (down), più (more), può (can), etc. Exception to this rule are the words qui and qua, (here and here or hither), which do not require an accent.

Always Use An Accent Continued

Sometimes Use An Accento…

…on the inside of words, even though an accent is never strictly necessary here. It’s recommended to clarify when there are two words spelled the same but with different meanings.

In these cases, it’s up to you to choose if you’d like to use an accent or not. And it also depends on the context, or how confusing the sentence would otherwise be.

The first one means “anchor”, the second means “still” or “again”. Without the context of the other meaning, you wouldn't need to use an accent.

And the more common use (in this case again or still) presumed to be in function. Or the one that makes sense in the context.

One is the plural of sect, or sects, while the other is a number (seven): Ci sono sette sètte nuove (There are seven new sects).

The first example means underwent, suffered or was a victim of, as in ho subìto uno truffa (I was the victim of a scam). And the other means immediately, as in vieni qua subito! (come here immediately/right now!)

i principi non hanno princìpi (the princes have no principles)

Never Use An Accento…

When writing these words:

You shouldn't use apostrophes instead of accents, neither in lower case nor in upper case. It’s È and not E’, è and not e’. But while using apostrophes is technically incorrect, Italians do do it in casual writing, like when texting.

But then, when it comes to texting, you can get by without using accents at all, and that’s fine, too.

Speaking of which; when you’re trying to say “a little”, it’s un po’, not un pò, because po’ is an abbreviation of poco.

How To Write Italian Accents On Your Devices

Great, you’re thinking, I know all about accents now. But how do I find them on the keyboards of my devices?

On a windows computer, you have two options. One is to add Italian to your keyboard, which seems easy enough. And the other is to remember a four-digit code for each accented letter, which does not.

If you do choose to go with this technique, you can find an Italian language character chart with the corresponding numbers online.

As for phones, some of them should have these accents over “e” and “a” on a standard English keyboard as well (these open when you tap and hold the letter).

If not, you can set your keyboard to switch between English and Italian. I recommend this option because you’ll be writing a lot of Italian in the future. And because autocorrect can help you if you need it to.

Or, do as the Italians do it and use apostrophes, knowing that this is wrong, va bene così.

Italian Accents: Your Next Steps

So there you have it. A comprehensive guide to mastering the use of Italian accents when you write. This way, you can avoid any potential spelling errors and confusion between words than differ only because of the accent mark.

Now you might be wondering well, what next? Knowing the rules is all well and good, but how do you actually apply them?

Well, you know me. I'm a big fan of reading stories in order to immerse myself in a language. In fact, using immersion was how I learned Italian in 3-months from home, while avoiding grammar books and text books.

So what you can do next is immerse yourself in written Italian so you can see the rules you've just learned about accents in action. Check out these 7 Italian books that are perfect for Italian learners like you.

Not only will reading let you see the Italian accents in action, but also you'll enrich your vocabulary and reinforce your grammar knowledge. Plus, as your main goal is reading and enjoying the story, you won't feel like you're studying.

That's because you're immersing yourself in the language, not doing endless grammar exercises, like the grammar villain wants you to!