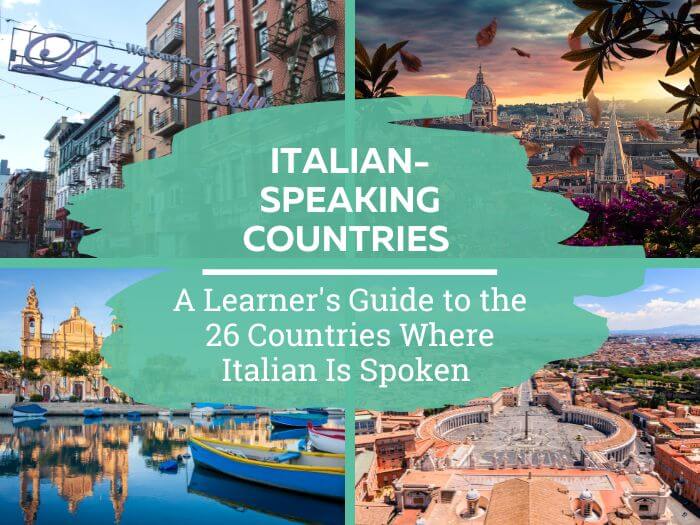 As you start learning Italian, you might notice that you get interested not only in the Italian language, but also in topics related to its culture and history, such as Italian speaking countries.

Sooner or later, every curious language learner catches the bug of seeking (often impractical) knowledge. Since you are reading this article, you’ve probably already caught it and you're in for a few surprises.

Italian is a hugely popular language that comes in fourth place as the most studied language in the world, surpassed only by English, Spanish and Chinese.

According to recent statistics, Italian is also the 22nd most-spoken language in the world.

But where is Italian currently spoken in the world, and why? In this post, you'll discover how and where Italian is spoken all over the globe! Buckle up for an incredible journey.

With Italian Uncovered you’ll use my unique StoryLearning® method to learn Italian naturally through story… not rules. It’s as fun as it is effective.

Italian Around The World

Imagine you are at a local cafe with an Italian friend.

Next to you is a large table that is quickly populated by people from various countries. You can’t immediately tell which country each person is from.

If you could, you’d know they come from Albania, Switzerland, Argentina, Somalia, Libya, Australia, Venezuela, Slovenia, and Malta.

Intrigued by this UN-like gathering, you try to listen in to their conversation. It’s not difficult; they are beside you and speaking animatedly, but you can’t quite figure out what they are saying.

A glance at your friend shows you that she is first surprised, then amused.

As a reply, your friend, as a true Italian, stands up and goes to join the other table.

She is answered with warm welcomes and cheers.

‘Certo certo, siediti!’ (Sure, of course, have a seat!), comes the reply, also in accented Italian.

Eventually, you join the table too; that’s when you discover their nationalities and the fascinating story of how a group of Italian speakers of various nationalities came to meet at your local cafe.

The Origins And Evolution Of Italian

Before we speak about the diffusion of the Italian language around the world, let’s touch on its origins and evolution in Italy.

Italian is an Indo-European language and falls under the branch of the Romance languages. It’s the closest language to Latin; specifically, it’s a product of Latin and the vulgar (common) Tuscan dialect. Find out more about Italian dialects.

This dialect was taken into consideration as a literary language only by the end of the Middle Ages, when eventually its use replaced that of standard Latin in court and among the educated elite.

Subsequently, it was three writers that most helped this spoken dialect gain more relevance and popularity. First it was at the hands of Dante Alighieri, then Pietro Bembo and finally thanks to Alessandro Manzoni, who helped promote spoken Italian by using it in his famous novel, I Promessi Sposi (The Betrothed).

Check out this post on Italian language history for more on its origins and development.

In Italy, about 59 million people speak Italian as their mother tongue. Additionally, there are about 4 million students or resident immigrants who, for study, culture, work or even passion, find themselves studying the language.

Currently, Italian is 22nd among the most spoken languages in the world, with an estimated 85 million people worldwide who speak it and have Italian origins.

According to the Italian Ministry of Foreign Affairs, Italian is the fourth most studied language in the world, immediately after English, Spanish and Chinese.

But why is Italian among the most studied languages?

Italian is not a particularly easy language to learn. It’s also not an essential business language such as English, Spanish or Mandarin.

How come, then, that there is such an interest in studying Italian? The answer can be split into two main themes: emigration and culture.

Unlike English, Spanish and French, the reason for the presence of large communities speaking Italian outside Italy is not so much because of colonisation as much as it is due to emigration.

Italians were slow to settle in new continents. Still, once they emigrated, they brought with them the art of labour, the way of life and a considerable cultural baggage, which they subsequently spread.

Many people of Italian descent are eager to learn the language to reconnect with their culture and heritage.

It might start because of a fascination for Italian music, cuisine, art, architecture, cinema or fashion and eventually become a passion for all that is Italian, including the language.

The Italian language is reported to be spoken in a record 26 countries in the world. It's the official language of the Vatican City, San Marino and Switzerland. It's also considered the second or third foreign language spoken in Corsica, Monaco and Albania.

Communities of Italians and Italian speakers can be found all around the Italian borders and further along. France, Austria, Slovenia, Croatia and Greece are some territories where modest communities of Italian origins have resided for decades, if not centuries.

Moving to the south of Italy, we find Malta. The Maltese archipelago is also one of the states influenced by the Italian language, although the latter was almost eliminated from Malta’s linguistic repertoire due to politics.

Today, Italian is a sort of dialect in Malta. About 66% of Maltese are able to speak Italian at some level and a small percentage choose it as an alternative to the first two official languages, English and Maltese.

Not far from Malta, to the south, Italian took hold as well, for some time. Around 1882, the former Kingdom of Italy took hold of Eritrea as one of its colonies. In addition to Eritrea, Italian colonies were founded in Ethiopia, Libya and Italian Somalia.

To date, the Italian occupation has left traces in the local languages. In Asmara, Eritrea, there are several Italian schools and Libya once had a large Italian population.

Nowadays, Italian is present in the north African region largely due to substantial commercial exchange with Italy and, in a smaller amount, due to the presence of a community of colonizers’ descendants.

Italian Beyond The Ocean

For hundreds of years, Italian culture has been a recognisable part of the American scene due to the mass emigration of Italians to the new continent.

The great Italian emigration can be grouped into three main periods:

In the first two periods alone, it is estimated that almost 19 million Italians left their country to never return.

According to recent surveys, there are 15 million people in the U.S. who identify themselves as Italo-Americans.

However, only about 1 million people report that they use Italian at home. In recent decades, Italian has been counted as the 5th to 7th most studied language in the United States.

Although there is a sizable community of Italian speakers in Canada, it is arguably in Central and South America that the Italian presence is most rooted.

Argentina, for example, has a population of about 1.1 million Italian speakers. Already at the beginning of the seventeenth century, roughly fifty Italians had settled in Buenos Aires. Many of them were fishermen, accountants or navigators who sailed from Venice and Genoa.

Venezuela is where we find the second largest population of Italian speakers with about 200,000 people. Brazil follows suit with a count of 40,000 speakers.

Estimating how many Italian speakers are in Central and South America, can be tricky though, as small groups and communities can be found throughout the continent, from Panama to Chile.

Italian Speaking Countries On The Other Side Of The World

The first Italian to set foot on the Australian coasts is thought to have been a Genoese sailor named Mario Sega, who made the journey in 1616. And even now, there's a substantial concentration of Italians in Victoria and South Australia.

It's estimated that over 300,000 people speak Italian down under. However, as in many other communities, children of immigrants end up speaking their parents’ dialect interspersed with words from the local language, so in this case we’d have an Italo-Australian dialect.

So, is the standard Italian language going to be lost in Australia? Not necessarily.

Since the 1970s, Australian schools have introduced the Italian language to the curriculum, and it was a hit! Italian is the second most popular language to study in Australia, right after Japanese.

Italian is a curious language. Its roots are firmly in the past, profoundly connected to Latin and the history of the Roman empire, and yet its seed can be found on both sides of the globe.

You can find small and large Italian-speaking communities in about 26 countries, and who knows, maybe one day you’ll end up in a small multi-ethnic circle that speaks Italian!

If you want to make that happen, by learning Italian, then the best place to start is with stories. When you learn with the StoryLearning® method, you pick up Italian naturally by reading, not learning grammar rules. So grab a pile of Italian books for beginners and get reading!