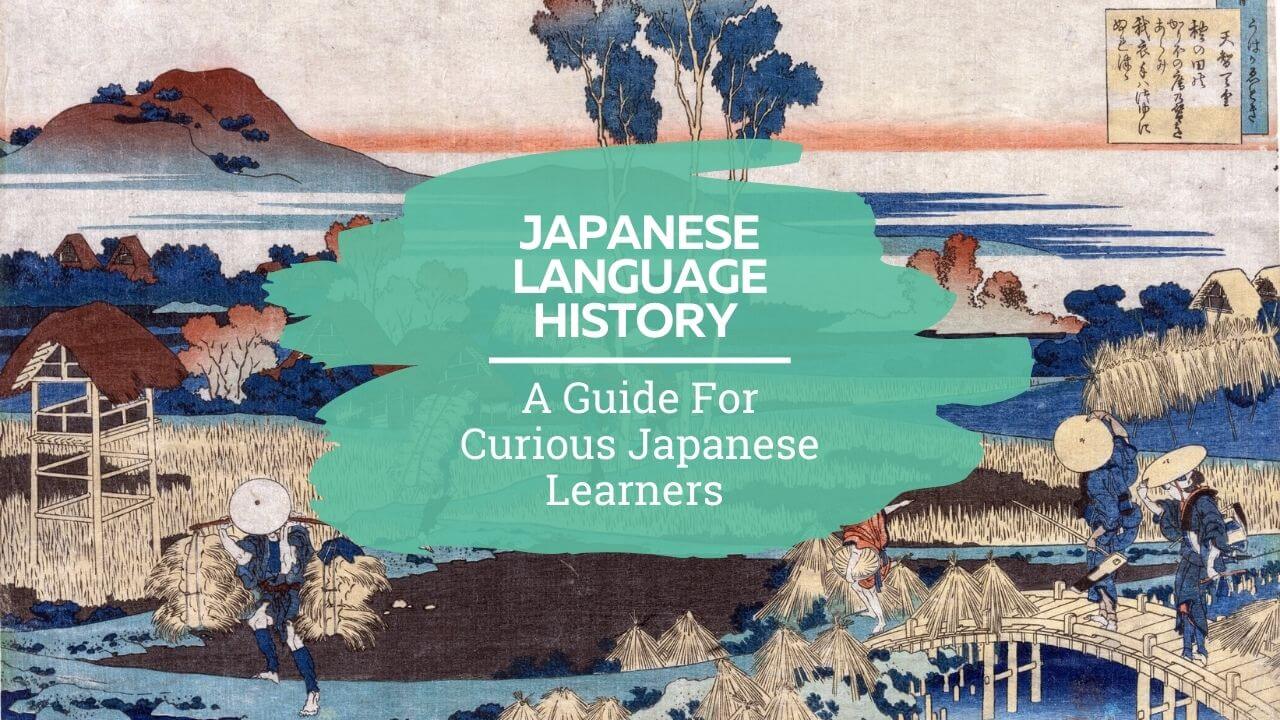 Whether you’ve spent some time learning Japanese already or you’re just getting started on your language journey, it can be fun—and helpful—to discover Japanese language history.

The Japanese language that we know and love today has gone through quite a lengthy period of growth. And some of its oldest origins and influences remain relevant in the Japanese of today.

Understanding more about where Japanese came from can scratch that curiosity itch. And also help you get a firmer grasp on why things in the Japanese language happen the way they do.

This is it—the very beginning of Japanese language history. The truth is that scholars are not entirely sure exactly when Japanese was born or how.

The current assumption is that settlers migrating from the Korean peninsula entered Japan sometime around the 4th century BCE (the Yayoi period). Japan already had some people living in it at this time—the Jomon—who had been cultivating the area since as far back as 14,000 BCE.

When the new Korean settlers filtered in, these Jomon people found their language quickly replaced with this new variant. (However, vestiges of the old Jomon language are still detectable in the modern Ainu language, which some of the older population of northern Hokkaido still speak! It’s not gone for good.)

However, there was no Japanese writing at this time. This means that any information we have about the Japanese language in this pre-standard Japanese time (called the Proto-Japonic era) is determined based on deductions comparing later Japanese with other dialects, like Ryukyuan.

Some transit between the Japanese islands and the mainland of Asia had been occurring for a number of years at this point.

When Buddhism finally found its way over from its roots to the inhabitants of Japan, with it came a variety of texts describing the religion. These texts were in Chinese, which was new to Japanese speakers.

However, over time, the Japanese people began to assimilate Chinese written language and modify it to their own tastes. This resulted in the creation of Man'yōgana. This is an old system of writing that breaks the sound of Japanese into 88 unique syllables.

Some nuance was lost during this time. Apparently mo, for example, used to have two very similar forms, whereas now there is only one. The set of unique syllables used to craft Japanese language would continue to shrink over time, and hiragana was born.

By early middle Japanese, the language’s syllabary had decreased to 67. This era marked the Heian period in Japanese history—a time when Buddhism was thriving and spreading all across the country.

Many regard The Heian period as the golden age of intellectualism in Japan. Philosophy, religion, and literature burgeoned in ways never before seen in the region. It was during this time that Japanese culture began to emerge as its own separate entity from its early Chinese influence. And a sort of national identity arose.

With all of these developments, people were in greater need of a writing and speaking system that fully represented their language. Phonological developments abounded, changing how Japanese sounded into something more akin to what it is today.

The language began to explicitly note long sounds—like ou vs. o or the hesitation present in double-n words like minna. And the pattern of speech changed. The timing of sounds morphed during early middle Japanese into what is known as a mora-timed language.

Mora timing refers to how long a syllable takes to say. In a mora-timed language like Japanese, each syllable lasts exactly the same amount of time. The n in minna will take twice as long to say as the n in mina. Because each part of the word is mora timed. This creates the very predictable lilt of Japanese.

By the early 1200s, Japanese had undergone substantial change already. But more was yet to come.

The Kamakura and Muromachi periods both occurred during this time. And the Japanese language is also broken into segments accordingly. Sounds began to merge, creating more of what we know today.

This includes streamlining sounds like je and ye to be consistent, as well as introducing conjugations. The -te form appears here for the first time, creating conjugations like nonde instead of nomide. So you have late middle Japanese to blame for your need to learn -te form verbs!

Perhaps most interesting in this time period is the influence of outside languages. While Chinese had always been an ever present force in the development of the Japanese language, Franciscan and Jesuit missionaries had now begun to make their way into the country as well, bringing their own languages with them.

This resulted in the first instances of Japanese accepting loan words. Portuguese was a common early influence, contributing words such as pan for bread and tabako for tobacco (or, nowadays, cigarettes).

The many katakana words that you use as part of your everyday life got their foot in the door during the Kamakura and Muromachi periods of Japanese language development.

The Edo period was the benchmark that started what many consider to be modern Japanese.

if you're familiar with Japanese history, you may already be able to identify the Edo period as one of the most significant in the development of the country. It immediately followed the Sengoku (warring states) period, in which the entire country was embroiled in conflict among shoguns seeking to claim the title of leader.

Once Tokugawa Ieyasu claimed victory, Japan experienced an unprecedented era of peace in the Edo period. This time, spent focusing on individual and communal development rather than conflict, encouraged the growth of education and knowledge. And with it, language.

Previously, the Kansai region had been the most active among the various locales within Japan. And so Kansai dialect Japanese was considered the standard.

However, once the Tokugawa family moved the capital from Kyoto (in Kansai) to Edo (modern day Tokyo), the dialect of the Edo area became the norm across the country. You can still see this today, where the Tokyo dialect is used for mass media such as news broadcasts and textbooks.

Part of the stability achieved both politically and economically in Japan during the Edo period occurred due to its isolationist practices. It did not engage with the outside world. And in fact, the shogunate had a special word just for this approach: sakoku, or “closed country.”

The End Of Edo

Once this period ended in 1853 with the arrival of Matthew Perry in his warships, the Japanese language once again erupted with change. Loan words flooded in like never before, standardizing systems such as katakana to support them.

The period after 1945 has been especially fruitful thanks to the development of technology, contributing a large number of loan words specifically in this sector.

While English loan words are the most common (think teburu and konpyuta), Japanese has been exceptionally open to words from a huge number of languages ranging from French to Malaysian.

Japanese Continues To Change Every Day!

Make no mistake—while Japanese has come a long way from its roots, it is far from done changing. Japanese, like all other languages, continues to change every day according to the needs of the people who speak it. And the wide variety of new words that are always being created.

Even ten or twenty years ago, concepts like the niwaka fan (a rugby fan with enthusiasm that comes completely out of nowhere specifically because of the World Cup) did not exist.

This is good news, because it means that as you learn Japanese, you will continually encounter new and fresh ways to express your ideas. It also means that you yourself can grow alongside the language. And the best way to do that is by integrating yourself as much as possible.

Find real people to speak with, real Japanese books to read, and movies in Japanese to watch. Join clubs and take your learning outside of the classroom or textbook. The materials that you learn from are very important. But they will always be more stale than the living and breathing speakers of the language.

And don’t forget—learning does not have to be chore. Approach Japanese (or any other language) with consistency and at a pace that works for you. This will help you to achieve your goals over the long term rather than burning out early.

You can also use a fun and effective method such as StoryLearning®, to learn through stories rather than grammar. It's the perfect way to immerse yourself in the Japanese language.

Get out there and learn. And while you’re at it, enjoy watching the myriad ways that the Japanese language continues to change and grow.