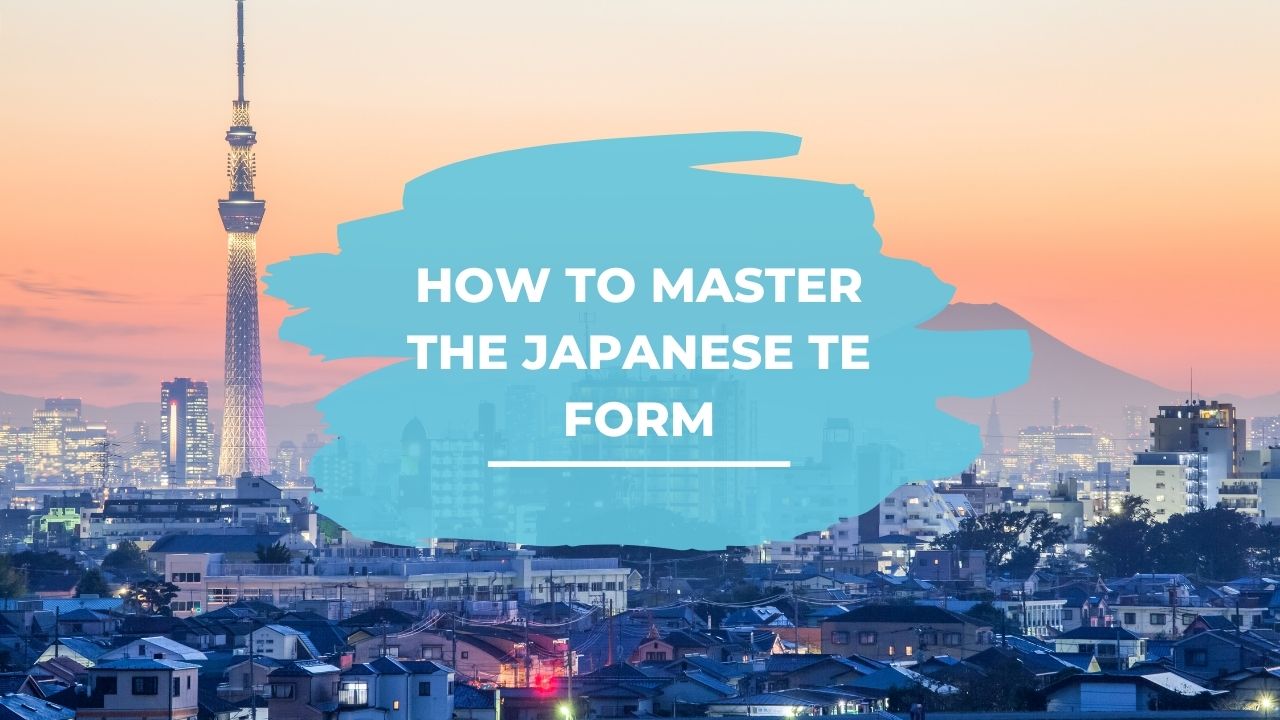 How To Master The Japanese Te Form

Whether you have just begun learning Japanese or are already in the midst of your education, you have likely already encountered the Japanese te form—even if you didn’t realise it at the time!

The te form underpins a lot of what makes Japanese work, and it is a versatile and relatively simple piece of grammar. That’s why it’s a good idea for you to become familiar with the te form early on. You will see it time and time again as you progress through Japanese grammar!

The te form is easy to spot—just look for words that end in -te! You’ll most often find them wedged into the middle of a sentence, because they join ideas. You might also often see it amid a conjugated verb, because te form is used to communicate the idea of a continuous action.

But just to get started, first you should focus on how to create the te form. After you have a grasp of the rules, you can begin to practice its many uses and expand your Japanese speaking, writing, and reading ability!

How To Make The Te Form

As with many types of conjugation in Japanese, the te form is made in different ways depending upon which kind of verb you are using. As a refresher, Japanese is made up of two types of verbs: u verbs and ru verbs. Ru verbs tend to be easier to work with, so let’s start with those as we begin.

When you think of ru verbs, you can think of them as words with “ru” on the end. Ru is a piece. And in order to make the te form, you need to chop that ru off and put te there instead. This is simple with ru verbs, because ru is a separate piece. Just pop it off and there you go.

U verbs are a bit trickier, because unlike the ru in a ru verb, the u is not necessarily a piece all by itself. It’s part of other pieces (like ku, or mu, or tsu). That means you need to consider the entire ending of a word in order to understand how to convert it to the te form if you are working with a u verb.

U verbs will change to te in different ways depending upon their ending, like so:

Unfortunately, there is not much you can do to speed up the process of conjugating u verbs than simply to memorize how each ending responds to the te form. Remember too that just because a word ends in ru does not mean it’s a ru verb! Some words that end in ru are actually u verbs in disguise. Because they’re just sneaky like that.

As with most types of verb conjugation, Japanese also has a few exceptions. In the case of te form conjugation, three of the most common verbs have unique te forms. You should memorize these as separate words instead of trying to figure out how to conjugate their base forms to the te form.

How To Use The Te Form

So why does it matter that we can conjugate a verb into the te form? Actually the te form serves a number of purposes in Japanese.

You can see this, for example, in phrases like “I’m eating lunch” or “it’s snowing.” This describes a current and ongoing state; that is the progressive form.

In order to create the progressive form in Japanese, the first thing you will need to do is convert your verb to te. After that, you can add iru (or imasu, if you’re being formal) or inai (imasen) for negative. So to begin, let’s take a simple verb and convert to te form.

Next, add the iru onto the end of the te form.

You have created a progressive verb! In fact, this word alone serves as a sentence all by itself that means, “I’m eating.” Let’s try this out with a couple more verbs.

Let’s try one more with an irregular verb like suru (to do).

As you can see, you have a much larger and broader opportunity for describing what is happening to you and around you if you can master the te form.

And the good news is that progressive verbs aren’t the only function that the te form can perform.

How To Join Ideas In A Sentence With The Te Form

The te form in Japanese is also a great way to join ideas in a sentence, and it can really level up your Japanese by transitioning you from speaking in short, stilted sentences and into speaking in longer narratives. It may seem daunting, but it’s simple!

First, think about the two sentences that you want to join. Let’s say:

In English, you’d be more likely to join these ideas together into a single sentence that probably sounds something like:

While there are a number of ways to link these ideas in Japanese, one of the most effective and simplest is to choose the te form. Create your first sentence, and conjugate its ending verb into the te form. In the case of this example, that would be:

Note that even though the brushing happened in the past tense, you should change your verb to the te form. Your first sentence will always behave like this; it will lose any past notation and will simply switch to te. Next, add a comma, and then insert your second sentence:

In this way, you can join Japanese sentences so that your speech or writing becomes less stilted. Change the first sentence’s verb to the te form, and the proceed with your second sentence.

This second sentence can have the formal -masu form (or -masen, or even past tense -mashita and -masen deshita!), the informal form (taberu/tabenai and so on), and if your sentence makes sense that way, it can even end in other verb forms (like the te form!).

The te form is a versatile and useful piece of Japanese grammar, and this discussion of its functions has only scratched the surface of all the roles that it plays in Japanese.

It is a great place to begin expanding upon what you already know about the language, and you will see significant changes in your Japanese use if you can start including it in your sentences.

But remember, the best way to improve your Japanese isn’t to add grammar—it’s to immerse yourself in the language. Speak with native speakers if you can, and be sure not to neglect listening and writing.

Pen pals and Japanese TV shows are all great options, and they will help you produce native, fluent Japanese sooner than you might think!

And of course, make sure you read in Japanese. Immersing yourself in story is at the heart of the StoryLearning® method, for good reason – it's both fun and effective.