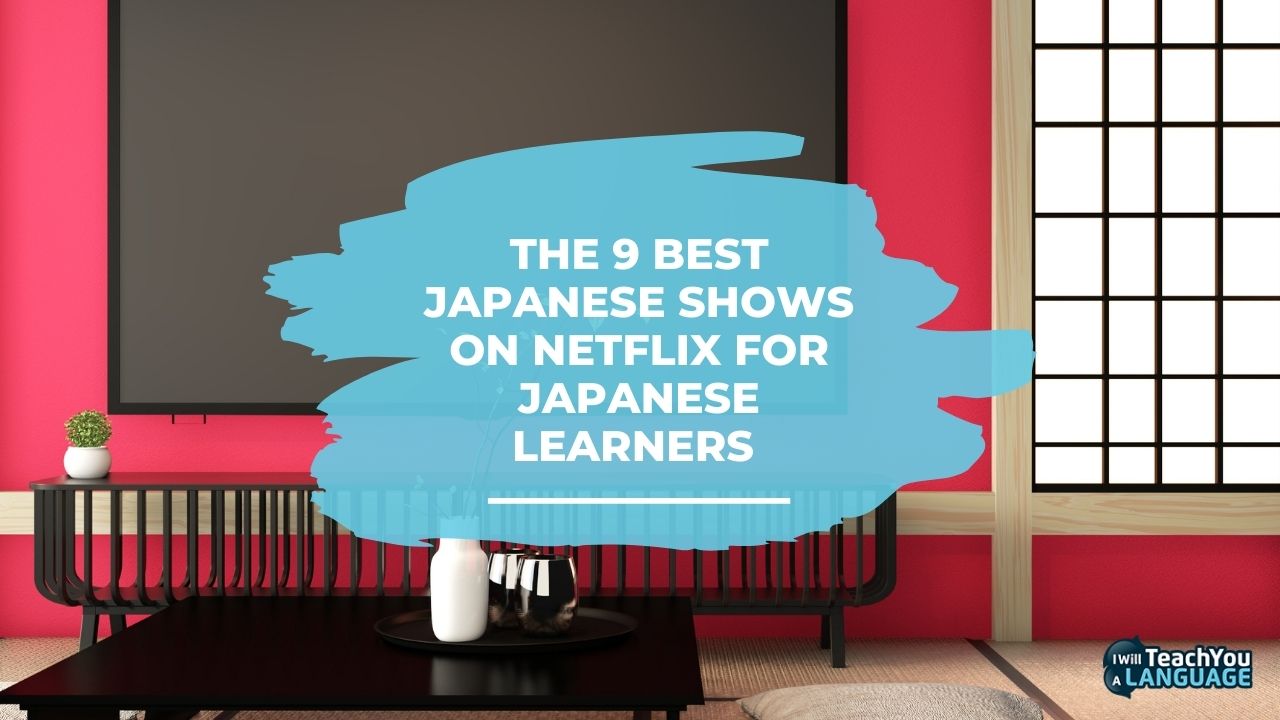 The 9 Best Japanese Shows On Netflix For Japanese Learners

As you learn Japanese, you’ll likely encounter one particular problem. There just aren’t enough native Japanese speakers to listen to!

If you’re like the majority of learners, you’re not located in Japan. Even if you’re lucky enough to have a Japanese community in your area, you’re probably not interacting with them daily.

That means that your listening skills aren’t going to be as sharp as, say, your writing abilities, which you can practice on your own.

Cue Netflix, the international powerhouse that can bring native Japanese speakers to you! Netflix is full of Japanese-language shows with subtitles in many languages, including English, so you can take your pick of shows that interest you.

In this post, you'll discover 9 of the best Japanese shows on Netflix, specially chosen with language learners in mind. Time to learn Japanese through TV!

Japanese Shows On Netflix For Learners

You might find that you click into a show and…boy, you just really can’t understand a word they’re saying.

This can happen for a variety of reasons, from the show’s topic or tone being overly serious or advanced (like the famous but difficult Death Note) to the cast hailing from a specific area of Japan that uses a non-textbook dialect like Kansai-ben.

Thankfully, there are still a ton of great shows to choose from. If you’re looking to practice those Japanese listening skills, check out these options and pick one that aligns with your own personal interests.

If you like anime, there’s plenty to choose from. But if you’d rather stick to real-life actors, Netflix has you covered there too!

Your immediate instinct when you’re thinking about which anime to watch might magnetize you toward something like Naruto or One Piece.

However, when it comes to learning Japanese, these iconic staples of anime aren’t actually a top choice. They’re full of series-specific or fantasy words that have no meaning in real life.  And many of the characters rely on slang or eccentric linguistic choices that don’t actually reflect something that real people would say.

Enter Aggretsuko, a TV series about office life. It follows Retsuko, a red panda who works as an accountant. She’s trying to move up in the world. But she often faces challenges like obnoxious coworkers and annoyingly sexist policies. So she takes her aggression out at the local karaoke bar through death metal. In fact, you might notice that the title of the show is “aggressive” + “Retsuko.”

While certainly not intended for younger audiences, this show is a great gateway for beginner and intermediate learners because the majority of its spoken Japanese is the “daily life” type. You’ll find many of the words, phrases, and structures you’ve learned in Genki or other gateway textbooks in this show. And the subtitles utilise simple kanji for easier understanding!

2. Your Lie in April

Sure, this masterclass in emotion is full of musical-based terms like arpeggio and forte. But at its heart Your Lie in April (often referred to by its Japanese name, Shigatsu wa Kimi no Uso) is a slice of life anime.

This gives you access to more day-to-day speech sprinkled with occasional unique words and constructions that can boost your comprehension.

The premise of the show is the relationship between two young people. One is a piano prodigy who has lost his ability to play. The other is an eccentric young woman who loves violin but harbours a secret.

If you’re up for a little more challenge than the frequent daily mutterings of slice of life characters, you can try Boku no Hero Academia. The show revolves around Izuku Midoriya, who goes by Deku, as he strives to be a hero in a world where he is one of only a few born without inherent superpowers.

While you’ll still find plenty of common utterances—they are kids in school, after all—the show is underpinned by a more complex narrative that introduces intermediate and advanced facets of the language for you to practice.

Another positive of the series is that while it does contain many series-specific terms (which is typically something to be wary of), it handles them well. And you are unlikely to accidentally pick them up as bad habits. They’re almost exclusively in katakanized English, so you’ll be able to spot them quickly.

4. The Devil Is A Part-Timer

This show is exactly what it sounds like. What if the devil accidentally found his way to earth and had to get a job at McDonald’s to make ends meet? Thwarted during his attempt to conquer another plane, Satan and his main general are stuck in Tokyo and have bills to pay.

You may be able to tell from the premise that this show is going to be full of immersive Japanese. Breaking out of the typical high school setting, Hataraku Maou-Sama exposes your listening comprehension skills to wider Japanese society.

You'll hear language about businesses, eating out, public transit, and other helpful areas that you are likely to encounter frequently in your use of the language. The occasional addition of fantasy elements does more to flex your mental muscles and give you some language to chew on than it does to confuse you, which makes this series a solid choice.

If you crave real-life actors instead of anime, you may find yourself pleasantly challenged with Boku no Yabai Tsuma. It's a psychological thriller drama hovering within the intermediate category of listening comprehension.

A man who is having an affair is plotting with his lover to “get rid” of his wife. However, the day that he plans to make the move, she vanishes. The only hint is a couple of bloodstains on the floor. Maybe it’s fate. Or maybe it’s something more sinister.

Because the show relies heavily on its plot (and the twists that come with it), you’ll need to follow closely or check back on the subtitles from time to time in order to ensure that you’re staying on pace with the story.

That being said, My Dangerous Wife is a great opportunity to exercise your brain and scratch that crime drama itch with Japanese that goes beyond the day-to-day while remaining accessible and relevant.

For those who don’t yet feel confident enough to dive into an intermediate-level show, check out Time Taxi, or Suteki na Sen-Taxi. The Japanese here is accessible and suitable for those just starting out who want to level up their listening skills without having to relegate themselves to a simple slice of life show.

Goofy (and a little bit nosy) taxi driver Edawakare helps people to make things right by using his time travelling taxi to take them back to the places where they made mistakes. This whimsical feel-good series is accessible and easy to binge.

In many ways, Terrace House is similar to the hit American show Big Brother. That's why you can likely see how it’s great for listening comprehension.

A group of strangers (three men and three women) live together. And the show follows them as they get to know (and date) their peers. Its earnest take on the reality TV genre has earned it widespread acclaim, even internationally.

This is listening comprehension at its finest, with natural, unscripted conversations about life providing easy fodder for Japanese language learning. While the show was temporarily paused in 2020 due to coronavirus, it is still expected to release episodes in the near future, and past seasons are available.

If natural conversation intimidates you, you can start at an easier pace with Zannen na Ikimono Jiten. This is an accessible show that is basically a roundup of fun facts about animals.

Educational, fun, and a little bit quirky, this show is for kids. But it honestly provides great practice with a wide range of vocabulary. And also easy icebreakers and conversation starters thanks to its boatload of fun facts.

Did you know that dolphins can’t actually ever go to sleep or they’ll drown? They have to sleep with one side of their brain at a time!

If you’re listening to Japanese shows to challenge yourself or kick your learning up a notch from intermediate into the more advanced levels, Suiyou Dou Deshou is the show for you.

Its use of casual lingo and rapid fire conversation are great if you're ready to master the art of listening to Japanese speakers who are talking uninhibited. And its topics are engaging.

It is one of the longer-running Japanese series, having already aired for more than eight years.
The show follows two friends who adventure across the world and through Japan doing…well, interesting nonsense.

From having them learn to cook by making everything from scratch (including the tableware!) to visiting 88 temples in five days, their treks are legendary. And you won’t find more authentic Japanese on TV or on Youtube – they're famous enough to have their own channel.

Get Started With Japanese Shows On Netflix

So there you have – 9 of the best Japanese shows on Netflix, chosen with you, the Japanese learner, in mind.

Whether you are just starting out or trying to jump the final hurdles into native listening ability, TV is a great opportunity to diversify your experience.

Immerse yourself in Japanese TV, and don’t worry if you have to check the subtitles. Or even if you can’t look away from them. You’ll be boosting your Japanese knowledge, and before you know it, you won’t even need those subs anymore.

If watching TV is a bit much for you though, apply the StoryLearning® method and immerse yourself in stories at your level. These 6 Japanese books for learners will help you get started.