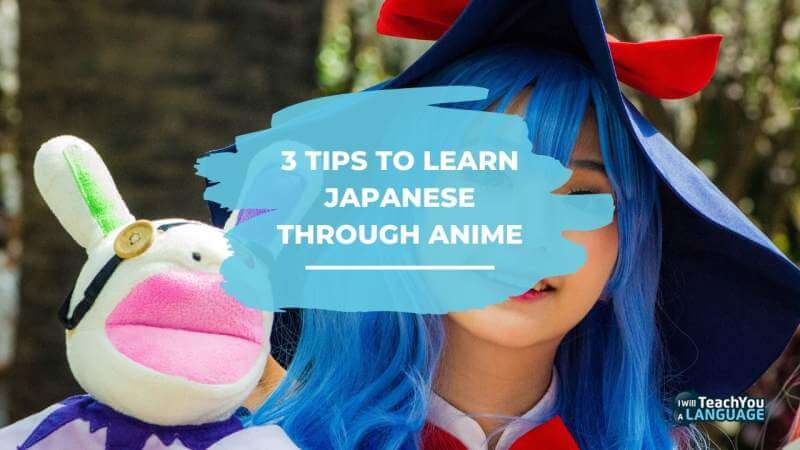 3 Tips To Learn Japanese Through Anime

Whether you’re just starting to learn Japanese or have waded through the trenches of kanji and inverted sentence order for some time now, you might find that one of the toughest areas to practice is your listening skills.

For many of you, access to native Japanese speakers is slim to none. And that means that when it comes time to actually have that Japanese conversation you’ve been practicing for, you might flounder and struggle with comprehension.

Thankfully, there’s an easy way to fix that! Enter anime. Japanese anime, short for “animation,” is either hand-drawn or computer-generated animated content. It’s extremely popular in Japan. And despite stereotypes you might have heard, it’s not just “for kids.”

Japanese people don’t view anime as “cartoons.” For that reason, you’ll find anime covering a nearly infinite array of topics, so you can dive into anything that strikes your fancy.

In this post, I'll show you why anime can be such a great tool to help you learn Japanese. I'll give you 3 tips to make the most of the anime you watch. And if that wasn't enough, I'll even share my top 5 Japanese anime series and movies with you.

Why Does Japanese Anime Help You Learn?

Anime provides one of the key features of successful foreign language learning: immersion. It offers you the opportunity to hear native language speakers talking at a native cadence, which is great for listening practice.

On top of that, you have visual cues—a story you can follow—that will provide you with helpful context and hints as you attempt to improve your listening comprehension.

Plus, it’s easy and fun to watch anime, which serves as a great motivator to keep at it. You just have to find out what happens to Kenichi in episode 13! This is why I teach and learn languages with theStoryLearning® method, because it's so much more fun and effective to learn through stories, not rules!

In addition to—or perhaps more accurately as part of—immersing yourself in Japanese audio practice through anime, you also equip yourself with an automatic system of stepping stones that will grow and change with you.

Tools To Help The Immersion Process

What I'm talking about here are subtitles and other video controls. If you’re brand new to listening to Japanese, you might find it overwhelming to watch a show with native speakers zipping through a conversation at regular speed.

Fear not. You’ve got some controls at your disposal to help, all thanks to the electronic nature of anime.

If you’re having a hard time discerning the words being said, most video players have the option to slow down the video speed. Try popping that down from 100% to 90%.

On top of that, you’ve also got the option to turn on subtitles. This is a great way to ensure you understand what’s being said while listening.

And it’s one of the best immersive methods. It allows your brain to understand while also hearing foreign words, tying them together via association with words you already know in your language.

As you progress in your listening skills, try returning the speed to 100% or turning off the subtitles.

Even if you don’t understand everything, letting your brain actively try to figure out what’s happening will be a huge stepping stone in boosting your listening comprehension.

You can try watching shows you’ve already seen if you’re just starting out. Or if you’re up for a challenge, try a new show whose plot you don’t know and see if you can follow along!

How To Learn Japanese Through Anime: 3 Tips

Because anime is in many ways a reflection of native Japanese, you’ll have plenty of opportunity to hear standard Japanese phrases and grammar used in context.

Anime provides a lot of useful phrases in everyday contexts that are much more similar to how you might natively encounter them.

Why? Because Japanese anime is made for Japanese people as the primary audience.

Keep an eye (or rather, an ear) out for things like formality changes.

Figuring out when Japanese people think it’s right to speak formally can give you a great view into when you might want to do the same.

You’ll also have a major opportunity to buff up your vocabulary. You’re going to be encountering a ton of Japanese words you’ve never heard before—and that’s great!

Pick out the ones that you think will be most helpful to you and add them to your list. You don’t need to memorize them all. Keep your expectations realistic so you don’t burn yourself out.

Be careful about the words you choose, though. Because anime isn’t real life, it can be goofy in a way that real speakers usually won’t be.

If you like Naruto, make sure that you don’t pick up on his catch phrase dattebayo. It doesn’t mean anything and is just a quirk of the way the writers decided Naruto should talk. So double check the words you choose to make sure you understand what they mean.

This is good for you too, because research will help you to practice and learn those words more quickly (instead of just writing them down as soon as you hear them and then forgetting about them).

Improve Your Japanese Listening And Pronunciation

One of the most helpful features of anime when learning Japanese is hearing intonation. Japanese speakers don’t stress the same parts of a sentence that English speakers, German speakers, or even Spanish speakers do.

Over time, by constantly exposing yourself to spoken Japanese, you’ll begin to develop an ear for the intonation and cadence of a Japanese sentence. Then you can try that out for yourself!

Some anime are better than others when it comes to listening comprehension. The first anime (and manga) some people have tried to use when learning Japanese (speaking from experience here) is Death Note—bad idea.

The topic of Death Note is very niche and specific. It revolves around highly complex criminal plots and rules. And that means lots of very specialised vocabulary that’s hard to follow for a beginner, like “international criminal police organisation.”

If that’s a topic you’re highly interested in, it may be worth it to check out Death Note. But if you’re coming in hoping to improve your Japanese on a basic, general level, try some other shows first.

That’s going to be more common in high school dramas than it is in stories with ghosts, dragons, and yes, even giant space robots (looking at you, Gundam).

If you’re just starting out and are aiming for simpler language that’s still useful, Shirokuma might be perfect for you.

The plot is about a polar bear who runs a café and loves talking to his friends, a panda and a penguin.

While it might seem childish, the show is actually a goldmine for casual conversation among friends, everyday topics (with bonus life advice!), animal terms, and even wordplay. The polar bear loves simple puns and pranking his customers.

The show is accessible and slow-paced, providing a relaxing but educational viewing experience.

If you’re ready to tackle something a bit more complex when it comes to casual conversation among friends, Nichijou is probably perfect.

Main characters Mio, Yukko, Mai, and Nano all speak with a very shorthand, very common type of casual Japanese that closely mirrors what you’d find if you spent time in a Japanese high school.

If this sounds like something that would help you learn at this stage in your listening practice, Nichijou is a fun show detailing the girls’ high school antics—which get pretty nonsensical in a very good way.

Have you ever seen a high school principal suplex a deer?

Yes, it’s the age-old classic. If you want to be the best like no one ever was, Pokémon (or by extension, Digimon, Zoids, Yu-Gi-Oh!, and similar titles) are a great way to immerse yourself in fast Japanese speech.

It's faster-paced than something like Shirokuma without delving deeply into complex language patterns, because the shows were made for a younger audience.

Breaking into intermediate Japanese and above is One Punch Man, a show about a hero who can defeat any enemy in just one punch. And how disappointed he is that everything’s over so quickly.

It follows main character Saitama as he tries to find purpose in his life. And get to the store before they sell out of shrimp tempura.

This goofy and much beloved show is a goldmine for standard Japanese phrasing in both casual and formal respect levels, making it a well-balanced listening comprehension tool.

From Saitama’s relationship with his pupil (and the casual language that follows) to his interactions with the super formal Association of Heroes (and the proper formality in his speech, of course), One Punch comes highly recommended and diverges away from the typical school-centric vocabulary of many slice of life titles.

Remember, anime is simply “animation,” not “cartoon TV shows”! The globally famous and incredibly well respected Ghibli films from Hayao Miyazaki are just about as solid as it gets when it comes to learning Japanese.

They present firmly native Japanese offered with standard line delivery. And thanks to a huge and varied cast of characters across the films, issues like formality, vocabulary, and structuring are all going to be varied and provide a well-rounded exposure to the language.

So there you have it – pretty much everything you need to know to successfully learn Japanese through anime!

Anime offers lots of advantages for you as a Japanese learner. You get to immerse yourself in a story, meaning that you're motivated to watch the next episode of the series. You learn without feeling like you're doing the work.

Your listening skills improve as you spend more time with the spoken language. And you can use built-in tools when you watch to support you as you progress, like subtitles.

You can also add to your vocabulary. And get to grips with tricky features of Japanese, such as formality or intonation.

The only real pitfall to look out for is the content and language of your chosen anime. Stick to series where you'll hear everyday, conversational language rather than anything too niche or fantastical.

All that's left to do is sit back, relax and enjoy one of the series or movies I recommended. Have fun discovering and learning through anime.