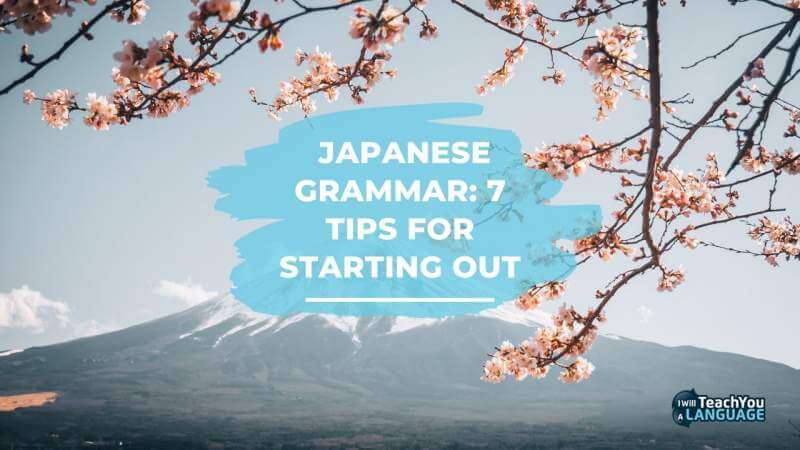 7 Simple Japanese Grammar Tips To Get Started In Japanese

When you’re just considering learning Japanese, it can be overwhelming to try to remember all the things you have to keep in mind.

You’ve no doubt heard people say that Japanese is a tricky language. And so you might think that it’s going to be tough to master grammar.

While it’s true that improving your language skills takes work, a couple of Japanese grammar basics form the basis of the entire language.

And if you can understand those, you’ll be well on your way to mastering this skill. You’ll pick up most aspects of Japanese best by immersing yourself in the language and developing a natural understanding of them.

That’s why you’ll likely take notice of a couple pieces of grammar right from the get-go.

Here are seven key Japanese grammar rules that are simple to remember and will make it easier for you to get a grip on the language fast.

Tip #1: Japanese Has No Plural

It can be tough to wrap your mind around how people can go through life without singular and plural. But just give it a try. It turns out that knowing whether you have one or more than one isn’t as critical as you might think.

In Japanese, there is no (regular) use of the plural.

In other words, whether you want to say “I saw a cute dog today” or “I saw a couple cute dogs today,” the sentence would be exactly the same:

If you’re really broken up about it and absolutely need to clarify that there were “multiple” of something, you can append –tachi to the end of a noun. But this is certainly not something that you’ll need to do every time you talk about something plural.

One of the most famous features of Japanese is the inverted sentence order, putting the verb at the end. This might seem confusing. But you’ll surprise yourself with how quickly this order becomes natural.

Take, for example, “I went to the library.” In English, this is represented by subject, verb, object: I > went > library.

Over time, you might find that talking this way actually proves useful. It helps you avoid confusion by keeping all your related sentence pieces together instead of sticking a verb right in the middle of everything you were trying to say.

You may be picking up on the idea that Japanese tends to use fewer words than English. And “you” is no exception.

If you’re talking to someone, it’s generally considered improper to directly address them as “you” (anata, あなた).

Typically, the better way to approach this issue is to use their name (or title), or just omit the whole idea of “you” to begin with.

It’s more polite to opt for either of the second two options, as using anata can come across as a bit too direct.

If you don’t know someone’s name, that’s okay. As you can see from the third example, you don’t even need it!

Tip #4: Japanese Particles Help You Show The Function Of A Word

Particles—that’s the ha, ga, wo, no, mo, de, ni, to, and so on that you see coming in between words in Japanese—might seem like they don’t do much, since they themselves don’t have meaning.

But instead, particles are a very important part of Japanese. Think of them like flags that mark what the pieces of a sentence are doing.

Take, for example, the particle no の, and let’s compare that to the particle ha は (pronounced “wa”) just to see how important these little guys are.

That’s nice of you to do that for him so he doesn’t have to! Maybe he had an assignment he had to do, but you helped him do it instead. But look what happens when we change the particle no to ha:

That’s a big difference, all thanks to a particle that has no meaning by itself!

You’ll learn some identifying features about each particle (for example, that no makes things possessive). Just give these small guys the credit they deserve.

Tip #5: Japanese Has No Future Tense

Other tenses (like progressive) and word pairs (like tsumori つもり, “to plan”) are the methods that Japanese chooses to use when indicating something you’re doing now or will do later, respectively.

Because “I’m reading a book” would be represented as Hon wo yondeimasu 本を読んでいますusing a new kind of conjugation called “progressive,” you don’t have to worry too much that your meaning will be misunderstood if you’re simply trying to use the regular present tense.

Tip #6: It’s Easy To Be Polite In Japanese

It’s a common idea that Japanese has very complex politeness levels built into the language. While you can’t deny that there are certainly a variety of politeness options to choose from, you don’t have to worry as much as you might think about offending people.

There’s no need to learn hyper-formal keigo in order to speak to your teachers. By addressing most people with the typical verb endings of desu/masu, you’re being polite already.

While there is certainly a time and place for the very formal keigo and kenjougo, these situations are more likely to crop up when you’re speaking with a company president, political figure, or other Japanese person of high rank—with whom you probably won’t ever have to speak very often.

Sticking with typical desu/masu is a reliable choice.

Tip #7: There Are 2 Kinds Of Japanese Adjectives

In English, an adjective is a word that describes a person, place, thing, or idea. It modifies, and it expands meaning.

But in the end, an adjective is an adjective; whether “blue,” “big,” “scary,” or “moving,” these words can all modify the word “ball.”

The reason this matters is for conjugation purposes; na adjectives are allowed to drop the na part if they come at the end of a sentence, whereas ii adjectives are not. For example:

By understanding these simple grammar rules, you’re equipped to navigate through almost anything Japanese can throw at you. So you can ignore the grammar villain, telling you that you need to master all advanced grammar before you can speak!

The old maxim is true – practice does make perfect.

As you continue to immerse yourself in language, keep your eyes and ears on high alert. See if you can spot these grammatical pieces being used. This is exactly what you learn how to do as part of the StoryLearning® method.

You could use podcasts in Japanese for example, to help you get used to these key features of Japanese grammar. Or try out parallel texts in Japanese to learn Japanese by reading.

You’ll no doubt begin to pick them up with ease. The good thing about grammar is that, even when it's very different from English, it's usually pretty consistent.

In spite of exceptions, you'll hear and see the key grammar over and over as you make daily contact with Japanese. So time to get started with Japanese! And if you need a bit of help on your journey, Japanese Uncovered is here for you.