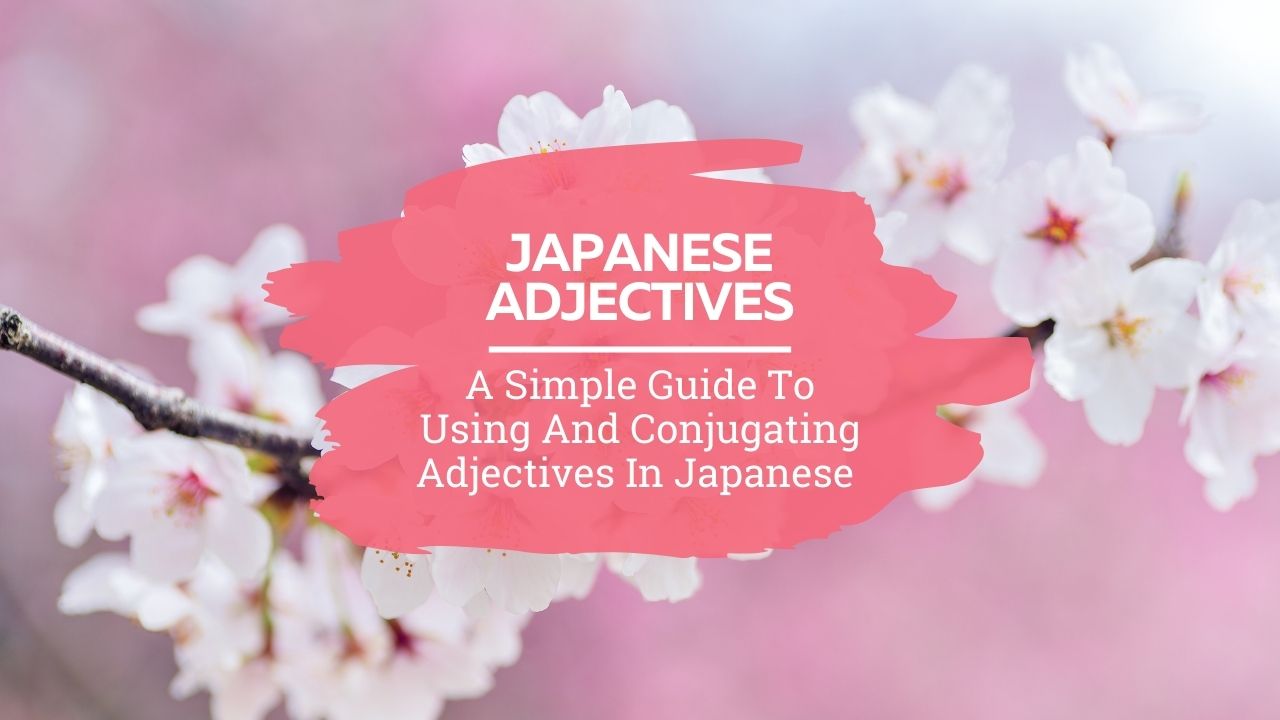 Japanese Adjectives: A Simple Guide To Using And Conjugating Adjectives

When you learn Japanese, you've got a lot on your plate like learning a new writing system, so you may not have given much thought to Japanese adjectives.

No matter what language you grew up speaking, you likely understand—whether you know it consciously or not—how to use adjectives.

While the many languages of the world have many different approaches to using adjectives in sentences, they are common tools that should not be unfamiliar to you.

And in fact, Japanese is so consistent in how their adjectives function that you may find yourself quickly adding dozens or even hundreds to your vocabulary and sentences in no time!

What Is An Adjective?

An adjective is a word that describes. They are used to offer more information or detail about a noun, which is easily identified as a person, place, thing, or idea.

Even if you can’t immediately point to an adjective in an English sentence and say, “That’s an adjective!” you likely innately understand not only what they are but also how they are used.

Words like “blue”, “big”, “scary”, and even “comprehensive” are all adjectives because they describe something.

Adjectives are not quite the same thing as adverbs, though! Adjectives only ever describe nouns, which are people, places, things, or ideas.

Adverbs, on the other hand, only describe verbs, or actions (they can sometimes describe other words like adjectives, but they will never describe a noun). A big chunk of all English adverbs end in -ly.

Try picking a common noun, like “dog” or “person.” Then stick a word in front of it, like “engaging person.” If it works, you’ve got an adjective!

How Japanese Adjectives Are Different From English Ones

What’s different is how they function.

Japanese breaks its adjectives into two categories that are used slightly differently in sentences.

The good news is that like in English, adjectives generally show up in the same location: before the word they are describing (or at the end, in sentences like “The car is blue”; this type of sentence is called an “X is Y” form).

The Types Of Adjectives

English has only one type of adjective—that is, an adjective. In Japanese, however, adjectives are broken into two different types: i-adjectives and na-adjectives.

It’s important to be able to differentiate between these two, because knowing which category they fit into will determine how to conjugate them and use them in a sentence.

Let’s take a look at some of the most common i-adjectives you’ll use in Japanese:

Na-adjectives tend to be where new speakers start to get confused—but don’t worry, there’s an easy explanation.

We say that na-adjectives end in na, but that might have been a little bit of a lie. Rather, the na that is part of these adjectives is a particle (much like ha, no, wo, and te, some or all of which you may have already learned) that connects the word to the rest of the sentence.

So if you look in a dictionary, you will not usually see na as part of the entry for the adjective. That confuses many new learners!

Na-adjectives can end in i, so it is important that when you learn an adjective for the first time, you identify which type it is.

Here are some of the most common na-adjectives you’ll use when you speak or write Japanese:

When an adjective is used in a Japanese sentence, the type of adjective that it is will determine how to change it.

Good news about i-adjectives if you’re speaking in the present tense—you don’t need to change anything! I-adjectives are ready to go as-is; simply insert them into the sentence before the word that you are modifying, like so:

Past tense can become a little tricky—but only when you’re coming in unprepared. When you want to change a sentence of the “X is Y” variety (like “It is blue”) to past tense, your first instinct might be to change the verb, like we do in English.

So “it is new” becomes “it was new.” However, in Japanese, it is actually the adjective that changes when you’re using an i-adjective. That means you have to conjugate the adjective.

Thankfully, this is simple. Take the “i” at the end of the adjective and replace it with the following options, depending upon what you would like to say:

This type of conjugation only happens when sentences are of the “X is Y” form. Any other time you use an i-adjective, just plop it in the sentence as-is and you’re off to the races!

Na-adjectives, by contrast, are more consistent. The reason that na-adjectives take the na, as mentioned previously, is to join them to the rest of the sentence. Why? Because they essentially function as nouns.

If you are using a na-adjective as part of a sentence (and not in the “X is Y” form), stick it in, add na, and you’re all done.

When you are using the “X is Y” form, like a noun, a na-adjective is simply conjugated with desu. You may already know how to conjugate desu, which makes na-adjectives easier!

Just as you replaced the i in an i-adjective, replace the na in a na-adjective and conjugate desu instead.

A special note should be made for the i-adjective ii. This word, which means “good” or “okay,” can be a little confusing because it’s an i-adjective made only of, well, I’s.

*This is not correct—try to remember that this adjective has special rules.

The proper conjugations for ii are:

The reason that ii is conjugated in this way is because one alternative way of saying good and reading the kanji 良いis yoi. You can use them interchangeably, just know that yoi is a bit more formal.

Adding Adjectives To Your Regular Vocabulary

Adjectives, like any new part of your Japanese language repertoire, may seem daunting at first.

However, they follow easily predictable rules, and with a little practice, you’ll be livening up your speech or writing in no time.

Remember that the best way to become skilled at using adjectives is to immerse yourself in native speech and just give them a try!

So make sure you're listening to Japanese podcasts, watching Japanese shows on Netflix and reading Japanese books.