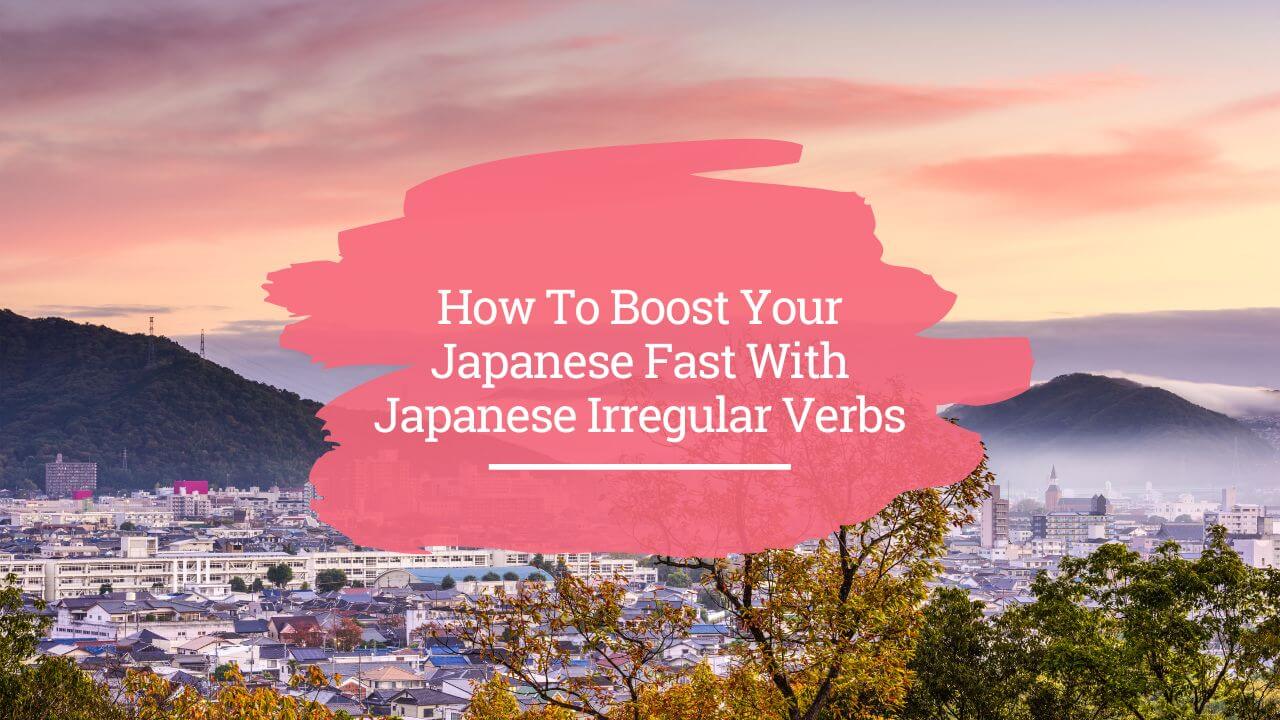 How To Boost Your Japanese Fast With Japanese Irregular Verbs

When you learn Japanese, or any language, you'll quickly see it's full of thousands of words in each of a variety of categories: nouns, verbs, adjectives, and many more.

If you are approaching Japanese from a language that doesn't do verb conjugation, the concept of a Japanese irregular verb may be foreign to you.

That’s okay—thankfully, Japanese irregular verbs are pretty few and far between when it comes to total number.

However, you often use the ones that do exist daily, and in fact, they’re some of the first verbs you might learn. Learning how these irregulars work will open up hundreds of new structures for you to use in your writing and speaking.

To dial into the basics as a quick refresher, a “verb” is an action word. Think of words like “jump”, “decide”, and “be” when you’re thinking of verbs. They’re what the other parts of the sentence are doing or being impacted by.

What Are Japanese Irregular Verbs Anyway?

In Japanese, verbs change their form based on how they are being used. For example, the verb taberu (to eat) becomes tabemashita as “ate” and tabetai for “want to eat.”

This is Japanese verb conjugation, and it is how you can manipulate verbs to communicate your intended meaning. English does the same thing: “eat”, “ate”, “will eat”, and so on.

In Japanese, the way that you create these forms is very consistent and predictable, and all of the verbs that obey these rules are called regular verbs. From there, you can break verbs into two big sets: godan and ichidan, or -u and -ru verbs.

Any Japanese verb that ends in -ru is an ichidan verb. To conjugate a -ru verb, simply chop off the -ru and add -masu.

That’s all there is to it! Ichidan verbs are considered to be the easiest variant of Japanese verbs to conjugate. They always follow the same rules.

Japanese verbs that end in -u are godan verbs. This might seem a little confusing, because every single verb in Japanese ends this way. The difference is that u is a hiragana symbol all by itself: う.

Some verbs that appear (in English!) to end with -u actually end with -ru, which is a completely different hiragana letter: る. That’s why it’s a lot easier to identify a godan verb in written Japanese.

In short, any verb that ends with -u that is not a part of -ru is going to be a godan verb. That means words that end with -ku, -tsu, -mu, and more are all godan, and they’ll all conjugate the same way. Simply change the -u to -i and add -masu and you’re done!

These are the rules for godan verbs. There are a couple words that visually end in -ru but are still godan verbs (think kaeru 帰る(to go home), shiru 知る (to know) or kiru 切る (to cut)).

You’ll just need to learn these special cases so that you remember to conjugate them as godan verbs. The good news is that as they're common words, you'll come across them often as you read or listen to Japanese.

The vast majority of Japanese verbs follow the rules above depending on whether they’re godan or ichidan verbs.

However, when a verb doesn't conjugate according to these rules, you can consider it irregular. It follows its own unique set of rules, and in order to master an irregular verb, you must simply learn it separately.

The good news is that Japanese is sparse in terms of irregular verbs!

There are two “main” irregular verbs in Japanese—in fact, some people assert that these are the only two! Take that grammar villain!

The first is suru, which means “to do.” It’s by far the single most common verb in all of Japanese, because it is often attached to the ends of other words to create verbs.

Benkyou suru 勉強する (to study), shigoto suru 仕事する (to work), and kekkon suru 結婚する (to get married) are just a few of the more than 13,000 words in Japanese that can take suru to become verbs.

If suru were a regular verb, it would become sumasu if it were ichidan and surimasu if it were godan. However, the true -masu conjugation of suru is shimasu. This is what makes it irregular.

In order to master the use of suru, you will need to learn all of its conjugations one by one.

As you can see, suru conjugates in unusual and non-standard ways. Pay particular attention to dekiru, which does not even appear to be the same word!

Exposure to Japanese is key here, through reading for example, which is exactly what you learn to do here at StoryLearning®. By reading books in Japanese, you'll come across the irregular verbs and their conjugations over and over again. So they'll soon become second nature to you.

The other primary irregular verb is kuru. This is yet another very common word, and it means “to come.”

Like suru, it is sometimes appended to the ends of other words to form a joint verb. You will need to memorize kuru on its own, because it would conjugate to kumasu as an ichidan verb and kurimasu as a godan verb. However, its base -masu form is kimasu.

A special note on this one: there really isn’t a Japanese passive form of “come” in typical speech. However, korareru is often still used in this manner to express regret or inconvenience.

For example, if you specifically didn’t invite someone to a party because you don’t like them but then they came anyway, korareru. Their coming was done “to” you, in a sense.

Like suru, using kuru comes down to noticing and exposure. Pay special attention to how the “ki” sound changes to “ko” in some conjugations, like konai.

What About Other Japanese Irregular Verbs?

While suru and kuru are the two irregular verbs that everyone talks about when thinking of Japanese, some other words behave in unique ways too.

Mostly, you will see this happen within the hyper formal register of Japanese, where words begin to take very unusual shapes.

For example, desu can change to de aru or even de gozaimasu, and some other words are replaced completely. If you're ready to tackle the “irregular” verbs within keigo (formal language), they are:

You may not realise that you already use some of these hyper formal words (have you ever said oyasumi nasai, or “goodnight”?).

However, understanding the proper usage of these specific words is an entire lesson in and of itself.

Thankfully, your standard -masu/desu verbiage will be more than sufficient for almost all of your Japanese needs, so when it comes to irregular verbs, stick to mastering suru and kuru first.

Japanese is an ever-changing language, and even though it tends to be very consistent, some elements remain extra special. Irregular verbs are one such aspect of the language.

So, take the time to learn how irregular verbs work, and practice them on friends! To get ready for using these Japanese verbs when you speak, make sure you read and listen to lots of Japanese. You'll run into these verbs all the time as they're so common.

So, now that you know kuru and especially suru, your options for expression yourself have just increased—by the thousands.