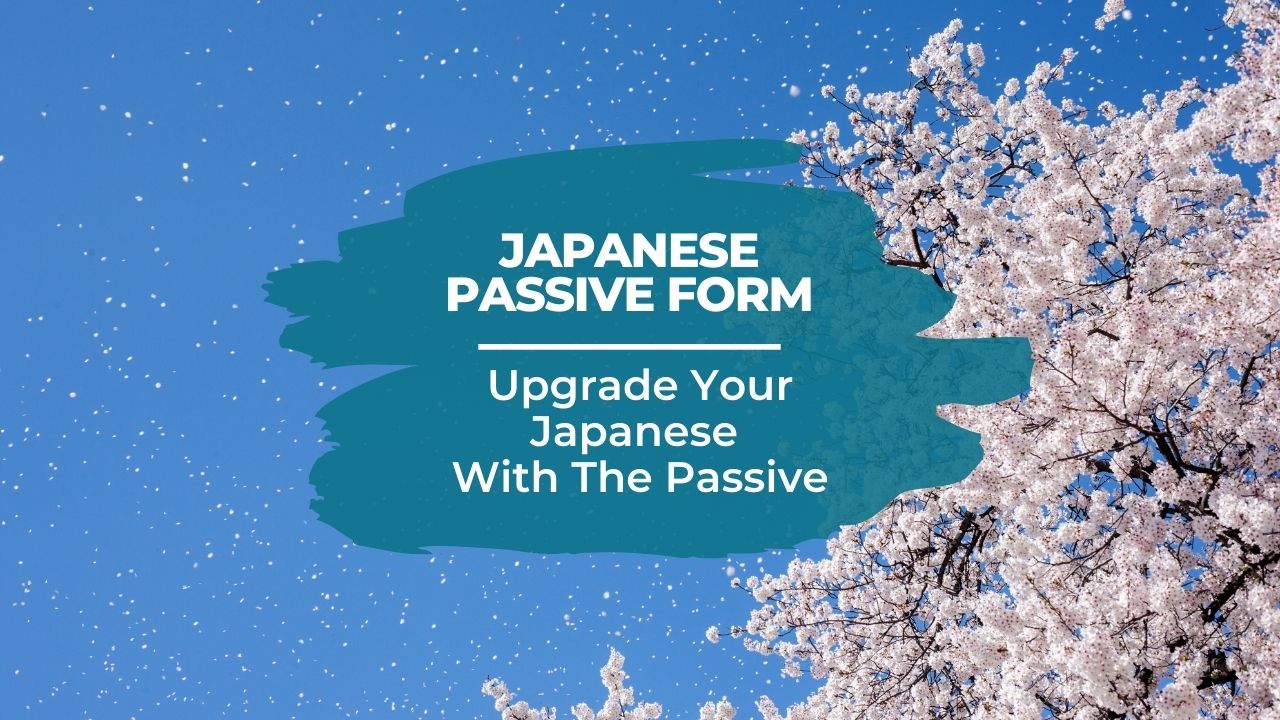 As you progress through your Japanese learning, you will likely begin to crave nuance in the way that you speak and write.

You may find it frustrating that you're stuck with basic sentence structures to convey complex ideas. Thankfully, the Japanese passive form is one of the most versatile options for you to begin adding further detail and context to your language. And it's simple to create.

As an added bonus, learning the passive form now will also better equip you to master the complexities of the highest formality, keigo/kenjougo, later on, because passive conjugation is also an important part of this way of speaking and writing!

So what you’re learning now will come in handy in many ways. Let's get to it.

In English, a passive is a passive – whether the cake is being eaten or the dog is being bathed or the baseball is hit, passives work the same way.

Don’t worry, they’ll all be conjugated the same way later!

Let’s take a look at some examples. See if you can spot how the action directly happens to the subject being talked about. (Sometimes, the “general population” is the one doing the acting to the person or thing, and they will be assumed and not written directly in the sentence, just like in English!)

Unlike in English, Japanese has indirect passives. Take some time to practice this idea, because it doesn’t have an English equivalent!

Indirect passives in many ways function the same way that placing stress on a certain part of a sentence can in English. Remember that passives are all about focusing on what happened to someone or something.

In English, one way you can emphasize that something happened to you specifically is to place vocal stress on that part of the sentence.

If you’re particularly put out by the fact that you were trying to get somewhere when a car inconveniently stopped you by coming to a halt directly in front of you, you might emphasize “in front of me” in English, as if to say, “In front of me. Me! Of all the people, it had to be me right at that moment.”

It’d be like saying, “I was in such a hurry, and this car was just crawling through the intersection. I was trying so hard to just get by, but then that car stopped…right in front of me.”

How This Works In Japanese

In Japanese, this tonal change to emphasize doesn’t happen. Instead, Japanese will choose to use the passive form, even though the sentence itself does not appear to be passive, to emphasize an action happening to you. You are the receiver of the action, even if the sentence is not worded that way in its English translation.

The majority of the time, an indirect passive will be about a negative thing that happens. However, on rare occasions, it can also talk about something good:

In Japanese, this would be worded as “right next to me, I was sat by my crush.” It doesn’t make much sense in English because English speakers do not have an equivalent structure.

But this is a great time to use the passive in Japanese.

The passive form is relatively simple to create in Japanese, and whether you are using a direct passive or an indirect passive does not matter – the conjugation will be the same.

That takes some brainpower off of your plate! Learn the passive and you’ll be set, not only to add more nuance to your speech and writing but to learn keigo and kenjougo—the two most formal forms of Japanese—later. Talk about utility!

As with many forms of verb conjugation in Japanese, you will need to know whether the verb you’re working with is an u-verb or a ru-verb.

Ru-verbs are the verbs (ending in ru) that you conjugate by removing the entire ru part and adding -masu instead. Think of some of the following as common examples:

U-verbs are conjugated not by removing their ending, but rather by altering it. Remember that not all verbs that end in ru are ru-verbs; some are u-verbs!

Unlike ru-verbs, you cannot just drop the end of the verb and add a new one to make a passive. Instead, you must change the final sound to the “a” sound that corresponds to the final hiragana used in the word.

Do you remember learning your hiragana in sets like ka/ki/ku/ke/ko and ma/mi/mu/me/mo? The reason you learn them in “columns” is so that when you need to do conjugation, you can go back to that hiragana’s “column” and choose a different option.

In the case of a passive u-verb, you’ll need to choose the “a” option from your hiragana’s column.

Two particular verb endings among u-verbs can be particularly tricky, and our previous example utau is one of them. For words ending in hiragana u only (and not the “u” sound of another hiragana, just the actual singular vowel u), you cannot just go to the vowel column and choose “a” instead. Rather, you must use wa.

The other challenging conjugation is when an u-verb ends with tsu. Remember that tsu is part of the ta/chi/tsu/te/to column, so you will need to choose ta:

Many new learners will choose something like “utsuwareru” or “utsureru” because they are not sure what to do with tsu.

As always, two of the most common verbs—suru, (to do), and kuru, (to come)—are exceptions to the rule. You are best off simply learning these as individual passive words rather than trying to figure out how to conjugate them each time.

As you can see, these do not appear to follow the same rules as other passives, so you’ll need to break out your rote memorization for these two. Suru works as a passive whether it is on its own or alongside another word.

Now that you have tried your hand at creating passives, don’t panic if you still take a little while to put each one together. Learning Japanese—or any language—isn’t an overnight endeavor.

Remember that the best way to learn Japanese is to immerse yourself in the language as much as possible, preferably through stories! Watch some Japanese TV and see if you can spot each time anyone uses a passive conjugation. Or read Japanese books.

Challenge yourself to talk about what happened to you during the day instead of reporting what you did. This way, you have the opportunity to practice passive verbs more often!

Adding the ability to create passives into your grammatical vocabulary provides an entirely new level of nuance for your speech. And because Japanese uses indirect passives as well, you will be able to express your true feelings more naturally than ever before!

Keep going, and add in passives little by little until they become a regular part of your dialogue and writing.