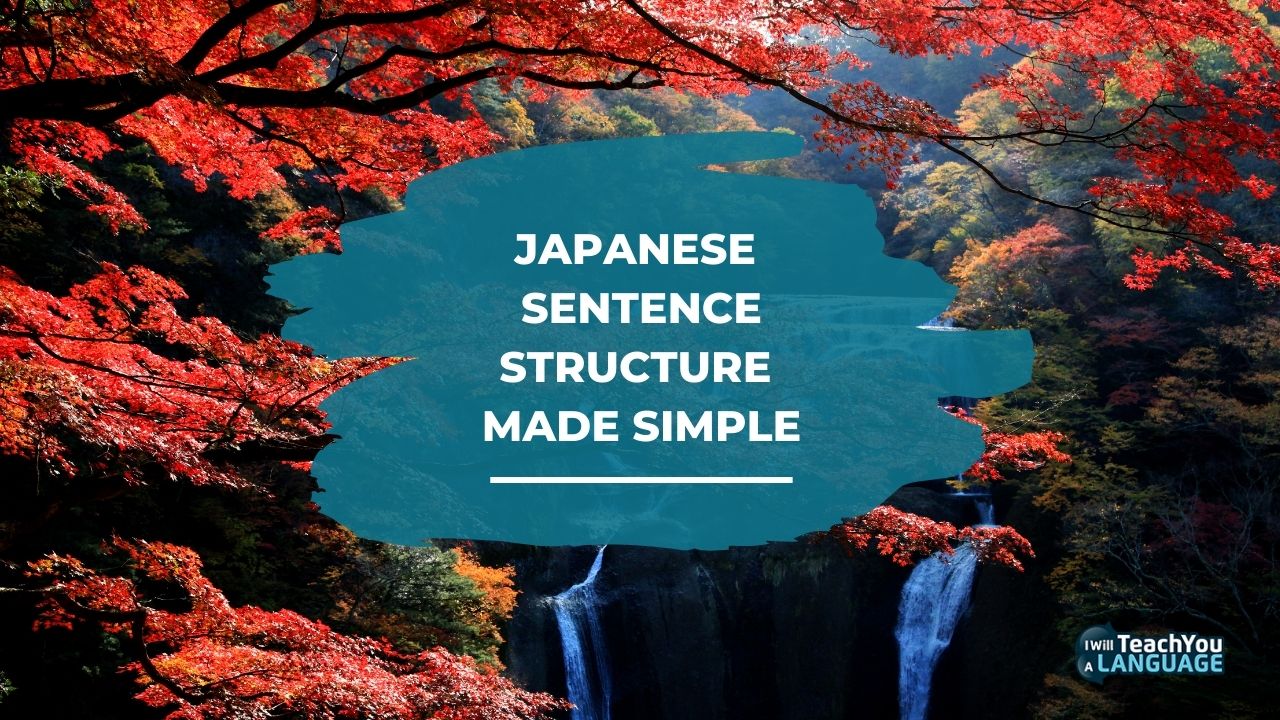 If you’re learning Japanese, one of the first things you might have noticed is that figuring out what’s being said isn’t as simple as making a word for word comparison, in order.

In fact, if you write a Japanese sentence down and then try to map English words onto it in order, you’ll probably come up with something pretty unintelligible.

The reason for this is that unlike English and many other languages, Japanese sentence structure inverts the common word order many of us are familiar with.

The good news is that Japanese sentence structure is very consistent. So once you get used to the “backward” word order, it quickly becomes second nature.

In order to understand how sentences are structured in Japanese, we first need to wrap our minds around word order, particles, and verb placement. Let's get to it.

One of the most notorious features of Japanese is the order in which it places verbs in a sentence. Whether you are just getting started or have been learning Japanese for a while, you have likely already come across the concept of sentence final verb usage.

In Japanese, verbs come at the end of a sentence. This is a large part of the reason why Japanese sentence structure is considered “backward” compared to English and many other languages. Take the following sentence as an example:

In English, “I” serves as the subject, “went” is the verb, and “to the library” finishes off the sentence. In Japanese, this sentence would look significantly different.

In Japanese, toshokan means “library,” and ikimashita is the conjugated form of iku (to go). This means that this Japanese sentence reads as follows:

This placement of verbs at the end is characteristic of the Japanese language. And it happens almost all the time.

Even if you are considering joining two sentences (e.g., “I’ll eat a hamburger, then I’ll brush my teeth”), each of these sentences within the larger construction still ends with its own verb in Japanese. Or, in other words:

In all of these examples, you can see that “go,” “eat,” and “brush” all end up at the conclusion of a sentence or thought, while English tends to frontload these ideas.

In many ways, the reason that Japanese and English are considered backward in their sentence structure is because of their unique methods of information loading.

English puts the most critical pieces toward the beginning (such as the verb), and supplemental details go at the end. We can see this at work by expanding our previous example about the library:

The two most important details in the sentence are the subject and verb: “I went.” The next most important piece of information we want to know is where you went. So “library” makes an appearance.

While understanding that you went to the library to study is important, the sentence still works fine without “to study”. So it’s relegated to the end, where the least important details go.

Not so with Japanese! In fact, you may find that Japanese frontloads a large majority of supplemental information, giving you as much detail and context as possible before presenting you with the main thought (verb).

As per the example:

What’s the first thing you see in this sentence? The very thing that English threw all the way to the end! “For the purpose of studying” leads the sentence for context, followed by “library” and then “went.”

You may begin to see the “backwards” idea people often talk about regarding Japanese. Because if you read either one of these example sentences backwards, you’ll get the preferred sentence order of the other language.

One feature of Japanese that also plays a part in how—or rather, why—Japanese is ordered the way that it is comes from the function that Japanese particles play in a sentence. Particles give further information about how words are used.

In the example about the library, the verb iku (to go) is used alongside the particle ni. Ni has no translatable meaning, but it goes along with words that indicate movement. So in some ways, you could consider this particle to mean something like “toward” or “to.”

As a particle, ni must come before the verb that it is linking another word to. For this reason, we really have no choice but to put the verb at the end of the sentence, since the word that ni is giving context for must by nature come before it. These sorts of rules are what push verbs to the end of a sentence.

Word order is not the only feature that makes Japanese sentence structure stand out. Another common—if overlooked—aspect of Japanese sentences is that they rarely actually contain all the words and ideas that are being used or referenced.

While English utilizes implied ideas (like saying “boy it’s cold in here” to suggest that someone turn the heat up), Japanese will directly omit words that English must include.

In English, this is impossible:

The literal Japanese translation of this sentence is “Library went.” What it means is “I went to the library.”

If we tried to omit the subject of an English sentence, we would really get some heads turning. “Went to the library”? Who? You? Your sister? This structuring may sometimes happen in slang or quick conversations, but it is not a staple of English sentence generation.

By contrast, Japanese relies constantly on this subject omission.  And it is considered a bit unusual to belabour your sentences by always adding “I” (私, watashi) to them. You can carry on a fluent conversation with a friend in Japanese without ever using the word watashi, but you will have communicated “I” dozens of times.

Over time, you’ll begin to get a firmer grasp of organizing your Japanese sentences. And placing verbs at the end will become second nature.

Still, some areas remain common slipping points for new speakers. And adjective conjugation is one of them. English structures its use of adjectives and tenses differently in a sentence. And this can cause some confusion for new Japanese learners.

In English, if it’s cold outside, you say, “It is cold.” If it was cold yesterday, you say, “It was cold.” The English sentence structure changes the tense of the verb to reflect the timing. However, Japanese approaches this issue very differently.

In Japanese, if it’s cold outside, you would most likely say, 寒いですsamui desu, which translates to “cold is.” Where things start to get a little unusual compared to English is that if you want to talk about how cold it was yesterday, you’d say 寒かったですsamukatta desu.

The desu (is) part remains present tense, and what actually changed to past tense was the adjective, not the verb! This slight variation in structuring tense within a Japanese sentence when it comes to adjectives is a common misstep. And most new learners will opt for samui deshita—because that’s how it’s done in English.

How To Master Japanese Sentence Structure

Between remembering where to put words and keeping track of intentionally omitted words, cobbling together a Japanese sentence can seem like a daunting prospect.

Keep in mind, though, that despite how different Japanese is from English, it's very consistent in the way it handles its grammar. In fact, many people would say that it’s much more reliable than English!

This means that with practice, you will develop a good understanding of how words function. And putting them in the right location will become more and more like a habit and less like a challenge.

One of the best ways to continue to practice and understand Japanese word order is by immersion into the language. Listen to native Japanese speakers and take note of where their verbs are—even if you don’t always understand what they mean.

Try your hand at listening to Japanese TV or songs and spotting the parts of a sentence. Watch movies with subtitles and take note of all the times that important words seem to be completely left out.

And of course, apply the StoryLearning® method and get your immersion through stories. As you read Japanese you'll notice the features you've learned about today, and your brain will get used to them.

And above all, remember that learning Japanese is a process! With these things in mind, you’ll boost your Japanese knowledge naturally. And improve your ability to build sentences in no time.